Hey there! New to gardening and I have a question for anyone with experience growing strawberries. I planted about 20 strawberry plants last year and about a dozen made it through to this year. I’ve actually had pretty good luck keeping the bugs and other animals away but I swear, weeding this bed is a full time job. Any tips on keeping weeds down? Any way to weed more efficiently than just pulling by hand?

I didn't have time to weed for the last week and this morning it looked like this! Took me two hours to weed. Any help is appreciated! 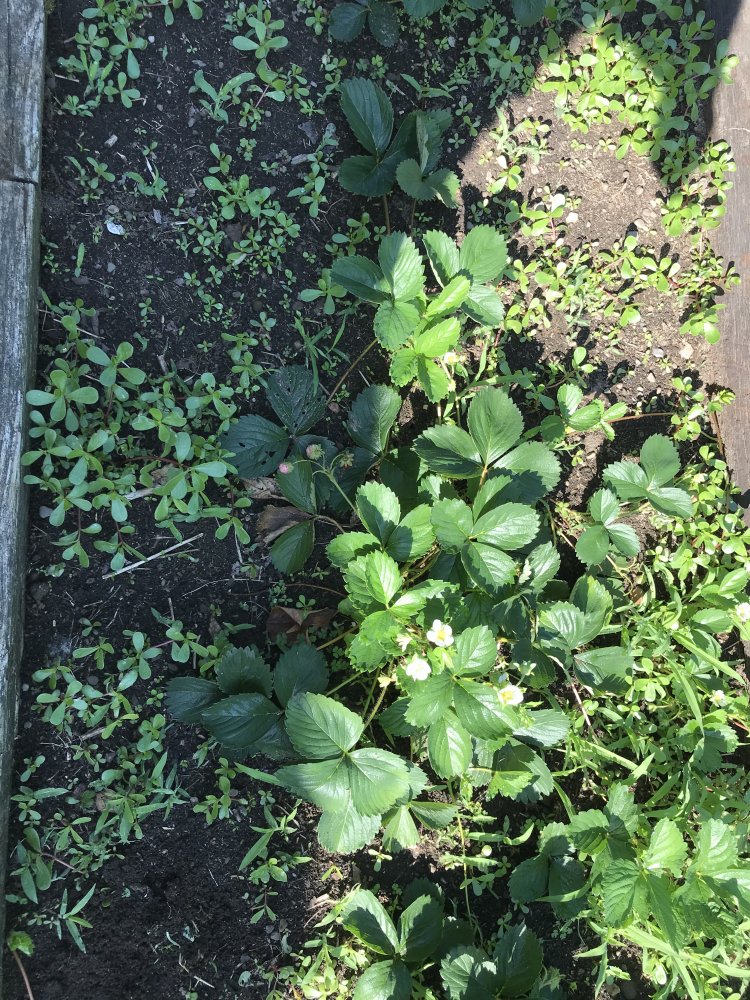 i've grown strawberries for enough years in many kinds of gardens. if the deer didn't keep eating them i'd have thousands of more plants than i have now.

in the first year of planting cardboard and mulch will go a long ways towards smothering and covering the soil. put holes in the cardboard where the plants are going to go. use a few layers of cardboard and overlap the seams by 8 inches or so. this way the only weeding you need to do for that season is right around the plants themselves. use only plain or cardboard with as little printing on it as possible (and black ink if there is any printing at all). beware using any cardboards with shiny surfaces as that can sometimes be a thin plastic layer which makes a mess once the cardboard itself is eaten up by the worms/etc.

after new runners have taken off and started to get rooted in the mulch/cardboard leftovers then it does become a bit more of a challenge, but topping off the mulch can help to suppress weeds from sprouting and also make it easier to get weeds out before they get too deeply rooted. if you want an organized planting with plants every so many iinches then you can remove runners or train them to go to certain spots and there they can root. i've taken small pots and used them to root runners so i can later transplant them around, but in recent years i don't even bother to do that at all, i just remove whatever runners aren't needed that season instead.

at the moment i have a large strawberry patch that will need some weeding but once the strawberries have filled it in the amount of weeds is less, but also harder to get at because you do need to work around more plants and find all the weeds. a low stool to sit on when weeding is nice. i have a ground pillow that i sit on.

strawberries have a picky edge on the leaves so you want to wear gloves and a long sleeved shirt when weeding. i use a large dull knife to help remove some weeds close to plants. strawberries don't have deep roots so you may not want to dig too much but for certain weeds you do really want to get all the roots out so here or there you might disturb a plant a bit more than desired. water the patch when done to resettle the plants.

in the end, my attitude towards weeds changed when i started keeping worms in buckets and got to know how to take care of them and what they did for the gardens. by thinking of weeds as future worm food, drying weeds out by leaving them on the surface in the sun, and then noticing which weeds were more problems than others and how to take care of those too so they too got turned into worm food.

for larger gardens having a good stirrup hoe makes weeding easier up and down rows, but the fine weeding close to plants still needs to be done more carefully so no matter what there is some labor involved going along and finding the weeds hiding under then plants. as the gardens get growing and shading more of the soil then there's less to weed but it does still need to be done. just part of the gardening. the stirrup hoe if used will also help in another way in that it doesn't move as much of the topsoil around and the advantage of that is that it doesn't move seeds in the soil around to where they will be in their germination zone. it is one thing nice about no-till/low till gardening that happens after you get a garden established and going for a number of years you can gradually reduce how many weeds will sprout (but that isn't completely zero because weed seeds do blow in on the wind or rains or come along from animals).

as you learn about which weeds are the worst and get rid of them then you can work on the other weeds which aren't so bad and some you can eat so they become a crop or more worm food.

some of garden learning is to determine how much time you have before a weed starts setting seeds and if those seeds are viable or can become viable after you've chopped a weed off and left it on the ground to dry out. some weeds have very tiny seeds and so if you see them starting to flower then you would want to get those weeds chopped back immediately. others it may take a few days before they can develop seeds so you have a bit of leeway. other weeds i will leave alone longer because i can pull the seed pods or stalks off the weed and just put those in the weed pile (instead of the entire weed). depends upon how much time i have that moment.

a bit of a rambly mess of a post, but this is about what i do.

Thank you! I appreciate all the great advice. I’m brand new to gardening so feel free to ramble away! I need all the help I can get.

Strawberries and weeds attract each other. Just spent an hour weeding a very small strawberry patch that had grass it it. I always wonder IF they are worth it. Especially since I only have a few, my wife keeps them ate before I get home.. only way I appreciate them is pick and eat.

seedcorn said:
Strawberries and weeds attract each other. Just spent an hour weeding a very small strawberry patch that had grass it it. I always wonder IF they are worth it. Especially since I only have a few, my wife keeps them ate before I get home.. only way I appreciate them is pick and eat.
Click to expand...

the patch here is surrounded by many feet of mulched area and so we don't have the regular lawn types of grasses or crab grasses happening any longer. the only grasses in this strawberry patch are a very fine bladed type of grass. i don't know what kind it is but it is very hard to eradicate completely. luckily it doesn't spread by stolons/roots but remains in a clump, but those clumps are very hard to fully get rid of. i should look up what the name of it is since i have time today (raining cats and dogs...).

it is much easier after a few years to just start over in a new patch than to try to get some grasses out because of how they spread. normally it is worth replanting anyways because as strawberries age they don't bear as well (after the third year get them replaced). you can tell by how long the crown is on most strawberries if it is older or not.