digitS' said:
Yesterday was the first harvest of the shell peas.

Took out one Yukon Gold potato plant. I had halfway vowed not to grow that variety again after it had performed poorly for a couple of seasons. But, the spuds are in a different garden this year and it's one of DW's favorites.

I'm wondering if my potatoes are producing very well. The tops are huge and have blossoms on them, I don't remember the plants being that big before they are red Viking We have never grown before maybe that it. I guess dig up a hill and see is the only way to know for sure. Your zucs must be a few days ahead of ours, we haven't harvested any yet I am thinking this weekend though for sure. I caint wait for zucchini fritters.

My potatoes flowered a couple of weeks ago, @Collector . I don't know if the heat then burned the flowers off, or what. I don't think they have much longer since they are earlies and the harvest "should" begin so I can begin using their space for something for the fall.

The new garden location may be a problem for my old schedule.

Two days between a 5 inch Gold Rush zucchini and it growing to 10 or 11 inches. And, there were a few others: 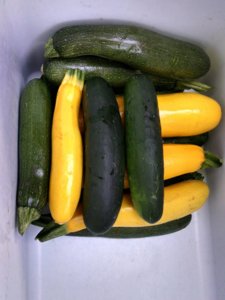 What is that, you say? There are 2 cucumbers?

Here's some of the potatoes: 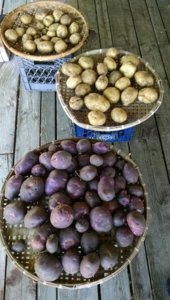 These are some of the Yukon Gold and Viking Purple. We had a few of the Red La Soda in addition to a few Yukon Gold earlier. Will dig more of everything soon.

This is from a different garden than in past years. I was truly ready to give up on the Yukon Gold, altho they are DW's favorite. They had miserly production in the other garden where I grew them 3 or 4 times. Why they did much better out in the heavier gravel of the big veggie garden rather than in more fertile soil and pea gravel in the other garden, I don't know.

The Viking Purple has been the most productive variety several times. Admittedly, I haven't weighed anything this year - growing them in a 45' row instead of by the square foot, in a bed. Still, they have performed as usual, altho some have split. I don't know why that happened.

The Red La Soda look fine but are quite small tubers this season. Wow! different location and everything is a little different in the spud patch.

Lots more to bring home over the next few days. Bush bean seed was sown in place of these but I'd better stop doing that. There are plenty of beans planted as a 2nd crop and this is about 15 days after what I have thought as a safe date for beans. An early frost and there goes those things! I'm hoping to have some decent transplant weather real soon and will move some Asian amaranth plants out there.

ReBar and a hammer and a good lot of time sitting on a stool and driving it down in a multitude of directions, @thistlebloom !

Actually, I wasn't able to determine what I had accomplished below ground other than the cessation of the gopher activity in my garden.

Looking over that last post, I made a mistake. It is the 15th of July that I have come to think as my fail-safe date. But anyway, it's the 25th and I'm tempting fate (& frost).

Tempting fate, me to we are gardening on the edge lol. I don't think mine are going to come up though the only seed we had was super old maybe 8 yrs, we will see.

Bean seed has held up well for me, @Collector . Still, 8 years ... I don't know if I have gone that long . Five year old tomato seed has wrecked some of my springtime fun. Sure, I think every seed ultimately came up but they were so far behind that I think I just gave up on the seedlings.

It might have been the age of the seed for my Verde da Taglio chard. I get a little exotic with choices and end up with bare spots. I put some fertilizer on this week for the 2 types of chard that I've got going but that only helps a little with filling in available ground.

Rather than have Mary run all over for that Italian chard, I just might have a good excuse and order from this company: Restoration Seed. They say it's "naturalized" in the Bay Area! Maybe @ninnymary didn't need to do that running! And, then there is the Lucullus chard. Pretty ... and "best eating chard you can grow" ..? Maybe, I will become a chard aficionado, after all!

Pole beans, with lots of Cascade Giant this time, and sweet corn, are for an early dinner!

There are finally some decent looking Nozawana turnip greens to try. Having any plants live seems a near miracle! I just could not keep the flea beetles off them in the spring. Kitazawa claims that they are both cold and heat resistant LINK. They must be. This is the first time I can remember growing any kind of turnip in 40 years. I didn't really expect to use them as greens in August.