Garden Huckleberries- when to pick, how to use, etc?

Been peeling & dehydrating garlic, cleaning the last wet seeds (gherkins, cucumbers, eggplant) and using up the last tomatillos & peppers. The plants were all cut off & placed indoors about a week ago, and the berries have mostly turned dull... I expect to get to them within the next day or two.

Zeedman said:
Been peeling & dehydrating garlic, cleaning the last wet seeds (gherkins, cucumbers, eggplant) and using up the last tomatillos & peppers. The plants were all cut off & placed indoors about a week ago, and the berries have mostly turned dull... I expect to get to them within the next day or two.
Click to expand...

So, what did you think of them?

seedcorn said:
So, what did you think of them?
Click to expand...

When I saw how seedy the berries were, I scrapped the idea of a pie. I came across several different means of jelly preparation (I compromised between them), cooked the berries down, and drained the juice. Man those berries are hard!!! Even my immersion blender had a hard time breaking them down. I froze the juice with the intention of making jelly, but have yet to get around to it. Given the temperature outside, I should probably get on that pretty soon... where is that 'kicking my own behind' emoji???

Did you boil them in baking powder first? When they are hard, they (from what I read) can be poisonous. Actually I never noticed the seeds in the pie.

Before cooking the berries, I processed some for seed saving. For wet seeds, I normally ferment them, which helps to reduce the chance of disease & makes an easier job of separating the seeds from the pulp. That was when I first noticed that the berries did not break down easily (I couldn't crush them even after several days of fermentation) and that a very high percentage of each berry was seeds. I saved seeds for both ground cherries & litchi tomatoes last year, and neither came close to that seed volume, in spite of the GH small seed size. It seems to have retained a weedy heritage, which I hope not to find in my 2022 garden.

As per directions, I cooked the berries twice. The first time, I used baking soda. After rinsing the berries, I cooked them a second time with lemon juice to get the juice... at which point they changed color to a deep purple. Some of the berries softened & opened, while others remained whole (or nearly so) until I used the immersion blender. Because I didn't harvest them until late & then by cutting off the entire plants, maybe some of the berries were already dry?

That purple color is really dark, even diluted... hopefully the jelly made from that juice will taste at least halfway as good as it looks. I may test that juice as a dye, if I grow these again. Maybe I will yet try making the pie, if you vouch for the results.

I liked the pie or crisp either and the seeds didn’t cause me any problems.

I haven’t decided IF I’ll grow them again as picking and buying blueberries is much easier. Separating the berry from the tiny green part was a pain.....

Tell me about litchi tomatoes.

seedcorn said:
Tell me about litchi tomatoes.
Click to expand...

Another uncommon edible nightshade. Tall, gangly, indeterminate plants, with attractive deeply-lobed foliage, large conspicuous flowers, clusters of sweet red 1" berries - and numerous very sharp thorns on all green surfaces. The plant size & form is very similar to tomatillo, and should be supported to make it easier to avoid the thorns while harvesting. The plants will survive a frost down to 27-28 F. It bears rather late though, and the productivity is not very high given the amount of space taken up by those large plants. I don't grow many plants, so seldom have enough berries for anything other than snacking.

There is some variability in the genome, and the cultivar I grow (Morelle de Balbis) could probably benefit from breeding efforts, were anyone so inclined (which doesn't appear likely). Some of the plants have small berries (1" or less) that drop or release easily when ripe; some have larger berries (about 1.5") that cling tightly when ripe & often tear when pulled off. I'm not putting much effort into breeding, but do select for & save the largest berries.

The berries are completely enclosed within a thorny calyx, which peels back when ripe, exposing the fruit. They have rather large seeds, and a sweet cherry-like flavor that to me is reminiscent of gooseberry (as are the thorns). The flavor can vary with temperature. A few years ago, I had one plant whose berries had a peach-like flavor; and hoping to stabilize that one, I collected some of the berries for seed saving. Unfortunately, after mashing the berries to ferment them, I forgot about them, and all of the seed rotted. I sure wish I had that opportunity to take back.

I once had photos of the mature plants, and the ripe berries... but apparently those were lost in a hard drive crash years ago. Had I realized, I would have taken new photos this year - ooops. I do have a photo of the plants in bloom though: 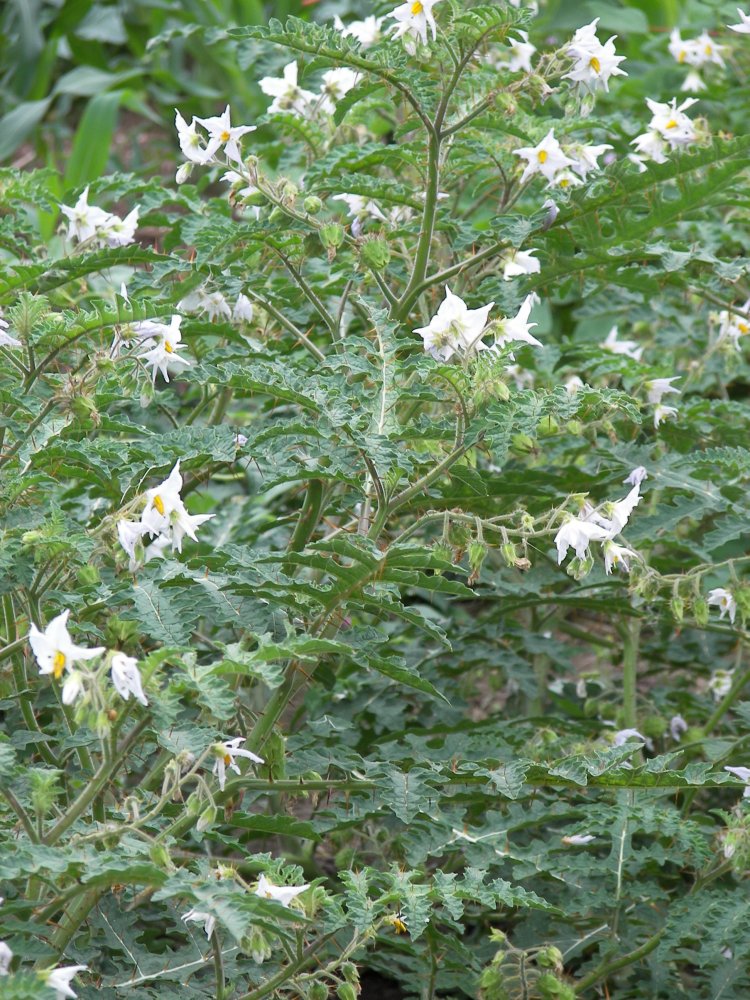 This actually is a good bee plant. You can see some of the long & very sharp thorns; you wouldn't want to plant this where young children have access. It might be good for discouraging 2-legged thieves though.

Thanks for the account. I lost interest as son as you mentioned thorns..... I have enough nasties to fight.

I learned something from this thread.......skip the litchi tomatoes and skip the garden huckleberries. I have a few wild huckleberry bushes here on the farm. Think I'll dig up a few and take them with me.

baymule said:
I learned something from this thread.......skip the litchi tomatoes and skip the garden huckleberries. I have a few wild huckleberry bushes here on the farm. Think I'll dig up a few and take them with me.
Click to expand...