MontyJ is on the war path with the squirrels around here. They ate EVERY peach off his tree. Lets just say MontyJ is not a happy camper this season.

Know how he feels. Got a few cats and it drastically reduced the squirrel population here....also the new dog won't tolerate them around the peach trees because HE likes to eat the peaches, so we finally got a real crop off the peaches last year for the first time in 22 yrs.

This year will be the first time I actually get to SEE what type of apples we have growing on some of these trees, as the squirrels have always stripped them before they could mature enough to tell or taste.

I would torture ANYBODY who steals MY peaches!!! Didn't know that cats kill them, but GLAD to hear it, since I ran a "cat sanctuary repopulating my town with cats," albiet inadvertently.

When I lived in suburbia I once permanently removed over 50 squirrels from my backyard in a month. I'd catch 2 to 4 a day in my two traps with BOSS as bait. They were so thick in that neighborhood that new ones would move in as fast as I removed them. I even hooked a neighbor on trapping them but he only took them to a local golf course to release them, those squirrels probably beat him home. I'm confident Monty will know how to permanently remove the squirrels assuming he resorts to live trapping them, but they need to be released several miles away to keep them from just going home. If Monty wants suggestions on how to live trap them let me know. It's not that hard.

Squirrels are like a lot of other things. They aren't too bad until you get too many of them. My problem here is rabbits, not squirrels. I'm constantly thinning rabbits out. In suburbia the squirrels were so thick I couldn't plant anything or pull weeds and disturb the ground or they'd dig it up, maybe looking for buried nuts. The final straw was when they chewed the flashing from a roof vent so I got a lot of water in the house in one of those south Louisiana thunderstorms. When that happened they got thinned out. 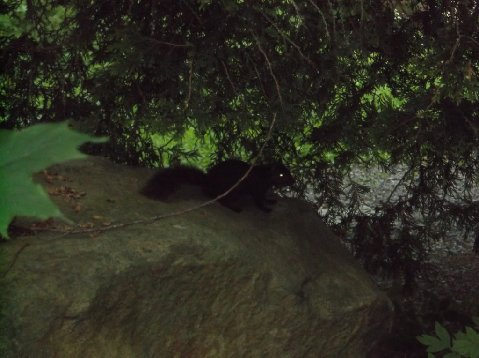 I purchased a chain link dog run on CL and planted my fruit trees inside. It helps with the deer not squirrels

I have yet to taste my apples since rats eat all of them. They've also eaten some of my big beautiful Black Krims that were already ripe. I don't know how I missed them since I've been picking tomatoes when they are only half ripe to beat the rats.

I'm sure Monty will find a way to thin them out. He let them alone for a number of years because we did not have many sqirrels around here. Now we are over run with the little buggers. rabbits are making a comeback also. Need to thin them out as well since he has spoken about a small garden next year.