Artifacts, found in Your Garden

About the most obvious artifact showing that the big veggie garden was once a part of a farm field is the "dead furrow" precisely in the center. The moving of soil from the center is matched by berms along the sides. These are the results of using moldboard plows.

I came across more likely evidence of plow use, yesterday: 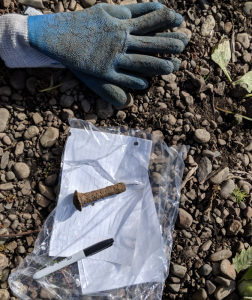 There was a broken piece of plow that I have carried off so that the tractor guy doesn't hit it again with his own rototiller attachment.

Artifacts that I have found in another garden relate to an old house that must have occupied some of the space. Finding square nails is a constant there. What I hadn't thought of finding was a square punch, obviously for the purpose of making it easier to drive some of the nails. Over time, I found two.

On TEG, I posted a picture of a net weight:

This was probably lost by a Native American when that area was underwater during high water from the nearby river.

Ceramic shards, an electric insulator, pieces of an electric switch ... What do you find in your garden soil?

chunks of metal from farm equipment, yes i've found some of those. and old pieces of glass. some shards of pottery/drain tiles.

if i've found any nails or screws they have likely been introduced by us because at one time there was a place out back where they burned a lot of wood scraps they had. i think i have finally dug through it often and deep enough to get all the rusty nails out of there though.

i am in the middle of a project which involves many thousand old rusty nails/screws so i'm trying to pull out those i can and for those i can't i'll be using those pieces of wood as fill down deep and in a place where if anyone disturbs it there will be other obvious things to contend with (like the drain tubes and pea gravel), but i don't want to use too much old wood in there because eventually it will rot and settle and i don't want it to settle more than it will already. as many pieces of drain tube i can get down in there the better as that at least will act as a space for water to be captured and then drain off.

we have a lot of glass and metal pieces in their own gardens here. broken and aged or rusted. decorative. including rusty nails and screws, boot dryers, chains, well the list would go on for hundreds of items if i went out and looked. some time i'm going to have to clean both of those up, but that is not on the agenda any time soon.

we have a friend that used to walk farm fields in the spring looking for arrow heads and other implements. he's got a pretty big collection now of those.

and then there is the junk that i introduced accidentally by two methods. one was adding some compost that i didn't inspect well enough before using it. there was a ton of odd things in there. it was basically compost that looked like they had ground up trash from a landfill, it had bits of glass, plastics, ceramics, metals, all finely ground up. i've been picking that stuff back out and throwing it away. and then the other method i added junk to my garden was when i was shredding cardboard and some paper to add to the worm bins. i found out that some cardboard had plastic coatings or had actual layers of plastic between the layers of cardboard. so iv'e become much more picky about using only plain cardboards and making sure all the paper is just plain or newspaper. no more coated cardboards or envelopes with plastic windows even if they say they are recyclable on them... i will cut the plastic windows out of things i shred here as we no longer get that much mail anyways so it isn't that bad of a thing to do. a good mid-winter day project or rainy day thing i do here every few months. shredding papers i need to do a lot more. several boxes of old college stuff i never will use again. not worth keeping or hauling around any more. some of those papers have five thousand miles on them i'm sure...

I don't recall ever finding any artifacts in my garden area.

You will have to decide on some things of your own to put out there .

I've never found anything interesting in a garden area. But at our old house we found pennies in the back yard all the time. Also busted ceramic dish shards. The former occupants must have just tossed spare change out the back door, and used dishes. They also filled in random holes in the yard with all manner of trash. When we had to have the septic tank pumped the ground above it was actually dozens of bags of trash we found when we dug it out. The inside of the house was even worse but we were talking artifacts here, not trash.

Because I have often gardened on land other than my own, I've found quite a few things over the years.

In Palo Alto, when tilling, I hit a large buried screw-in dog stake. That was VERY difficult to extricate from my tiller. Hit a couple buried bricks there too... and while they don't count as artifacts, dug up a nest of writhing gopher snakes.

Stopped immediately when they broke the surface, but most were already too severely injured to survive. Their absence probably contributed to the plague of gophers I had in the garden that year.

In San Diego, I received permission to garden in a vacant field on a military base. The tiller always jumped at one point in the garden, and I got tired of it & decided to dig up what I thought was a large rock. No such luck - it was a buried asphalt sidewalk, 6" down, which ended 1/3 of the way into the garden. Apparently there had been a building there at one time, long since gone... some testing with the pick revealed that the sidewalk extended to the road. Fortunately it was very narrow (a little over 2' wide) but it took me a day to dig up the portion under the garden.

My present rural garden is on a friend's property. Some time in the past (predating the present owners) either there was a barn fire there, or a fire pit, since I've found fairly large blobs of molten aluminum. That, and so many nails, bolts, and misc. metal parts that I keep a box there during the summer to collect any metal that I find. I seem to have found all of the larger metal parts; but even after all these years (since 2005) I still find a handful of nuts, bolts, and nails every year (some of those are square nails). No worries about iron deficiency in that garden.

I'm guessing that unearthing parts of my own tiller and/or tractor doesn't count?

Found buried coins several times, but always too severely worn to even determine the date. One was a buffalo nickel (still have that one) and one was a silver dime. Wish I could have found a silver dollar, but I only find those in laundromats. 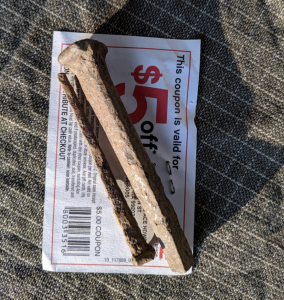 I'm not sure that one of these is a punch. I have found two of this size and, remarkably, one was perfectly useable. It was obviously made of much better metal than these two. I felt guilty making off with that tool and brought it to the property owner. He really has carpenter skills and can make use of it if he wants.

The nails, I really became disinclined to even pick them up and look at them. There were dozens that showed up through the years.

I'm not sure that one of these is a punch. I have found two of this size and, remarkably, one was perfectly useable. It was obviously made of much better metal than these two. I felt guilty making off with that tool and brought it to the property owner. He really has carpenter skills and can make use of it if he wants.

The nails, I really became disinclined to even pick them up and look at them. There were dozens that showed up through the years.

i'm not sure what that is either.

Never have found anything in my garden. Not even tools that I've lost!

ninnymary said:
Never have found anything in my garden. Not even tools that I've lost!