Most horticulturalists will recommend Insecticidal soap. It is NOT mixing Dawn with water, which will kills your plants, too. 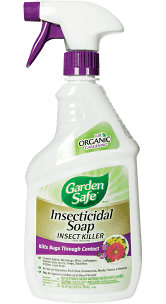 Something else I have learned over the years is to only weed your beds when the weed is getting too tough to pull out and/or it is starting to go to seed. You can always water heavily and it will come out OR get a hand rake underneath it. The weeds compete, but most don't kill your vegetables.
Weeds often take the hit and the bugs will eat on Them instead of your vegetables. I see this every year.
V

ducks4you said:
Most horticulturalists will recommend Insecticidal soap. It is NOT mixing Dawn with water, which will kills your plants, too.

Thank you for the information, however, this cannot be shipped to CA apparently according to Amazon. Bah Humbug.

Look at your local hardware stores/garden product areas. They should still have an equivalent product for sale,since we are still in season.
Just thought everybody and his brother, cousin, dog and cat ordered through Amazon.
My bad!

Some beetles have a very hard exoskeleton and insecticides that dehydrate the insect may not be effective on them.

I use Spinosad for things like flea beetles, Colorado potato beetles, squash bugs, etc. It is an organic toxin and must be eaten.

If the beetle somehow avoids eating the insecticide, perhaps by being under leaves, pyrethrin has worked especially for squash bugs which are very mobile and will hide. Pyrethrin is also organic and acts on the insect's nerves. The insect can absorb the insecticide through respiration.

Both of these degrade quickly, especially the pyrethrin. However, if one follows the other for hard to get beetles, they amount to a "double whammy" and have been effective when necessary.

Not sure if it matters which kind of beetle they are, but the ones I've been getting will drop to the ground if you try to pick them from the leaves.

A wide-mouth container with soapy water held underneath the plant works wonders, as they drop right into it. Really fast and nearly effortless. Mine are, I believe, cucumber beetles.

i pick them off by hand, or i go out and find the eggs the adults have laid and squish those, or i accept some damage and do other things with my time instead. it depends upon the beetle and how many plants i have.

right now it is full on Japanese Beetle season so i'm picking some of them off the beans as they appear. i don't get all of them, i never can, but i can make enough difference that i will still get a crop from some plants so it is worth the few moments it takes me to do it. plus i get free dead bugs on the ground for free fertilizer. turning the negative into a positive. maybe.

It depends upon what beetle(s) are the problem. For Colorado potato beetles (both larvae and adults cause damage) there is a strain of Bacillus thuringiensis (or Bt) that will kill the larvae. The insecticidal fungus Beauveria bassiana can also be effective... but perhaps too expensive for small-scale gardening. Maybe on a local forum, several gardeners could pitch in & share? Since CPB will attack other Solanaceae, and you are growing many of those @Varmit , I'm guessing they are one of the problems.

For some beetles, scented traps can help. Japanese beetles are a problem here; scented traps (such as Bonide) are very effective at reducing the population. Properly placed, the traps also lure the beetles away from the garden. I have 2 traps out now, they each catch 100+ beetles per day, which I empty into a bucket of soapy water daily.

For most unwanted insects (including beetles) I used a mix of insecticidal soap, 50/50 alcohol & water (ethyl alcohol is best), along with about a tablespoon of maple syrup and/or cooking oil per quart. The spray kills all soft-bodied insects, and will kill many beetles provided that they are completely wetted. I've mixed pyrethrin into the spray in the past, and that worked well. I just spot spray with a spray bottle, and get little to no leaf damage... but if covering a large area, wash off the spray about an hour later.
You must log in or register to reply here.
Share:
Facebook Twitter Reddit Pinterest Tumblr WhatsApp Email Share Link