I have decided to use cardboard to cover the garden. I am going to put plastic around all four sides of the garden to kill weeds, and bury it I think and just keep around the edge. I went and looked at different areas around my yard where I have started compost bins or where I dumped piles of rabbit bedding and another area where I started a bed for lettuce a couple of years ago. I put a lot, of compost there, and then the next year I planted asparagus there and get a little, but I noticed the dirt is just as black as can be and in the weeds there are the biggest strawberry plants I ever saw. The leaves from the apple tree fall there and just go into the dirt, so I want to use all the rabbit bedding and old half finished compost. The problem is most of the rabbit poop, is mixed in with straw. That straw is where I have caused most of my problems. I take straw and mulch and it sprouts. My question is should I spread the straw stuff on the ground first and then the cardboard or put it on top of the cardboard? I thought maybe if it sprouted and was on top, then next spring I could till it in or cover with tarps and kill the weeds until time to plant. I am not sure, but DS is bring some cardboard home from work. I have a lot of what I think is wild geranium weed and most of it is around the edge, but now growing everywhere.

Maybe hot compost the rabbit manure straw mix to kill the seeds? The other option is putting a black tarp over the area where you spread the compost and leaving it there for couple of weeks. The idea is that the heat and moisture under the tarp will germinate all the seeds but the seedlings will die without sunlight.

Cardboard is great stuff for suppressing weeds! Just be sure to strip off all the plastic packing tape and labels before you use it or you will be picking up fragments of those forever . . .

Cosmo spring garden said:
Maybe hot compost the rabbit manure straw mix to kill the seeds? The other option is putting a black tarp over the area where you spread the compost and leaving it there for couple of weeks. The idea is that the heat and moisture under the tarp will germinate all the seeds but the seedlings will die without sunlight.
Click to expand...

I cannot get the compost hot enough and just too much work for me now. The tarp may be the answer. Put the cardboard, and all my stuff and then leaves in the fall and let rain and snow fall and then in the spring when anything starts to sprout, cover with black tarp for a few weeks and then take it off when ready to plant.

PhilaGardener said:
Cardboard is great stuff for suppressing weeds! Just be sure to strip off all the plastic packing tape and labels before you use it or you will be picking up fragments of those forever . . .
Click to expand...

I have used cardboard to build boxes, but never on just the regular garden. Do you think it will be gone in time for tilling in spring?

I decided I am going to get the big weeds out, put the cardboard starting in a corner I did not plant this year. Do a row or 2 length of the cardboard, then dig compost out of the bin and cover the cardboard and keep going until the whole garden is covered. I watched Charles Dowdling videos and others. I need to bring my garden edges in and have a definite boundary. After all the compost is out of the bins, then I am going to move the straw with the rabbit droppings and use a fork, and get mostly straw and put it in the empty bins and then rake up the rabbit droppings for the garden. I will get some straw, but not as bad. Then I am going to put cow manure over the garden. The ideal thing would be to have it here early and then put leaves down and cover with, the manure, but I am afraid it will snow or freeze and I do not get the manure spread. I have a couple of small fences to take down to get the truck to the edge of the garden, so I am going to get the manure within the next week or so. All of the areas that are outside the garden, I am covering with tarps until spring. Then, I am not sure what to do for the ground outside of the garden area. I have a lot of flowers but the area is taken over with weeds, but a lot of flowers in there that reseed. They need a boundary barrier type edge to keep the yard separated.

if you want to smother weeds and seeds put the cardboard over whatever else you may put down. cardboard then weed barrier then wood chips makes a very effective weed smothering. overlap a few layers of cardboard by enough distance to make sure no light gets through the cracks.

this method we use to go over lawn areas and nothing comes back through that.

for areas where i may want to cultivate again in a few years time after the weeds are suppressed i will use cardboard layers and any mulch to cover that i can scrape back to replace the cardboard as it does get wet enough here that the cardboard will mostly be decayed/worm eaten by the end of the first year. so it needs to be replaced, or retopped up again to keep the weeds smothered the second year. normally after that point if the area is not disturbed it will not sprout many weeds after that, but there are always some weeds that will blow in on the wind or come with the rains or animals move the seeds around.

for a garden bed you expect to use next spring mulch it with whatever amendments you want to use and then put the cardboard over that until next spring, weigh it down so it won't get moved by the winds. you'll need more than one layer (to overlap the seams). i would not put anything else on top since you plan on removing the cardboard next spring. if you want to put tarps over that you can do that too and put your weight on the tarps. that should smother quite a bit until spring.

whatever is left of the cardboard in the spring you can bury or use under pathways/areas you plan on walking between the rows of plants. there will likely be some mouse nests and perhaps snakes/etc under there, that's ok. they'll move on when you change things around.

cardboard is not a permanent pathway or barrier material, that is why it works well IMO. it does the job and then goes away as the worms and wood lice, etc eat it.

for a formal garden bed you do want a good edge down in the ground to keep intruding roots from grasses and other weeds to have an easy pathway into the garden bed. at least three feet of pathway inside the edge and the second edge to keep any weeds in the formal garden bed from getting out under the pathway. we have crushed rinsed limestone used as pathway mulch around a lot of areas here. it works ok, but once it gets any dirt in it or any garden debris then it will eventually start sprouting weeds too and it will need to be taken up and cleaned to get it back to mulch only. after 20-something years here i have places that rarely sprout any weeds at all because they get no real action at all and other areas have become nearly constant problems of one sort or another and need some work. with as much area as we have i've removed some pathways that were useless (and that has saved me some time already this past garden season ) and it also gave me more space to plant garden vegetables (more beans ! )...

i much prefer wood chips as pathway materials once i have a good weed barrier down and my edges in place. that way when the wood chips break down they can be removed or topped off with new wood chips and the humus can be used in the gardens. more than that though i much prefer no pathways at all and having larger spaces to manage as i can rearrange how i plant a garden without having to work around the pathways and also every edge in a garden is work to keep up. the fewer edges the easier things are. just one good border around the larger garden and as part of that border make it a good fence with the wire mesh under the pathway to keep the animals from digging under the fence. saves a lot of later troubles to have a good fence in place.

We went to TSC one time and got a bale of compressed cardboard. It helps to have a friend on the inside. LOL It took forever to pull off all that tape! We busted the bale in the stock trailer as we didn't want it blown all over the place.

I put cardboard down in the spring, cover with wood chips and plant through it.

I like all you said flowerbug except the part about mice. I quit putting food scraps in my compost bin a few years ago because I noticed my cat sitting on the bin and realized there were mice. Never have had it happen since. I think I will put it on the bottom and if still there in spring, do what baymule does and plant through it. I don't think I will be tilling. I think this will keep the weeds down enough I can keep them under control, or at least I think this will happen.

This pile is what I cut just to get to the ground to start clearing for the cardboard. I will add more tomorrow. DS will take it to the dump Saturday. The picture where you see the blackberry canes, I cut all the blackberries back chest high this spring. Those canes are new for next year and underneath you can see all the ground where the grass and weeds have grown. There used to be a walkway through here. The next picture is where I I did not plant this year and the weeds came up. I am going to take all the fence down and redesign the whole thing. The east side we have 5 panels left to finish the 6 ft, fence. The alley side we are going to put up wire so I can see out and talk to neighbors when they come by. More and more I am thinking of wood chips for the edges and walkways. The last picture is why I have to have a fence and where my extra 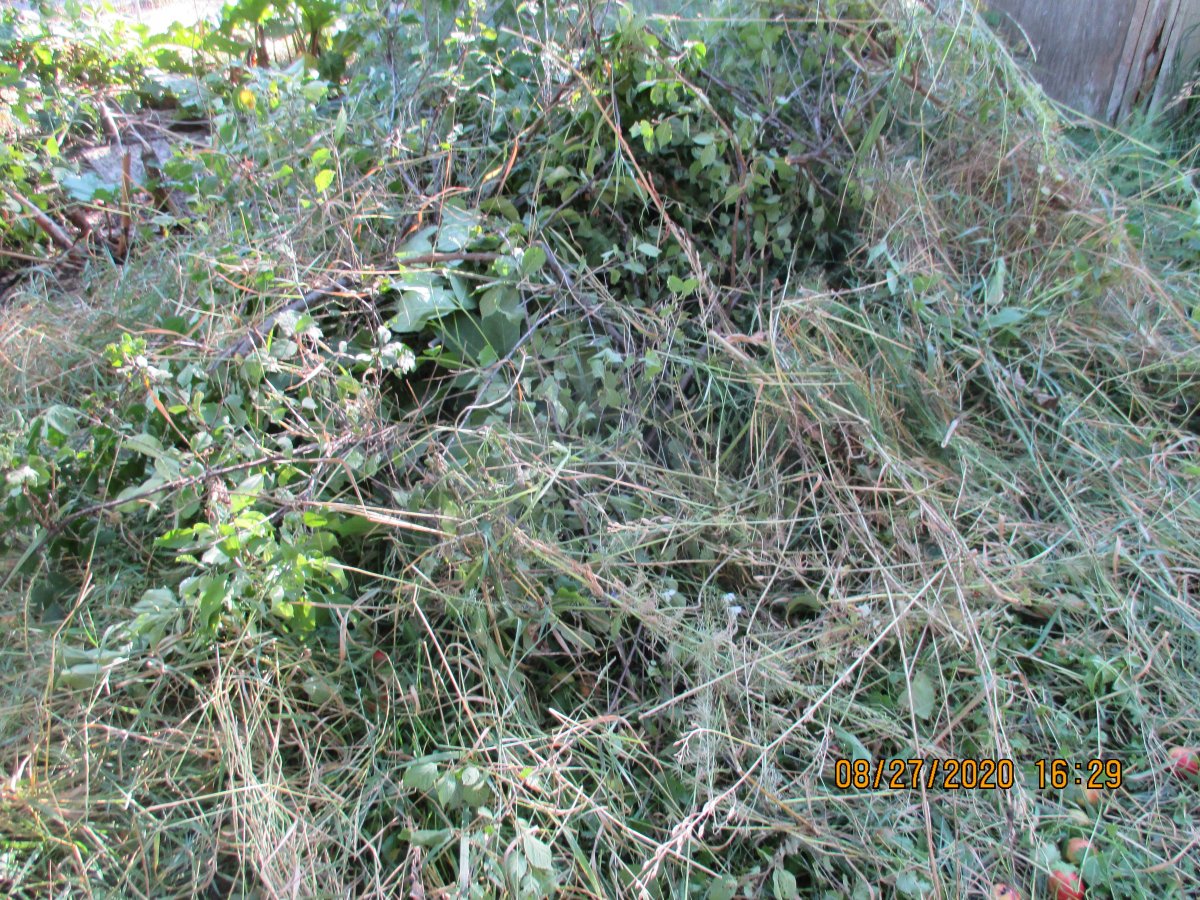 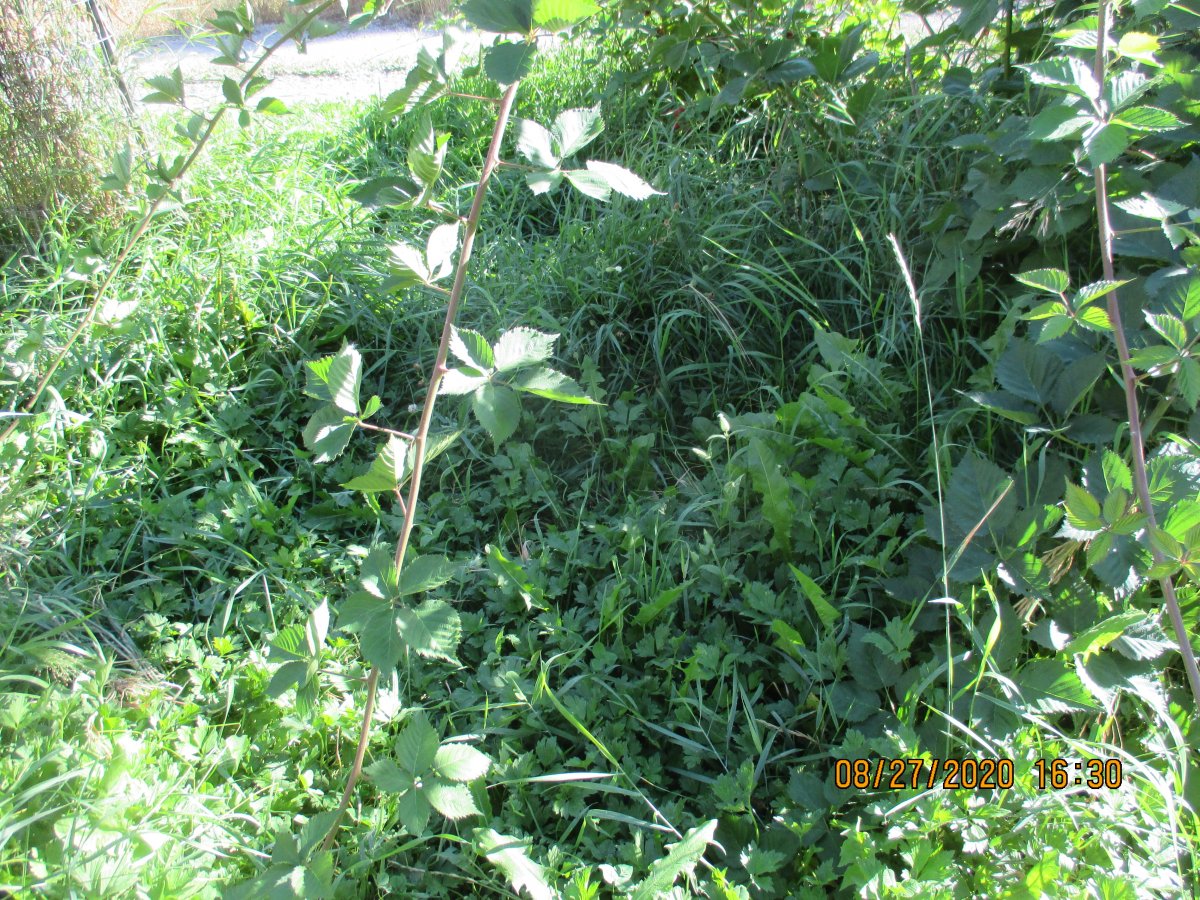 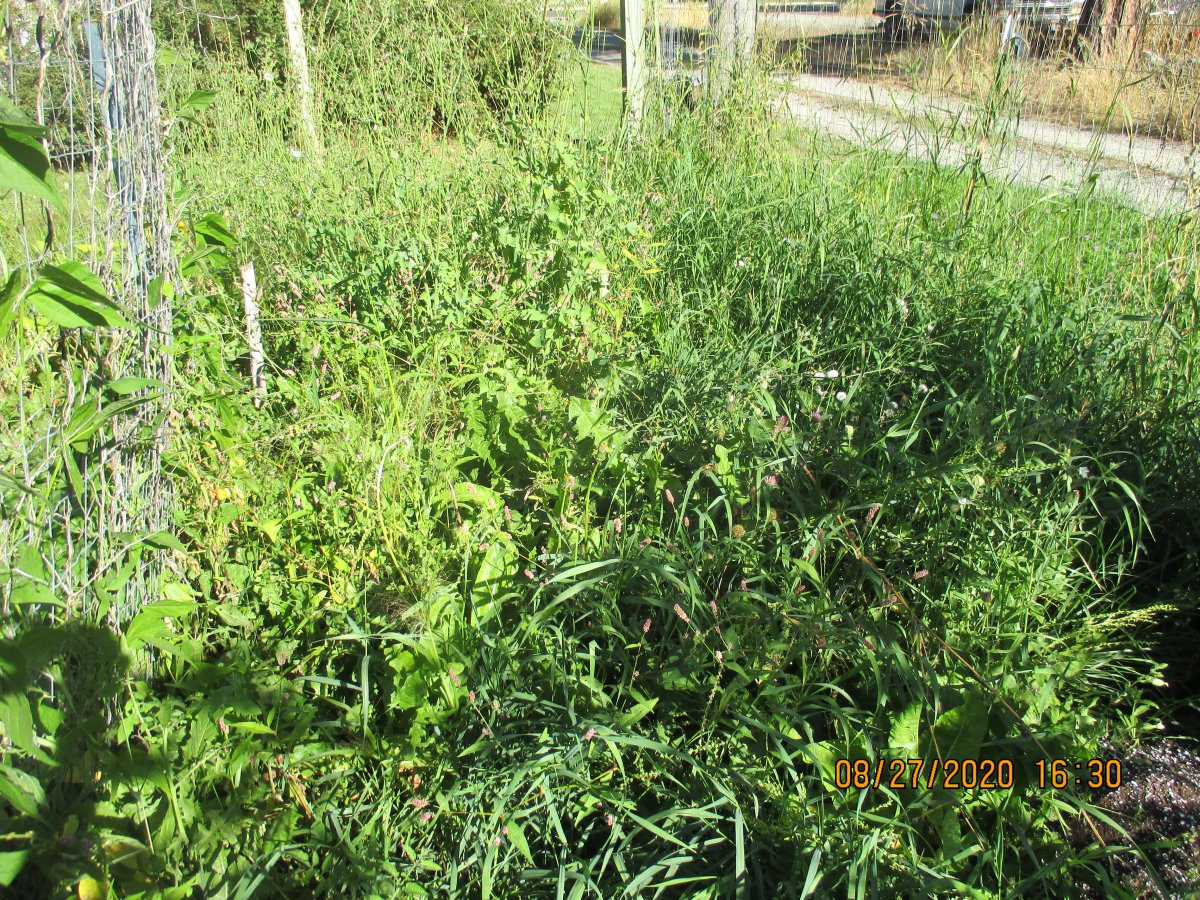 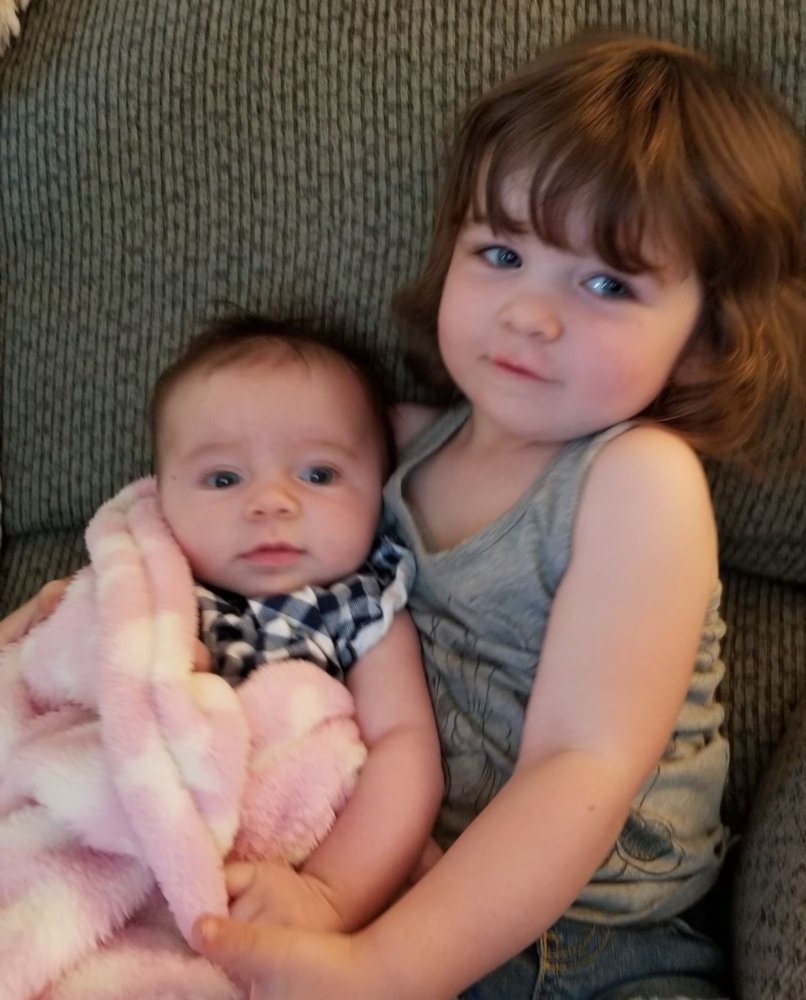