Prairie Rose said:
I just love this dog to pieces, but he's so different from every other dog I've ever had, it's like being a new dog owner all over again.
Click to expand...

You said a mouthful. You are 1,000% RIGHT! These dogs are almost a different species. Our new puppy, Sentry, is so wise, so understanding, and so smart. I was telling my husband tonight that I've had smart dogs, I trained dogs to voice commands, hand signals, do all kinds of tricks, and they were so smart. Sentry is the smartest dog I've ever had, but in a totally different way. He doesn't do tricks and never will, that is not who he is. He is my farm partner. he is my equal, maybe even smarter than me.

Trip clawed at the back door a few minutes ago, it is raining. I now have a big hairy, white, wet, and smelly dog under the recliner footrest, sound asleep. Gosh, I love that big boy!

I'm glad that you got him a good warm place to get out of the weather. he'll be fine now and happy to be outside. What is his name?
P 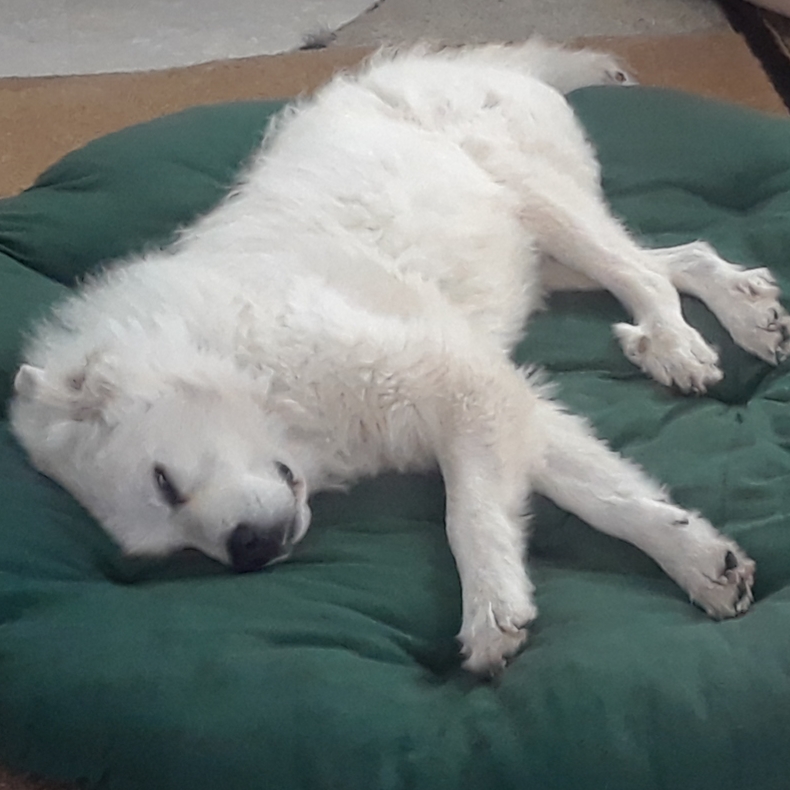 His name is Boone, and this is how he spends most of his days

His name is Boone, and this is how he spends most of his days
Click to expand...

to me that looks wolfish, and that's not a bad comment from me. i don't know anything of that breed.

I love Boone! Laid up sleeping during the day and up and on patrol at night. These dogs are in a class of their own.

@flowerbug Great Pyrenees have been bred for a thousand years in the Pyrenean mountains in France. They lived with the flocks and the shepherd. They are gentle, fiercely protective and they don't need to be told what to do. Their independent nature can make them frustrating, this is a breed that is not for everybody. They are working dogs and need a job to do.

My Great Pyrenees Trip is working now, I hear his booming voice telling whatever is out there to stay away.
P

I always walk him when I get home from work, and when I close that can be pretty late in the evening. Last night we surprised a very small possum that was cleaning up beneath the bird feeders at the edge of Boone's area. We stepped back and let it go, but he had to go outside right after we were done to sit at the bottom of the tree and look for that possum. For almost two hours, lol.

A few days ago I got up in the middle of the night to check on the barking and found a young buck standing ten feet out of his reach, just teasing him. Boone was very happy when I opened the door and made the deer move on, once it got out of sight he curled up and went back to bed!

For all of his booming voice and rattling growls, it is the funniest thing ever to watch him stop and think when one of the housecats gives him the evil eye and an arched back. I had to physically remove one of the cats out of the hallway tonight so we could go for our walk....he wouldn't even go around, lol. I don't have any livestock for him to guard, so my posse of cats is the closest thing to a flock he has!
P

After a lot of coaxing, Boone uses his doghouse now regularly. He doesn't like to pick his feet up over the rim of the door...it took several pieces of bacon and the end piece off a leftover roast beef to even get him to go in the first time, lol.

We had a nasty storm blow in last night just after midnight, and when I got up to let him in he just peeked at me from his doghouse, safe and sound. Now that he is using it regularly, I am going to add a door to it, and once it gets cold a heated bed. They make one that covers only section of the floor, so he doesn't have to lay on it if he doesn't want to.

We also passed a critical test yesterday. He got away from me when I was walking him, I dropped the leash trying to wiggle feeling back into my numb fingers. He ran for about a minute (towards the woods and away from the street), but when I called him he turned around and came right back to me. That makes me feel better knowing that if he does get loose or go over a fence he's not going to ignore me and just run, like our old akita did.

We have been taking long walks a couple times a week through the cornfield back towards the woods, so he can get a closer look at his new territory.
Last edited: Nov 28, 2019

He came back when you called him! That is very, very good. Is the cornfield your property? Reason I ask, is you don't want to walk him off property, he gets the idea that "off property" is his too. Using his doghouse, that is progress! Bribery with bacon and roast beef will go a long ways to the heart of a dog. LOL LOL

baymule said:
He came back when you called him! That is very, very good. Is the cornfield your property? Reason I ask, is you don't want to walk him off property, he gets the idea that "off property" is his too. Using his doghouse, that is progress! Bribery with bacon and roast beef will go a long ways to the heart of a dog. LOL LOL
Click to expand...

Yes, the cornfield is a part of our property, it intersects our yard and the timber stand we are responsible for. The actual grass part of the yard is small, no sidewalks in my neighborhood and too much traffic to safely walk on the road, so unless we go to the park in the next town over, we don't have a big area to walk. I am hoping by taking him along walks around the back edge between the woods and the field, when he does get loose he will head in that direction instead of towards the street.

You've discovered my master plan....that's how I lure them in, lol

Sister currently has one Pyr. She has had up to THREE at a time! All have been rescues. Starting with Burl. He showed up as a scraggly puppy in her yard. Her old girl is living in the house at night and outside all day. She did dig out and climb over many times. Yes she BARKS at EVERYTHING. Thanks Lily for guarding us against tractors, bikes, deer, planes, etc... She is such a love. Good Luck.
You must log in or register to reply here.
Share:
Facebook Twitter Reddit Pinterest Tumblr WhatsApp Email Share Link