All that is listed in my title are what I am attempting to grow.

My blueberries are not thriving this is because I'm so ashamed to admit, I have forgotten what to feed them.

@flowerbug gave me advice that stuck in my tired old head

about growing plants and worming feed but I need other solutions.

My broccoli is in temporary Housing right now because they are going into the raised bed along with my pumpkin.

My chives will be planted alone until I can find a good companion plant I read they don't grow well with mint, or my herbs which will have their own section. 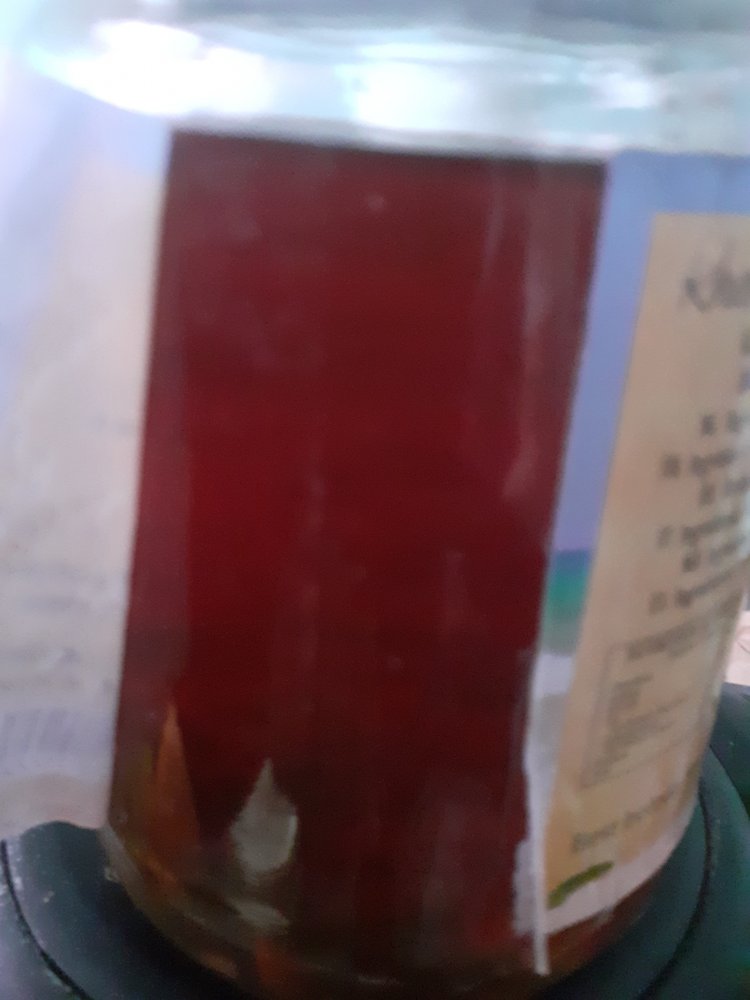 @digitS' suggested I hope the garlic is ok?

Hoping my good friends here can guide me along. I would be so grateful.

The worst gardener on TEG

P.s. Gardening is not easy

I generally feed my high bush blueberries lightly twice per year, once after berries and once late-late winter or very early spring. They grow slowly, so I give enough time for them to think about eating and have full bellies before they start to work flowering. We have an acidic clay soil, 5pH naturally, so it is easy to use acidifying fertilizers to get the soil to a 4pH range.

I do not grow much brassica, but here a magic nutrient is boron. Clay is by definition weathered and with an average rainfall exceeding an inch per week the liming effects of water soluble nutrients like calcium and magnesium are leached out so we lime up like crazy and use humic carbon sprays or compost and prepared micronutrients sprayed in the fertilizing program.

I favor chives in a pot for year round growing. I am a potatohead so chives are important to me, and I hate weeding them after letting them sit in the garden soil. Plus the seeds are a little fussy to start so better to keep them going.

Before planting I composted heavily for good drainage. Blueberries have a shallow root system so they can drown if the ground doesn't drain well. They don't have deep roots to go get water so they can dry out if the rain fails. I carried a lot of water to my blueberries in summer. I save my sawdust from untreated wood and use that to mulch the blueberries. As that rots it adds compost. That's all I fed them, no fertilizers.

Blueberries want a very acidic soil. I use sulfur to bring the pH down to around 5.0. It takes a while (months, maybe a year) for the sulfur to work. Most garden plants want you to be between 6.0 and 6.5 pH so blueberries want it pretty acidic. If you can I suggest you get a soils analysis or at least a pH test to see where you stand on pH.

Marie2020 said:
broccoli is in temporary Housing right now because they are going into the raised bed along with my pumpkin.
Click to expand...

I consider broccoli and pumpkins general garden plants and don't feed them specially. I get a soils analysis every couple of years so I know what nutrients are missing. Usually with my soil it's only nitrogen. I use a lot of compost which I think helps a lot. My pH is naturally in the low 6's which helps a lot. Before you add either lime or sulfur to adjust pH I suggest you at least find out what you are wiring with. If your pH is high adding lime is not the answer.

When I was in Northwest Arkansas my chives survived in the garden. They'd die down in the winter and come back strong each spring. Your winters probably aren't as harsh as mine, the coldest I ever got was -22 C, (-8 F). They'd grow in a clump that was so thick weeding wasn't a problem as long as I kept the grass out. Bermuda grass may be a great lawn and pasture grass but it's horrible in a garden. The chives clump would keep growing so every 3 or 4 years I'd take a half dozen bulbs and start a new clump. When that was established I'd take out the old one.

My chives formed scapes, a flower. I used those on salads. Some people like the flavor, some don't, can be kind of strong. I kept the flowers cut off so it never went to seed. That clump would continue to grow as new bulbs are formed but I never considered it invasive.

Lowering pH is something a little tricky, apparently. Blueberries needing such low numbers would be difficult here. Remarkably, there is a commercial blueberry operation not far from my big veggie garden. I imagine that sulphur plays an important role for them.

Not Marie's Question: I did some checking starting with my Encyclopedia of Organic Gardening. It wasn't a lot of help but I did learn that spruce trees require an acidic soil. That makes sense and is another reason people shouldn't plant them in their yards here. @Carol Dee was noting how her spruce stands up to strong winds while I'm commenting on the high percentage of spruce that blow down in our neighborhood. Gotta be part of the problem with a shallow root system. How deep do they want to grow when we have such an alkaline soil?

Those acres of blueberries are, ironically, not far from a soil test site done by the U of Idaho and which showed the highest pH amongst several in this valley: High 7's. If I wanted to try adding peat moss, that may work fine but it would be expensive for a large area.

Organic material is generally considered acidic but trends towards neutral as it composts. That is okay but wouldn't do a lot to lower numbers in alkaline soils. One might think of manure as acidic but that probably isn't so, according to the U of Florida. Cornell University gives detailed iructions on how to test compost pH involving drying in your oven. I don't think that I will be trying that and, for sure, not with manure!

Coffee grounds for a small area is something my earthworms love . However, this opens up what U of Oregon horticulturalists refer to as a "myth." The acid in coffee is water soluble so is washed into your cup and not left in the used grounds!

Oh, on the subject of chives and mint - both are considered invasive in many soils/climates. Most of the mints are here but, altho they thrive in my garden, chives don't invade the lawn grass as some mint will. Both do well in the shade and the chives have only earliest morning sunlight.

in places where the soil conditions are unsuitable (FL where it's often alkaline) they perch the organic material they grow the blueberries in up on top of the subsoil. depending upon the location they'll use whatever organic materials they can come up with. my friend down in FL says they often use chunks of bark. and as it breaks down they do have to keep adding more.

in order to grow them here i'd need to perch the plants well above grade where our basic soil has too much clay and doesn't drain too well and probably need a cubic yard of organic material per plant. since i don't really have the space for something like that here or the soils for them growing blueberries has only been a daydream of mine.

so i can't really give much advice other than that as i don't have direct experience.

my local plants that make their own environment for their root systems are the cedar trees. they are thriving here because they drop plenty of their own mulch and then that is what they'll send more roots into up higher so they are effective at self-regulating their habitat. babies spring up all over the place.

broccoli we've only grown once here and the groundhog ate the plants back to stubs as often as it could. i think i only got one very tiny sprig of a flower stalk off the plant to eat. it also ate the cauliflower. so i'm no expert on growing that plant either. if you have heavy clay that isn't well drained i'd guess you might need to perch the garden up higher a bit so there is better drainage.

pumpkins are enough like squash that we don't do anything different for them other than make sure there is some better drainage and have worked in some organic material into the area where it will be planted the fall before. still even without adding more organic material we still manage to get some squash harvest. the plants are growing pretty well now. in a few more weeks we should start to see some flowers. the only fertilizers i use are the worms/worm castings and whatever organic materials i can work in the gardens. we have full sun (when it actually is out), i think that and making sure the ground gets regular water is more important for productivity than having perfect soil. and then for pollination we have the bees.

One of the Master Gardeners on Mid American Gardener was talking about the 30 (yes, he bought 30 of them) wild blueberry plants that came back to IL with him from, I THINK he said, South Dakota (or Wyoming.)
He said they are literally NO CARE, and produce very well.
The fruit is smaller and, he said, sweeter.
I liked the "no care."
I have the 2 blueberry plants I bought this Spring still in a tree pot.
I Intend to dig them each a hole big enough to bury a dog, them fill it with a combination of garden dirt and used stall bedding including manure.
I also intend to put in a stake and tie a used milk jug with the top and holes at the bottom so that I can drip water them.
We'll see how it goes...

Interesting that you say "full sun" but that cedar trees thrive, @flowerbug .

I don't know that this would help with Marie's blueberries or not but we don't have the native species in our forests. Maybe someone in "blueberry country" could tell us: What companion tree does the blueberry like?

A few people have cedars in their yards. The trees look to be very slow growing and that is probably from the arid conditions. Relative Arborvitae is quite common but has some problems with rust, some years. Native cedar grows on the north side of our mountains.

Would evergreen needles make good blueberry soil amendments? There is another myth that pine needles are acidic, even too acidic for gardens. A number of university Cooperative Extension websites make the point that this is not so. I find pine needles very useful in compost. Cedar? Spruce? Juniper Fir? Cypress?

Steve, I heard a master gardener say that pine needles will pull nitrogen from the soil until they are fully broken down, therefore NOT a good mulch when simply raked up.
So, I think, "no."
So, you would need to pile them up, turn them, and REALLY let them decompose first.
When it comes down to it, the best mulch is really, leaves.