FIRE , then Smoke & our Air 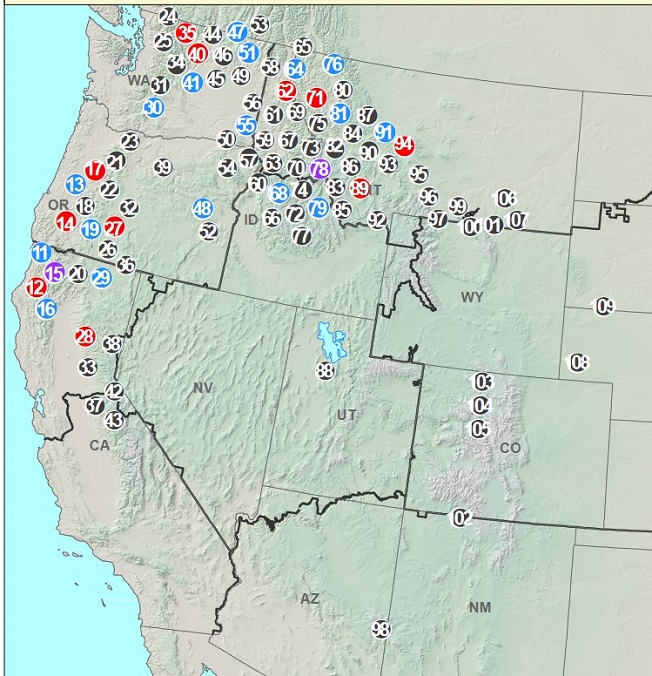 What the National Interagency Coordination Center call "Large Incidents" fires - as of 10 August. 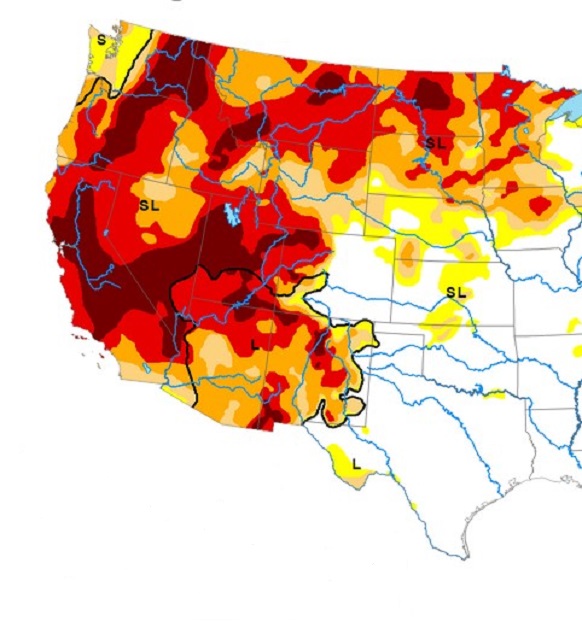 Last night the air quality was at 424. Hazardous. Eyes sting when going outside here. Its the Dixie Fire in CA and our fire Bootleg in eastern OR.

Water? Drought? I was thinking of snoozing this forum, cus we just don't have enough water to grow any of my own food. That, and the squash bugs have killed or just about killed all of my squash plant. AND...108 here for the next two days, meaning that tomatoes won't set and all the leaves curl.

The air had improved a little by the time we visited a friend early this morning. We were about halfway between home and the big veggie garden: 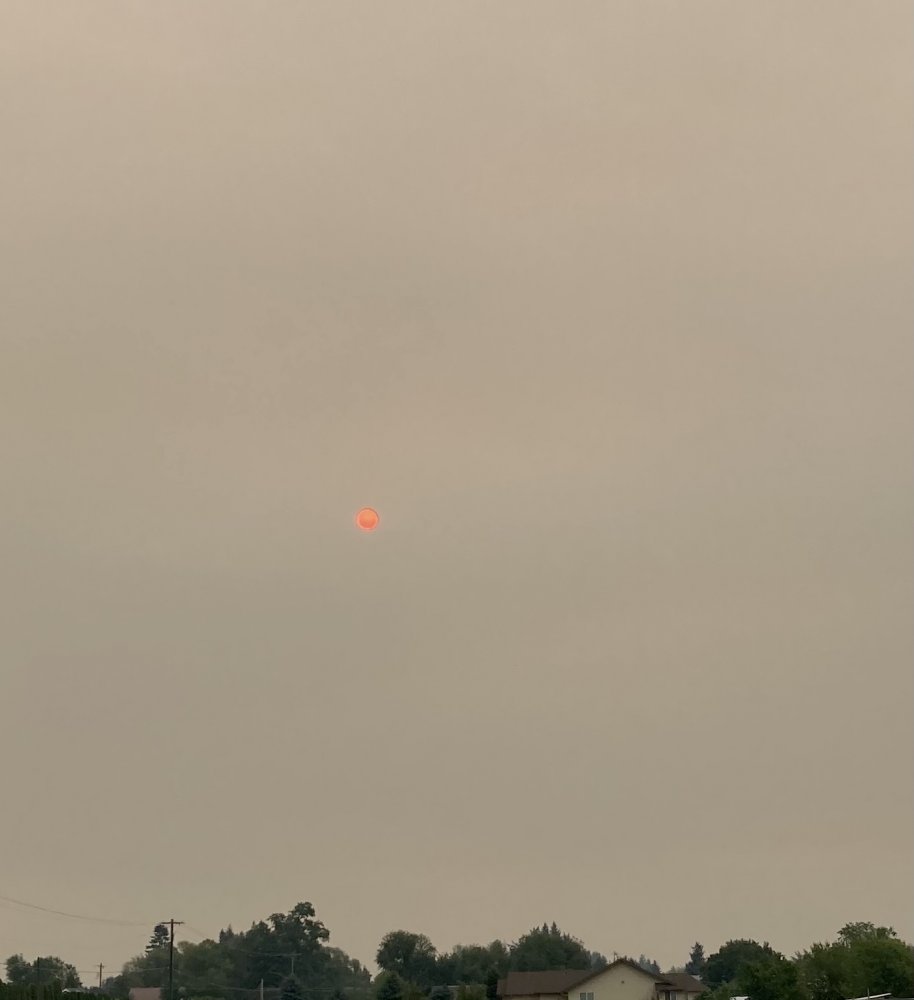 Still right in the middle of Unhealthy for Sensitive. The 2 states with the Weather Service has a special air quality alert for eastern WA and northern ID through Monday.

Made it up to Very Unhealthy for awhile.

The Weather Service posted a photo of their sunset: 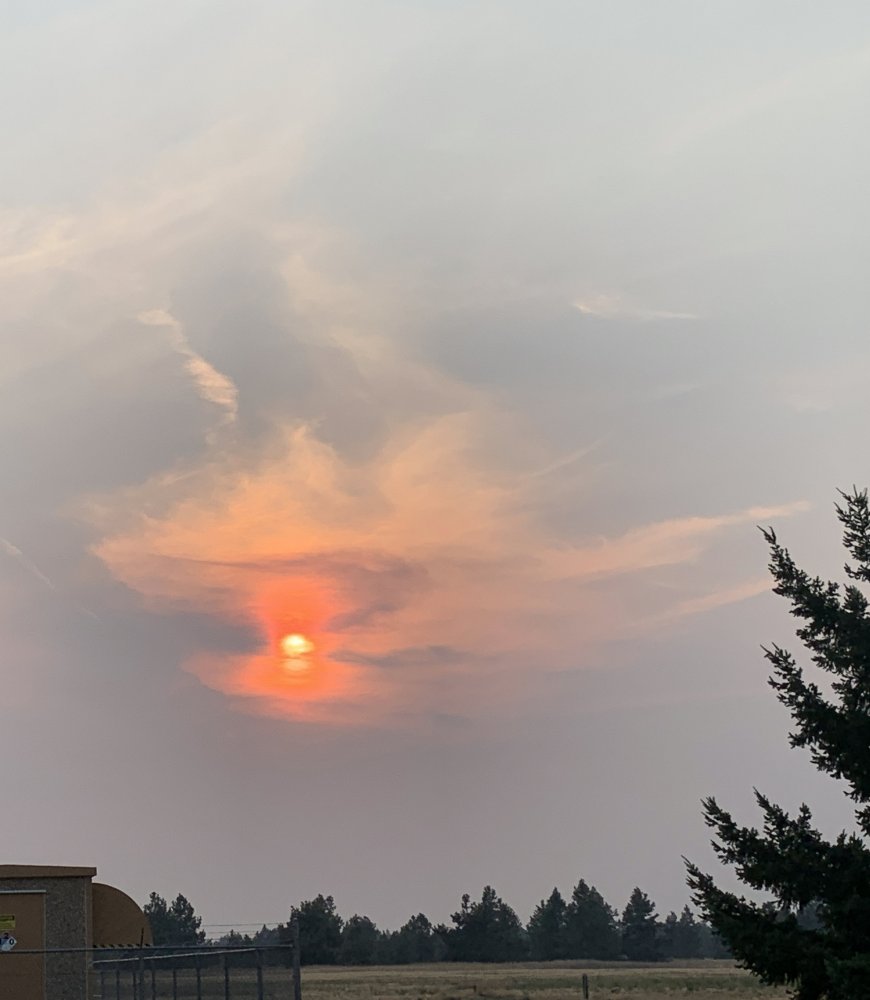 May not have much of an improvement until next week.

I wish we could send some of our rainfall out West, where its needed. It seems like it is either drought or deluge for many this year, and too little in between. 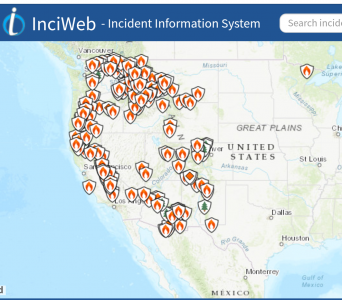 DD lives nearby and asked me where the fire is that's sending us all the smoke. Before it joined with the 2 state governments in ramping up the alerts, the Weather Service had predicted that the air would clear somewhat yesterday afternoon because of a north breeze. The breeze happened the clearing didn't, the authorities decided to blow the whistle.

With hindsight, it is easy to say, "what the heck were they thinking?!" There's a 4,000 acre fire to the north and all its done over the last week is grow from about 3000 acres to 4,000. We have Nevada firefighters here helping with that one, thankfully!

It's 58°f outside and 77° in the house, since the AC was turned off when we migrated off to bed at 9:30pm. I would so like to open the windows and blow this indoor air out! Better not, I have some standards on what I bring into the house ...

I so understand my 100 year old Dad, who retired from life in 2019. He wanted independence but, of course, it was impossible. It begins with this envelope we call a house. I can barely understand how electricity is generated and carried through power lines and transformers. Air conditioning, my Dyson filter displays numbers, I don't know what they mean. When was the last time the auto industry built a car that I thoroughly understood???

Man alive! I go back to a time when I drove a tractor on our farm that had an electric starter retrofitted so you didn't have to turn a crank ...

@Rhodie Ranch -- you know, every time I type that name, I think of "Aunt Rhoda," a dear friend of my grandmother's who lived into the 1970's, nearly 20 years after my grandmother had died. Anyway, if your water usage is only restricted by time of day, as Dad's was one year, and you have a hose ... buy one of those really cheap sprinklers. I have some that will put out 1/4" of water in 10 minutes. Small area but 7 days in a week ...

Its so smokey here this a.m. that once again, the sun is bright red.

I love my old whirly bird sprinklers. I can make them as large a circle or as small as one wants. I'm barely keeping the grass alive. It will always come back. The foundation plants get the fiver gal bucket from the shower and the 1.5 gal bucket from the kitchen sink.

baymule said:
In the drought of 2011 and 2012, Texas was on fire. It was awful. It was bad, but not near as bad as what is happening in the west. I hope rain comes for the west, soon.
Click to expand...