how to properly prune tomatoes

Determinate as it refers to tomato plants means that the plant will grow (more or less) to a genetically pre-determined height (about 4-5 feet). Once reaching that height, the upward growth stops and all the fruit ripens at or around the same time usually within a two week period. Determinates, sometimes called bush tomatoes, are great for canning large amounts of tomatoes at one time. Once the fruit ripens, the plant dies. Planting determinates at two week intervals is a good way to have a steady supply of ripe tomatoes for processing.

Indeterminates are plants that continue to grow throughout the tomato plant's life. Fruiting usually begins nearer the bottom of the plant and continues to flower and set fruit on up the plant as it grows. These are more vining than bush. At the same time on one plant you will find flowers, beginning fruit and ripe fruit that continues through the growing season -- usually until frost.

Most of the heirloom tomato varieties I have grown tend to be indeterminates, although some like Rutgers and Roma are determinates.

Thank you for explaining this @Smart Red So I should start getting another batch of my Mountain Princess together, as they say they are "Determinate". This is such good information to have!

We remove bottom branches and leaves that are yellowed or brown and then we sucker any and all suckers unless they have gotten so big that they are blooming, then we leave them alone. Never heard of removing all the branches up to those that bloom...wonder what the reasoning is behind that?

Never heard of it getting so hot that tomatoes don't fruit...that's a new one on me. It seems the hotter it gets here, the better they grow, unless we are in some kind of drought.

It's interesting to hear how other folks do their maters and I hope folks post pics later on when their tomatoes are in full fruit...I'd love to see everyone's gardens and plants.
D 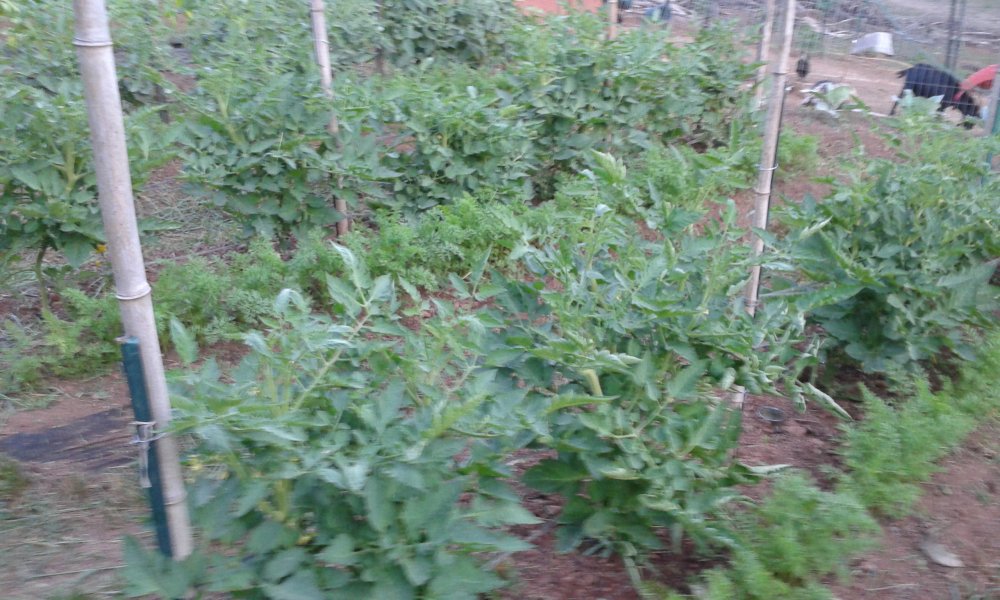 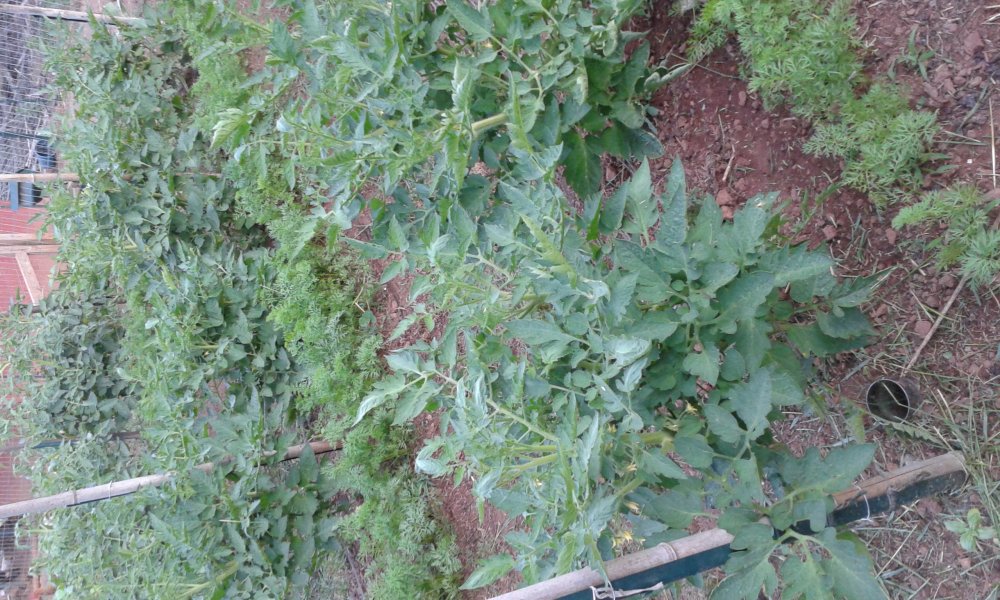 This is how my plants currently look.

This is the first year I am pruning my tomatoes and it is only the indeterminate ones that I am training on a string instead of caging. Even with that I have 2-3 main stems on my cherries that I am tying up. The reason I am even bothering is because we have such a long growing season here. In Ohio I just caged them. Here in GA my tomato season is twice as long.

Determinate have a set growing height/size (bush like) then it sets a lot of fruit and will die off. Indeterminate is more like a vine and not as bush like and will grow 6-10 ft tall and only dies off with the first frost. If you have a 3-4 month growing season you won't notice a difference in lifespan between the 2 types.

I have tomatoes starting to ripen in my garden now and should continue until Nov time frame. I am hoping to plant my determinate bed twice.

My tomatoes just have their first true leaves. I feel behind!

I've been eating black cherry tomatoes from a volunteer on my deck that started growing in January! Planted the rest of the seed grown ones yesterday. It's gonna be a couple of months for the next delicious tomatoes!

Just read this article in the newest edition of Mother Earth. Learned some things about pruning tomatoes that I never knew.


What are the different methods and impacts of pruning tomato plants?

Side shoots, or “suckers,” are additional fruiting stems that emerge on tomato plants at the junctions of the main stems and leaf stems. Some folks recommend that gardeners prune tomato plants by removing all tomato suckers; I disagree. Contrary to what many think, suckers don’t sap energy from the main tomato plant, and allowing them to develop will not delay fruiting or ripening of any tomatoes from the main stem. Judicious removal of some suckers, however, will lead to more controlled growth and make supporting the plant easier, especially with an indeterminate variety.

Removal of suckers could have implications for overall yields. Each sucker allowed to grow will provide additional flower clusters, and hence create additional chances for fruit set. Sometimes during the season, the majority of the flower clusters on a tomato plant’s main stem will open when the temperature or humidity isn’t suitable for pollination, which can result in blossom drop. If you’ve pruned tomato plants by removing all suckers, then the plant will bear only a handful of fruit, with no method available for the plant to produce additional flowers after the hot weather has passed. If suckers would’ve been maintained, the number of flower clusters would’ve increased, and flowers on those additional growing shoots likely would’ve opened later under more suitable conditions, thus increasing the yield of the plant.

Tomato suckers that are allowed to grow will also furnish additional foliage cover. In climates where searing sun regularly beats down on exposed, developing tomatoes, sunscald poses a definite concern. Because direct sun isn’t needed to promote ripening, the shade cover provided by the suckers’ foliage is beneficial.

Ideal management of suckers is somewhat dependent on the type of tomato. Determinate tomato varieties grow to a genetically predetermined height and width, and then produce flowers at the ends of their branches. In a sense, they are “self-pruning,” and any removal of suckers would reduce the potential yield of the plant. An indeterminate tomato plant, however, extends its main growing stem indefinitely and will generate suckers at each point of a leaf stem attachment. Indeterminate tomato plants can quickly grow out of control because the suckers themselves go on to produce suckers, so a plant can become dense and complex by midseason.

Skillful “topping” of fruiting tomato branches and stems at particular heights is a way of controlling growth. Because more flowers form than will pollinate and ripen before the end of the season, topping will also ensure that a plant doesn’t put energy into developing tomatoes that will never get a chance to ripen properly. Removing the top of the plant is also an excellent way to prevent plants from becoming so top-heavy that they topple in storms or develop kinks in their branches.

An easy way for gardeners with long seasons to extend the harvest even further and put removed suckers to good use is to cut and root some of the suckers. Suckers root easily and can be planted in early summer. They will yield tomatoes that are clones of those of the plants they were taken from.

To do this, cut a 6-inch-long sucker from one of your healthy plants and put it in a glass of water. After it has a nice set of new roots, pot it up in fresh potting mix and allow it to adjust in a shaded location for a few weeks before setting it into its final digs. Some gardeners have found that suckers will root directly in the garden if placed in a shaded area. Keeping the rooting suckers out of direct sun is important. Typically, a tomato sucker will root and begin to show renewed growth in a few weeks at most. Often, a sucker planted in damp soil will wilt just a bit until new roots begin to grow.

(Top) Photo by Stephen L. Garrett: Put tomato shoots to good use by growing them into more plants.

(Bottom) Photo by Stephen L. Garrett: Suckers left alone won’t sap life from tomato plants, so you don't have to remove them all.

I have never pruned tomatoes. I just let them grow. I cage, trellis, or tie them off tjr ground. This year, with moving, breaking new ground, the garden is already a mess, tomatoes not staked, looks like they will ramble along on the ground. I planted, then abandoned to build fence. Thanks to God for rain watering for me.
You must log in or register to reply here.
Share:
Facebook Twitter Reddit Pinterest Tumblr WhatsApp Email Link