If You have Trouble with Vine Borers

And, Butternut types have some resistance ...

... What do you think about Aehobak Summer Squash?

Here's where you find the other alternative with a link at the See Also to Aehobak.

this looks helpful for people who want to put the effort into it:

so far buttercup has been doing ok for us.

i will try some others this year. i continue to look for Tromboncinos seeds. supposedly if you like zucchinis if you pick Ts early they are supposed to be enough like a Zs that you might be happy with those instead. i can't say for sure as we are not a huge eater of summer squash (i would be if i grew some).

i'm also going to try some things this year to help with the borers. decoy, camo and scent hiding. we'll see if these work ok or not...

digitS' said:
And, Butternut types have some resistance ...

... What do you think about Aehobak Summer Squash?

if they'll survive borers they'd be worth a try for those who have no other alternatives. i'm not sure they'll survive as i see no mention of that in the description and usually if someone is resistant to bugs that are big problems it would be mentioned.

I suppose that it has to do with the vine type of this variety (Aehobak) of C. moschata squash and if it is similar to others in the species. This California seed company is the only one that I saw in a quick search that offers this variety.

Here is what Michigan StateU has to say about the vine borer's preference (link):

Vine borers are the reason I began growing Zucchetta Rampicante Tromboncino instead of zucchini. Borers sometimes attack it (there are visible holes w/frass) but the vines must have some defense, because after awhile, there is no sign of infestation & the vines are healthy.

The vines are rampant, heavily branched, and can get very long - 10 to 20'. They have strong tendrils; and to save space, can be trained to climb on a high, strong trellis (they take as much space as white-flowered gourds). Allowed to run on the ground, the vines root at the nodes wherever they touch, and can run 10' or more + branches. I prefer to let mine run, because those branched, heavily-rooted vines bear heavily in late summer. The yield is not as high if trellised, but it will greatly reduce the space required, and the 2-3' squash will be straight.

Like their relative the Butternut, all the seeds are concentrated in a bulb at the blossom end. The remaining length (about 80-90%) is solid & seedless... that is the part I freeze. The blanched or cooked color is an attractive light green throughout. The cooked texture is not quite as firm as zucchini, but lacks zucchini's soft center... so the frozen slices don't fall apart when cooked.

I last grew seed in 2009, and because of several seed crop failures due to weather, it is way overdue for renewal. It had good germination last year, though, so should still be OK this year. The original saved seed was from a hand-pollinated cross of the two vines with the longest squash, which preserved those qualities. I've nicknamed them "hoop squash" because grown on the ground, they will curve back toward the stem end, and I can just hang them on my arm as I harvest. 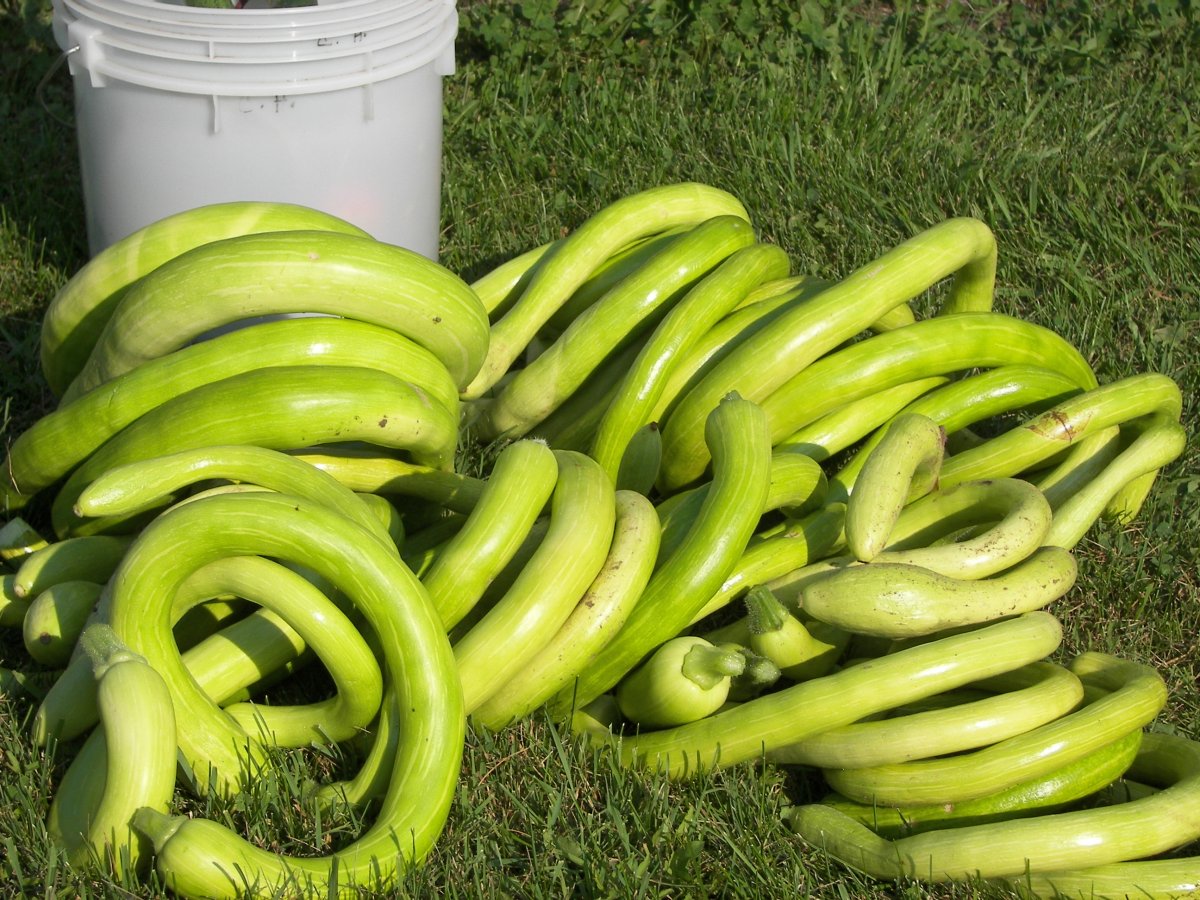