(I wasn't sure which thread (ya, on my own forum ) to put this thread... but learned lucky bamboo is a type of water lily, so I figured flowers was closest?)

I received a lucky-bamboo plant from a friend 5 years ago. Surprisingly, I've actually been able to keep it (mostly) alive.

The first couple of years of it's life, it was in a rock-base. Then when the rock-base got slimy and a stalk or two died, I moved it to water-only for a few years. Then I tried water gel crystals (sodium polyacrylate) for a year or so, and that worked mostly ok, but then went back to water.

Here it is around 2018 when I had split the stalks apart since some seemed like they needed quarantine: 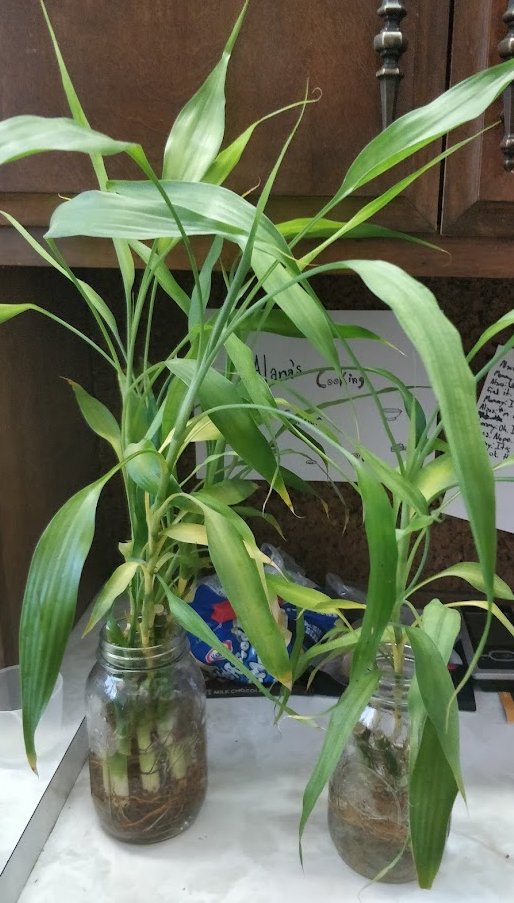 Unfortunately, over the past year I've neglected them a bit (didn't change the water, too much/too little water, not enough sun, etc.), and another stalk has almost completely died.

I think I probably started with about 10 stalks, but now have only 7... with one pretty much dead.

I thought I might try to save parts of the one dying, so did a bunch of research... and then decided while I was at it, to go ahead an split-up a few other stalks and see if I could get back to my original 10 or more

So, here's what I'm left with after cutting strategically: 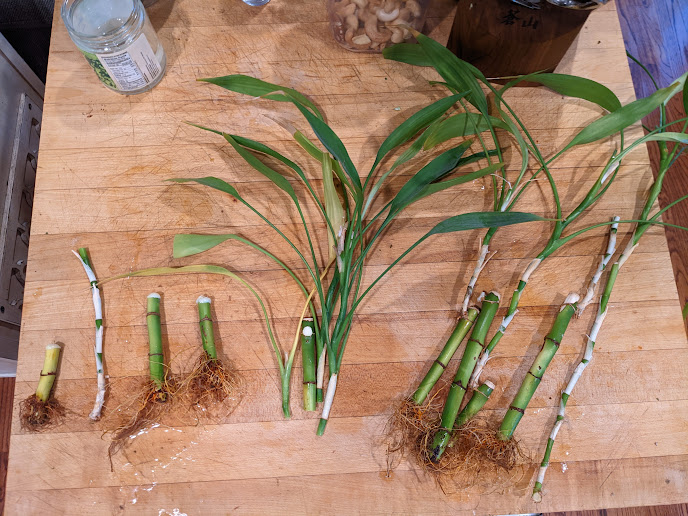 ... and I'm putting them in different containers just in case one might have bad fungus or something in it, and it doesn't contaminate the others: 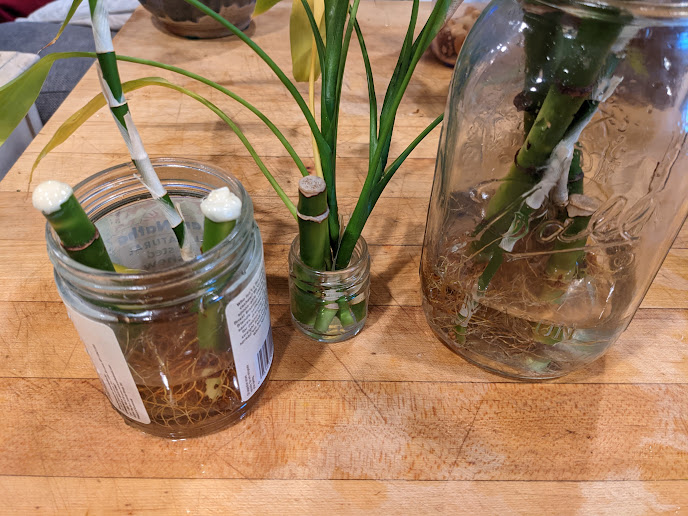 I'm determined to take better care of them now, and hope they will look as good (or better) than they were 5 years ago!

Any tips / suggestions along the way???

i've never grown it myself, but in reading a few articles it looks like it could do ok in potting soil if the soil is kept moist enough. i also saw one mention of overwatering so that was kinda interesting for a supposed water loving plant (i'm not sure what to think of that other than perhaps reading other articles instead )...

so... perhaps give it a try with a few of those rooted sections in some potting soil and keep it moist enough and see how that works?

why i say this at all? to me a bowl of water is going to have less diversity than potting soil and when you speak of worrying about diseases the best disease controls are by having a diversity of organisms.

flowerbug said:
i also saw one mention of overwatering so that was kinda interesting for a supposed water loving plant
Click to expand...

From what I read, it was when the water-level was too high on the plant. Submersing the roots was fine, but not high up the stalk.

flowerbug said:
perhaps give it a try with a few of those rooted sections in some potting soil and keep it moist enough and see how that works?
Click to expand...

Ya, once these take-root, I may test-out using some soil.

Secuono with her pond garden and Phaedra with her greenhouse and propagation experience.

Steve, wishing You Luck with Lucky

Secuono with her pond garden and Phaedra with her greenhouse and propagation experience.

Steve, wishing You Luck with Lucky
Click to expand...

Unfortunately, the aquarium world has soured my interest in the plant. As many think it can be grown fully submerged, but it can't. I had one 20yrs ago, when my mom redecorated my room japanese style, but I don't remember actually caring for it.
Sorry, I can't help with it. But it's got to be easier than motherinlawtongue plant. Those things hate me...

I've been reading-up and watching more videos. I *think* I should be ok moving forward since 1) I've kept them mostly alive for 5 years, and 2) I'm going to be more diligent about care.

One thing I'm also trying to decide is around propagation and rooting compounds, etc.

All the videos / articles talk about being REALLY mindful about the water used for these plants.

In the SF Bay Area we don't get a ton of rain this time of year, but we've been getting a few tiny showers.

So, I thought I'd have some fun... and went and put a bunch of bowls / pans to catch the little water that I could, so I could use it for my lucky bamboo

It's probably confirmation-bias, but it always seemed like my plants loved / reacted to rain water better than anything else.