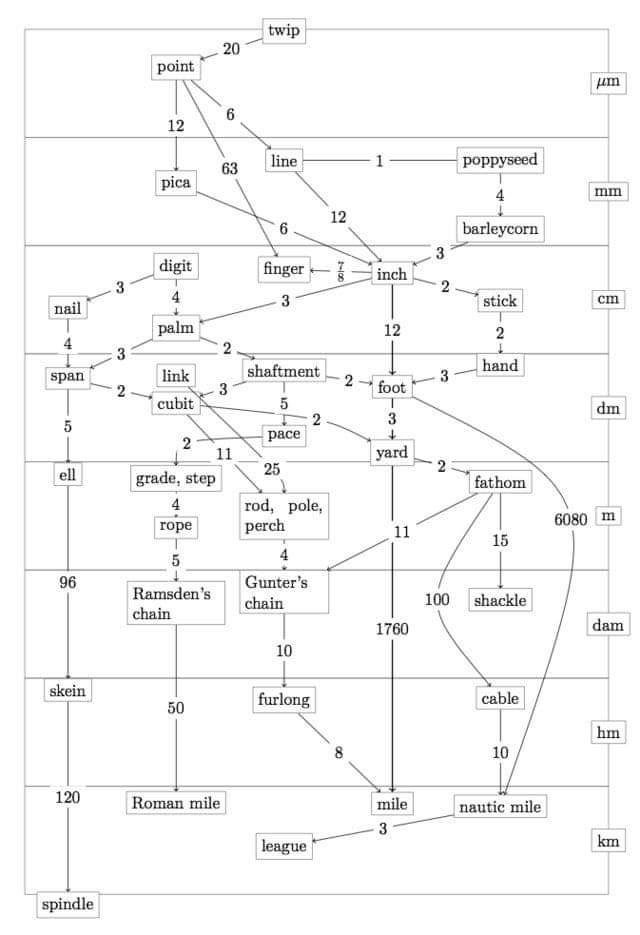 Wow, many of those I haven't seen before. Does this chart tell what region or era those were used in?

WOW!!! Always wondered how long a furlong was! Very interesting! Thanks for posting.

Hecks Fire, This is for the U.S.

A chart of Imperial and customary units. We use Imperial (colonial) measures. "Customary" = common for the United States. Truth. I was so confused trying to understand why we use 5,280 feet = 1 mile, I gave up.

I Think the foot was gauged from an English King, maybe Henry VIII, but I won't swear on it. 1 mile is an ancient measure from the ancient Romans.

What’s the origin of miles and yards?

Dear Cecil: I understand a few of the reasons behind our complicated English measurements. For instance, an acre was the area plowable in one day using draft animals. But where, pray tell, did the...

www.straightdope.com
"It originated in the Roman mille passuum, a thousand paces, or more precisely, a thousand strides. Each pace consisted of five Roman feet, giving us a mile of 5,000 feet. Since the Roman foot (the pes) was smaller than today’s foot, the Roman mile was about nine-tenths the length of our mile. "
Since the Tudors lengthened these measurements and created the modern day "foot", a mile --
"Unfortunately, the English also had the idea, for reasons we needn’t go into here, that a mile consisted of eight furlongs. The furlong, short for “furrow-long,” is said to have been the distance a horse could pull a plow before having to rest. Its length was a matter of confusion for quite a spell, but by the 16th century folks generally agreed that it consisted of 40 rods of 16-1/2 feet each, or 660 feet in all — and of course eight furlongs was 5,280 feet. "

Steve, I see you were featured as a unit of measure. Way to go!

i learned about carats the other day...

flowerbug said:
i learned about carats the other day...
Click to expand...

Ah Yes, one carat=one carob seed. (for those without access to carob seeds, seeds of their close cousin the honey locust work just as well)