My summer garden classes for kids

I have been wondering as well. Thistlebloom, front and center. (Please)

majorcatfish said:
sitting here in my motel room watching it thundering and lightening of course having a cold beer waiting for it to stop so I can run over to Smithfield's to get dinner. Read a post on lettuce and started to wonder on how @thistlebloom kids gardens are going??? How about an up date with photos!!!!
Click to expand...

Weeellll....I can do that Saturday! Our classes were sort of suspended while everybody went out of town or had company, including me, but I'm hopeful that they will be able to come Saturday and we can learn a few things.

The pumpkin vines are getting a little powdery mildew so we can talk about that and what options we have for treating it. The beans need picking and the weeds are coming back strong. The corn is tasseling and the sunflowers are about 8 feet tall. It's looking pretty healthy and lush!

I bet the sunflowers are a big hit.

I moved the classes to Wednesday to accommodate family plans on the weekend...one half went on a last minute camping trip Tuesday through Thursday so I only had two sisters show up anyway. Oh well.
But we had a great time, it was hot so we did some work in the garden first then retreated into the house to work in our notebooks.

Took some pictures too!

There are at least a couple pumpkins developing on each kids vine, some are starting to orange up. I'm really hoping for enough season left for them to finish. 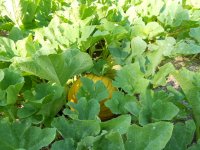 The Strawberry popcorn is tall and tasselling. 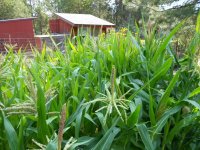 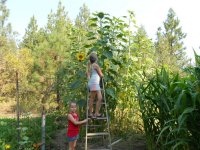 The sunflowers are starting to bloom. The girls were so delighted by their height.

They picked a bouquet for their mom. 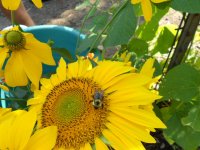 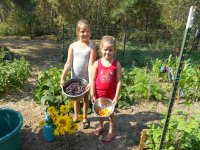 It's amazing how productive a few short rows of beans are.
Do we really have to eat all these? 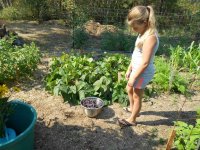 She's not a bean lover.

I included a couple of non garden pics too.
This is what one little gardener loves to do when I'm not cracking the whip
in the garden. 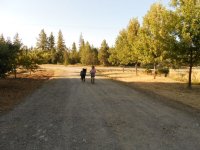 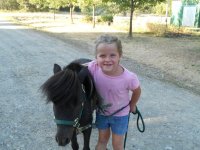 I do not know who is cuter. The toothless grinner or the pony ! A tie. Watch your mail @thistlebloom a little something for you and the kids should arrive soon.

way too cool ...somebody had fun playing with the pony... next time you see the girls tell them a old fart from north carolina is jealous of all their hard work and harvest...

Those pumpkins look hugh! Hope they are ready by Halloween. Those are some great shots. That little girl sure is having fun with that pony!

I so enjoy seeing the results of your summer gardening adventure. Children are so much fun to engage and work with. Lucky them; lucky you.

What a great experience for 'your' kids, @thistlebloom . The gardens look terrific, and Holy cow look at those sunflowers! Very proud of your kids! But I think a little prouder of you, for planting a 'seed' that will grow on, long after the harvest...

I keep in touch with a few of my former daycare kids. Little Timmy rarely seemed interested in our garden activities. Big Timmy (now 28) told me that the first thing he bought for his house was a tiller. He bought his parent's house, right around the corner. I might be stealing some of his tomatoes!

Today was garden class day, and I once again gave everybody a reminder of the new day and time several days in advance. 3 kids from one family made it, but none of the other families kids came... mom said she forgot.
Obviously it doesn't mean as much to the parents as it does to me.

In spite of my disappointment we had another great class. We reviewed all of our Big Fat Words and the kids did an awesome job of remembering the definitions.

Today our BFW was pollination. We discussed it as they wrote in their garden journals, then a while later I quizzed them on it's meaning.
One gardener squinted her eyes hard as she concentrated and said "Isn't it something that bears do?"
.............um...what?

Scrambling to try to understand what she might be meaning I said...."No. Well... maaaybe unintentionally..."
"Well, what is it that bears do then?" She queried.
Slowly the light dawned. "Oh! do you mean hibernation?"
"That's it" she smiled.

It's always a good time no matter how many kids show up!

The pumpkins have a raging case of powdery mildew so we got to talk about what that was and they each took a turn spraying their pumpkin leaves with some horticultural oil.
Bean picking continues and they got another big batch to take home much to one gardeners disgust. Haha!

The huge beautiful sunflowers are a big favorite and there were lots of bumblebees working the blooms.

The popcorn was buzzing with the honeybees working the tassles and they were rapt with attention when I told them some simple facts about their life cycle. The girls were sad that the drones didn't help out with the nectar and pollen collection. They all thought the pollen baskets on the bees legs were cool. We gently captured one in a small bug box so they could look at her up close with their hand lens, then released her and told her to get back to work.

They were so impressed with the bees docility as they worked. I stroked one lightly as it crawled about on a sunflower. The boy gardener has a fear of bees and he had a small change of opinion about a honeybees scariness.

@journey11 's heirloom beans are growing like little rockets, and the kids picked and ate the beans on their plants. The boy wanted to take his home to share with his parents.
@Chickie'sMomaInNH , your Glass Gem corn is growing well, but it's going to be a close race to beat the frost.

@jackb , your Florida petites are loaded with fruit and the kids each picked a ripe tomato to eat from them today.
@majorcatfish .... there is only one little lonely red leaf lettuce growing in the lettuce patch. I had a miscreant hen get out last week that hid in the brush and I didn't get her caught until evening when she wanted to get in the coop. I'm afraid she snacked on and scratched up the baby lettuces that were growing.
@ninnymary , your Scarlet runner beans are so pretty growing over the arch. We are going to save seed from them for next year.

One of the kids asked if I was going to teach a garden class next year. I said I would love to if there was any interest in it. She said she loved the garden classes and really wants to do it again next year. So...

that made me happy.