A.k.a. hull-less. The green ready-to-eat seeds are often sold in the U.S. as pepitas. There are several commercial hull-less varieties & several heirlooms, most are the "Styrian" type. Those pumpkins generally have dark green seeds in large, mostly empty seed cavities. Has anyone here ever grown naked-seeded pumpkins?

This year I am growing one variety ("Little Greenseed") originally sent to me in 2011 by Ken Ettlinger of the Long Island Seed Project. I grew it, and found it to be very unstable. After reporting this issue, Ken sent me new seed, which I grew in 2012 with the same results. There was a wide range of crosses, and only a few plants yielded completely hull less seed. However, the two best plants were OUTSTANDING. Those pumpkins were just over softball size, thin shelled, heavier than they looked - and densely packed with completely hull less dark-green seeds. Lots of seeds, and unlike the large Styrian types, very little flesh to waste.

LISP, when I contacted them, admitted that Little Greenseed was a work-in-progress, and was not completely stable. They apparently never completed this project, and their website - while still visible - has been inactive since 2012. Furthermore, no one else appears to be growing Little Greenseed other than Salt of the Earth Seeds , who obtained their original seed from LISP & admits to not having stabilized it either (their seed looks worse than mine). All the other online references to it I could find are the same age as the LISP site - so except for SotE's strain, I may have the last surviving seed for this variety.

I froze a large amount of seed in 2012, from the last year of a multi-variety naked-seeded pumpkin trial. That year working hours prevented me from hand pollinating, so all of the seed - while saved from the plants with desired traits - likely contains additional crosses (some perhaps with the other pumpkins in the trial). Hopefully, the desired traits can still be isolated... but it may require a large population to do so. To anyone who may want to take part in this project, I would be happy to provide seed & full details. This variety is well worth saving (I'll post a photo of the seeds when my phone has charged.)

sure! i'm a sucker for such things. what's one more squash plant? i won't be hand pollinating so crosses may happen to them too, but eventually it may be stable enough anyways.

I tried a "naked seed" in the 70's and they were way too chewy to eat. That's awhile ago , maybe things have improved.

Checking online, yours is a C. pepo, Zeedman. That may be a very tough one to isolate without special measures taken given that zucchini are such a common garden plant. The one I tried was also a C pepo and I may have had zucchini or Jack o'lantern pumpkins that year. Since the seeds are "offspring," crossing might have been the problem with the seeds for eating.

I've read that pumpkin seed oil is a common cooking oil in central Europe. Those Styrian types are also C pepo and must be grown in great numbers in Europe. However, Mexican cuisine makes use of pumpkin seeds and those are C argyrosperma, Cushaw pumpkins. (Only reading about these so consume properly toasted and with a grain of salt.) Perhaps those would easier to contend with since the Cushaw is uncommon in the US.

digitS' said:
Checking online, yours is a C. pepo, Zeedman. That may be a very tough one to isolate without special measures taken given that zucchini are such a common garden plant.
Click to expand...

That is correct, @digitS' ; C. pepo is probably the hardest squash to save pure seed from, given that it is the most commonly grown species, and is bee-pollinated. Acorn squash, spaghetti squash, hard-stemmed pumpkins, most summer squash, and warted gourds are all C. pepo. And cross they will if not prevented from doing so - even over a great distance. I once saved seed from an acorn squash, in my rural garden. This was on a 10 acre property, and there were no other gardens visible within 1/4 mile. Yet when I planted that saved seed the following year, there were several crosses... apparently with a pumpkin & a yellow zucchini.

digitS' said:
I've read that pumpkin seed oil is a common cooking oil in central Europe. Those Styrian types are also C pepo and must be grown in great numbers in Europe. However, Mexican cuisine makes use of pumpkin seeds and those are C argyrosperma, Cushaw pumpkins. (Only reading about these so consume properly toasted and with a grain of salt.) Perhaps those would easier to contend with since the Cushaw is uncommon in the US.
Click to expand...

I've read the same about C argyrosperma (formerly C. mixta) but have never to my knowledge seen the seeds... unless they were mechanically hulled. Never seen anyone in my area growing them either, I've seen cushaws growing on SSE's farm though. They look similar to very large, heavy butternut squash - and have huge vines. Cushaws are heat lovers, and more commonly grown in the South. I don't believe their seeds are hull less though; and since I'm not a fan of eating hulled pumpkin seeds, I probably wouldn't grow them only for that purpose. Not fond of the rampant vines either, especially when I just cut the size of my gardens by 1/3... still, I might try them after this project. SSE does offer quite a few varieties.

I realize there may be few takers for this project, because this is actually breeding, and involves fairly advanced seed saving techniques. To save pure squash seed requires blossom bagging & hand pollination. This project goes one step further; because to select & purify a squash from a crossed population, the female flowers must be "selfed" by male flowers on the same plant. This is not as daunting as it sounds... flowers which will open the next day are bagged or enclosed in the evening, then hand-pollinated & re-closed in the morning. For anyone interested, I would be happy to provide detailed advice throughout the season.

There are quite a few veteran seed savers here... if even one or two people could help, it would probably cut years off the time it would take for me alone. I fully anticipate that stabilizing this variety will take several years, @Artichoke Lover so this project will be ongoing. @flowerbug , I'd be happy to send you seed for you to grow, whether or not you hand pollinate; but it will contain a lot of off-types.

Zeedman said:
@flowerbug , I'd be happy to send you seed for you to grow, whether or not you hand pollinate; but it will contain a lot of off-types.
Click to expand...

if you have plenty send me enough that i can pass it along to others too and we'll see what happens. i'm patient and persistent and don't mind odd things happening as long as it doesn't hurt anyone else.

but let's wait a bit on sending anything because there are a few soybeans and perhaps beans that may also be worth in getting if we're going to send something... you mentioned last year about soybeans you want to have others help you with...

I finally pulled the frozen seed of "Little Greenseed" out of the freezer, just long enough to take a photo: 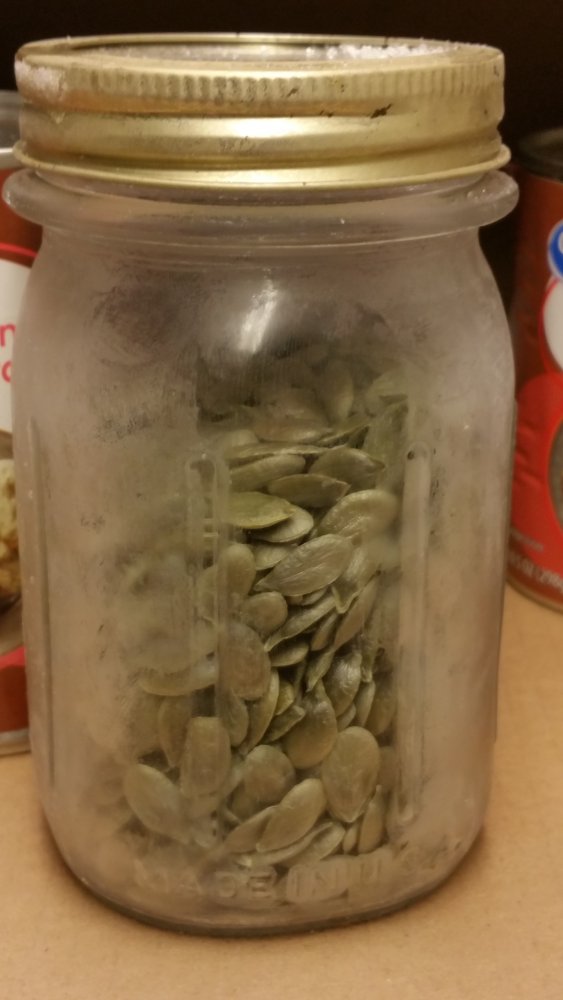 I'd like to do a germination test, but hesitate to do so. That would require warming up the whole jar, which could possibly bring the seed out of dormancy... something I'd prefer to do just prior to planting.

I just bought a bag of Pepitos on clearance at our local chain grocery store. Bob's Mill brand. I like them in salads for extra crunch.

We use those hull less pumpkin seeds in several bread recipes, ground as part of a multi-seed hot cereal, in cookies, and in salads. Thus far, because our supply is low, we've used them sparingly. I'd love to be able to grow a pound of seed per year & eat them more often.

I bought a packet of hull less pumpkin seeds from etsy, it's called kakai. Have you heard of that variety?
I'd be happy to try yours as well. I also grow other squash so they will cross pollinate. Let me know if I can help.
You must log in or register to reply here.
Share:
Facebook Twitter Reddit Pinterest Tumblr WhatsApp Email Share Link