Well, it took a long time, but I've finally opened up all the pumpkins. I have to say, I'm delighted with the quality of the seed -- they're more like the small, plump pepitas you buy in the store than anything I've ever harvested from a Styrian.

I'm afraid that none of the flowers I hand-pollinated took. I did it in a hurry, then left on a business trip, and when I got back they'd all aborted with not enough time left in the growing season to try again. Add to that the fact that this is the first time I've ever tried to hand-pollinate cucurbits. So I'm really sorry @Zeedman that my participation this year can only be a seed trial rather than part of the effort to stabilise the line. I do, however, still have a bunch of seeds for next year.

Unfortunately these two didn't have enough water, or rich enough soil (new garden plot), or something, so they only produced a couple miserable fruit.

All in all we harvested 2.6 kg of seeds, which is great! It seems that lot 2021-04 is both the most stable (with a sample size of 2 plants at least) and the closest to the breeding target. All pumpkins turned a beautiful orange -- I planted the seeds on 5 June and harvested on 10 October.
Last edited: Nov 26, 2022

I purchased the Baker Creek Whole Seed Catalog for 2023.
I probably won't buy another, BUT, NOW I know what a "naked seeded pumpkin" is.
Last edited: Dec 5, 2022

Will I get cancelled if I show their photo? 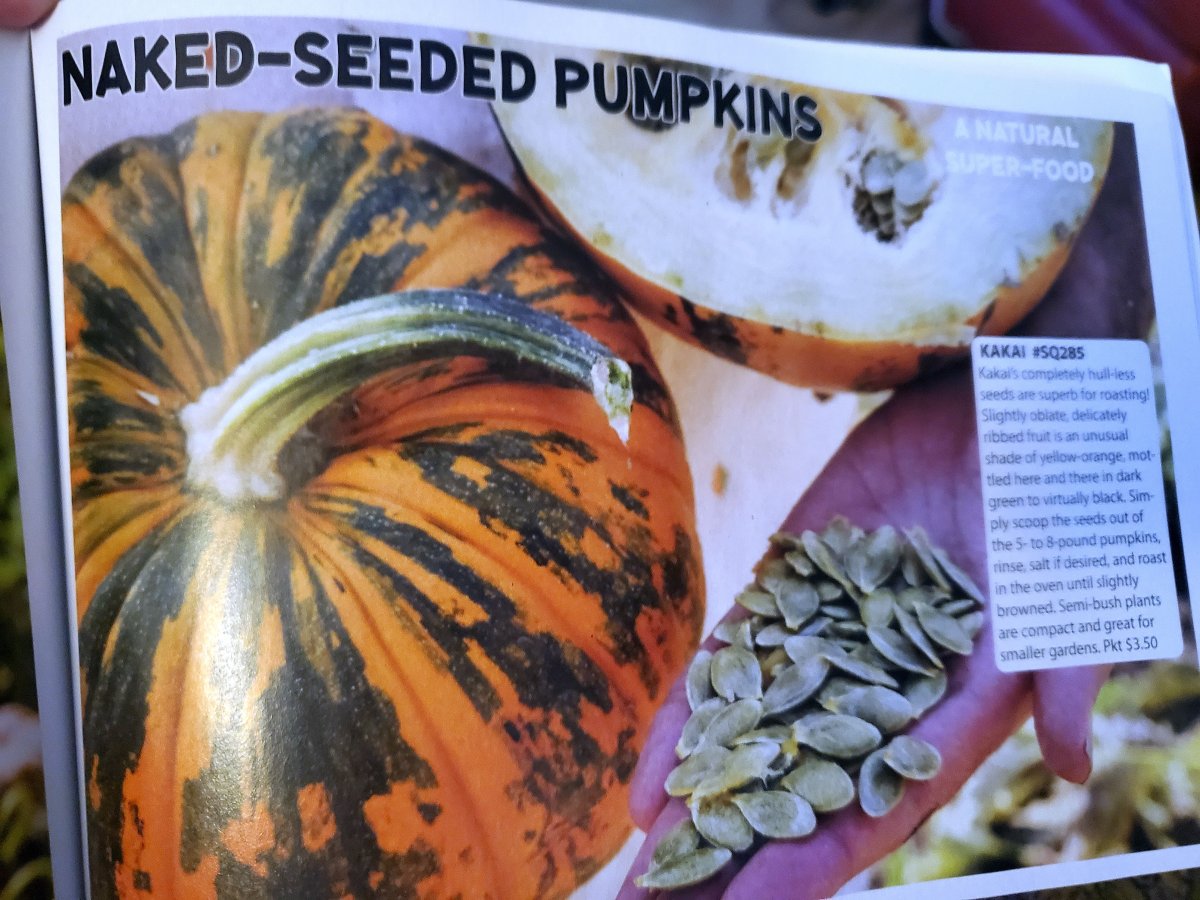 Kakaii was one of the 4 naked-seeded pumpkins in my original trial. Nice large seeds; but IMO too much waste, and the seed/waste ratio was too low. Those could (usually) be broken open by dropping them on a hard surface though.

it was in this thread or previous mentions of these green seeded pumpkins that @Zeedman talked about seeds sprouting inside the squash. i'd never seen that happen in any squash i've ever grown before until today when i cut open one of the squash i had in storage here.

what surprised me the most about this aside from it happening at all was that the sprout came through the side of the seed and not out the seam or the end.

oh and it wasn't just a single seed but a fair number of the seeds in that one squash. it hasn't been particularly warm in here (we keep it at 68F during the day and down to 63F at night and the squash are sitting on the coolest spot in the house (near the front door on the tile floor)).
Last edited: Jan 3, 2023

I haven't put together an update yet, but I opened all of the "Little Greenseed" pumpkins in December. There were no hulled or sprouted seeds in any of them.

Well, sweater lightning reminded me that it was time to finally put the last seeds away. So after weighing the Little Greenseed harvest, I had a total of 24 ounces of seed (1# OP, 8 ounces hand pollinated) from 7 plants. Better than I had hoped for, given their very late planting. Because some pumpkins were harvested only partially ripe, the seed quality was variable... but the strong resistance to sprouting during storage allowed much of the seed to plump up during the 2 months on the shelf. 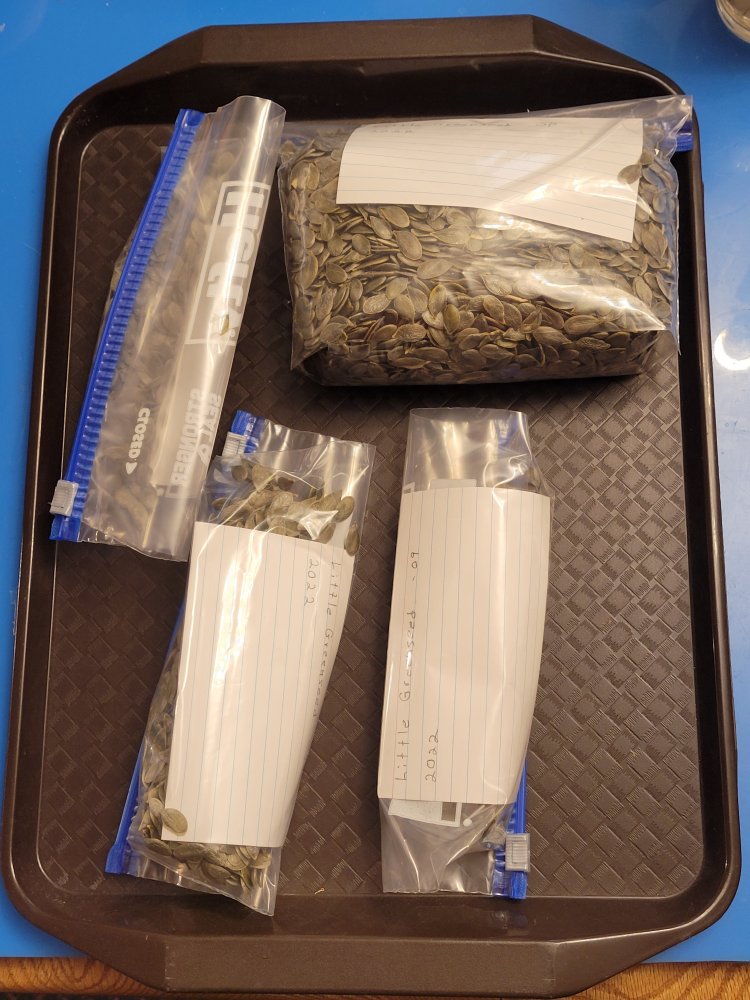 I was able to save hand-pollinated seed for the -2, -4, and -9 lines; but none of the -8 pollinations took. Some of the OP pumpkins were a little larger than the target, but still hull-less. This was too small a planting to be fully representative of any genetic variability; however based upon my observations, any of these lines could be usable even as is.

I hope to plant a second grow-out this year with the original segregations (especially the -08) to further explore the variability of each line. That, and because of the close planting & dense foliage last year, I'm not 100% certain that I was able to successfully trace each of the hand-pollinated pumpkins back to the right plant. Regardless, all of the saved seed was from pumpkins which met the target parameters - just not as fat as I would have liked, due to the late planting.