Secrets to growing one of my best potato crops

I quit growing them due to poor harvest and nematodes. So I’m planting my sweet corn trying to get an early crop-another story for another time. Out comes DW with 8-9 potatoes she bought that had started to germ. Plant them.... I’m thinking waste it time and space. But there she is. Not dying on this hill..... so I plant them. They don’t come and don’t come so my early sweet corn got frosted so I tilled area to plant again. You guessed it, forgot the potatoes..... who cares? I never weeded them, let corn grow over them. Today while pulling weeds, this is what I found. Still have more to go. 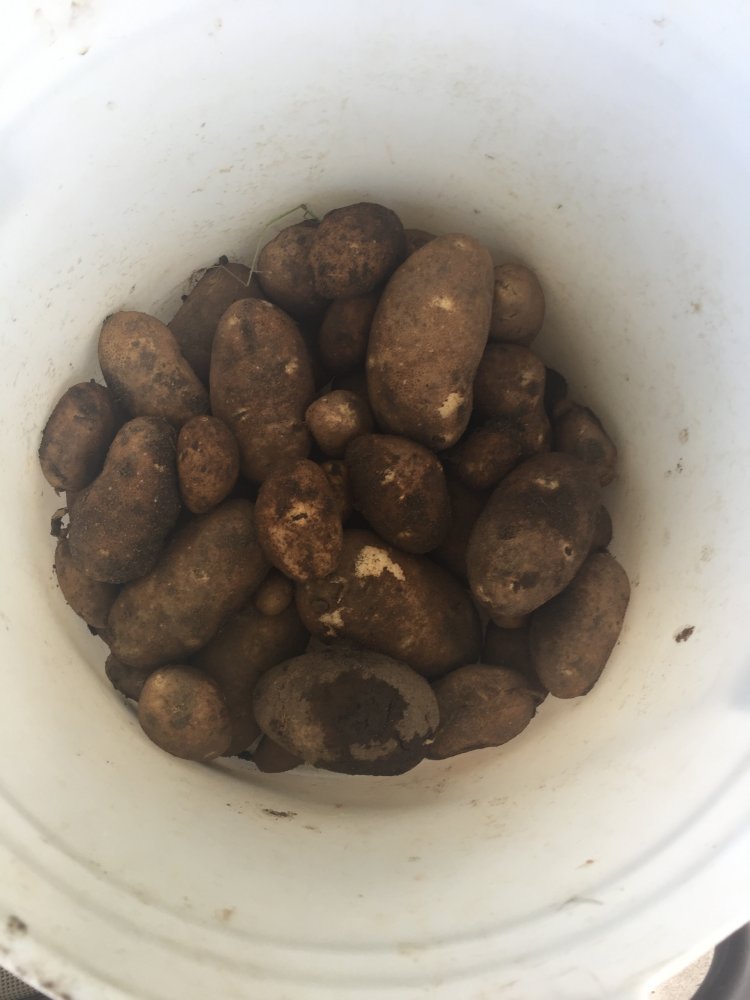 While pitiful, better than past years. & from about 6-7 potatoes that were going to waste.

Last year, I grew potatoes on ground that had not grown anything but weeds for 4 or 5 years, while being tilled by the tractor guy. Before that, it had been a grass hay field.

There was a lot of organic matter in the soil. I didn't put down any fertilizer. The potatoes did far better than I expected.

Previously, I had ground used for a garden for a couple of decades. My technique was to do no fertilizing until the potatoes needed hilling then, use straight compost. I had a nice compost pile in that garden and 100% of it was used for hilling about 100 + sqft of potatoes.

With both approaches, harvest was about the same - the old garden with lots of compost and the new ground! They seem to really benefit from organic matter.

This year, I'm using ground that has been in continuous production for years. To use compost for hilling, I would have had to load it in the back of the pickup and haul it out there. Instead, I decided to till a lot of loose soil in the path and really pile that around the plants, deep. It ain't gonna work!

The plants are small. There were plenty of new potatoes under them that we brought home, none as big as a tennis ball. I'm wondering if what is still out there are gonna get much bigger.

Organic matter. The Irish would cultivate soil near the coast and haul up seaweed for mulching potatoes. I bet that worked well.

@digitS' I won’t enjoy. I can control my diabetes by diet. Potatoes go straight to sugar and I spike. Wife will enjoy.

Too bad, but if potatoes make your blood sugar spike, that means no potatoes. Diabetes sorta runs in my maternal family, but not until after age 80. My great grandmother lived with diabetes to age 102, my grandmother was 88 when diagnosed, she lived to age 96. I'm not too worried about it.

I heard recently from someone who gives himself up to 5 shots of insulin each day.

Could I possibly have understood that right? I had no idea!

Back to potatoes: a potato farmer once told me that they are one of the most digestible of foods. That means that for children and some older people, they can be of important use. Apparently, that can also cause a problem for others.

60’s for dad’s side of family. I don’t miss potatoes that much but do miss desserts that I grew up on.
Agree potatoes are highly digestible which is why diabetics get a fast sugar spike when starch is converted to sugar.
You must log in or register to reply here.
Share:
Facebook Twitter Reddit Pinterest Tumblr WhatsApp Email Link