My tomato seedlings are growing under high-bay fluorescent fixtures, with 6500 K T-8 bulbs. The pepper & eggplant seedlings look normal, but some of the tomato seedlings are acting oddly, spreading out horizontally in all directions. It is not a question of phototropism, since the trays are completely overlapped by the lights. Neither is it damping off, because the seedlings, while growing sideways, are healthy. Any ideas? 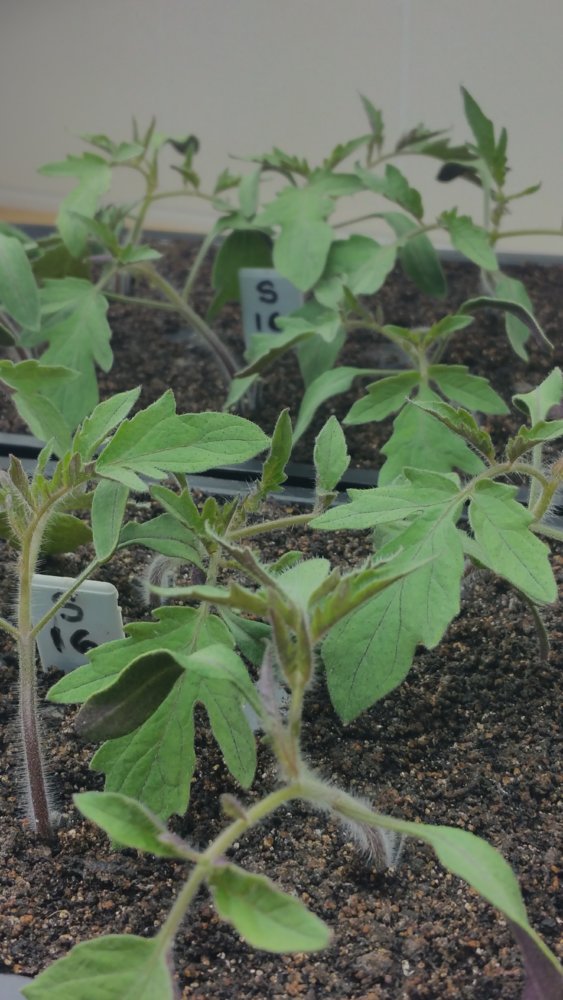 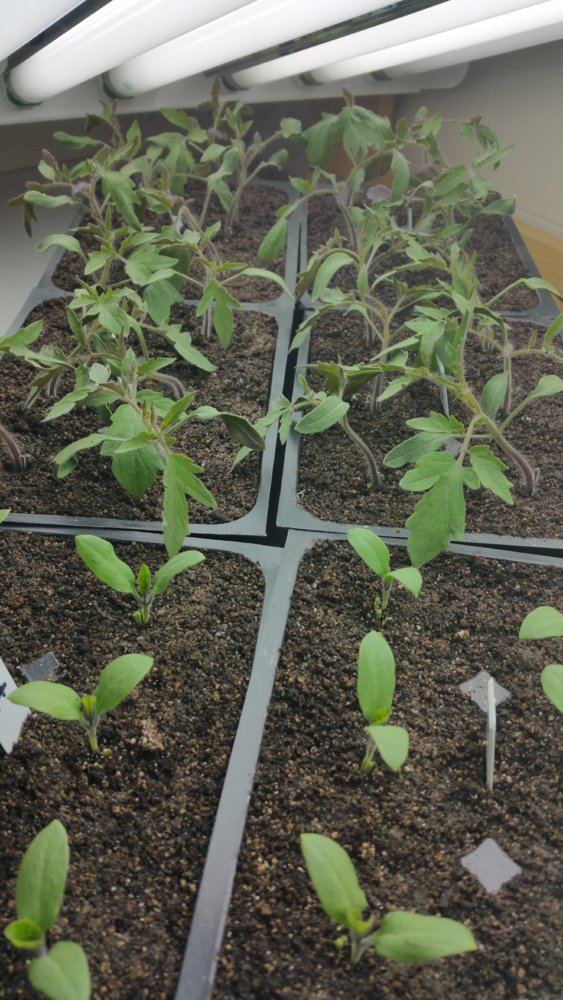 Cause? I know nothing about lighting. It does look a little chaotic in there. We can assume that you have ruled out air movement, right?

Difficult to judge leaf size in a photograph. The stems look okay.

Could there be a fertilizer imbalance in the starting mix?

Is there light coming from windows? Any cats? How deep did u plant the seeds?

They look like they are growing to the light to me but I don't see how with your lights. Are you knocking them over when you water?

they look mostly ok to me. i wouldn't worry about them.

digitS' said:
We can assume that you have ruled out air movement, right?
...
Could there be a fertilizer imbalance in the starting mix?
Click to expand...

Not a problem with air movement, no air circulation there at present other than convection caused by the lights (not using the fan yet). I doubt that it is a fertilizer issue, since some varieties in the same tray are growing normally.

seedcorn said:
Is there light coming from windows? Any cats? How deep did u plant the seeds?
Click to expand...

Very minimal light from the adjoining glass doors (connecting to a patio) but there is no tendency to tip in that direction. No cats... I'd have to lock them out of that room if I had one! All of the seeds were planted about 1/4" deep in groups of 4, and germination was surprisingly good, given that most of the seeds were 5-6 years old.

And by the way, when thinning the emerging seedlings, I cut out any which appear more vigorous than the rest, since those are the most likely to be crosses.

Ridgerunner said:
They look like they are growing to the light to me but I don't see how with your lights. Are you knocking them over when you water?
Click to expand...

I water from the bottom. However, I do stroke the plants roughly with my fingers at least once a day, to simulate wind & strengthen the stems. Just started that a few days ago, when the seedlings had their first true leaf. It helps to keep the plants stocky. Kind of hard to stroke the plants which are fully prone, though.

There is a big difference in behavior between different varieties, so this is at least partially variety dependent. All are indeterminate (except for one semi-). Some varieties have been straight from the beginning, some seem to be gradually straightening, and a couple remain mostly prone. Although the two most severe cases are non-red (one orange, one "black") they have different leaf styles, and most varieties are affected to some degree. I can find no common factor.

Could this be negative phototropism, the plants reacting to 24-hour light by moving away from the lights? I started with that cycle because I planted the peppers a little late & wanted to make up lost time - which it did. The tomatoes really responded to the extra light, hard to believe they were planted only 2 weeks ago. All of the plants (peppers, eggplant, tomatoes) are on the same timer; at some point, I may need to find a place for a second timer just for the tomatoes (and I assume tomatillos as well). I've started cutting back the timer; to 18/6 now, and back to 16/8 in a few days. The fan will be on during the "off" hours, when there is no heat convection from the lights.

The seedlings look very healthy; but if they remain so intertwined, it will be a bear to untangle them when transplanting. They might need some training.

Or maybe they are just trying to get some separation distance?

Curious how that popped into my head...

I'll watch their behavior for the next several days, to see if those laying prone try to root. They shouldn't, unless the soil is too wet.

Could be. Social distancing and all.....