I'm really saddened for all of you suffering so very badly. It's unbearable even thinking of you all living through it, I don't know how you cope. Paradise broke my heart what we saw here was like a horror movie.
How's it where you are now, are there any signs of improvement? The last I read there were 33 deaths, there must be a lot more than that. People with breathing problems the disabled and those lacking transport. I don't get why the lightening strikes are occurring.

Gosh, how self centered I am right now. I'm barely aware of a hurricane coming at you all.

Just surviving the smoke without choking to death. I better go watch some news, Rhodie....

@marshallsmyth , earlier our sun was almost out: 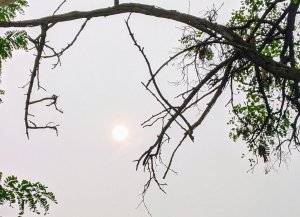 Rhodie Ranch said:
Gosh, how self centered I am right now. I'm barely aware of a hurricane coming at you all.

Just surviving the smoke without choking to death. I better go watch some news, Rhodie....

You are not selfish, these lovely people are on your mind . Same here . Take care of yourself.

@Rhodie Ranch and everyone, the Atlantic Hurricane WS office is a place to start with hurricane news LINK. They are a little busy right now, tracking 8 storms at the same time. If you are looking at that map and wondering where #8 is - it's in the Pacific.

It seems that since yesterday, they have named another 2 and have only one more to go (Wilfred) before they run out of the 21 names that they have assigned for 2020. What will they do??? Start over with Alpha, Beta, Gamma ... This last happened in 2005.

Sally is crawling or churning, depending on which news service you are reading. A Category 2 now and expected to hit land east of New Orleans. Because it is moving so slowly, Sally may pull a huge amount of rain into the Gulf states. The WS Mobile/Pensacola office should be the one for up-to-minute news today. Let me take a guess - they will have a torrent of rain, Sharpie or no Sharpie.

The air here has cleared enuf to be out of the 400's but still in Hazardous range. Gee, they have me hoping for Very Unhealthy ...

Steve, I looked at those seven invests, depressions, storms, and hurricanes this morning. Sally is the only one threatening the US in the foreseeable future. There are a couple they need to watch but they are so far out they haven't predicted that far ahead. @Marie2020 is more likely to get a little weather out of some of them than we are, hopefully just some rain and light winds. These systems tend to wind up headed east and north so remnants can hit Ireland or parts of the UK as squalls or just rainy blustery weather

Sally's forecast has changed. Two days ago we were in the area that could get up to 10" of rain. Now there is a fair chance we will not see any rain from her. We could see 30 mph winds for a while, not bad at all. That's how much they can change. The steering air currents were weak to start with and they seem to have died, so she is just sitting there. The current projections are that she will eventually move north, probably hit the Alabama coast midday tomorrow, maybe a Category 1 hurricane or hopefully a tropical storm so winds are a little less strong.

But the winds aren't what worries me about this one. The longer she sits there and the slower she moves, the bigger the storm surge will be. That can be devastating near the coast. But Sally is a rainmaker as she is moving so slowly. She is expected to dump a lot of rain, expect to see some pretty heavy flooding inland. Maybe further inland than you would think.

Steve, I did not see any computer models on your link. Maybe they are there but I just didn't see them. They use different computer programs to try to predict where a storm will go. All the models agree that it will hit Mississippi, Alabama, or Florida. The further out you go the more uncertainty there is. You might enjoy the computer models on this link and think how you would come up with one projection from all this.

Our air is still bad this morning. I guess those winds that were supposed to come in last night didn't happen here.

Praying that you are right, @Ridgerunner !

You might have problems with the one that will called "Vicky."

digitS' said:
The air here has cleared enuf to be out of the 400's but still in Hazardous range. Gee, they have me hoping for Very Unhealthy ...

DS and I went out to feed the rabbits and give water late last night and we both could tell the air was better and I checked and we had gone from dangerous to very unhealthy. It is very unhealthy at the moment and accuweather has us going back to dangerous again later today.

ducks4you said:
Praying that you are right, @Ridgerunner !

I'm fine but thanks for asking. Other than some winds in the low 20 mph range we wouldn't know there was a storm out there. Two days ago we were under the gun. It's amazing how fast these can change.

This is what the Hurricane Center currently says about Vicky, she will just fade away. What's scary about this is that I understand most of what they are saying.