Does it look like you will again "dodge the bullet? " Hope so.

I wonder what it will take to rebuild Lake Charles, LA ...

Yeah, unless something really weird happens I'll see wind in the 25 mph range and maybe an inch of rain. I'm not even putting the wife's new car in protection for this, I'll know for sure tomorrow morning but this qualifies as dodging a bullet.

The people in the southwest Louisiana area were hammered by Laura. Some of the same and some others will be hurt by Delta. This is a strong storm. The immediate need is to survive, which mostly means shelter, food, and water. Without electricity ice becomes really important. The recovery will take time, money, and help, probably pretty similar to all those people burned out in the west.

whoopie. That large storm that came into No CA and southern OR, produced 0.16" of rain for our area. Its been heading north easterly as of yesterday afternoon.

Guess I can't turn off the sprinklers yet. Phooey...

@Rhodie Ranch , we were blessed with about twice that. And, since there is more on the way, more rain will fall this weekend than fell in the previous 90 days!

I want to show everyone what the official air quality reports were showing before the rain cleared most of the smoke from wildfires a couple of weeks ago: 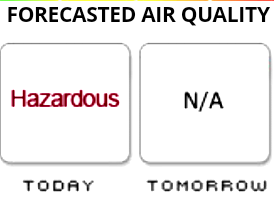 i saw the clouds and was hoping there was plenty of rain to go with them for everyone over there!

I will cover tomatoes and peppers and pull the covers Saturday morning.

we got frosted again last night. might get some rain in a bit, but right now it is sunny. not very warm out there though and a rather biting wind.

The weather changes from a week ago have been somewhat dramatic. After so many terribly dry weeks, RAIN, thankfully. Maybe a little more today drifting down from British Columbia. Then, a windstorm swept through with 50+ mph gusts

A neighbor lost some of his house siding. Some neighborhoods lost electricity.

- coming after so much summer heat, so few clouds and little rain, and so many days with air inversions - heat lingered. The frost lingered until after 9:30 am that day but was light enough that many of the dahlia flowers and the potted tomatoes were pretty much okay.

Another windstorm today and then another bit of rain. After that, the heat of summer will be only a memory, we are told. I will have to decide if I should move a cherry tomato into the greenhouse. After leaving so many unpicked fruit in the big veggie garden, it will seem a rather fussy thing to bother with. If we continue with the big weather changes, let's see ... will that mean snow by Halloween?!