What Did You Learn This Garden Season?

I thought it would be interesting to see what people learned about their gardening practices or new varieties they may have tried. Or anything else garden related.
Here's mine:
I was crazy about Fortex Pole beans until this year, when I planted a few Blue Lake pole just because I didn't have enough Fortex. Surprise! The Blue Lake was later, but way more productive and healthier, stronger vines. And, of course, pole beans are much easier on old backs.

I need to do something with all the store bought dirt in my new boxes. It would not hold water at all, so every day when I watered, I had to use my free hand to mush up the dirt to get it wet.

I'm still learning and don't expect to learn it all.

Except for a few things that usually do okay, the garden is having a good year. The sweet corn was planted where wind interferes too much with watering. That's probably true with the potatoes, also. The lettuce and escarole were planted where the sparrows were delighted to eat it.

The melon plants are okay. I don't remember when I have had a great season.

Why most everything else is doing tremendously, I can't really account for it. The aphids haven't been terrible. I've yet to see a single cabbage worm.

Protection from the wind seems to have benefited the squash but the pumpkins and a few squash at the other end of the garden didn't have that protection and are doing fine, probably better than fine.

There are so many things involved out there. Factors, I think that they are called. Diversity is important to hedge bets but, I knew that . I like knowing that my efforts are gonna pay off !!

Most everything is late/late. I can't really account for it, weatherwise. The eggplants and peppers are big and they will need more time to accomplish much production but they may have it. I'm preparing to be overwhelmed by tomatoes.

I guess that I have learned that we have to anticipate that a season's gardening will be much the same as in the past. Go with that. Then, expect the unexpected. We may like it.

I learned quite a lot this year. I learned to prune tomatoes for air and light, that fertilizer needs to be a lot more regular than I thought, and that the shade of green on a tomato will tell you if it will ripen off the vine, or if it won't.

The garden itself did pretty poorly this year, but the wealth of information I took away is going to make for such an exciting year 2021 I just can't wait to start the next season.

I learned there are no garden fairies. If I opt out of my garden chores in favor of a ride the garden will still be weedy and need watering when I get back. This was disappointing.
P

I learned I need to automate more of the everyday chores. As much as I find it relaxing to stand out there and water or weed, when work and chores and weather get in the way, I can't actually force myself to go out and do things. Having it set up so things get taken care of automatically no matter what my motivation is will at least keep my garden alive until I have enough free time to go back to it.

I really need to double down on weed control and drip lines, etc.

when you need a nap, take it.

if the bees and ants like the melon it's probably ready.

melon seeds that are empty make a distinct sound when you drop them on a thin plastic tray. it would be quicker to go outside and let the breeze sort them but i've not had a chance to do that.

melon seeds taste like pumpkin seeds, and you can eat them like sunflower seeds, but the husk is harder and there's less in them to eat. starvation or OCD food for those trying to quit smoking or chewing? perhaps... i didn't roast them. it was a very faint flavor and not much of anything from them, but like i said, starvation food...

i've always known this, but Mom is awesome... she's really helped out this week a lot more than i really wanted her to do but the big project is almost done as soon as i can get back to it and we've managed to maintain our sense of humor and are getting along ok, even when i got cranky the other day. see above about the nap...

thistlebloom said:
I learned there are no garden fairies. If I opt out of my garden chores in favor of a ride the garden will still be weedy and need watering when I get back. This was disappointing.
Click to expand...

AMKuska said:
But the ride was really fun, right? ;-)
Click to expand...

. I have been riding the hide off Syringa and we are both loving it. It's important to keep your priorities straight in life.

digitS' said:
I guess that I have learned that we have to anticipate that a season's gardening will be much the same as in the past. Go with that. Then, expect the unexpected. We may like it.
Click to expand...

Well, I plan as if everything will go normally... with the expectation that it won't. Every year brings both successes & failures, so I tend to hedge my bets & over-plant. The worst that could happen is that if everything does well, I'll be suffocating under a pile of produce - and giving lots away.

I am always experimenting with something, be it new varieties, better spacing or culture of something I've grown before, or learning new ways to preserve the harvest. Probably the best technique I've learned this year was to tie up anything that could lodge. Besides making the plants more accessible, it minimized spoilage, vastly improved the yield for peppers & tomatoes, and reduced rodent damage on soybeans. I'm still trying to figure out a way to support bush beans to reduce rodent damage, but that might be a lost cause. Fortunately most of my beans are pole varieties... but for all bush legumes (including my soybeans) maybe I just need a couple cats?

I learned that squash bugs like to hide in dead leaves. They got into my Tromboncino twice this year, the second attack is still ongoing. The dead squash leaves remained attached & hanging; numerous squash bugs hid in those dead leaves during the day. I cut off & squashed all of the dead leaves; and with nowhere left to hide, most of the bugs have now been dispatched by soap spray.

After several years of experimentation, I found the okra spacing that works best for me. Clusters of 3 plants, clusters spaced 18" apart, in two rows 24" apart. This spacing causes the plants to put all of their energy into a single stalk, an early & consistent yield, and an unbroken canopy with just room to harvest. It also means that I can get all the okra I can handle from just one 32-cell tray of transplants. 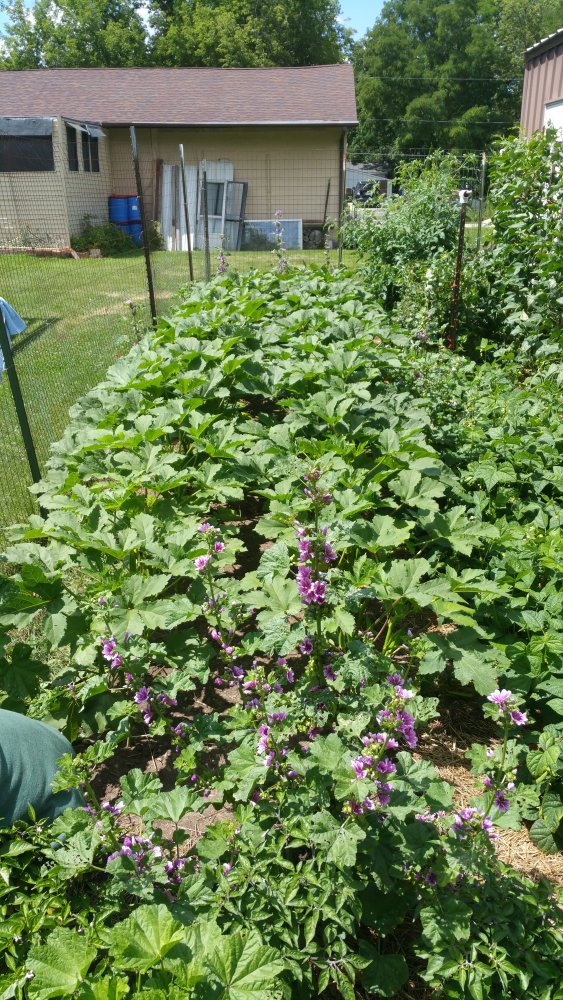 The "German Butterbean" limas are spaced 24" apart, which is my default spacing for limas; but the yield & leaf cover shows room for improvement. In the future, I'll experiment with closer spacing.

Dehydrated okra makes an interesting, very crunchy snack. It is a good way to use the culls that are too curved or too old for pickling. Still a lot of experimentation possible with dehydrated okra; perhaps over-sized pods could be dried, ground, and added to soups... its good to find a use for what would otherwise be discarded.

But probably the biggest lesson learned this year was humility. As a gardener, I expect & anticipate that the garden will do a little better each year... but ultimately, success or failure is largely due to conditions beyond our control. Weather, weeds, pests & diseases all hold trump cards, and can be a challenge to overcome. This year, a severe infestation of flea beetles completely destroyed my water spinach; the chard (directly adjacent) was untouched. Last year, leaf miners destroyed the chard, and the water spinach was untouched - every year is different. I've always taken success with runner beans for granted; but this year two varieties of runner bean - in two widely separated locations - just refused to grow for most of the summer. They are only now climbing & blooming, and I can only speculate as to the cause. I've lost my entire garlic collection 3 times (for several reasons) to the point where I am almost ready to give up growing it. And this year, the weeds in my rural garden were a nearly insurmountable obstacle, that took almost 2 months & countless hours for DW & I to eliminate.

As frustrating as gardening can be at times, all one can do is focus on the successes, learn what can be done better, and leave the rest to a higher power. I count my blessings that this year's garden, for all its failures, still provides enough bounty for me to eat well & share with family & friends. It could easily be worse, those in the Northern part of Wisconsin are expecting frost tonight.

flowerbug said:
when you need a nap, take it.
Click to expand...