Baymule mentioning cougars made me think about this. Supposedly we haven’t had a confirmed cougar siting in the state since the 1960s. However, there are many unconfirmed sitings. Tennessee has had several over the past few years that were confirmed.

I’m just wondering if anyone has any stories like these?

with more people putting trail cams up you see a lot more wildlife videos than before.

one bird that i've only seen once in all the years i've been here is a green heron. supposedly not too rare, but i'd not seen one before about five years ago and then when i did see one and heard it i was wondering what it could possibly be and it took me some time to figure it out.

My brother-in-law in northwest Arkansas caught a bear going through his trash can on a security camera. He mentioned it to a ranger at a nearby state park. At first the ranger said they did not have bears but bil showed him the video. The ranger then said they did not want to admit there were bears up there because people would hunt and shoot them even if they were protected. The ranger told him what they had named that particular bear. I can't remember the name. They did not consider them to be a danger to humans and there were no attacks. An attack would have made the news.

In Arkansas I lived right next to Stevenson Mountain, the tallest point in the county, like right across the road. That whole area was pretty wild. I never saw a bear or mountain lion but there were rumors. As wild as it was I'd be surprised if a bear didn't occasionally visit. A state park about 20 miles to the south did have bear and mountain lions, there were posted warnings. That's not far for a mountain lion to roam but the neighboring farmers did not lose horses or cattle to them. The deer population was out of control there too, plenty of food for them and the coyotes.

I had three packs of coyotes there, you could hear them at night. One was to the northeast and another to the northwest, both on Stevenson Mountain. The third was to the southeast on a ridge. A neighbor's wife liked to stand on her back porch and shoot the wild boar. She popped a coyote one time.

I had the perfect location up there. About halfway up on a one mile dead end road in a valley with mountains and ridges all around. There were 6 houses on that private road, all good people. Really private but less than ten minutes from a grocery store, hardware store, and post office. We were on county water.

I don't have a story like @Ridgerunner about the authority saying an animal is not there when it is. Not much of a hiker these days so have no recent experience in the mountains .

Somewhere on TEG, there is a picture of a coyote in my big veggie garden. They are fairly regular visitors by evidence that they leave behind. I'm all in favor of them limiting the Mountain Cottontail Rabbits that are tolerated by the human neighbors. I only noticed Hoary Marmot activity on the most recent visits but they can be a problem, Ground Squirrels, too!

I'm frustrated here at home by the non-native bird population. Most particularly are the large number of House Sparrows that eat the lettuce. Not at all happy with the Leopard Slugs that eat not only the lettuce but most any garden plant! I'm willing to tolerate the Valley Quail because they are infrequent visitors and have so much trouble with the neighborhood cats. I wish that there were more native birds here at home but it must be 90% sparrows and starlings.

Valley Quail: it used to be that I would never see them in Idaho and almost immediately see quail when crossing into Washington. I think that indicates the behavior of the non-native human populations. The quail have been on both sides of the line in recent years.

When I had a garden in Dad's backyard and he wasn't there to turn my irrigation water off for me, I used to make regular visits to walk in a park for an hour or so. The last time I was there a sign had been posted saying that a cougar had been sighted in the park. I looked at my cane, looked back at the sign ... and went back to the parking lot.

Steve
edit: taken a dozen years ago from the neighbor's garden and beyond his raspberries. 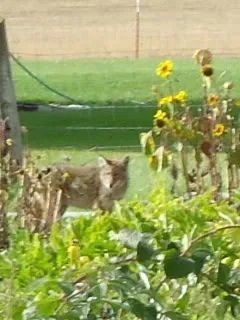 i don't think the coyotes around here do much at all for controlling the deer population. if anything they might eat an elderly sick one or a very young one, but that is about it. i hear them out and about some evenings.

When I first moved into my home, it was late December. The ground was covered with snow, so I was unable to walk through the wooded portion of the property. When the ground dried out enough in Spring, I took a walk back there - and found the carcass of a red fox. In this mostly-developed suburb, coyotes are reported fairly often; but not foxes. It appeared to have been shot, probably by the previous occupants. Personally, I'd welcome anything that would keep the rabbit & rodent population down...

... except cougars, which have been sighted 20 miles away, and appear to be making a resurgence in the state. One of my former co-workers sighted a pair crossing his rural driveway.

The wildlife population has changed a great deal since my youth. Pheasants used to be a frequent sight, my father would hunt them just outside city limits - now they are rarely seen. What is often seen is wild turkeys, which were almost non-existent in this area 50 years ago. Efforts by the DNR to re-introduce them have been wildly successful, and they now occupy much of what was previously pheasant habitat. A few years ago, a flock of them was feeding in my garden while I was there... to say that we were mutually shocked to discover each other would be an understatement. Those flying bowling balls make a lot of noise when they take to flight.

Sandhill cranes are another DNR success story; they are now everywhere. They frequently fly over my home, and are often seen in newly-tilled farm fields or newly-planted corn. I once arrived at the rural garden just in time to catch a pair of them walking out - having just uprooted my entire corn planting. And as I found out, they are big birds, and don't scare easily. We spent a few minutes arguing with each other before they casually strutted away.

@digitS' my dad has a similar story regarding a cougar. He was staying with my uncle in Colorado for a few days and decided to go for a walk. He only got about 20ft past the fence line and onto the state owned property behind my uncles when he noticed a pool of blood in the snow. When he looked up there was a fresh deer carcass hanging 40ft high in a tree. He hightailed back to the porch.

@Artichoke Lover , I didn't expect a cougar on the side of the river where that park is located. He must have been comfortable swimming from an area with several forested mountains, few houses and thousands of acres of farmland beyond.

Does anyone know how roosters and rabbits react to each other?

The location of what must have been a prime rabbit homestead is near my garden. It is about a 1000 sq ft of juniper bushes where I would often see rabbits retreat to from the gardens. The new neighbors have chickens that are out every day.

It seems possible that there haven't been much coyote 2021 activity but something happened to the rabbit comings & goings as the season progressed. I threw one rock at a rabbit early and didn't see any more later - very surprising! BTW, that rock throwing defense is almost a waste of effort on rabbits. They don't seem to know where the rock came from - even if they are hit.

The new neighbors also have two small dogs but I haven't seen them running loose one time. Is it possible that the rooster would not tolerate rabbits? Their coop is only about 15 feet from the junipers.

To show how tame some of these neighborhood rodents are, I took this picture with my old flip cellphone. 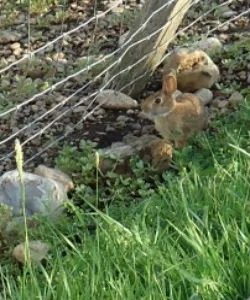 flowerbug said:
i don't think the coyotes around here do much at all for controlling the deer population. if anything they might eat an elderly sick one or a very young one, but that is about it. i hear them out and about some evenings.
Click to expand...

So what are they eating? Rabbits?

ninnymary said:
So what are they eating? Rabbits?

Coyote have a pretty healthy population here. They are scavengers too. Will eat any road kill. Yes rabbits, mice, any small critter they can catch. Occasionally can be a pest on farms where they will try for lambs, chickens etc.
You must log in or register to reply here.
Share:
Facebook Twitter Reddit Pinterest Tumblr WhatsApp Email Share Link