Xerocles head in the clouds and feet firmly in the mud.

We start by selecting the plot of ground. My avatar that I put up today is exactly that. I'll also put it here because the avatar is so tiny. 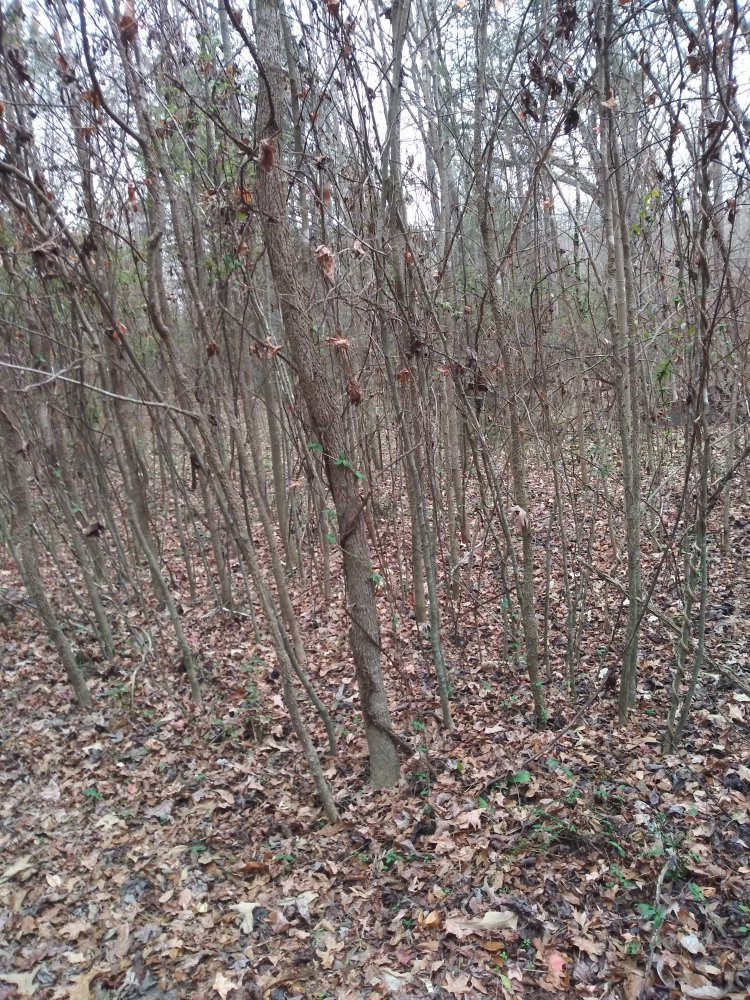 Doesn't look like much of a "garden" does it?
I'm in the piedmont of SC, living on the side of a hill. I gain (or lose) about 30 ft of elevation from side to side on my 3 acres. This is the closest thing to flat and level that I have. My property is basically a bunch of erosion gullies with aspirations of becoming the Grand Canyon of the East. But it's what I've got, and it's MINE.
The plot is approximately 120' X 50'. Hard sticky red clay.
Once the "where" is established, then I began on the "how". My first thought was raised beds. But then I thought. That's "kind of" cheating. No offense to anyone who uses them, but that's the "easy" way, and not doing anything to actually "improve" the land. My goal is not so much to grow stuff, but to grow stuff AND improve my little piece of earth.
I learned long ago that "traditional" gardening doesn't work for me. Plow the ground, make rows, plant seeds, try to keep water balanced, throw tons of "commercial" fertilizer at it, and become frustrated and defeated when the weeds and bugs take over.
So, I researched. Container gardens, raised beds, back to Eden, etc. Then I stumbled on Ruth Stout. Lazy man's garden. Yep. That's me alright. So....that's where I'm going to begin the "how". The theory sounds really good. Will it work? We'll see. Certainly can't be any worse than what I've done in the past.
Last edited: Jan 31, 2020

Welcome Xerocles! That patch looks like work to me. Should keep you out of trouble for quite awhile.

What type of trees are those?

A traditional in-the-ground garden does not need a lot of commercial fertilizer thrown at it. Do you have animals? How much manure (natural fertilizer) do you have to play with? Have you started your compost pile yet? Looks like you have a lot of leaves to get you started though you might be better off letting them rot where they are or turn them under, at least in your garden plot. Get stuff for your compost pile somewhere else. A natural mulch not only keeps weeds down and conserves moisture but it rots to enrich your ground. The different natural mulches (dried leaves, hay, straw, grass clippings, wood chips, Spanish moss, whatever) have their pros and cons, but I consider a good mulch as tremendously beneficial.

You said you have a red clay. In one way that is good. Clay is typically really rich in nutrients, totally opposite to the sand that @baymule started with. But it's impervious. It holds water and can drown your plants. Also, when it dries it becomes rock hard if it has been disturbed when wet. It will even get hard when it dries even if you don't disturb it. Pure clay can be a pain to work with. It's not going to happen overnight, it may take years, but the remedy is to add in a lot of compost (or rotted natural materials, same thing). That improves drainage and tilth of the soil. Tilth is workability. In your case that means it is more likely to crumble when wet instead of form a sticky glob that tries to take your boots off.

A question to you. What are you doing about creating compost? You will need a lot.

A suggestion. Get with your county extension office and see what it takes to get a soils analysis. In Arkansas it was free. In Louisiana it costs me $16 bucks a pop. I have no idea how it works in South Carolina. I don't know what results you will get either, they varied. I thought I got better details from that free Arkansas test so each state is different. Typically you get a breakdown of what essential nutrients you have in your soil, the pH (very important), and maybe a bit more info. They typically ask what you plan to grow and make suggestions as to what you need for those specific crops. These suggestions are usually around commercial products but don't get discouraged. After you get the results contact your county agent and tel them you are looking for more natural ways to do that. Some agents are better than others but it should not be a strange request.

Well, it's raining and cold (by MY standards. 39f. Sorry bout that to you folks up to your bellybutton in snow). So, I might as well put the next chapter in here now.
With the plot chosen, the prep work begins. No matter WHAT style I chose, first those saplings had to go. So, chainsaw time. Oops, quick flashback time. I moved here last Feb. Knew I wanted to try Ruth Stout, and knew I wanted my hay down by spring of last year so it could begin it's magic before I planted this year. Fast forward to Dec 2019. Standing there with hands on hips, realizing I had already procrastinated too long (home repairs, chicken runs, rabbit sheds and such) I knew I HAD to get started. Actually too late already to realize any benefits this year, but I wanted to get SOMETHING in the ground this spring. So the chainsaw came out. And died halfway through. Bought a battery powered chainsaw (first time...I was leery of it, expected to have to return it as a piece of crap) but I LOVE it! All the saplings are cleared. I stopped counting at about 300. How did our forefathers DO this with axes and crosscuts!
I stumbled across a wonderful neighbor with an offer of 10 round bales of hay at the bargain price of FREE! I had the land cleared almost two weeks before I could begin putting the hay down, because it rained every third day for two weeks, and couldn't get the tractor in there to unroll it. Now, I finally have one layer down. The rains came again, and I am waiting so I can build it up to about 12". (Gotta smother out those saplings).
When I mentioned Ruth Stout on the other site someone (might even have been you @Beekissed ? I don't remember) mentioned that the heavy mulch would invite slugs and mice and other "critters" and that I would need Runner Ducks to police the garden. WHAT!?! Yet MORE things I needed! I had never heard of Runner Ducks before, and envisioned ducks who would go get coffee and donuts and such. So, the feed store has promised they would order me some sexed runner ducks in March. So, now I have to build a sleeping house for the ducks. And put in an old bathtub for them to play in, and drainage for the tub so I don't begin a NEW erosion gully. And, deer in the area, so gotta put up deer netting and battery powered motion detector lights to scare off the deer. IT JUST NEVER ENDS!
Actually, it ends here...for now. Getting burned out with all this typing, so I'll pick up again later.

thistlebloom said:
Welcome Xerocles! That patch looks like work to me. Should keep you out of trouble for quite awhile.

What type of trees are those?
Click to expand...

remember you're talking to a city boy returned to the country. Those trees are the wooden kind.

Ridgerunner said:
A question to you. What are you doing about creating compost? You will need a lot.
Click to expand...

Lots of information about composting, mulching, rotting, etc. Yep. That's what the 12" of hay is for. And the planned additional 8" every year hereafter. "Traditional" compost pile? The yard leaves go into the chicken run, and eventually to the garden, but 6 chickens can only produce so much compost. PLENTY of leaves on the property (mostly mature hardwoods here) but the vines and surface roots make them next to impossible to collect. Kitchen scraps? With a household of one, kitchen scraps are negligible. Don't even have a "last years garden" waste to add. I do have four rabbits, and while I do hope to raise about 100+ per year to eat, their primary purpose is to provide cold manure for the garden. Looks like I'm down to grass clippings and a handfull of leaves.
So, although I have a compost pile, I don't see it as supplying a substantial volume of actual compost for the garden. I've had it going since last Feb and I might have a wheelbarrow full. My six earthworms would look at that and say "that was a nice appetizer. Now FEED us."

Xerocles said:
When I mentioned Ruth Stout on the other site someone (might even have been you @Beekissed ? I don't remember) mentioned that the heavy mulch would invite slugs and mice and other "critters" and that I would need Runner Ducks to police the garden.
Click to expand...

Nah, that was someone else. I merely stated that Runner Ducks could help with pests that hide in the hay. I already had slugs in the garden before I used hay, from using seed potatoes from my brother's garden, who trucked in tons of mushroom mulch that was laden with slug eggs.

I haven't seen any mice or voles in my garden, but then I have a master hunter living yards from the garden, so I'm not likely to see anything like that.

Xerocles said:
. And, deer in the area, so gotta put up deer netting and battery powered motion detector lights to scare off the deer. IT JUST NEVER ENDS!
Actually, it ends here...for now. Getting burned out with all this typing, so I'll pick up again later.
Click to expand...

That might not deter your deer, especially if you have a heavy population. A hot wire about knee high works well, though, and you don't have to "bait" the line with peanut butter at all....deer are naturally curious and will explore it with their nose and get a zap. We used the same when we lived off grid, with a car battery to power up the fence, and never had a deer in the garden. Now I have the dogs, so no need for it.

We’ll I see you accepted my invitation to come on over to TEG and start a garden journal. You will be glad you did. I like to go back and read my garden threads from year to year. It makes me feel better when I am in midst of failure, to see how far I’ve come. I start a new garden thread every year.

Post lots of pictures along the way, you will be able to track your progress. One day you’ll be reading this thread in amazement at what you started with and what you have on that day onto the future.

Since you have such a hard start, listen to the voice of experience and go easy on the Baker Creek order. LOL LOL

Glad to have you here!

baymule said:
Since you have such a hard start, listen to the voice of experience and go easy on the Baker Creek order. LOL LOL

You mean I should re-think that $300 order I planned?