Wow ! Can you believe we are beginning our seventh (7th) season on our bean group here on theeasygarden.com. For those who haven't gotten into the bean world yet. There truely is a thrill of discovery waiting for the uninitiated. Beans seem to have endless variations of color, shape, and seed coat design. Besides being a useful and easy to grow important major food crop in many parts of the world.

We are a group in a network of gardener bean growers doing what we can and doing our little part keeping heirloom bean varieties from vanishing forever. Many of the varieties we grow are also grown by many others across the country and probably around the world. These varieties are likely kept by collectors, seed libraries, heritage seed companies, and seed exchanges. Plus our efforts add to all of that as well. The more people that grow heirloom varieties insures survival of this wonderful treasure from the past.

We are not just purists when it comes to beans. So some of us do put in some effort and enjoy working with natures new creations in bean outcrosses.

For those who don't know how this network operates. I refer newcomers to my website which has been the basis of our network. The website is https://www.abeancollectorswindow.com/. Click on the yellow colored Network link under the header photo of all those beautiful colored beans. If you have any questions my email address is upadam@comcast.net, and that address is also at the bottom of each page in the footer.

for those who don't know it the previous network bean threads are worth reading too (we have a rainy week forecast for us here).

Welcome back, Russ. Hope you enjoyed your downtime. Once again I'll be growing segregations I got from the Will Bonsall beans from you I grew in 2016. Since my move I'm pretty short on space but I'm making space available for some. Hopefully with this climate I will be able to get in a couple of growing seasons. We'll see how these beans handle the hot summers down here.

I have eight 4' x 8' raised beds, a new method of growing for me. And I figure it will take me two or three years to get the soil in them right, I need to add a lot more compost and get the pH adjusted. I won't put a lot of faith in how vigorous these grow or how productive they are until I get more comfortable with the soils. Since people like photos this is what I'm working with for all my vegetables, photo taken today. Now I'll do a sort of bean show of what I'm growing this year.

I'll start with Banzala, a black bush bean that came from the Will Bonsall #39. All the bean flowers are beautifully colored but I really like this one. I grew Banzala once before and it produced true so this will be the second try. 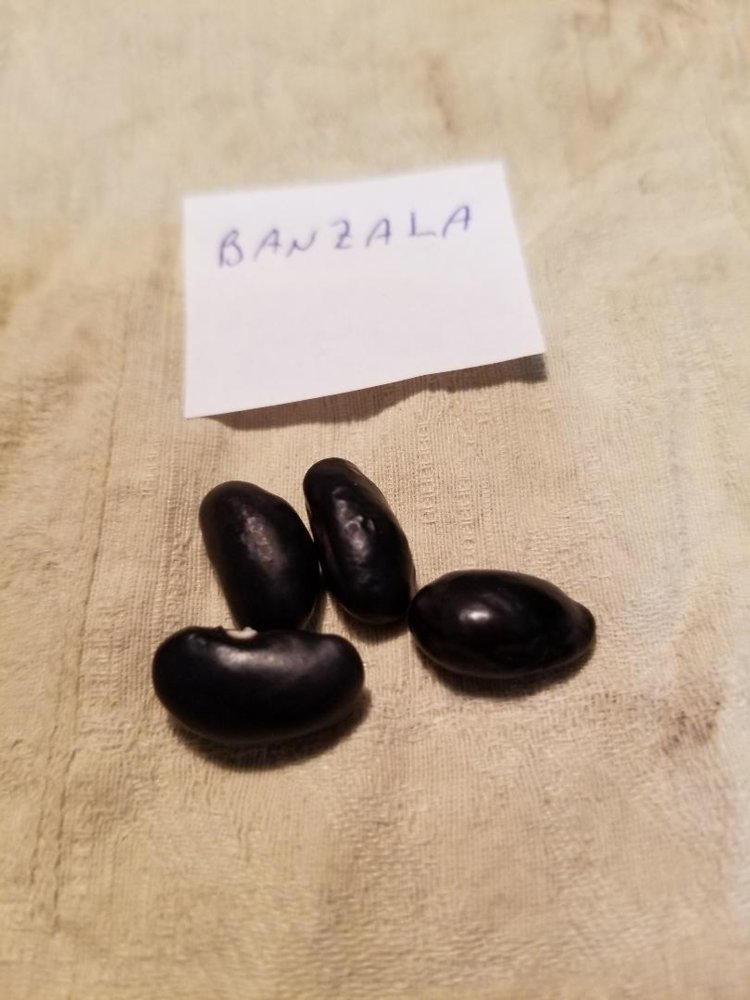 These two are also from the WB #39. I've also grown these once before and they produced true, but the Karachaganak produced two different shapes, more rounded and more oval. These are the rounded ones. The blossom looks white but there is some pink in the base of it, same as last year. Both are pole beans. Jas, also from the WB #39 is a white bean when it is fresh and the markings are a purple. These were grown in 2017, interesting how the color has changed as they age. Again the bloom is that fuschia pink I like so much. AValley View is also from the WB #39's. This one is a bush bean, sort of a sister to that Up the Valley that guy grew last year an had such success with. And again, the fresh dried bean is pretty white. The flower is interesting. Some are that pink/white but others are a creamy yellow, as you can see on the same plant. Next is Miss T. This is a pole from the Will Bonsall #32 and again will be the second time I grow it. The original plant was hugely productive, when I grew it the second time it was still productive but not ridiculously so like that first plant. Miss T has not stabilized, I got several segregations the last time I grew it. I'm trying to select for one that pretty much looks like the original Miss T, it may take a few more cycles. I'll hold onto the other segregations and maybe eventually try to stabilize some of them, but that's down the road. The blossom on Miss T is a brilliant white. It's quite showy. Tallulah's Treasure is a segregation from Raspberry Ripple which came from the Will Bonsall #27. It's a pole and the plant was very prolific. When I grew it in 2017 the pods were edible, it could be a snap bean. The reason I names it after my granddaughter was the pretty pink blossom. Hope this one stabilizes. Next is Tartan, a pole out of the will Bonsall #38's. I think this dried bean is really pretty, more attractive now that it has dried. The first time I grew it, it was a pole but not real vigorous. This year it looks like one is going to be a bush, so not stabilized. Darn. The flower is sort of a yellow and white. The last one I'm growing is Rising Fawn. This is also is a segregation of Raspberry Ripple which was from Will Bonsall #27. It is a pole and looks a lot like the original Raspberry Ripple seed but the difference is that the flower was white, not pink. I recently planted this one in a cool weather bed I cleaned out but don't have any flowers yet. That's it for what I'm growing this year so far. I have planted one bed solid with Blue Jay, your bush snap bean. I ate this last night. it will be a while before I actually get a mess. I saved all these seeds in 1217. So far I've planted a total of 98 beans. Of these 98 germinated. I thought that was worth noting. Now a few of those took about a week longer to germinate than the vast majority of the others. I marked a couple of those and they look stunted. I may pull those in a couple of days thinking they may look diseased. I don't expect them to be productive anyway and don't need them, why take a chance. I just talked myself into pulling them now and putting them in the garbage.

Thanks for the welcome back @flowerbug and @Ridgerunner. It was a nice winter in Kissimmee, Florida. Went to the Strawberry Festival in Plant City, Fla. in early March. WIllie Nelson was there so saw his concert. You got some nice colors @Ridgerunner out of those Will Bonsall outcrosses. I'm going to grow out a bunch of them this year to boost up the seed quantities and see how stable some might or might not be. Will put away the new seed in the freezer come this fall. Getting a few more new growers to join this network this year. I'll report the total number of growers about the end of June. Here in this part of the country just gotta wait until the weather warms up enough to plant beans.

Welcome back everyone! Despite the recent snow storms here in MN, I'm pushing forward with garden plans and starting lots of seeds in the greenhouse.

Russ, are there any Robert Lobitz bush beans that need to be renewed this year? They seem to do well in my garden and climate. I also would be interested in trying an early season Lima bean if anyone has a recommendation? I have tried Christmas lima beans before and got an ok amount harvested. Time to start going through old posts and getting a bean grow out list together.

I pulled luxuriant weeds and fescue yesterday by the wagon loads and took to the sheep. Got two wiggly granddaughters in my lap. LOL I’ll be back after the weekend so I can go look at the bean pages!

The Purple Diamond could be grown out this year. Also I've had trouble increasing Alice Sunshine and Eden Prairie. Another bean it's not a Lobitz one but you could grow Buckskin Girl. I think you grew 4 varieties last year. You could do these four I've mentioned and anymore if you want to.
You must log in or register to reply here.
Share:
Facebook Twitter Reddit Pinterest Tumblr WhatsApp Email Share Link