60% of coffee species threatened with extinction

We can always go to a poor substitute, during WW2 in Holland people made "Ersatz coffee".

google translate:
As early as the nineteenth century, poor people did not drink real bean coffee, but counterfeit coffee. Usually, this 'coffee' was made from local ingredients such as chicory, grains, acorns, and even roots of dandelions. Well roasted and mixed well you got a drink that tasted vaguely to coffee. Van Gogh's potato-eaters drank cichorum coffee with their food. On the famous painting the brown brew is just poured.

In the last war, various Ersatz products were also sold in the Netherlands, such as acorn coffee and weed tea, sugar-made artificial honey, bouillon cubes without meat extract, fake tabacco, liqueur without alcohol, and jam with many colors and flavors but without fruit. It often tasted like nothing, and there was no exciting caffeine in the counterfeit coffee. But consumers were so attached to their daily cup that they took the taste of fake for granted. There was not much else, because real coffee was no longer there.

Pulsegleaner said:
Not all that much actually. If I remember from what I have read, coffee does pretty well as a houseplant, and can flower and fruit at sizes containable by a large indoor pot. You can get personal roasters (or simply roast them in an oven).

HOW MANY you'd need for regular consumption I don't know. Some of these say they will make hundreds of berries when mature (the berry's flesh is also good to eat, tastes like cranberries and is high in antioxidants.)

Houseplants huh??? I've got a couple of friends who could give me some tips on converting a bedroom into a 'grow room' 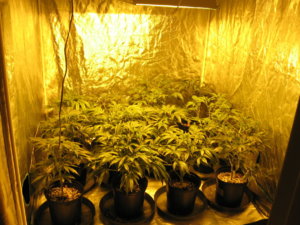 The question we all must ask ourselves: What are we going to do about it?

Steve
also, some history on coffee species used and help in understand the difference between Arabica (Coffea arabica) and Robusta (Coffea canephora)
Click to expand...

roasted chickory and dandelion roots or the old stand by postum works in a pinch for a close enough flavor and if you require caffiene tea leaves provide plenty.

i do like coffee in small amounts these days, but i also like variety so i'm trying not to be hooked on it. i currently use about 1/4-1/3 teaspoon of instant coffee in 10oz of water and am wired by that bad enough as it is.

canesisters said:
Houseplants huh??? I've got a couple of friends who could give me some tips on converting a bedroom into a 'grow room'
View attachment 30187

weed is now legal for personal use here. i won't be smoking it ever again but i can't make any promises about magic cookies/brownies. can only grow 12 plants. i used to grow them as a teen but that was many years ago and the resulting quality was horrible, but they were very pretty plants. i'm sure the quality has changed quite a bit from what i'm hearing. i doubt i'll be growing any anyways, but it brings back some memories from that era for me. i never had a grow room for them, just a plant in a pot in the window.

Oh, no. Panic. Murder in the streets. What will I do about it? I won't even notice it's gone except for all the addicts jonesing on the corner, begging for anything to take away the jitters.

Pulsegleaner said:
Doesn't Yaupon make you vomit if you drink significant quantities of it?
Click to expand...

The natives used to use Yaupon in their ceremonies to purge themselves. When we took the Boy Scouts camping we'd teach them what Yaupon looked like and told them to not handle it or use the wood in the campfires. Of course some would not listen. It usually wasn't that bad.

You can use many different things to make tea. Some have "medicinal" effects, some are just for flavor. I guess it depends on why you drink tea. Yeah, volume probably has a lot to do with the effects. Or maybe concentration.

The traditional New Orleans coffee is a mixture if chicory and coffee, very strong. Some like it black. Cafe au lait, a favorite non-alcohol drink, is about 50% of this chickory coffee and 50% hot milk. Many people add a lot of sugar, some don't. At Cafe du Monde in the French Quarter cafe au lait and beignets are the go-to items. Decades ago when I as single my roommate and I would bike about 5 miles to Cafe du Monde in the French Quarter on a Sunday morning, eat beignets and drink cafe au lait, read the Sunday paper, and laugh at the tourists with their hangovers.

I heard the same story on NPR yesterday. I was gonna look it up, but Thanks for the link!
B

NOT to worry... wonders of chemistry will eventually prevail !!!

I once walked into a Starbucks with others, I needed to use the bathroom. Since I was with customers, no problems. When I came back I looked at offered flavors. Hard as I looked I could not find a flavor called "cup of coffee".
You must log in or register to reply here.
Share:
Facebook Twitter Reddit Pinterest Tumblr WhatsApp Email Link