Nobody cares what corn varieties their neighbor grows unless
1). They are growing a specialty crop-seed, popcorn, etc. They have been known to pay area farmers to not plant certain crops near their fields.
2). IF they are planting a crop that requires a herbicide with a tendency to volitize.
3). Usually the outside 12-24 rows are sold as field corn but after that the purity level is extremely high.

4) The extent of your corn 'field' is no more than 24 rows, so it would all be contaminated.
D

meadow said:
4) The extent of your corn 'field' is no more than 24 rows, so it would all be contaminated.
Click to expand...

I don't understand that comment...please explain

Oh, I just mean someone that is not growing a large field of corn. His example showed a sacrificial buffer of 12-24 rows that 'protect' the inner rows by catching the incoming pollen from the neighbor's fields.

DD finally did her Botanical Lego Succulent kit. The burros tail is my favorite. 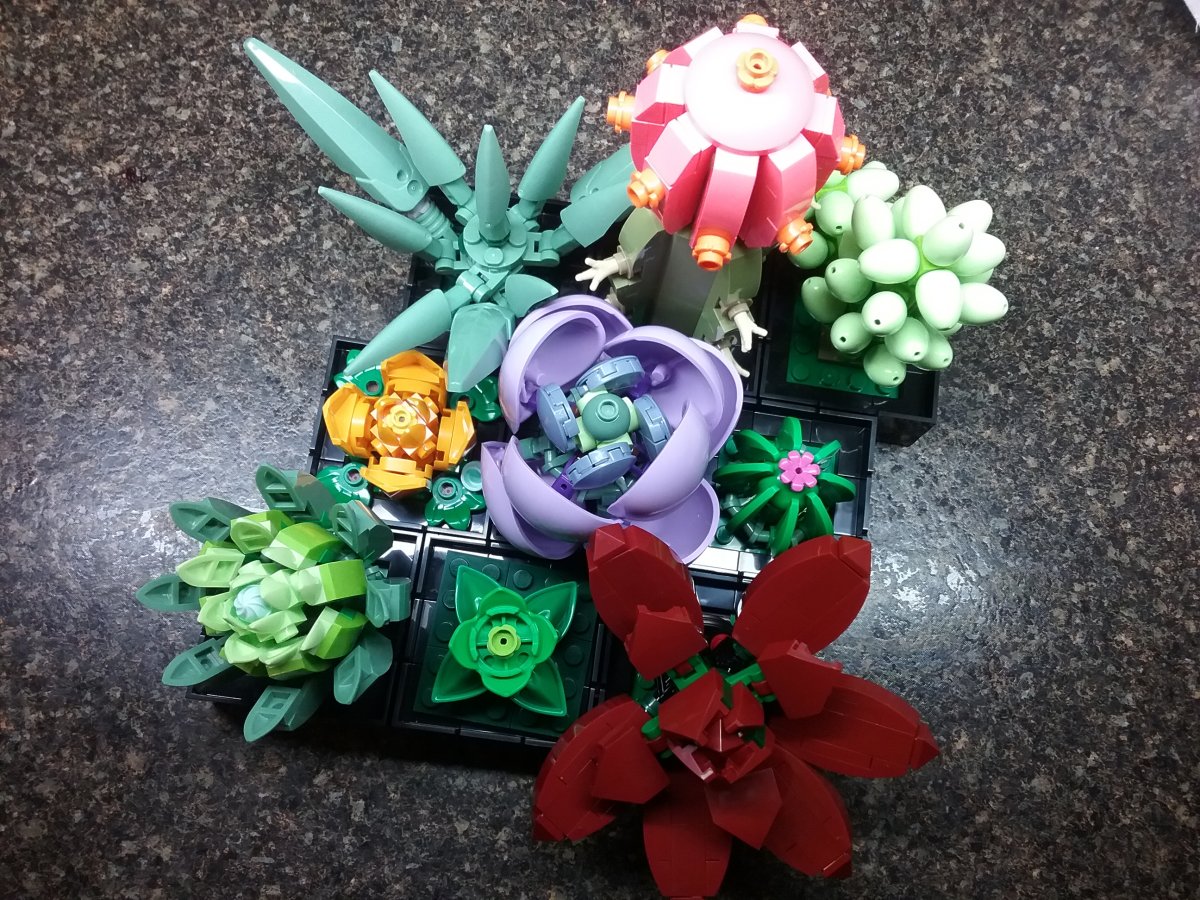 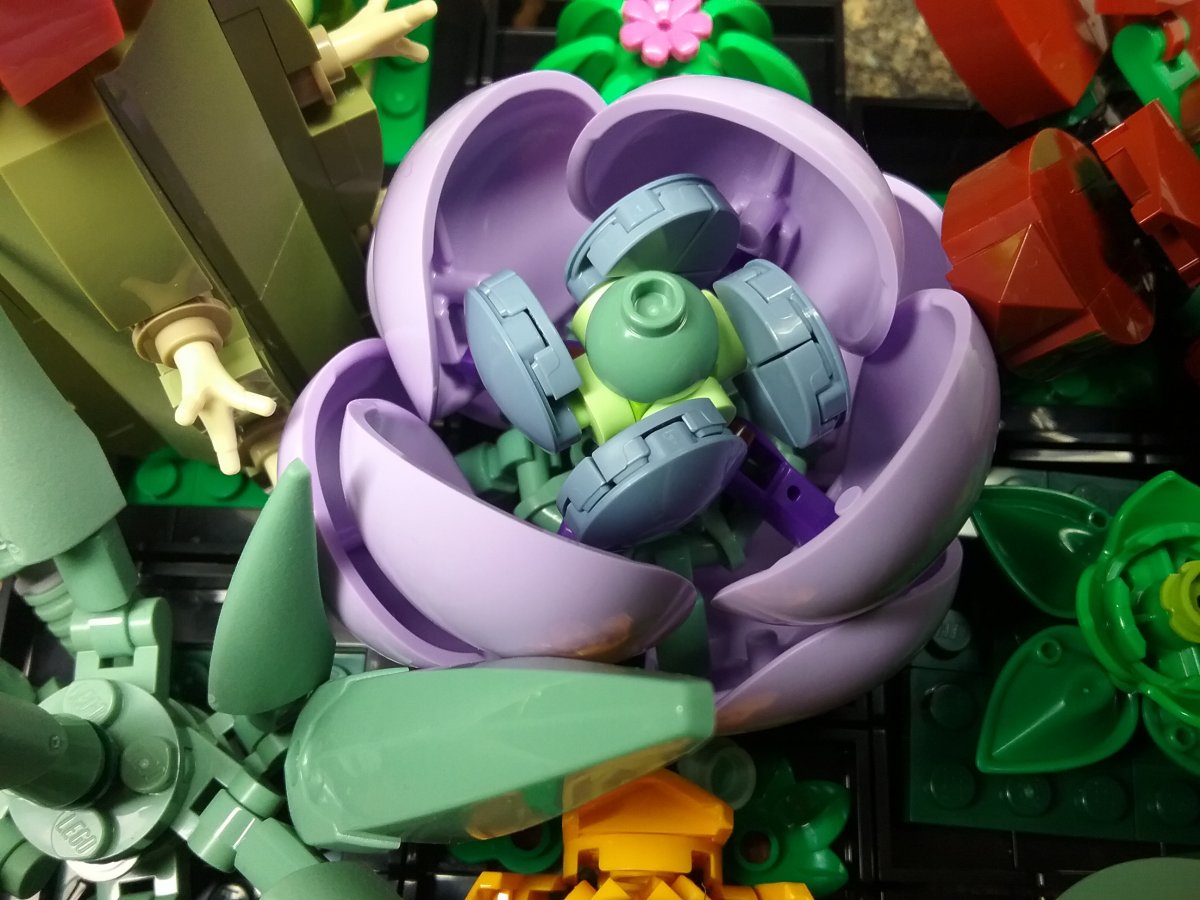 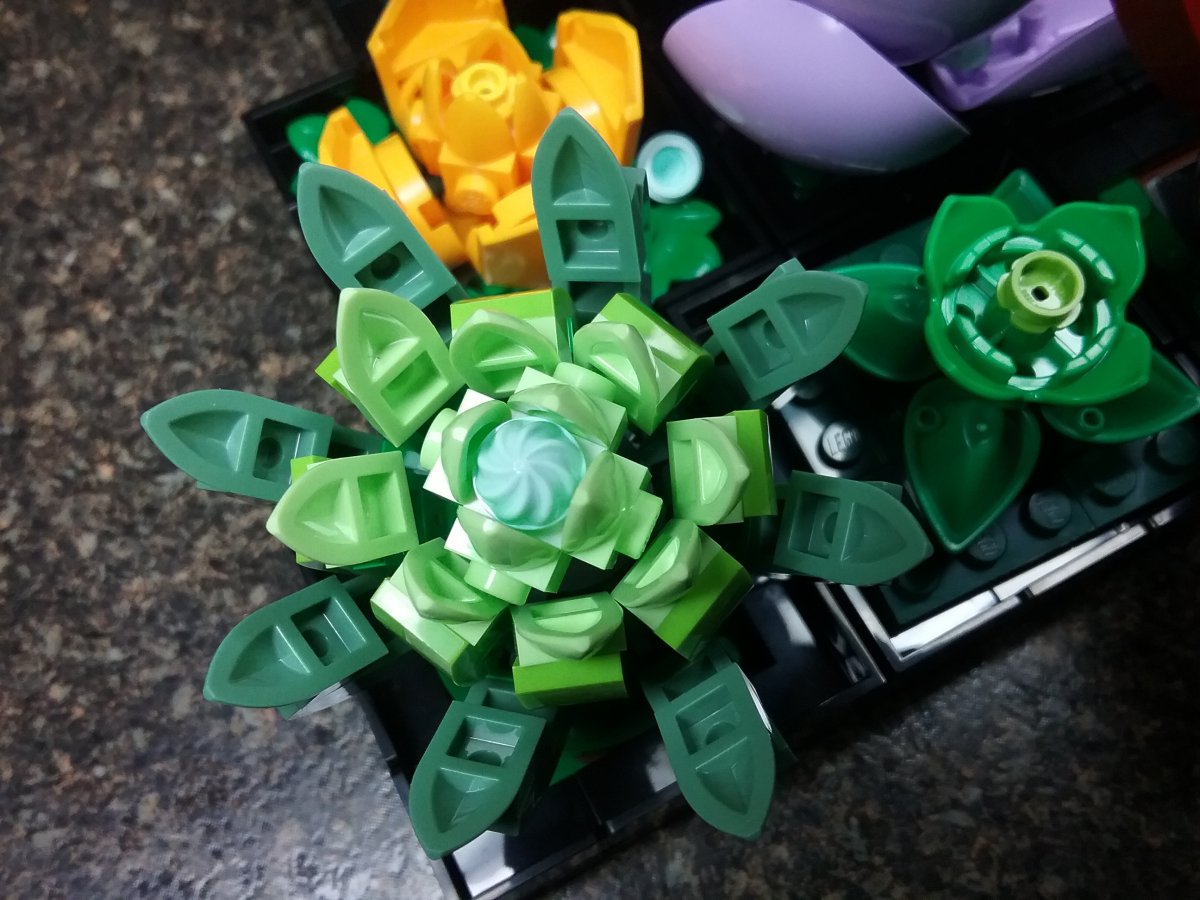 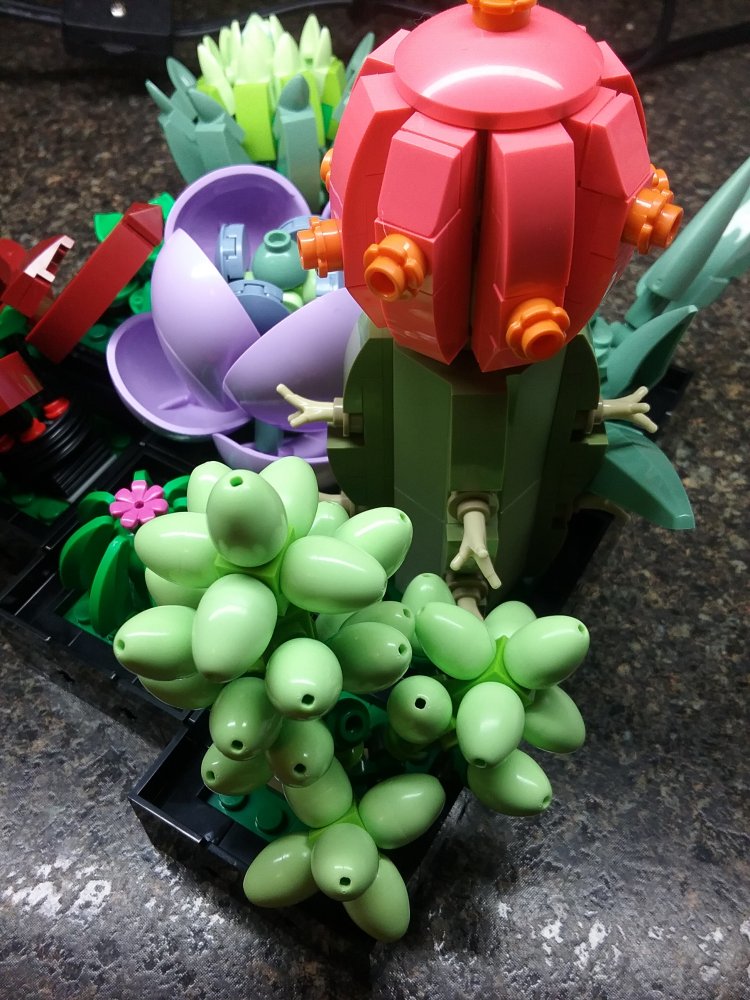 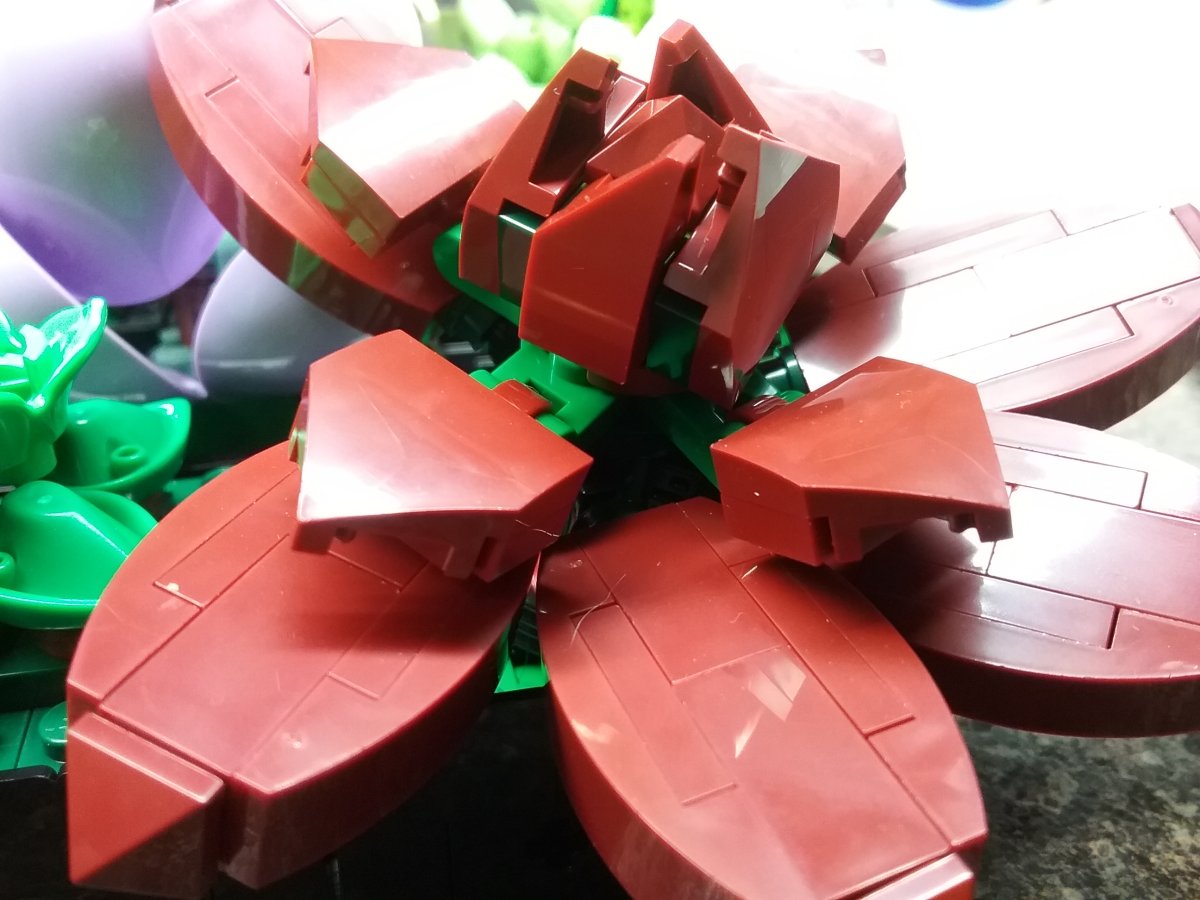 heirloomgal said:
DD finally did her Botanical Lego Succulent kit. The burros tail is my favorite.
Click to expand...

The Haworthia maughani (or Haworthia truncata var. maughanii as it is called now) and the grafted Gymnocalycium Mihanovichii are pretty good too!

meadow said:
4) The extent of your corn 'field' is no more than 24 rows, so it would all be contaminated.
Click to expand...

Yes, the whole field runs the chance of some contamination but the levels are low enough past 24 rows to accomplish whatever you are doing. That also depends upon the weather, pollen shed of the corn being grown, etc. there are a lot of variables to consider.

Pulsegleaner said:
One Wednesday in fall, many years ago (probably almost twenty now). I was at their booth and I started looking at their miniature corn bunches (for ornaments) I noticed that a lot of them looked odd, in that they were much shorter and fatter than such ears usually are. And since, at that time, the only short stubby eared mini-corn I knew of was Strawberry, I started taking a closer look. The more I looked, the more odd this corn looked. It was small, but the kernel shapes on many were those of full sized ears, and the color palette was also much wider than I was used to seeing. Then I started finding ears with kernels that had the kind of mottling I was looking for at the time, plus cobs with kernels that appeared floury or dented.
Click to expand...

Funny, the only blue corn I have grown was dwarf, although the original packaging showed full sized ears. I saved seeds and grew them for a few years, same dwarf size, so I gave up bc I wanted bigger ears.

ducks4you said:
Funny, the only blue corn I have grown was dwarf, although the original packaging showed full sized ears. I saved seeds and grew them for a few years, same dwarf size, so I gave up bc I wanted bigger ears.
Click to expand...

Blue isn't actually all that unusual in miniature corn. Hopi blue has been around for ages (as has hopi pink).
It has less to do with specific colors as it does with color combinations. Different types of corn tend to have different
"palettes" to them. That's part of why Glass Gem so took the country by storm, not only are its colors unusually bright, but its palette includes ALL of them. Before that, about the widest you could usually get was a mixture of yellow, white, navy blue, a somewhat murky green, a bit of magenta, and assorted reds and brown (via the pericarp). If you wanted any other color, you generally had to give up a few on that list to get it) Then Earth Tones showed up, which DID have pretty much all colors, but it's brown pericarp muted them.) And then Glass Gem.

Even if it had had all of those colors, it might not have attracted my eyes as much. By then, I was already familiar with the miniature form of glass gem as well (via some company in Canada that had grown it, drilled holes in the ends of the ears, glued dowels into them, and marketed them as an addition to dried flower arrangements. As I said, what originally caught my eyes was the short stubby cobs, since that was unusual at the time (now, with "Strawberries and Cream" and "Indian Berries" it is less so) Then I saw the large ear kernel shapes (most miniature corns have either rounded to squarish smooth kernels (pearl type) or pointy claw like ones (rice type). The sort of flat rectangular more or less bread slice shape a lot of grinding corns have is not usually seen.) Then came the mottling, the floury kernels (indefinable by being opaque rather than translucent) and the dent kernels, and that is what sold me.

@Pulsegleaner I just read by funny coincidence on a seed website a blurb about 'Tuxana' corn; in the description she mentions someone named Jonathan Spero and how she got this corn from him, and she goes on to say that she starts this corn indoors mid-May and transplants mid-June. I was surprised to read that since corn transplants are generally unpopular, but maybe it is not so uncommon after all. It might be worth considering for some of your precious and rare corn that you breed and have limited seed that you wouldn't like to lose. I think the lady is in NS.
You must log in or register to reply here.
Share:
Facebook Twitter Reddit Pinterest Tumblr WhatsApp Email Share Link