We have so much going on around here! We finally have our barn going up and at the same time we have a contractor putting a screened porch the whole length of the house, 54' long by 12' wide. And our DD called this evening and they found church pews for $75 and wanted to know if we wanted one. Yup. And can we use our truck and trailer to go get ours (and theirs?)

We have been collecting materials for a barn for quite some time. We thought we would put it up on land we used to have, but decided to move so we could be close to our DD and family.

So we finally got all our stuff moved up here from our old place.

And we started cleaning up a place big enough for a barn on our new place. Pictures of that are on page one of my hugelculture thread.

The place we are putting the barn dips down to a low spot and needed dirt. So we called our friendly dump truck dirt guy and ordered 4 loads. DH is like a little boy with a dirt pile and Tonka trucks and equipment to play in all that dirt with. 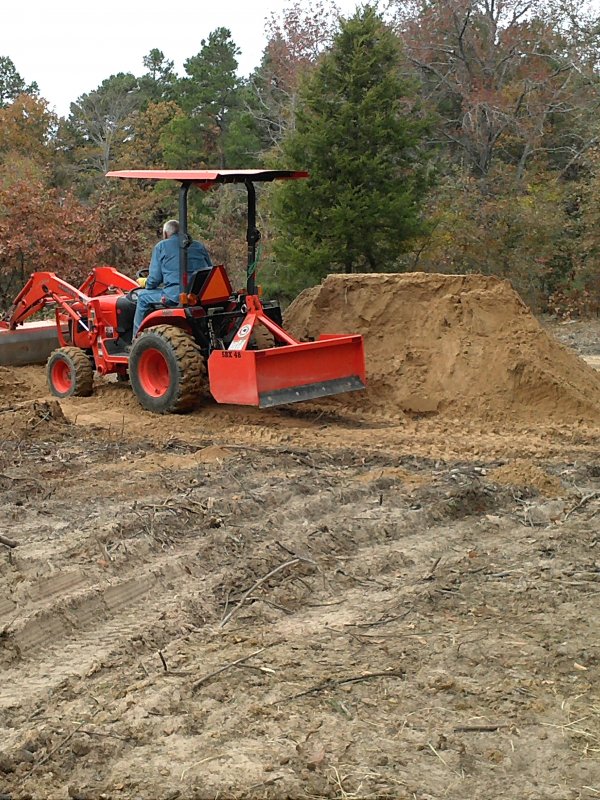 That wasn't enough, so we ordered 3 more loads of lovely dirt. Our horses played in the dirt like little kids. They climbed the dirt piles, pawed at the dirt, chased each other around the dirt piles and bucked and kicked. They had a blast. Who knew? All this time we just needed a dirt pile for the horses! We smoothed down the first 3 loads with our tractor and let the horses play in load #4. Our hay guy, Russell brought his big tractor for the other 3 loads and put them where he wanted them. He worked Saturday on dirt and getting the batten boards set up (boards and string that get the site squared up to set the poles). Today he and his friend Tim started setting poles. My husband worked all day out there with them today and yesterday.

You can see the batten boards in this picture, this is a corner pole. The corner poles took the longest! They had to be spot on, straight up, and perfectly in place. 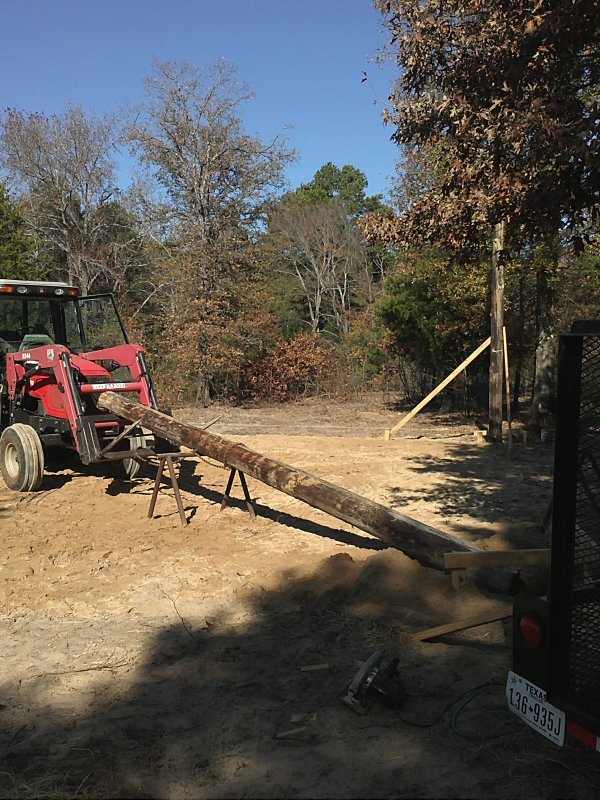 Here's another corner pole going up! They used that pipe sawhorse to get the pole positioned and chained to the tractor. 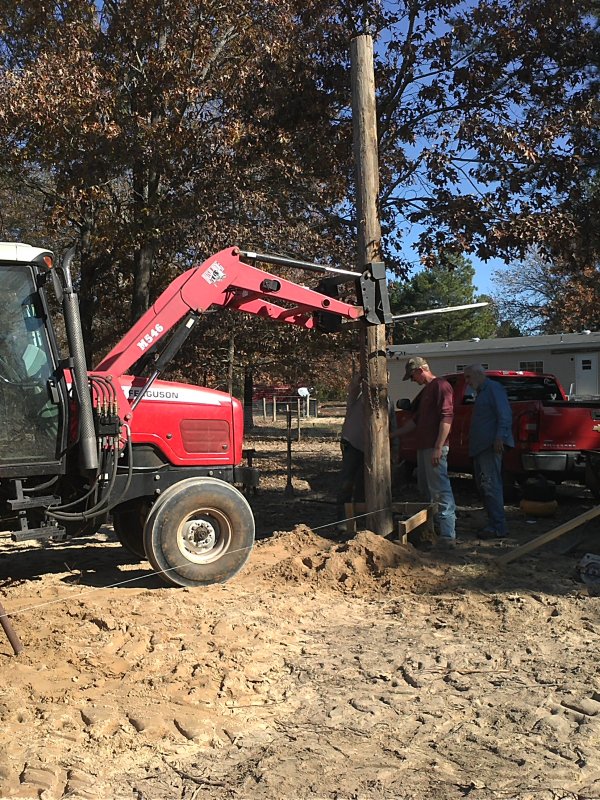 Tim has the level on the side of the pole, Russell and DH are supervising. When Tim called it level, DH shoveled dirt in the hole, Russell tamped the dirt around the pole and Tim held the pole steady until there was enough dirt tamped around it to hold it up. Then before they unchained the pole, they drove pointed 2x4's in the ground and nailed long 2x4's from the stake to the pole on 2 sides to hold the pole in place.

Today they got the 4 corner poles set and 2 poles on one side. The barn will be 36'x36' with six 12' stalls. One of them will be closed in and floored for a feed/tack room. Allowing for the size of the poles, the alley will be about 11' wide. We are excited to get our barn started! The poles range from 18' to 22' tall. After all the poles are set, they will be measured and cut to 12' tall.

Now for the porch pictures! We pass by a doublewide on our way to town that has been remodeled and really made to look nice. So one day we stopped to admire their porch and ask who did it. Well, the lady told us, her husband built the porch and he is a contractor and builder. He came out and started the bid process. After my husband's expert negotiations, the price got down to what we were happy with and construction began. They started the Monday before Thanksgiving. 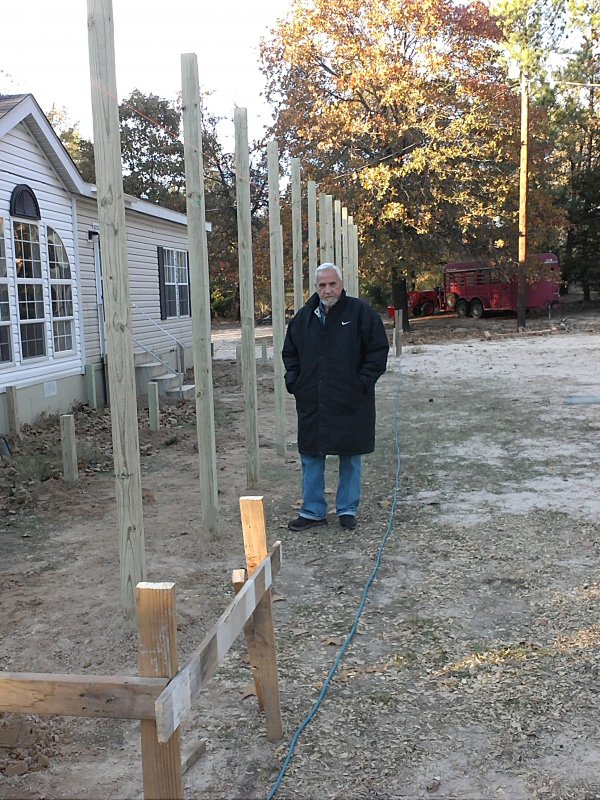 Since Thanksgiving was upon us, they laid down 2x6's so we could at least walk on them to get in and out of the house. 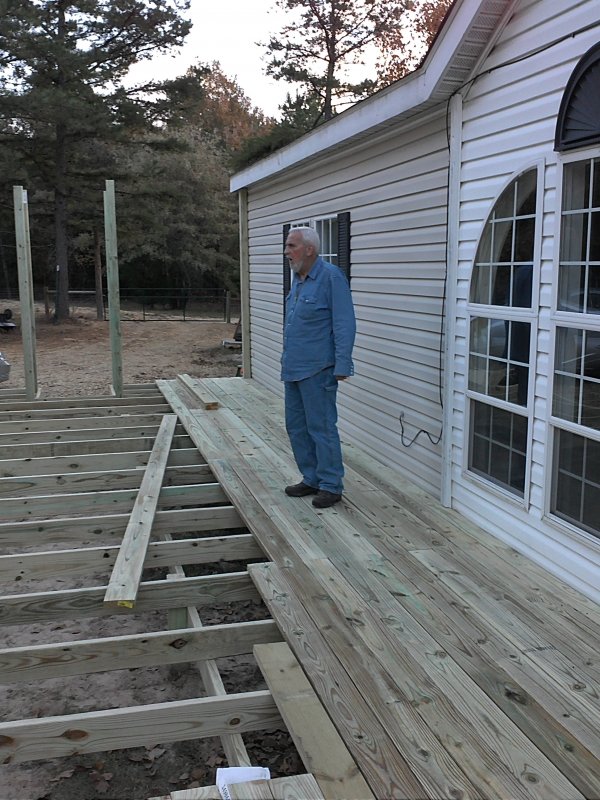 Monday after Thanksgiving, it rained, like it had been raining all weekend. So they came Tuesday and made a lot of progress. They laid all the deck boards down without nailing them in place. A few key boards were screwed in place to hold the other boards in place. There was one guy cutting, and 1 measuring and 1 laying the boards in place. The contractor had an extension on his drill that fed screws to it. He walked along, pressing the extension on the marked lines and screwing the boards down. It took him about 30 minutes to do the whole deck. Everything this guy does has to be perfect. Everything has to be exact. Every measurement has to be right and the whole porch is perfectly square. It is sturdy, well built and if a tornado comes, we'll be in the dirt under the porch! 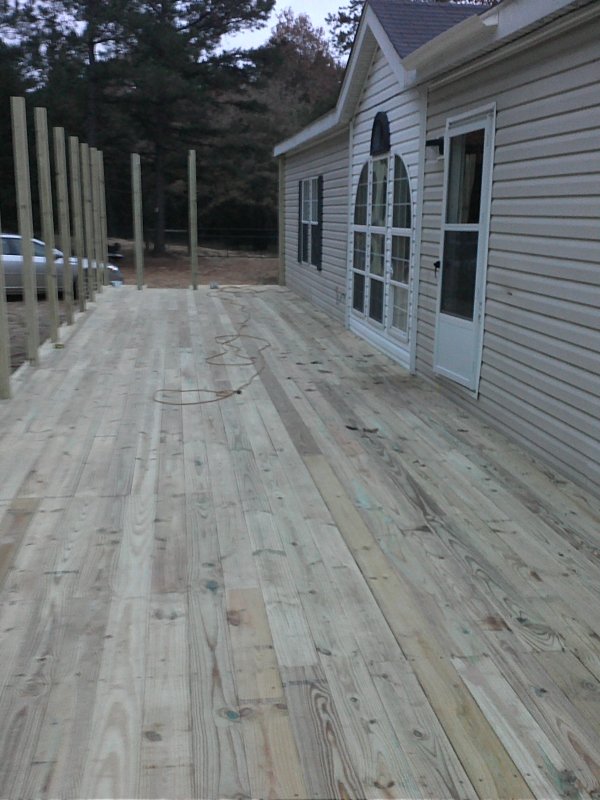 By Friday afternoon, they had the roof decked, tar paper rolled out and a few courses of shingles started. They will be back Monday to finish shingling the roof. There are 3 sets of steps, one on each end and one in the middle. The set of steps on the left, closest to the carport is inset in the porch. That way we won't be running over them backing out of the carport. 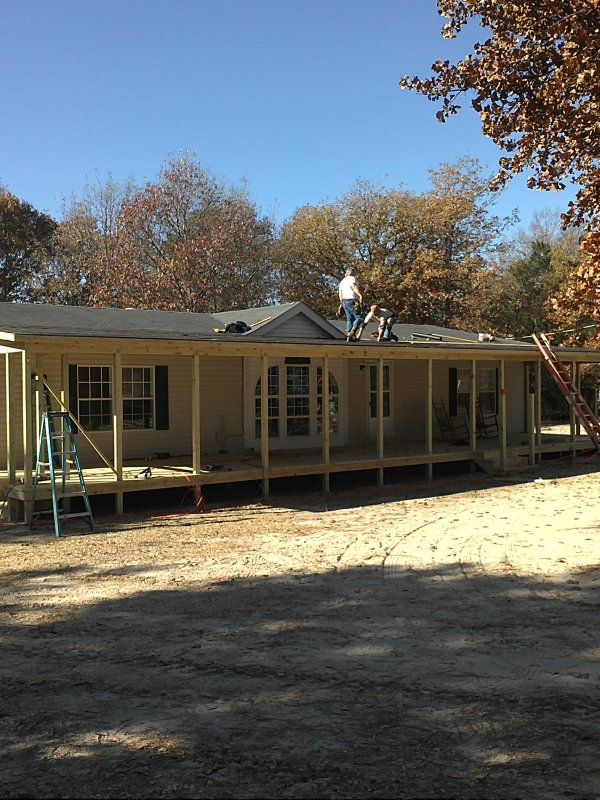 They will build a partial wall around the porch and then screens to the top. We can't wait for it to be finished! When they went to lunch on Friday, I dragged two rockers out of the storage building and we put them on the porch. We sat and rocked on our porch, thoroughly enjoying ourselves.

Wow Bay, that completely changes the look of your home. I like that porch!
What a great place to hang out!

Your barn is going to be wonderful, I have barn envy!

Thank you for sharing all of this with us....I LOVE a huge porch and hate when folks get skimpy with such things, especially the width. Can't have a porch that is too wide,nor too long, IMO. So much living can be done on a porch like that.

Can't WAIT to see the barn!

So...where's the pics of the horses playing on the dirt piles?

Love, love, love pics for threads like this...a person can talk all day about changes to their farms but a picture is worth a thousand words. Sounds like your porch guy is worth his price of hire...not too often you get a contractor proud of their work nowadays.

New sheeps, new barn, new porch....Bay, you are having one real exciting year!

Loving the porch, nothing can ruin a outdoor get together quicker then mosquitoes !!

So happy you are getting the home and farm you have been dreaming of. You and DH working together in common goals is so good to see. (and a foreign concept around this house

Wow Bay, that looks beautiful! At first I didn't understand why there were posts sticking way up. Duh, must not have read "covered porch" and had just deck in my mind. Got it on the 3rd picture, haha.. It is going to give you some nice shade. I'll come over next summer and have some ice tea with you. Save me a chair.

Inquireing mind wants to know why are you building a barn in a low area of your property ? I would have opted for the highest point.