Been waiting to close on new farm since April. It’s July 11, still waiting. Grrrrrrr…..
But it feels like it’s getting closer. Maybe.

There are dead Post Oak trees ringing the house. They have to come down. Tree cutter is coming in the morning to take down 4 trees. 3 big oaks will have to be taken down a limb at a time from the top down. 2 are far enough from the house that Bennet can take them down.

Bennet was all about me hiring this guy to take down ALL the trees and have him clean up the mess—until I told him they oughta pay for half of it. LOL He put the brakes on so hard, he was kicking up dust. He put it in reverse and said he’d bring his tractor and clean up the mess, haul it all out in the pasture and this winter we can burn it. And he can take down those 2 that are further from the house. That would be his part. Hahaha!

I agreed. So the 3 trees will cost me $1700 to get them down. Clean up would have cost me double that, if not more. The 2 more trees would have kicked it on up in the stratosphere. I think I done good.

Hugemongous giant oak out far enough away, can fall in pasture. 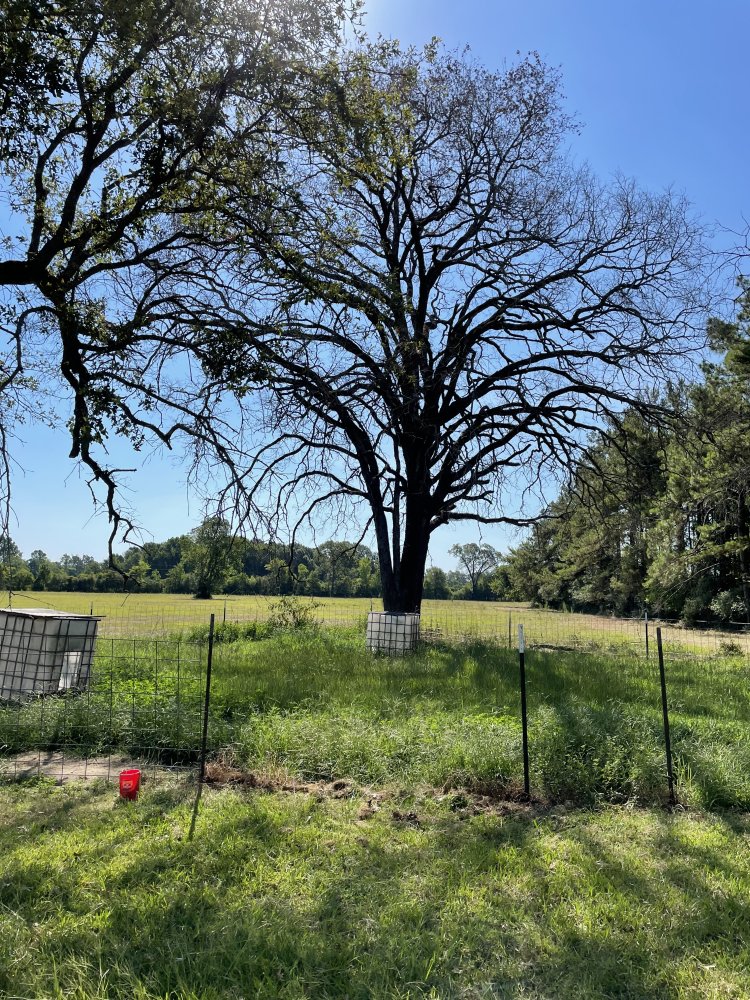 Tree #2, in front yard. Will have to come down in pieces. 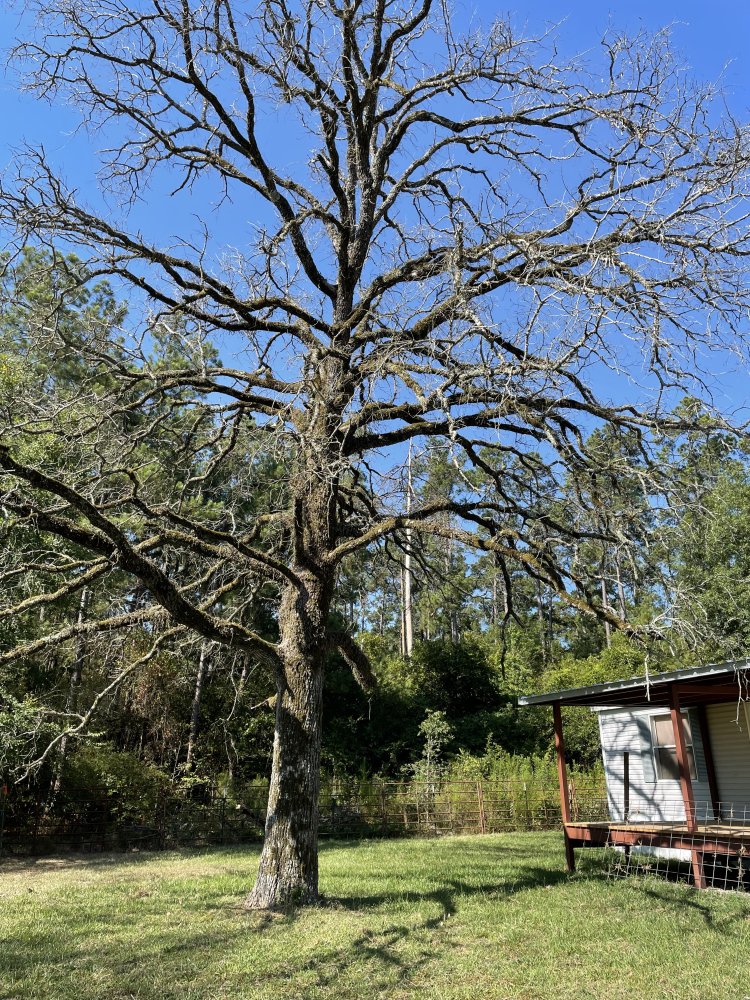 Tree #3, will also have to come down in pieces. It’s opposite the end of the house. 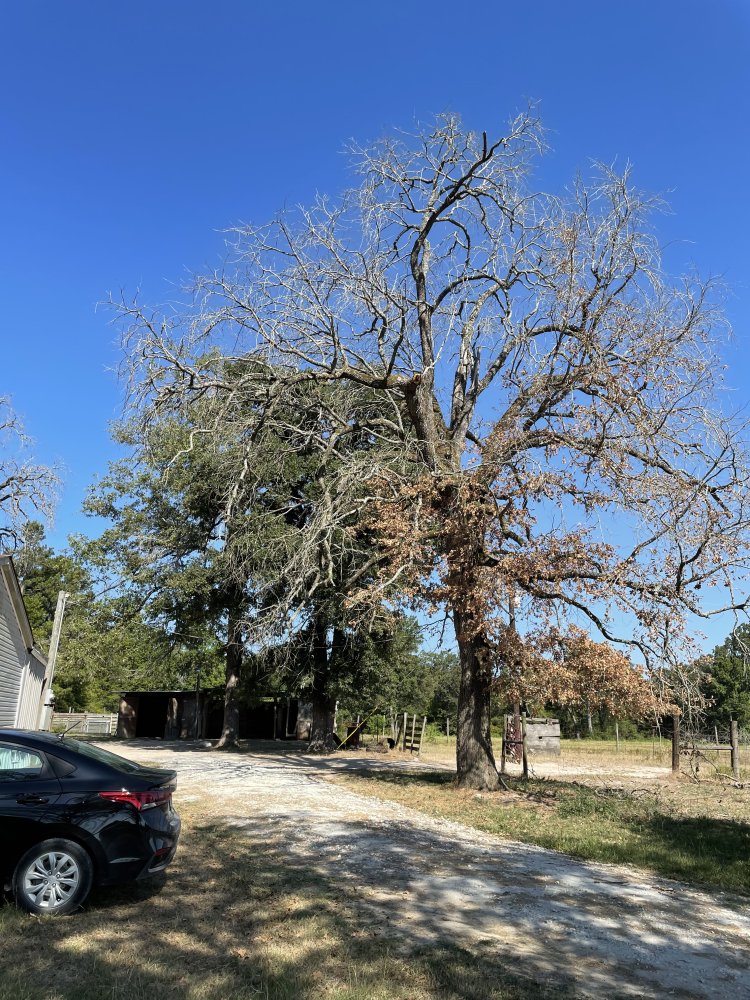 Tree #4, it’s at back of house, will have to be dropped, piece by piece. It’s leaning towards the house. 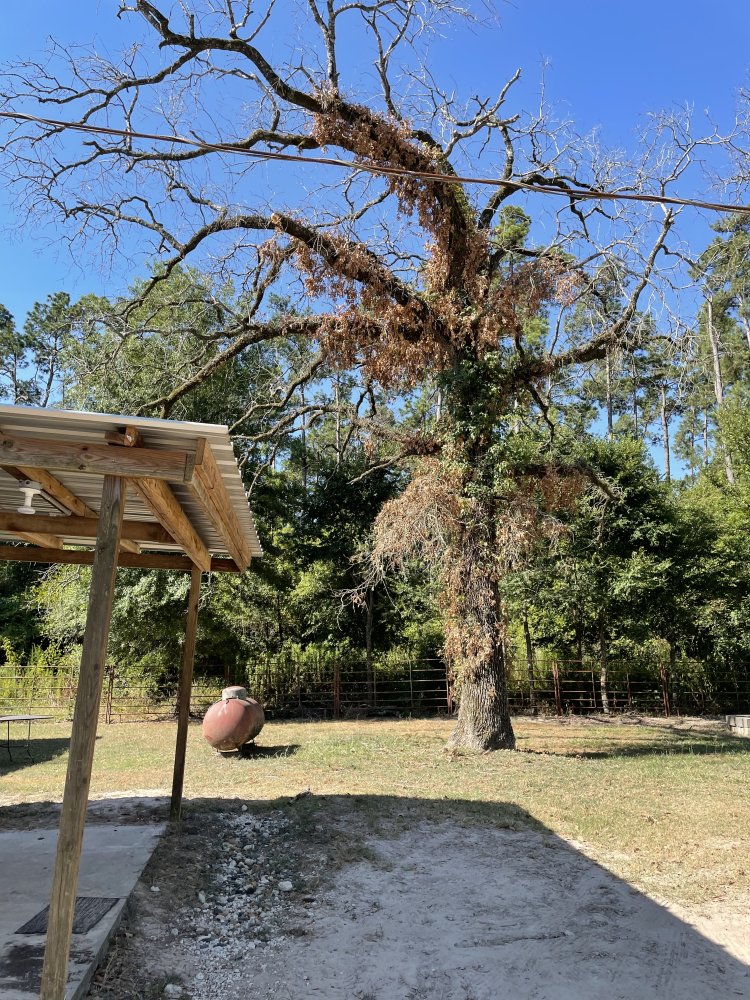 Tree #5, it’s far enough away, leaning towards woods, can pull up red pipe fence panels and Bennet can drop it. Look closely, dead standing pine on other side of fence, but poses a threat to the new fence I’ll put up. That landowner said we could cut it. 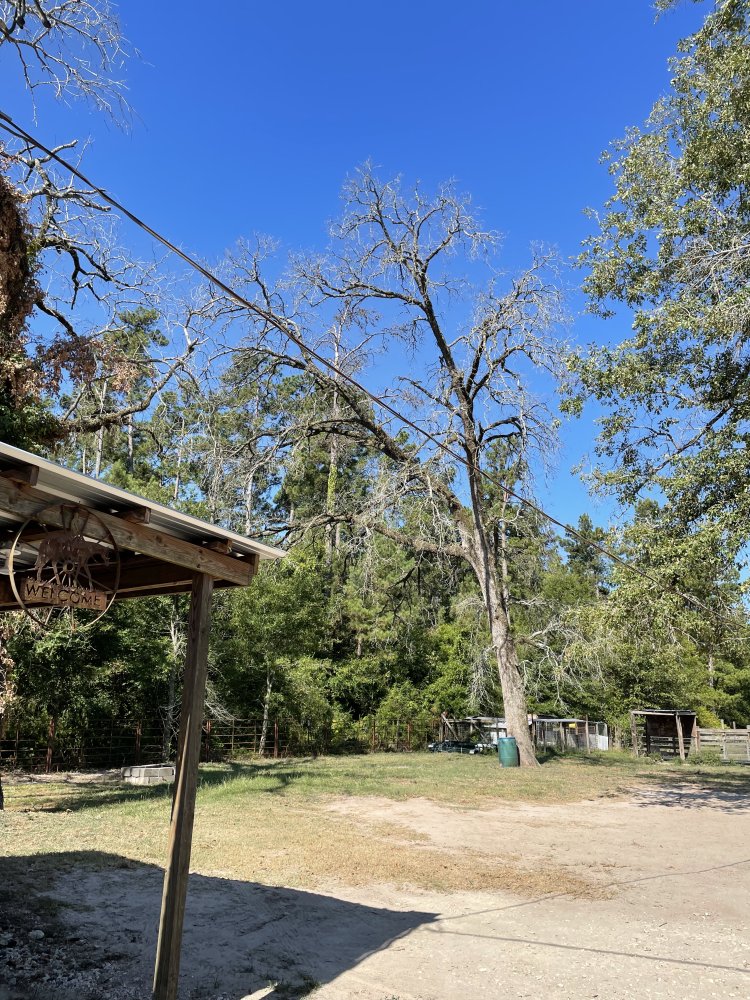 Tree #6, the dead standing pine. It’s been dead awhile, it’s rotten and dangerous. Tree cutter will take this one down, fell it in the woods and leave it, with land owners permission. 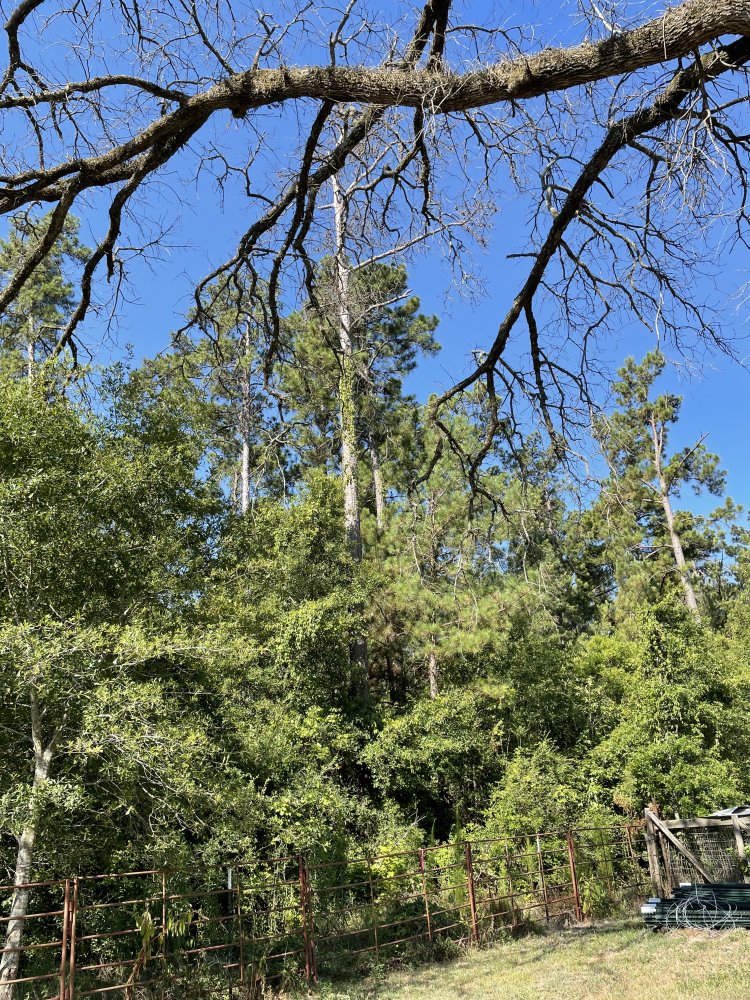 I’ve been over there this morning taking up cow panels that were around Tree #1. I took before pictures, tomorrow I’ll get during pictures.

Did they die from the "sudden oak death" fungus? They dont look broke down like old age will do to limbs.

Snowmeggdon of February 2021 burned and damaged them badly. We had temperatures below zero and this kind of oak tree can’t take it. Now we are in drought with 100 plus temperatures and no rain, it has finished them off.

The tree cutter said he has been cutting a lot of trees that that freak winter storm damaged. Drought is killing them off now.

baymule said:
Snowmeggdon of February 2021 burned and damaged them badly. We had temperatures below zero and this kind of oak tree can’t take it. Now we are in drought with 100 plus temperatures and no rain, it has finished them off.

The tree cutter said he has been cutting a lot of trees that that freak winter storm damaged. Drought is killing them off now.
Click to expand...

it is too bad you can't use them for lumber.

Drought can do those trees in.

ducks4you said:
Drought can do those trees in.
Click to expand...

In our drought of 2011, many trees died. We had 2 months of 100 degree heat, no rain. It was sad, driving along and seeing all the brown dead trees.

These are already damaged, they didn’t stand a chance. I’ll be planting some more trees. I’m thinking sycamore and redbud and dogwood.

Look into dwarf cultivers. They will only grow about 15 ft tall, still provide shade, but won't threaten your house in a storm.