common sense out the window .......the new beginning

should have kept my mouth shut....
right after i posted guess what they called....boiler down tried to walk them though it, no luck had to go in

as i mentioned early the pump was running without a spider coupler, well all that banging it snapped the ears off one of the collars..and it's a special one, luck the electric motor shop was open gave them one of the one collars that had a small shaft bores, while Gilligan was gone fixed all the water leaks in the boiler room good lord what a lazy sh!t gilligan came back in 2 hours put everything back together...
omg what a racket the bearings in the pump motor are shot...not much i could do about that on a saturday..oh well

while waiting on gilligan the g/m and i had a talk. shes good with all my demands that the owner and i talked about....
told her be ready for some big bills coming once i'm back,,,, i'm surprised that your still in operation i walked around can see nothing has been maintenance wise since i left....

yes the first couple weeks will be hell, but i knew that already..

did charge them 2 hours for driving in on top while there.....

grrrrr.... while waiting to meet my roofer in gso, the Continental field rep called one of the buffers rasp head has locked up and wont turn either direction.
<told them before i left that the bearing was needing replacing>
found out while gone skipper and gilligan tore into it and screwed it up< this bearing has only 70 roller bearings in it, the parts supplier told them that theres 72 bears in it>....nope nada have counted them before...

anyway the 2 Einsteins made a couple a couple roller bearing to put in there...the only thing i could come up with is that it's to tight and the bears cant rotate on top of being worn out....

asked the field rep to order a new bearing.. will be there next day early am delivery...

he talked with the owner, he does not want gilligan putting in the new bearing.. the rep was coming though and will be stopping by plus the owner asked for me to come in....
here we go again one of my pet peeves why i left....not asking me directly he said she said

come to find out while the Einsteins had it apart they could not get the locking collar to lock, so they used lock-tight on the whole thing.....OMG

since i had the rep on the phone told him to call Gilligan and start removing all the parts he can including the locking collar....this should be interesting when i go in tomorrow morning, of course i will be late....

really cant even enjoy my late week as a semi-retired person...

Lol....Sounds like you need to hit Gilligan in the head with a wrench. How do you work on boilers and not know how to reset a low water cut off switch? I wouldn't let him near my boilers. Major your feed water pumps 3600 rpm's? if so look at the black Omega couplings, best money I ever spent.

Lickbranchfarm said:
Lol....Sounds like you need to hit Gilligan in the head with a wrench. How do you work on boilers and not know how to reset a low water cut off switch? I wouldn't let him near my boilers. Major your feed water pumps 3600 rpm's? if so look at the black Omega couplings, best money I ever spent.
Click to expand...

well the was a fun 4 hours... thank goodness for the rep being there.
where to start..
first off during my trip the rep called me and asked why wont the turntable turn even though it wont throw a code...< they stripped a gear in the gearbox> so that was replaced worked fine for 30 tires and then it would start spinning on the shaft..
found out that gilligan made extra bearings he used some cheap mild steel rod. he watched me before make a bearing for it but i used a piece of chromed drill rod.

this is where the disaster starts...

the environmental water spray unit has been leaking water for a while which has been running down the turntable shaft and filled up the bearing area with water <really you see water leaking, you fix it>duh....fixed

once we got the rasp head unit off and out of the way<yes that lock-tight was a b!tch too break loose> vacuumed out the water in the gallery had to emery the surfaces of the shaft and locking collar to get all that crap off..
gilligan chimed in ...<it's just going to slip>

pulled the bearing assembly took the assembly into once again my office, tore that apart replaced the bearing and put back together... real simple
cleaned all the locking surfaces again, torqued all the bolts, realigned everything back to zero...
once again gilligan chimed in ....<it's going to slip>

looky here sport the reason you could not get it to lock was because you did not line up the collars correctly...

had the operator put a tire on and omg it ran like a champ...had no doubt we stood there for 10 tires it turned smooth as silk... gilligan did not say a word.....

while waiting around to making sure everything was running right, so decided to take the bearing apart since it was a 3 piece and just see what was going on<like i didn't know> 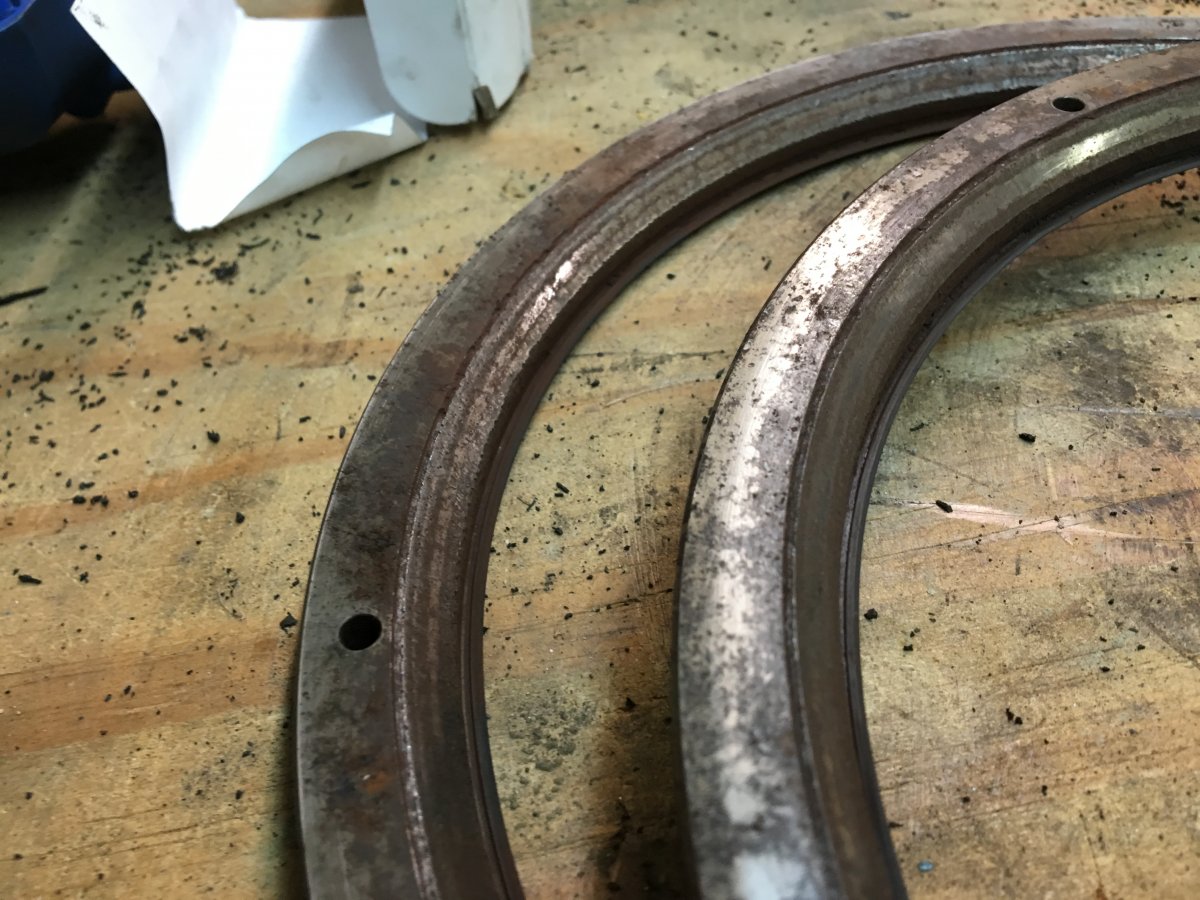 this is why you don't use mild steel as a bearing 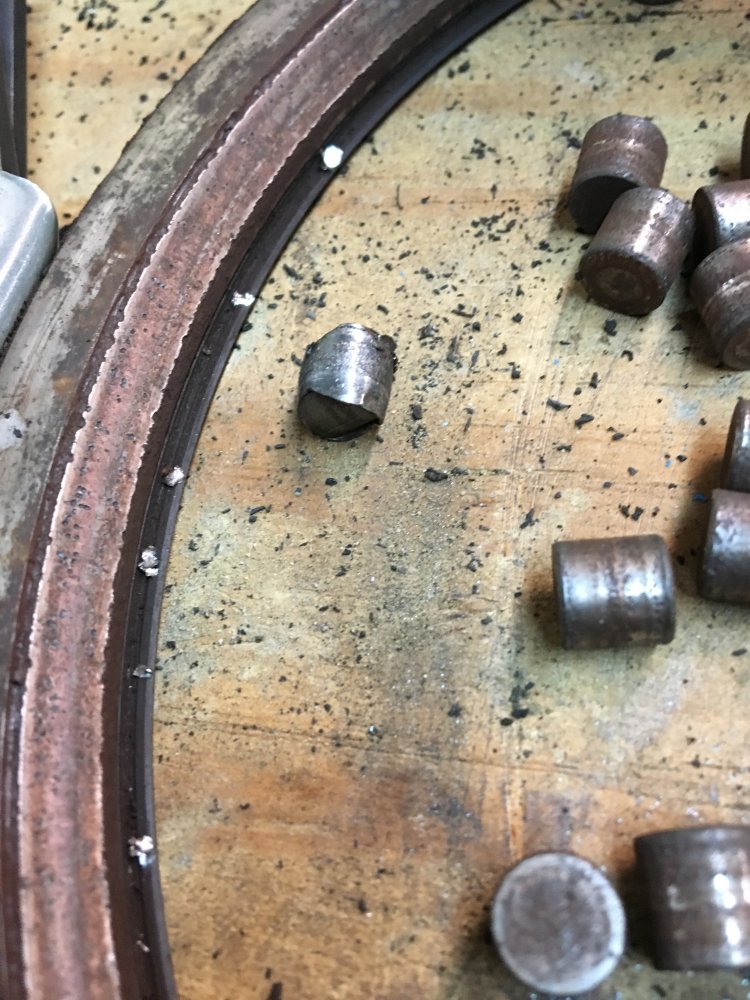 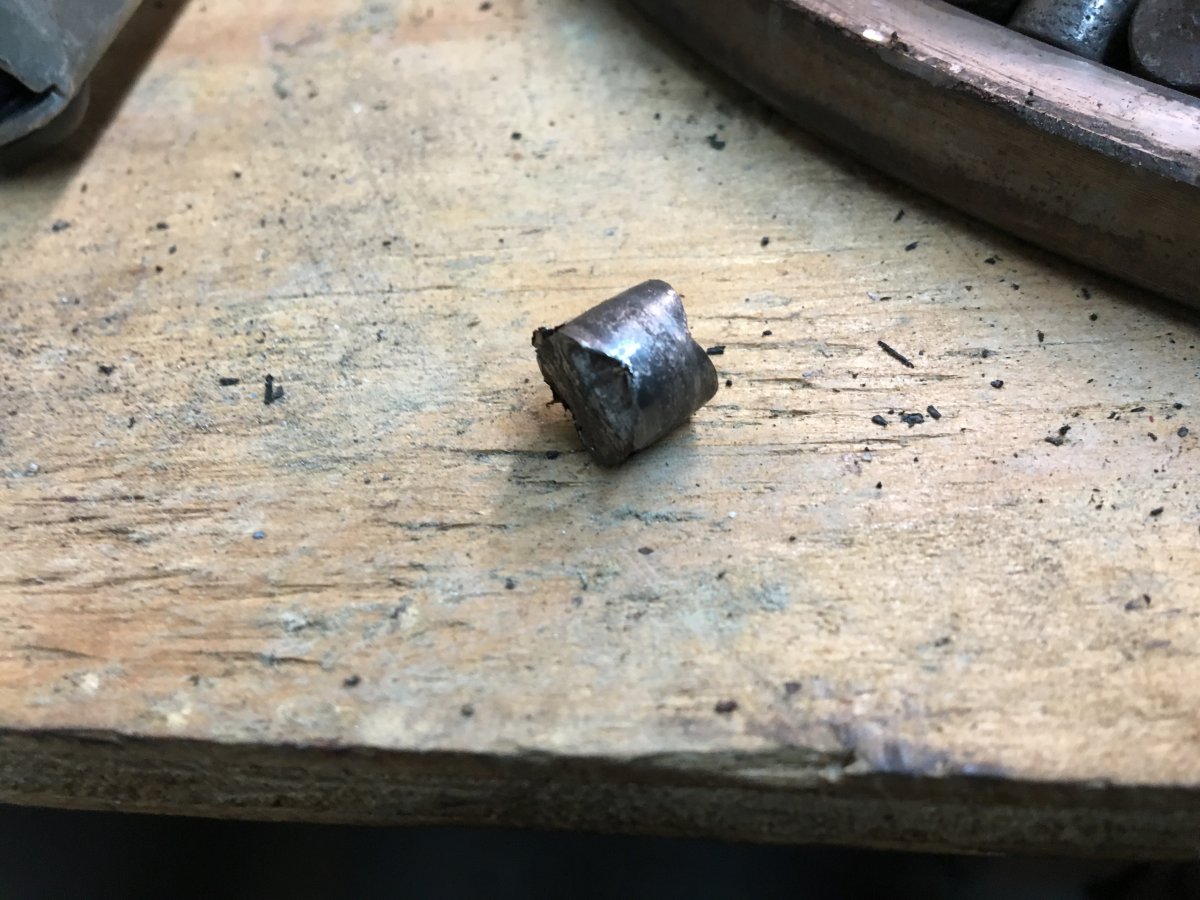 after about an hour of watching the buffer run, the owner walked by... well?
good as gold.....
he looked at gilligan .....wow if looks could kill

he pulled me off to the side...< i usually dont say this to anyone but thank you for coming back, this place has gone to hell since you left>.
@Ridgerunner i would love to rap a wrench around his head....

How on EARTH is it Possible Gilligan Still has a job?

Carol Dee said:
How on EARTH is it Possible Gilligan Still has a job?
Click to expand...

have asked myself that same question for many years.......

the lack of basic common sense revealed in those pictures is just... the guy should be banned from touching anything above a potato.