Earthquakes in the Gulf of Alaska

Do we have a 2020 meme that includes a tsunami?

The warning has been cancelled by the USGS and by the Canadian authorities. Evacuations had already taken place and there were between 300 and 400 people in a Kodiak Island high school gymnasium with the superintendent of schools passing out masks.

It was a 7.8 earthquake and a 5.1 quake followed, close to Vancouver Island. (@aftermidnight ?) This is near the same location where a 9.2 occurred in 1964, sending a tsunami to Crescent City California.

I remember that tsunami and how it effected my family. Both my aunt and uncle and their son and his wife lived in Crescent City. This was before the days of an adequate warning system.

My cousin's home was close to the water. When the waves first hit, his wife was dreaming that the Soviet navy was invading. A log washed up against the door but they were able to push their way out of the home and wade to higher ground. The house was lifted off its foundation and floated away. Ultimately, it ended up in the pool of a local tourist attraction and pictures of it were featured in newspapers.

My cousin and his wife showed up at his parents' house on higher ground. They awakened them from sleep also, when they knocked at the front door.

Steve
@thistlebloom also has connections to Crescent City. I wonder if her husband remembers this event.

I did some research and it appears fire ants can damage okra. Very last on the FAQ: https://aggie-horticulture.tamu.edu/archives/parsons/vegetables/okra.html

Ex, now SO, lived in Crescent ****ty his whole life. He was 10 when that tsunami hit and remembers it well.

?? That post was not supposed to be for this thread. How confusing.

digitS' said:
@thistlebloom also has connections to Crescent City. I wonder if her husband remembers this event.
Click to expand...

No, he doesn't as a matter of fact . It was my parents who lived there for 20 years. It's a beautiful location, but I'm glad to no longer have a reason to go there. I share the same sentiments about it as Rhodie.

No, of course it's not 2019. The Kronosaurus was around before there was color in photographs!``` 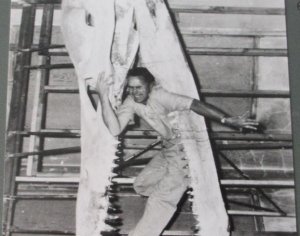