I would Like to say that Eva is able to sleep outside of her crate, But, I went upstairs this week to do computer work, and came down and she had a pulled a wooden knob off of my old ceramic bowl stand in the bathroom and had chewed it beyond repair. WHAT can I say?!?!?

NOT a good week for this puppy. I took her out when I was home yesterday to clean stalls. She disappeared...for 30 minutes. I was conVINCED that I was going to scrape her off of the highway bc somebody ran her over. So, I got the truck out to search and Eva comes tearing around the corner of the garage. Obviously she had been west of the fencing. I think she was tracking a deer bc I saw deer last weekend, first time in Years. Eva just bought herself a good month of sitting on the lunge line outside while I do outside chores.
She digs holes while on the leash. I emptied my fly baits into these holes, forGETTING that Eva might dig them up. I bring her inside and she reeks of dead flies!!!

DH were going to dinner, so I stuck her in her crate, pondering How I was gonna get the stink off of her. I considered Mr Clean with Febreze, but dismissed it as possible toxic.
I remembed that old cans of tomato juice that I had bought years ago, just in case a dog got hit by a skunk, so, when I got home I prepped the bathroom. When I put on the choke chain and leash and pulled Off the collar, I think Eva got worried that I was kicking her out of the house for good. IF she had talked to Pyg, Pyg would have told her that Somebody was getting a bath, and, "Thank you very much, but I don't Need a bath."
Fortunately I only had to hit her face, chest and front paws with the tomato juice, but, it did inDeed kill the stink. I made a mess of the bathtub, but I got all of the tomato juice off with oatmeal dog shampoo.
After that, I dried her off with a towel and used my blow dryer on her. Eva's crate is right next to the tv and I didn't want her shaking water at it and shorting it out!!

Wiped down her crate's bottom, put down a fresh towel, fed both dogs---Eva still eats in her crate and she knows that both her crate and food belong only to her--and all was well.
This morning I added more used bedding on top of the two holes with the flies and put a cinder block on top of each to keep her out of them.

It might not have been funny at the time, but this made me laugh.

My 12 1/2yo dog, Pyg is now in surgery to amputate her front leg. We have been fighting cancer in her right paw for 3 years. Chemotherapy beads seemed to work, but failed. My Vet recommended amputation in 2017, and I got 2 other opinions, and they all recommended the same thing. Dr. Berry at the University of Illinois Vet clinic did a whole workup and it looks like the cancer has not spread. My Vet cannot do the surgery, so I went to a very good local clinic, SportsVet, and dropped her off there at 8AM this morning. The photos will be small, but the one is graphic. This slow growing cancer continued to grow and it is/I guess, Was, an open sore. I was constantly wrapping it with Vet wrap, and she has been taking what I call "Dog-profen" 2x/day for the pain. Dr. Berry says that she has been in constant pain and licking this wound.
I would appreciate prayers for my dog. She has been a wonderful companion since she was an 8 week old puppy, and we don't ever leave her for vacations. DD always house sits. Thanks for your prayers!! 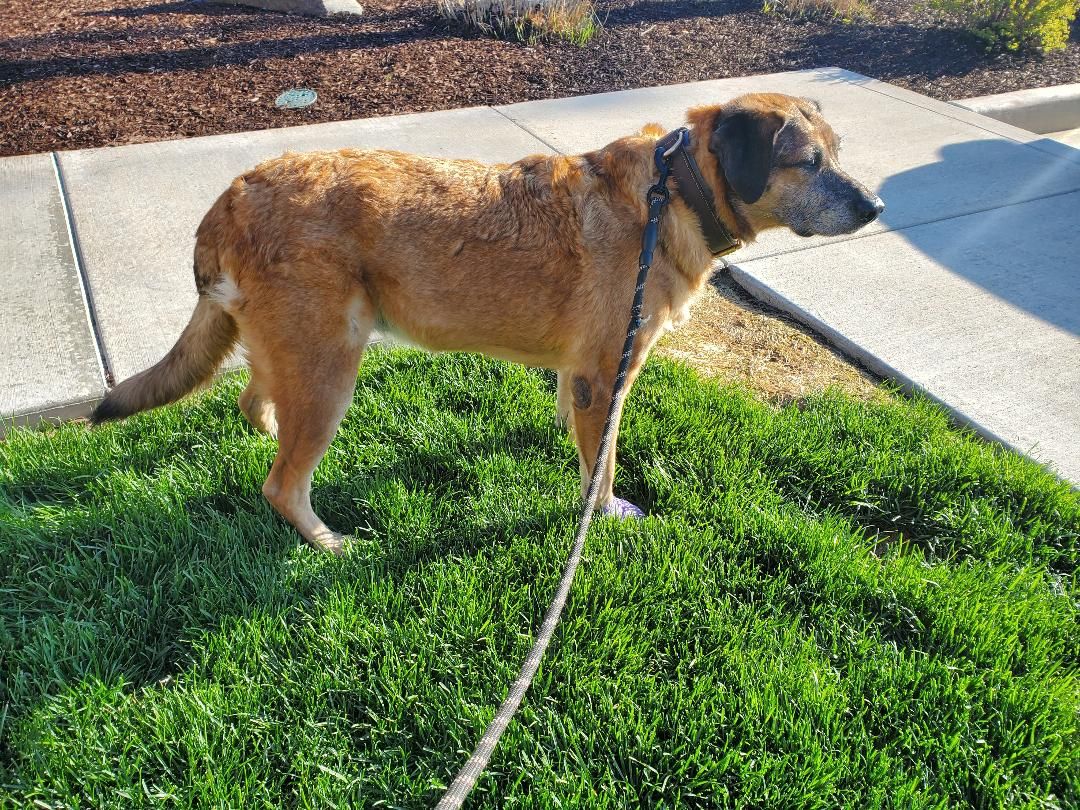 Thanks for your prayers!!
Pyg made it through her surgery great!!
SURE APPRECIATE your thoughts and prayers, I was prepared for her not making it through, even though she is in good health.
Been up since 4AM, going over to DD's for wine and a nap!

ducks4you said:
Thanks for your prayers!!
Pyg made it through her surgery great!!
SURE APPRECIATE your thoughts and prayers, I was prepared for her not making it through, even though she is in good health.
Been up since 4AM, going over to DD's for wine and a nap!
Click to expand...

What a sweet girl. I know she will make a complete recovery in your loving care. I had a 3 legged cat once. She got around just fine. Your precious Pyg will too.

I will be home the next 2 weeks to nurse her. Her staples come out in 2 weeks. She is on 4 meds. DD helped me go through the instructions and figure out WHEN I give her WHAT. The Vet was very specific about dosage, so several medications are given with 2 different mg dosage pills/1 dose.
I was still catching up on my sleep, so she read the instructions, deciphered them, and gave me a schedule to follow.
Here are her meds, which @ninnymary should enjoy 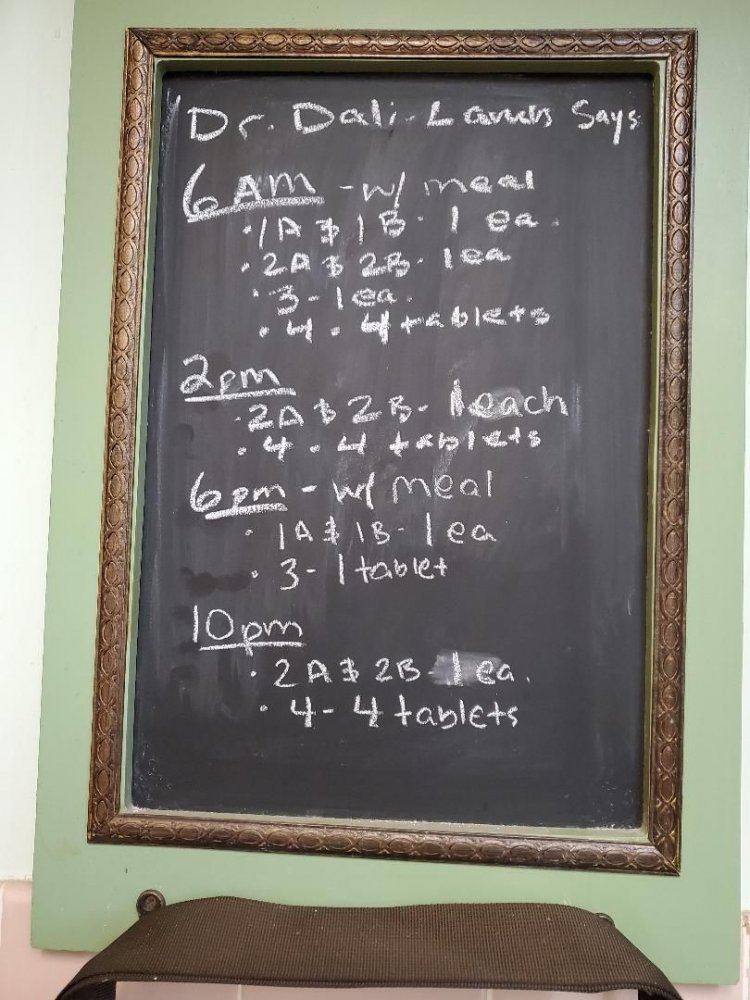 :
1) Clavamax (antibiotic), to prevent any infection. DD researched and found that it is amoxycillin. BOTH DD's warned to give ALL of it to her, so that there isn't any bacterial resistance. Dose: 427.5 mg/2x/day
2) Gabapentin, for pain. Dose: 400 mg/3x/day
(Prior to surgery she was on carprofet.)
3) Rimadyl, to reduce inflammation. Dose: 75 mg/2x/day
4) Tramadol, to decrease pain. Dose: 200 mg/2x/day

Pyg is now on 2 meals/day, breakfast is pulverized pills with scrambled eggs. Other dosages get pills rolled up in cheapo sliced cheese. If you ever have to do this, I suggest that you use 1/2 slice. Sometimes animals aren't that hungry, and you will run out too soon.
We bought her a harness meant to help support your dog, and it has a handle on top. I am not using the "cone of shame" right now. The wrapping and the harness prevent her from trying to remove them.
Last edited: Apr 29, 2020
You must log in or register to reply here.
Share:
Facebook Twitter Reddit Pinterest Tumblr WhatsApp Email Share Link