With Summer almost over & the end of the growing season approaching, maybe this is a good time to review & share what worked this year - and what didn't.

Last year, I grew a climbing cowpea from @Bluejay77 that did exceptionally well. As it happens, there was a row of chard directly adjacent - and it too did exceptionally well. The leaves were almost perfect; virtually no insect bites, and no aphids. The wasps which were attracted to the cowpeas when they started blooming, crossed over to the chard to hunt - and they were relentless.

So I thought I would repeat that arrangement this year, planting the chard next to a trellis of yardlong beans. The results have been the same - nearly flawless chard, with no caterpillars or aphids. My hand is in the photo to give it scale. 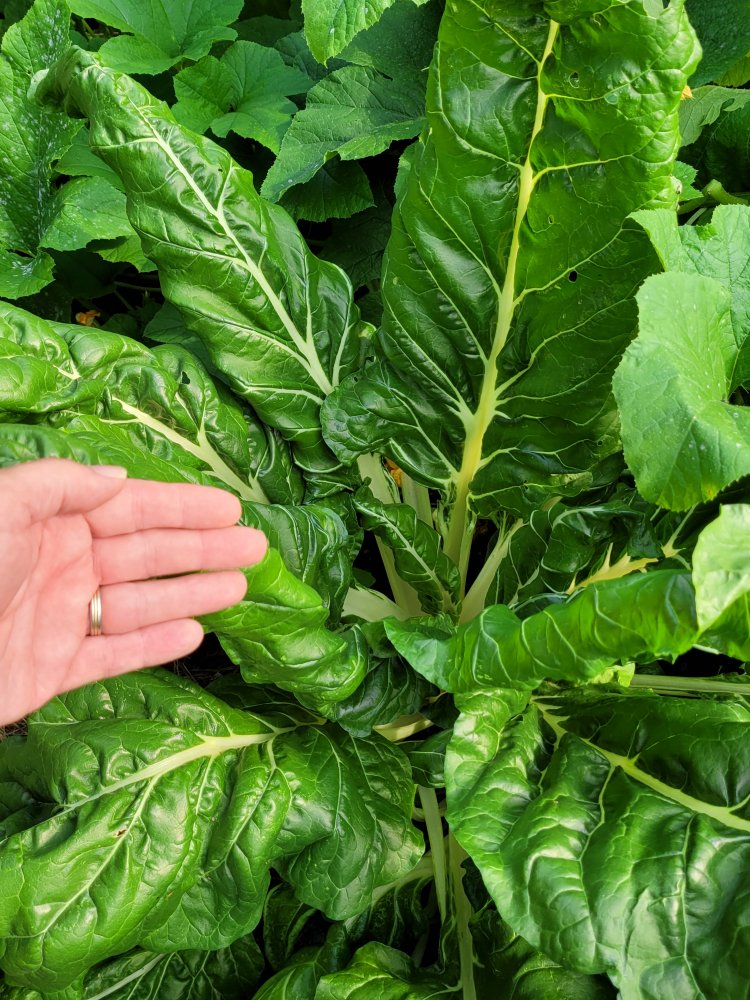 I believe this works because the chard, as a summer green, begins its strongest growth just as the cowpeas / yardlongs begin blooming & attracting wasps... and the wasps, as predators, keep the surrounding plants free of most insects. I should point out too that whatever the cowpeas produce to attract the wasps (on the extra-floral nectaries, the bumps on the stems below the flowers) it seems to pacify the wasps. When picking the yardlongs, I can gently bump or shake the wasps if they are on a pod, and they will not become aggressive.

In 20+ years of growing yardlong beans, I've often been harvesting while the wasps were literally swarming around me, and was only stung once. That time I grabbed a pod to pick, and was unaware there was a wasp on the other side... I grabbed the wasp, and it stung me. Even then, it was just what I would call a "warning sting", more like a thorn poke than a bee sting... I let go, and the wasp just flew to a nearby leaf with no further sign of aggression. Someone really should study what the cowpeas/yardlongs are feeding the wasps & market it, since stoned wasps apparently don't like to sting.

It would be really interesting to try this experiment with a member of the cabbage family, to see if the wasps would control the cabbage loopers. That would be good organic pest management.

Interesting! This fall we have had a much higher than usual wasp population around the yard; I can't help but wonder why that might be. I had no idea they liked cowpeas!

Eta: there has been some research done it looks like, at least in terms of cowpeas and wasps as pest management, apparently maruca vitrata is Africa's worst cowpea nemesis and it's wasps that control it...

Just an observation, regarding plant behavior. Quite a few plants appear to respond to shortening day length; beans stop flowering & abort younger pods, and some squashes & gourds begin to form female flowers in large numbers. Perhaps responding to a memory of the short days in their tropical origins?

This response is especially interesting. I've allowed Malva sylvestris "Zebrina" to naturalize in my vegetable gardens, to attract pollinators, act as a trap crop for Japanese beetles, and introduce some random beauty into the vegetable garden. They also have very deep tap roots, and will punch holes deep into the subsoil wherever allowed to grow.

They self-seed everywhere, and I allow some plants to grow wherever they will be out of the way. They will germinate in small numbers all summer. But I've noticed a major difference in the Spring-germinated plants, and those which come up in late Summer / early Fall: 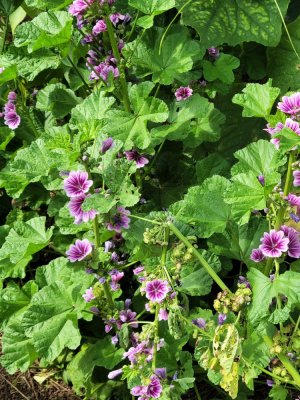 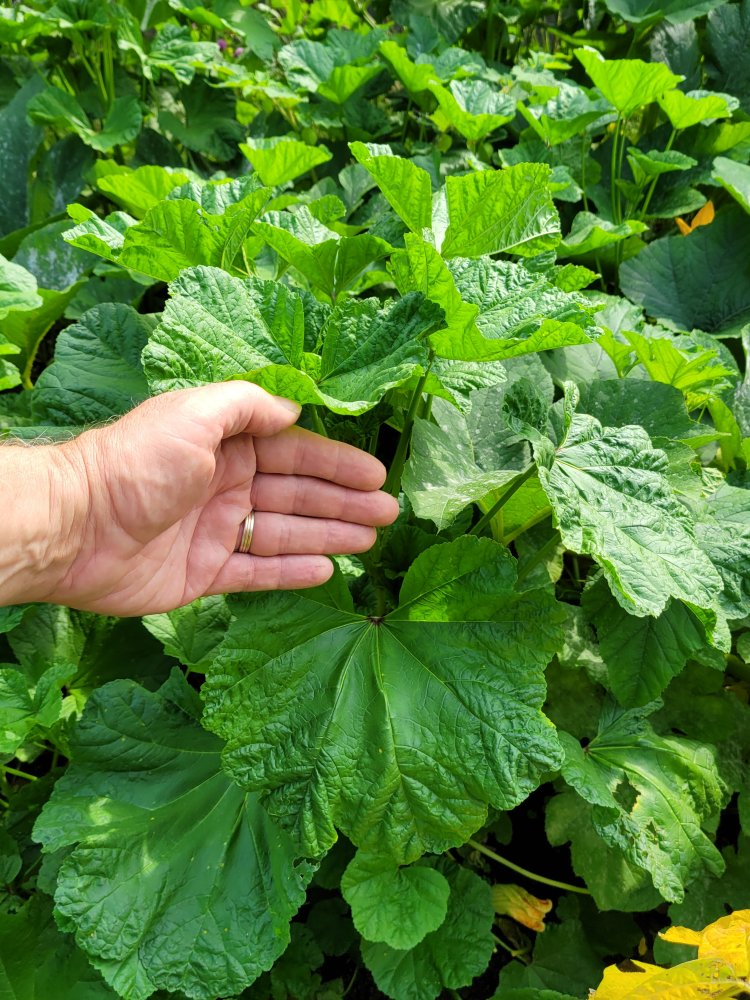 The earlier plants will set seed, and most will die soon. The later, larger plants will not flower until very close to the equinox; they will survive the first few frosts, and be one of the few remaining food sources for bees. They will even survive light freezes, and remain in bloom until the temp gets down to 27-28 F. degrees. All mallows are supposedly edible... I'm tempted to sample these large-leafed plants. (I'm assuming they would be similar to okra leaves, to which they are related.)

I'd be curious if anyone else has observed such widely different growth habit, driven only by the date/season germination occurred?

Well, I have certainly noticed how some weeds grow after the first frosts .

When I was a young gardener and in a new location, I had quite a large cabbage patch. The first year, the cabbage worms were terrible. The second year and for the remaining years that I was there, the Wasps patrolled the garden in such numbers that I had to be cautious about every move that I made out there. Very, very few loopers showed up again.

Zeedman said:
...
It would be really interesting to try this experiment with a member of the cabbage family, to see if the wasps would control the cabbage loopers. That would be good organic pest management.
Click to expand...

we normally have a large wasp population but they can't control the cabbage loopers even with me helping. in order to grow cabbage here i'd have to do it under cover.

Zeedman said:
...I'd be curious if anyone else has observed such widely different growth habit, driven only by the date/season germination occurred?
Click to expand...

my only observations of those plants is similar to what i think of morning glories - they both drop way too many seeds that persist for way too long in the soil seedbank (the mallow is even worse IMO) - plus the groundhogs like to eat their leaves. i don't let them grow in any vegetable garden inside the fenced areas. outside the fences the deer and rabbits do seem to eat them (same as the hollyhocks, purslane, lambsquarters, plantains, etc.)...

as much as we do like the flowers i weed them out of most gardens - the wide leaves and aggressive growth and flowering means they easily outcompete a lot of the bush bean plants they end up being paired with.

Zeedman said:
I'd be curious if anyone else has observed such widely different growth habit, driven only by the date/season germination occurred?
Click to expand...

I've noticed this with hardy annuals sown after the summer solstice, or in autumn. Borage sown in July didn't flower until the following spring, and the resulting plants were absolute giants, a good 4 ft in all directions, and dripping with flowers. They were swarming with bees for weeks. Same with the scabious plants. It's a method flower growers exploit for earlier and much larger displays. In my case it was accidental! Chard does also seem to enjoy the late summer/autumn period.

i've reminded myself yet again that interplanting often isn't a good thing for most varieties of beans, but if you do find a good combination it can work well.

previously to this year i'd also thought that deer would mostly leave beans alone once the plants got older. nope, the deer have been feasting on and trampling even my oldest plants still alive in the North Garden (not many of them are left, but fewer each day). same for squash plants. the deer are going in and eating even some of the older plants and leaves even if they prefer to eat the newest and tenderest leaves on the ends of the vines in their searching for squash to eat they're also eating flowers and leaves inside the plant boundaries.

I have seen wasps eating the smaller tomato hornworms. How do they eat all that and still keep their tiny waist line?

baymule said:
I have seen wasps eating the smaller tomato hornworms. How do they eat all that and still keep their tiny waist line?

Or take off holding food as heavy as themselves? They must take flying lessons from the bumblebees.

I don't grow any crucifers because the cabbage loopers are active all summer, and the level of intervention required to combat them is more than I'm willing to take on. I would either need to cover the plants all summer, or spray every two weeks. However, I'm thinking about trying broccoli near the yardlongs next year, to see if the wasps will keep it caterpillar free.
You must log in or register to reply here.
Share:
Facebook Twitter Reddit Pinterest Tumblr WhatsApp Email Share Link