Wednesdays class was fun. Although my youngest member opted out and didn't come with her siblings. She said it was boring. I think the real issue is that the older girls don't play with her at free time, they buddy up and play "rodeo" riding their imaginary horses around while eating their popsicles. She's not a horse lover so she hangs out with the boys.

No Big Fat Word, we just did a review of all of the previous words and I was happy at the retention most of them have.

Our topic of study was edible weeds. "Eat Your Weedies!" That went right over their little heads. Only one boy knew what Wheaties were. Ah, the generation gap...

I chose three of my most common edibles for them to to memorize the identification of. Purslane, lambsquarters, and red root pigweed. Then I took them to the back garden where we have weeds aplenty and told them to find and pull each one. I named one at a time for them to search out and bring to me for ID. This was apparently a pretty hilarious exercise for them, it was done with wild laughter and running around. Who knew weed ID could be so entertaining?

We'll review these three each week until they can pick them out 100% of the time.

They also planted @Nyboy 's Dark Star zucchini, (and one of the older boys knew who Henry Hudson was NYboy!).

The girls planted a small patch of Orchard Baby corn. We may not have enough season left for a crop, but they'll at least get to see it sprout and grow.

So far I'm not impressed with the SBG method. The bales temperatures seem to be around 60 degrees, which may be why I'm not seeing much growth occurring. Our daytime temperatures don't get very high overall and the bales aren't collecting much heat from the sunshine. Bummer. 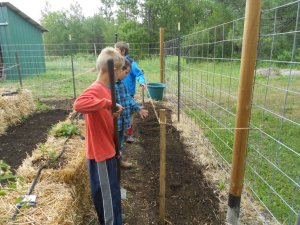 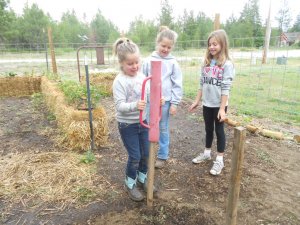 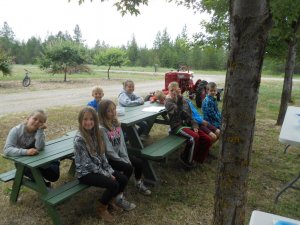 What a fun time. Wish I could be there learning with the kids.

He knew who Henry Hudson was, give him a extra popsicle

Did you all notice how these kids are dressed? It's July for crying out loud and we're in jeans and sweatshirts. It was cool and drizzly for class. They still wanted their popsicles though, even if they turned blue while eating them. Haha.

knowing that your season is short, thought about doing short season corn? might be interesting for next years class.....
http://www.territorialseed.com/product/Earlivee_Corn_Seed

I had not check in for a few weeks. WOW your classes sound like FUN and they are learning cool stuff. !

majorcatfish said:
knowing that your season is short, thought about doing short season corn? might be interesting for next years class.....
http://www.territorialseed.com/product/Earlivee_Corn_Seed
Click to expand...

Hi everybody, I havent popped by in a while Congrats on such an inspiring summer project, again, Kristi! I'm sure you spend a lot of time getting ready and doing these classes, but think how much it means to these kids. Very cool.

Hey Heather! How are you? Miss seeing you around. I suppose you've been camping in your cool new/old trailer?

thistlebloom said:
Did you all notice how these kids are dressed? It's July for crying out loud and we're in jeans and sweatshirts. It was cool and drizzly for class. They still wanted their popsicles though, even if they turned blue while eating them. Haha.
Click to expand...

While you had your class, I was out in the drizzle and fog. It felt like the coast ... in April!

Yesterday, we actually had some rain (maybe a 1/10th of an inch) and I got a little wet. The evening was sunny, still and lovely. In between and despite many heavy dark clouds rolling thru, the lawn dried enuf I could mow. (Lewiston had a record rainfall thru the day with right at 1". No report on Clarkston.)

Today looks fine but may not reach 70°f! The remainder of the week in the 70's! Except that, Thursday may hit 80°. What would @coco25 say

You may want to switch from popsicles to a cup of hot chocolate by Saturday, Thistle'.