I wonder if someone has done a genetic study on mums? Or ANY study on them. Obviously, @Phaedra Geiermann your mum propogation demonstrates a wider diversity of chrysanthemum genetics than I am used to seeing. MUCH different from the pale pale pink pumpkins from my accidental growing this year, which is pretty obviously cross pollination with some white baby boo's.
Your mums are beautiful, and you inspired me to buy a new jar of rooting hormone.

Pulsegleaner said:
We actually had a pretty poor haul with finding mums this year, same as the corn. We saw plenty, but most were quite boring. We only managed to actually buy ONE new plant (a sort of daisy like mum, with yellow petals and a sort of bronzy disc in the center).

There WERE two others that might have made the cut, but both ultimately didn't. There was a REALLY nice red-centered yellow I saw at one place, but, as it was in a hanging basket, it was about $20, which Dad said was too expensive for a mum. And when I convinced him otherwise and we went back, it was already sold.

The other one (which I saw on the trip we made to buy the yellow and red one) was an INCREDIBLY deep shade of purple. Unfortunately, it was also the scraggliest looking mum I have ever seen, both in terms of the plant (it looked more like a thicket of sticks than a healthy plant) and in the flowers (which, besides being button sized, were almost completely made up of closed disc flowers, with only a few odd rays here and there along the edges. It looked more like a New England aster of some sort than a chrysanthemum.) So we passed on it.
Click to expand...

may have been able to rescue it and if you offered a lower price for it since it was in poor condition you could have had a bargain for the following season, but you never know how hardy that might have been... hard call... 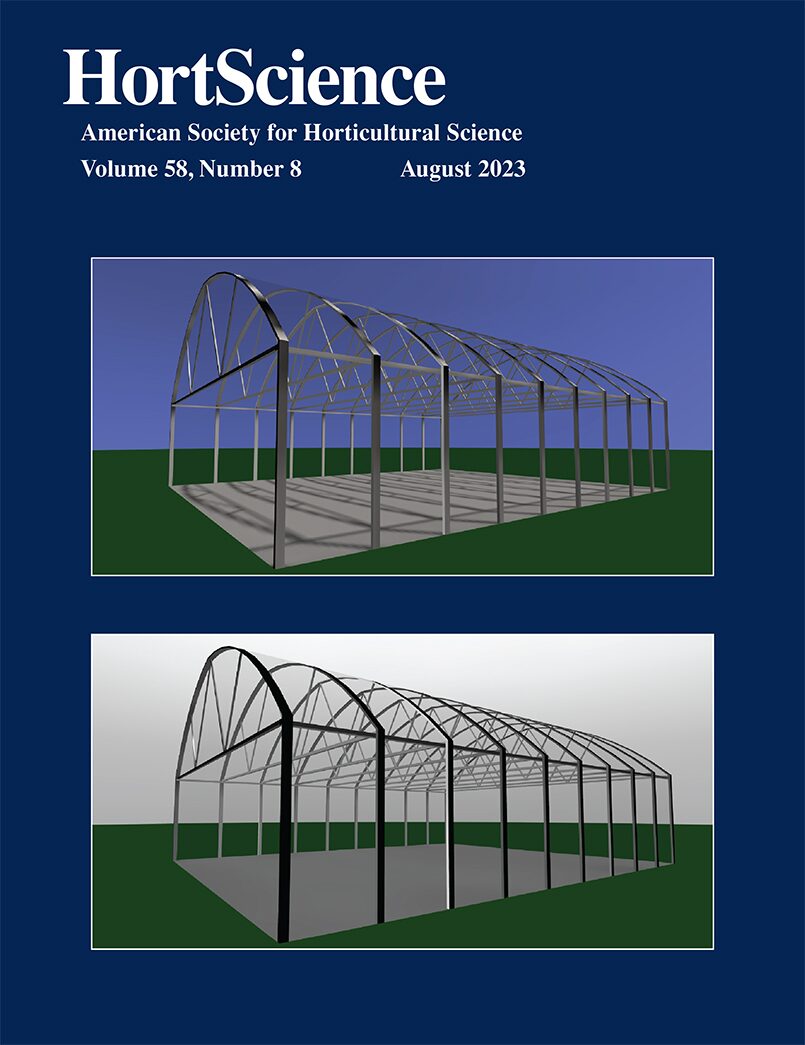 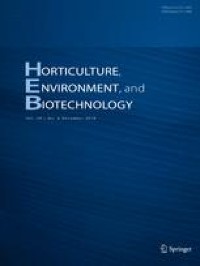 Application of next-generation sequencing to very large genomes, such as chrysanthemum (Chrysanthemum sp.), faces challenges including repeated sequences, limited short-reads, and various contigs in massive fragments. Genotyping-by-sequencing (GBS) can overcome many of these drawbacks by...

flowerbug said:
may have been able to rescue it and if you offered a lower price for it since it was in poor condition you could have had a bargain for the following season, but you never know how hardy that might have been... hard call...
Click to expand...

This was at Balducci's. there was NO WAY they would have given us a lower price.

And I didn't mean it looked like a bunch of sticks because it was dying, the stems and flowers were perfectly healthy. That LITERALLY just the way that particular type grew. It's a matter of its genetics, not its treatment. It'd look like it was about to keep over no matter WHAT.

Disbudding isn't too much bother, if you want to do it.

Think of it this way: If you don't disbud the lateral buds, you will want to deadhead them off after they bloom and begin to die. Do job early or do it later. So, it is 6 to one, a half-dozen to the other.

(That's some English nonsense for you, Phaedra )
Click to expand...

Well, Steve, you are right, and I don't need to wait until next year to see how disbudding can help. I have another plant (also Chrysanthemum × morifolium, larger flower variety) that I transplanted outside the greenhouse with bottomless planter. 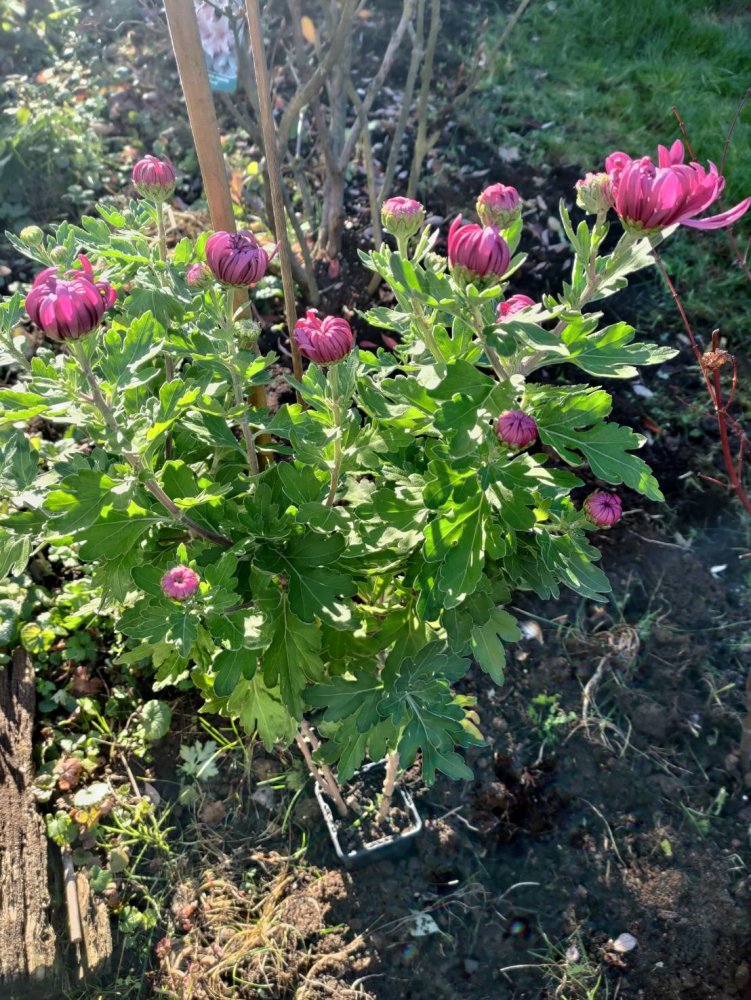 I said "bottomless planter," but it's, in fact, a 9cm nursery pot that I cut the bottom part. For me, it's a similar concept to a raised bed. As this one is a hardy variety, I removed the entire container away this morning and covered the plant with homemade compost. 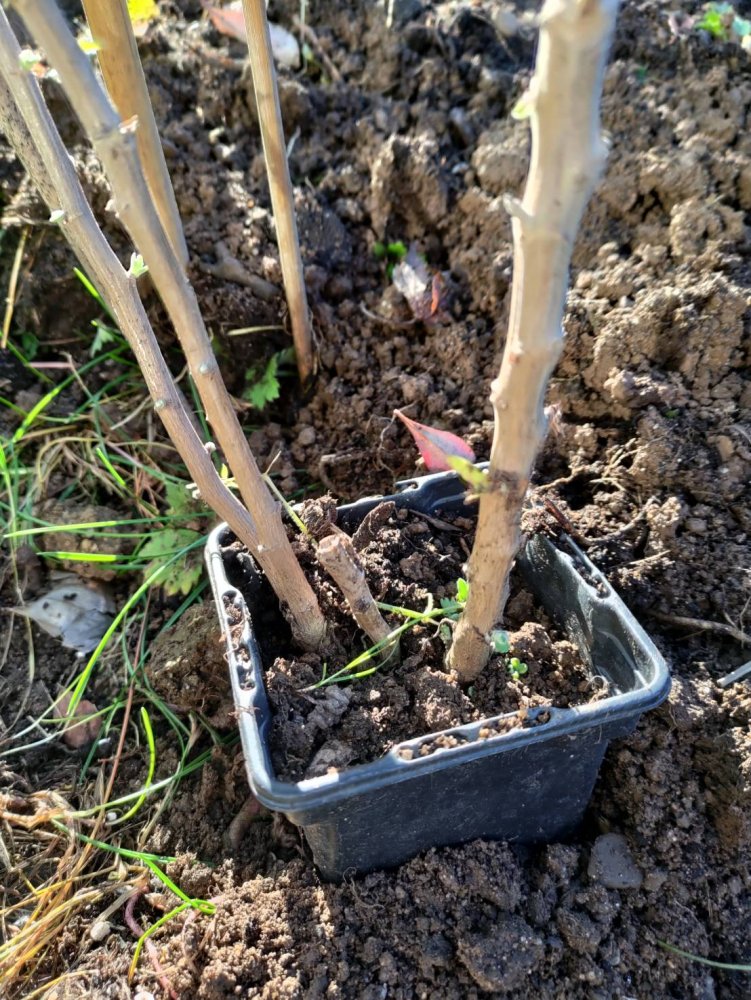 A lot of buds 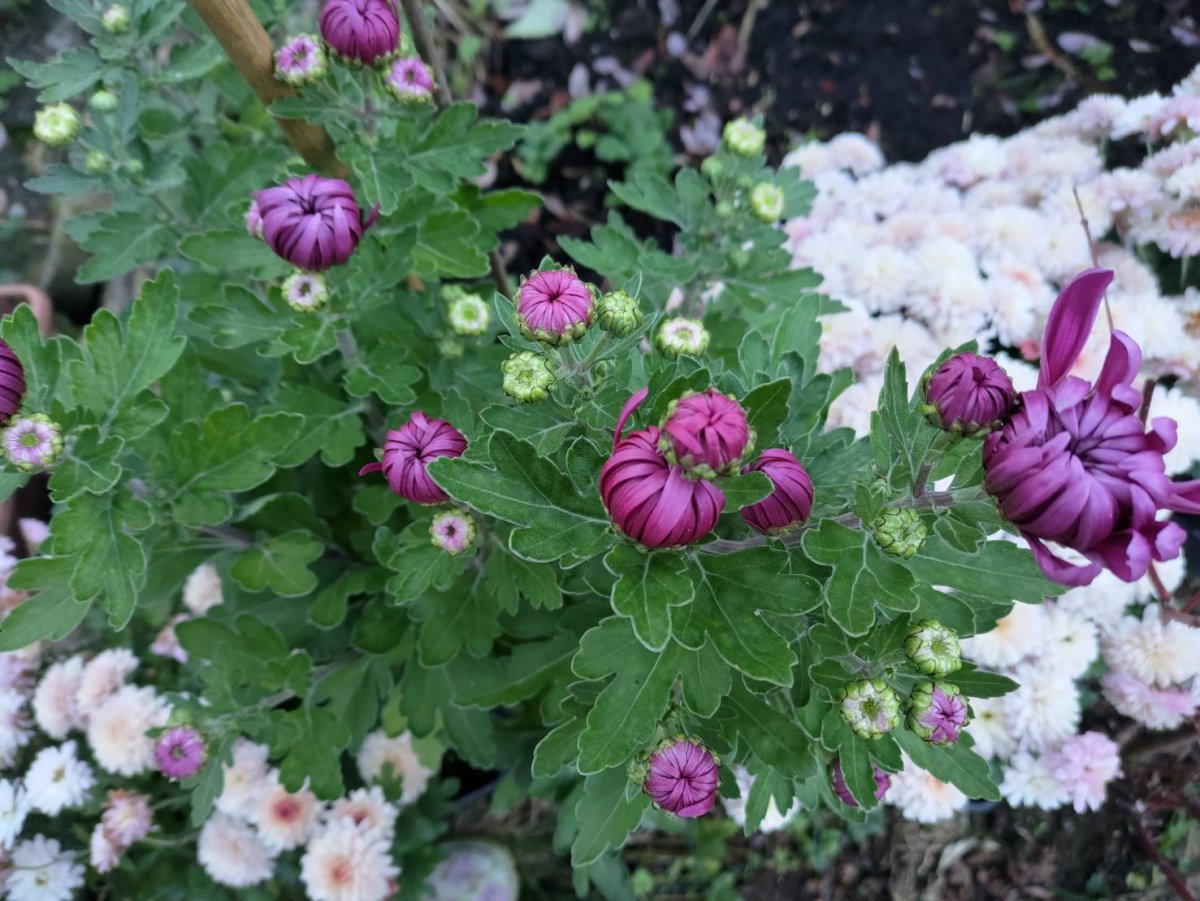 I also learned that usually, besides the apical bud, a secondary bud from the lower lateral will be kept as a backup (in case the apical bud is damaged). The rest of the buds should be removed before they are longer than 2cm.

After the apical bud starts showing colors, the secondary one can be removed, too. 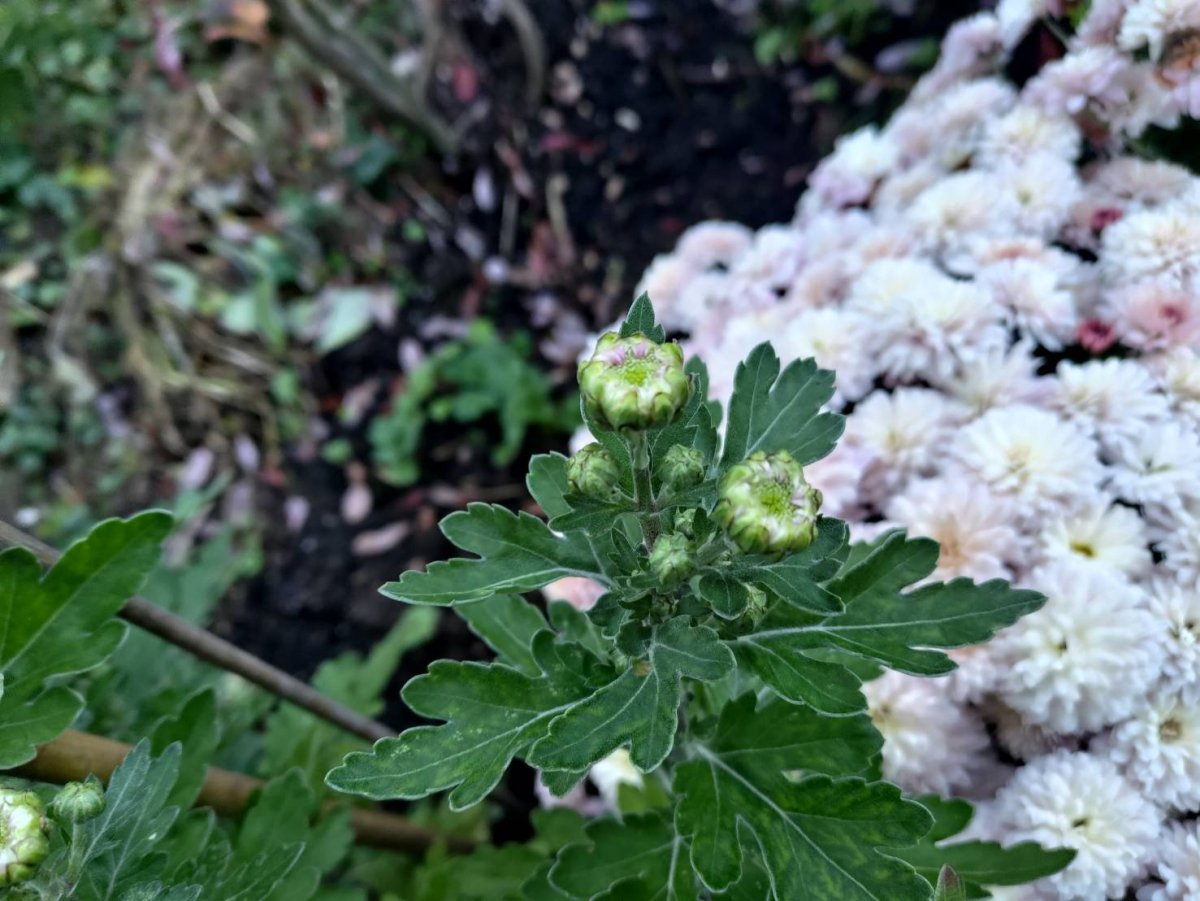 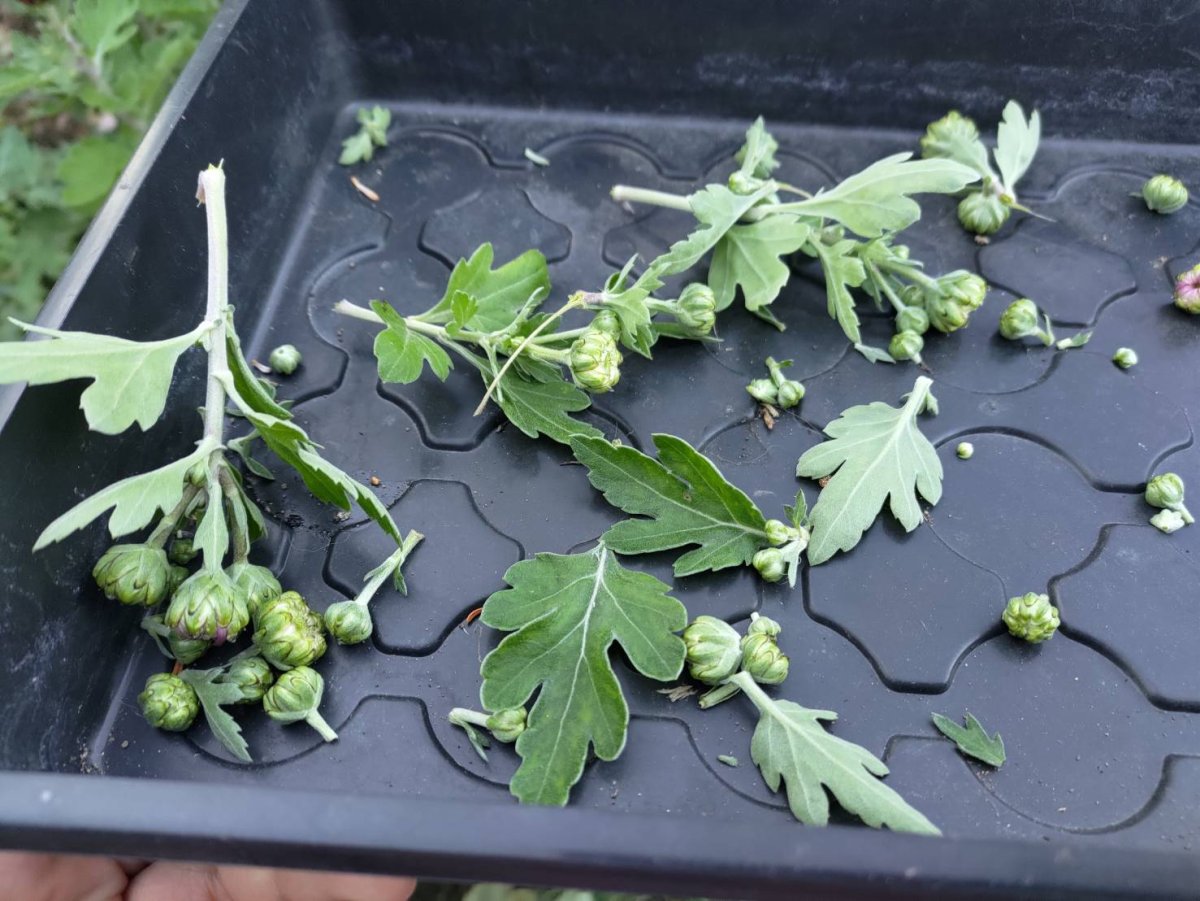 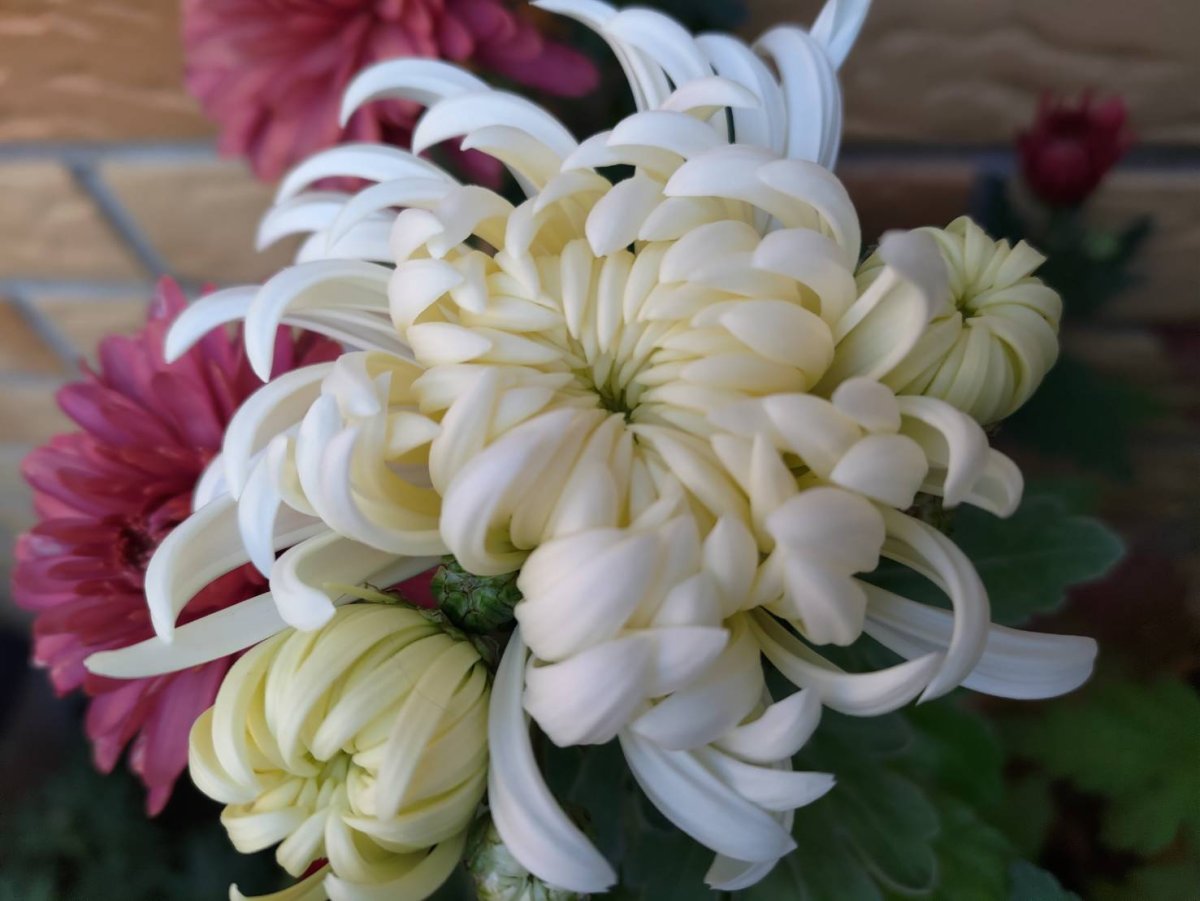 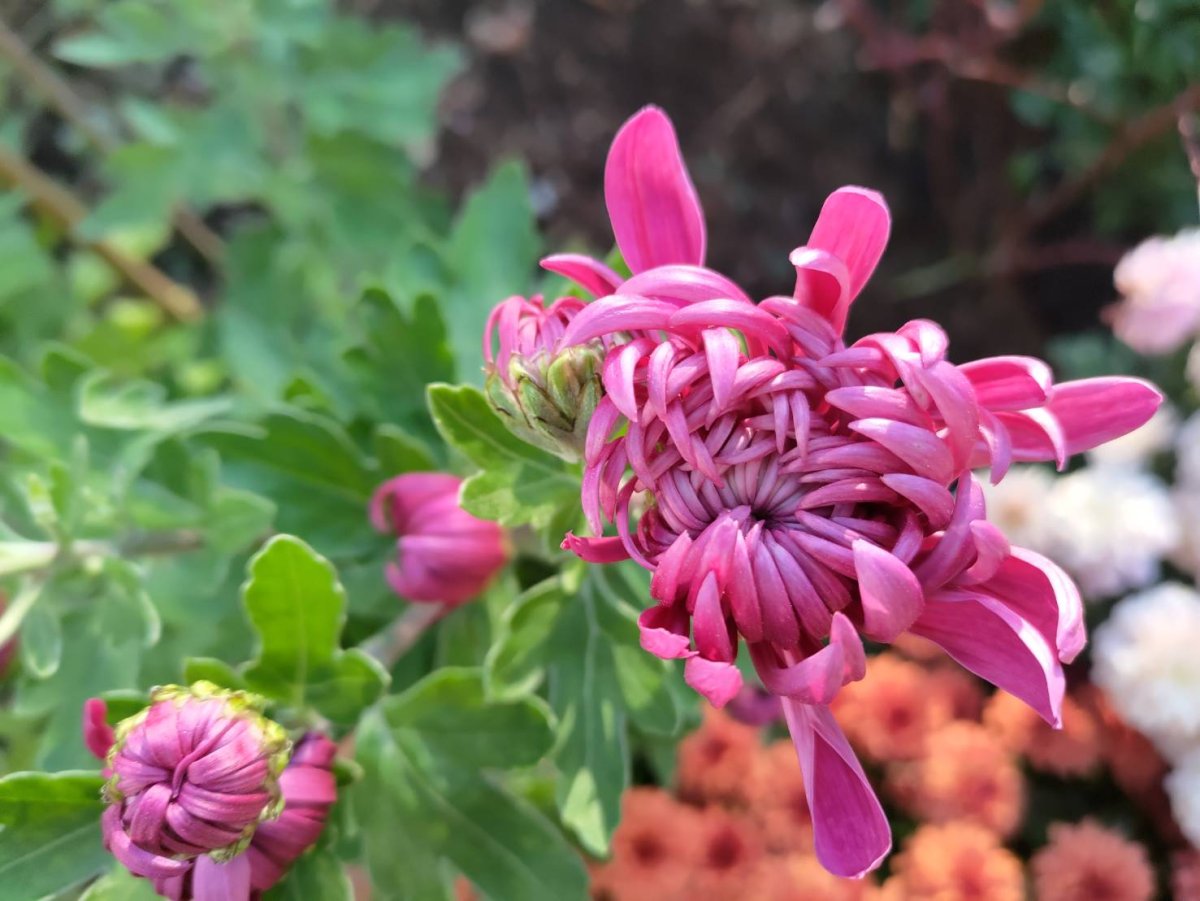 I also finished some not-so-romantic works earlier today - deadheading. Compared with the two plants growing in the greenhouse, flowers from those potted ones that stayed in the garden have a much shorter life - majorly because of the moisture. As the flowers are so compacted, moisture is difficult to escape, and the ventilation is also poor. 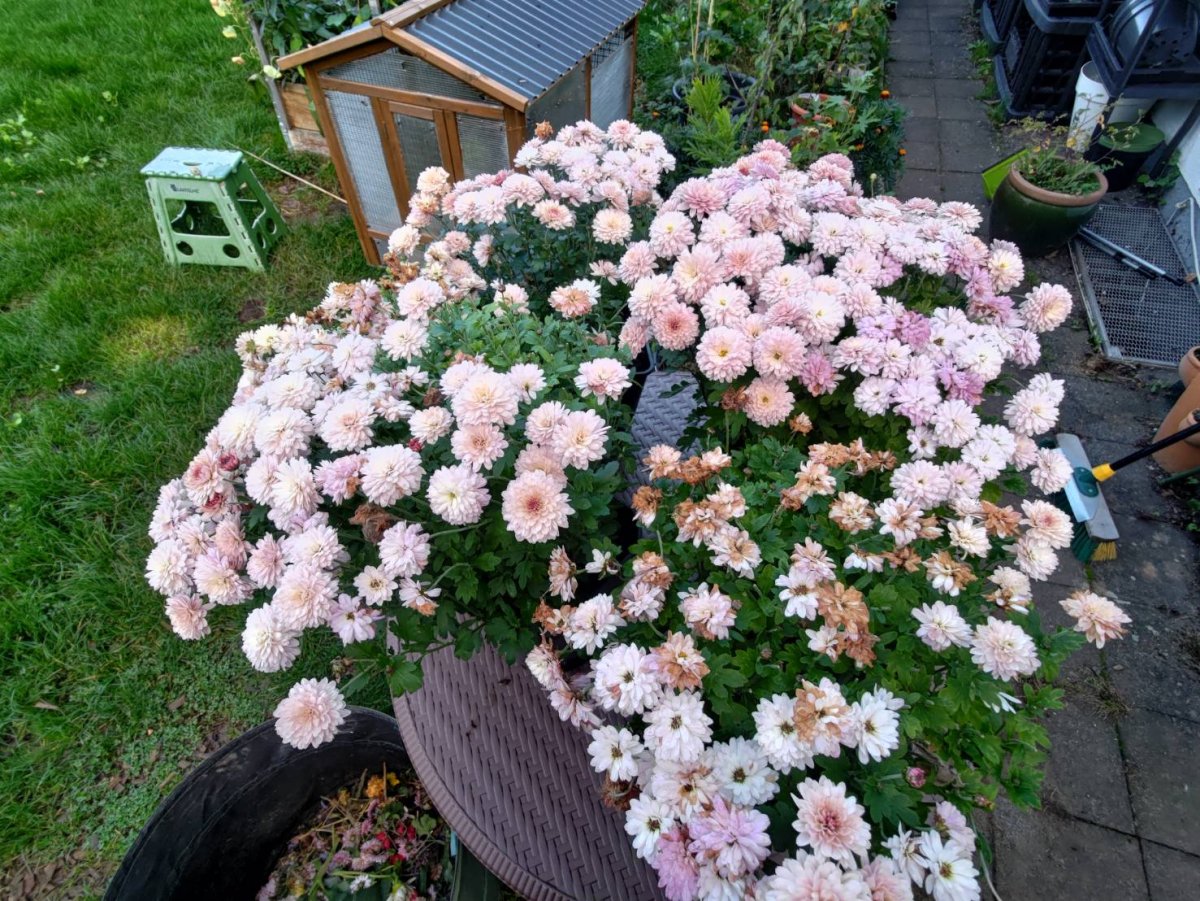 They look nice from a distance. 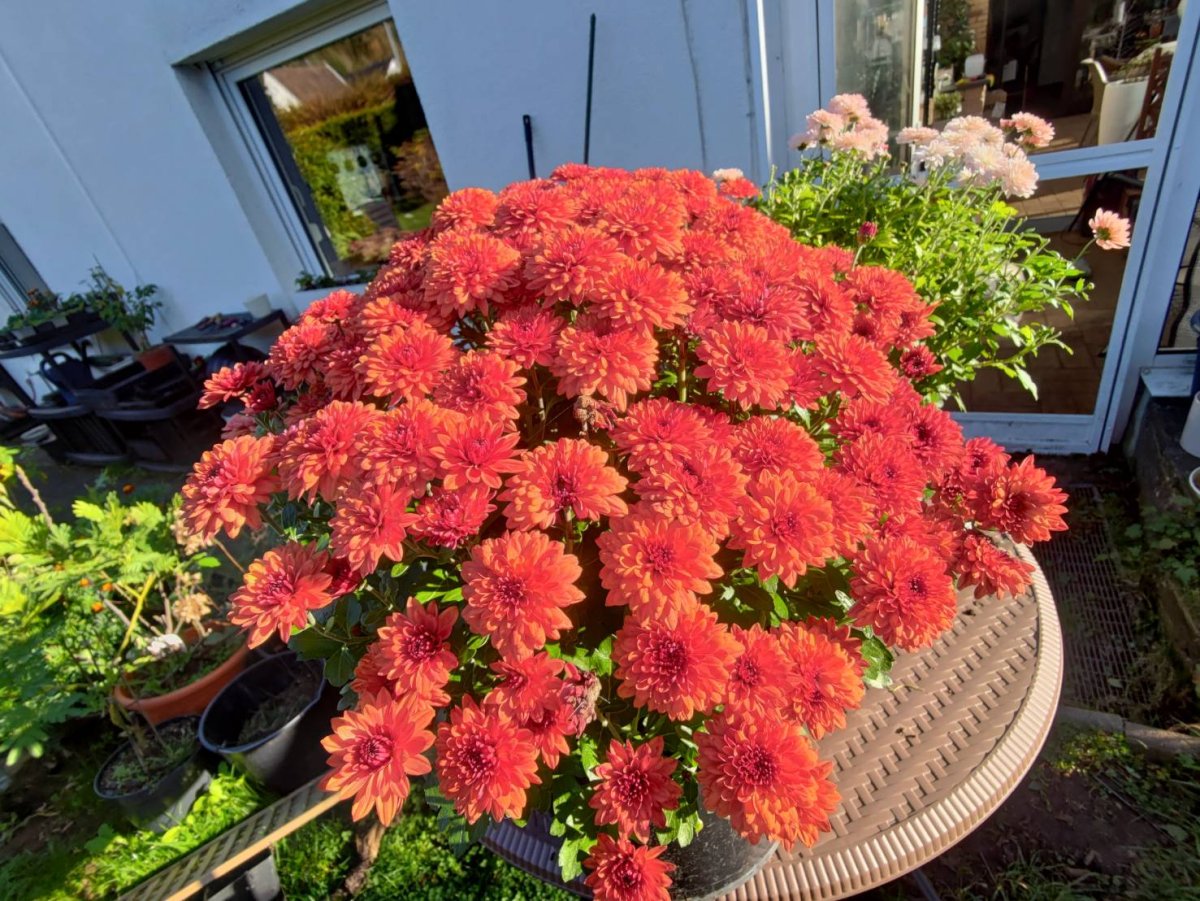 But some should have been removed. 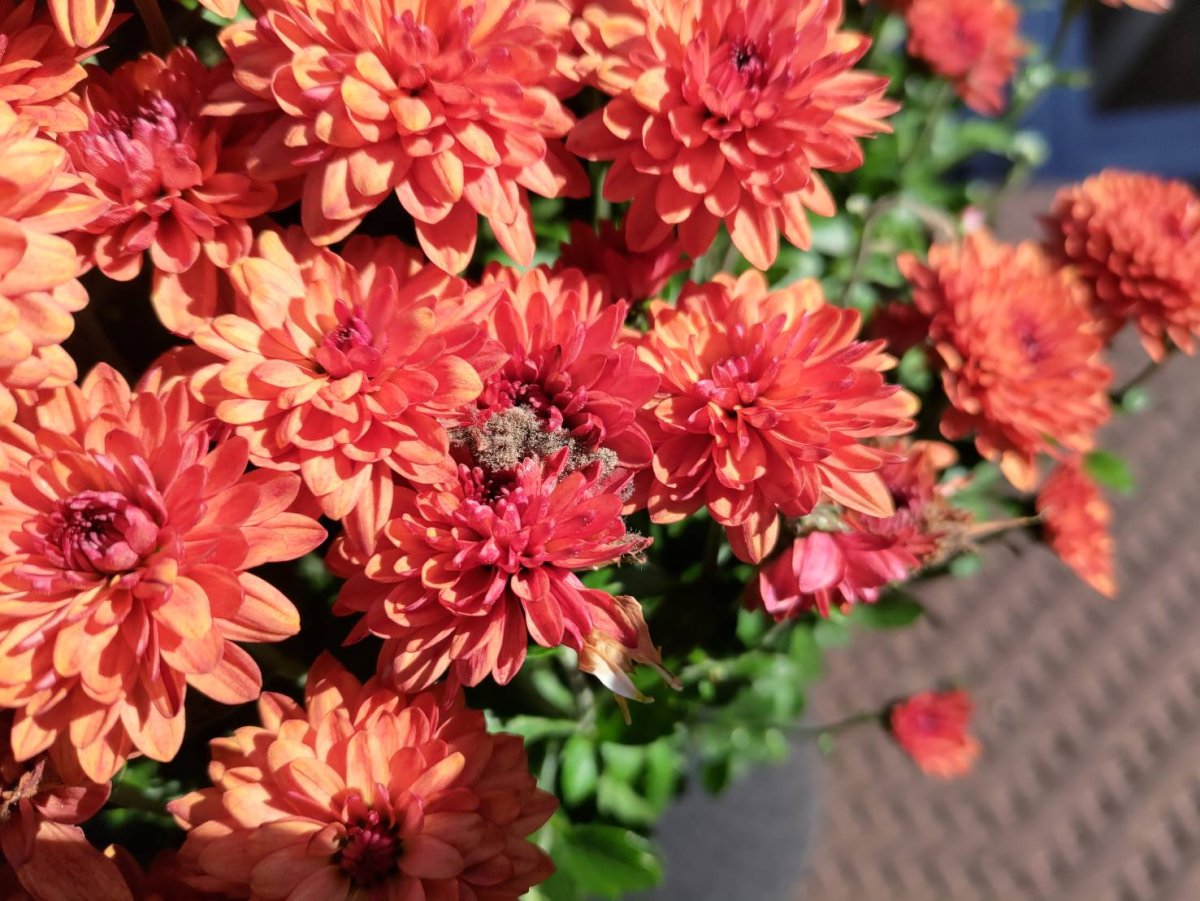 Here are the mother plants (which have stayed in the greenhouse since last autumn). 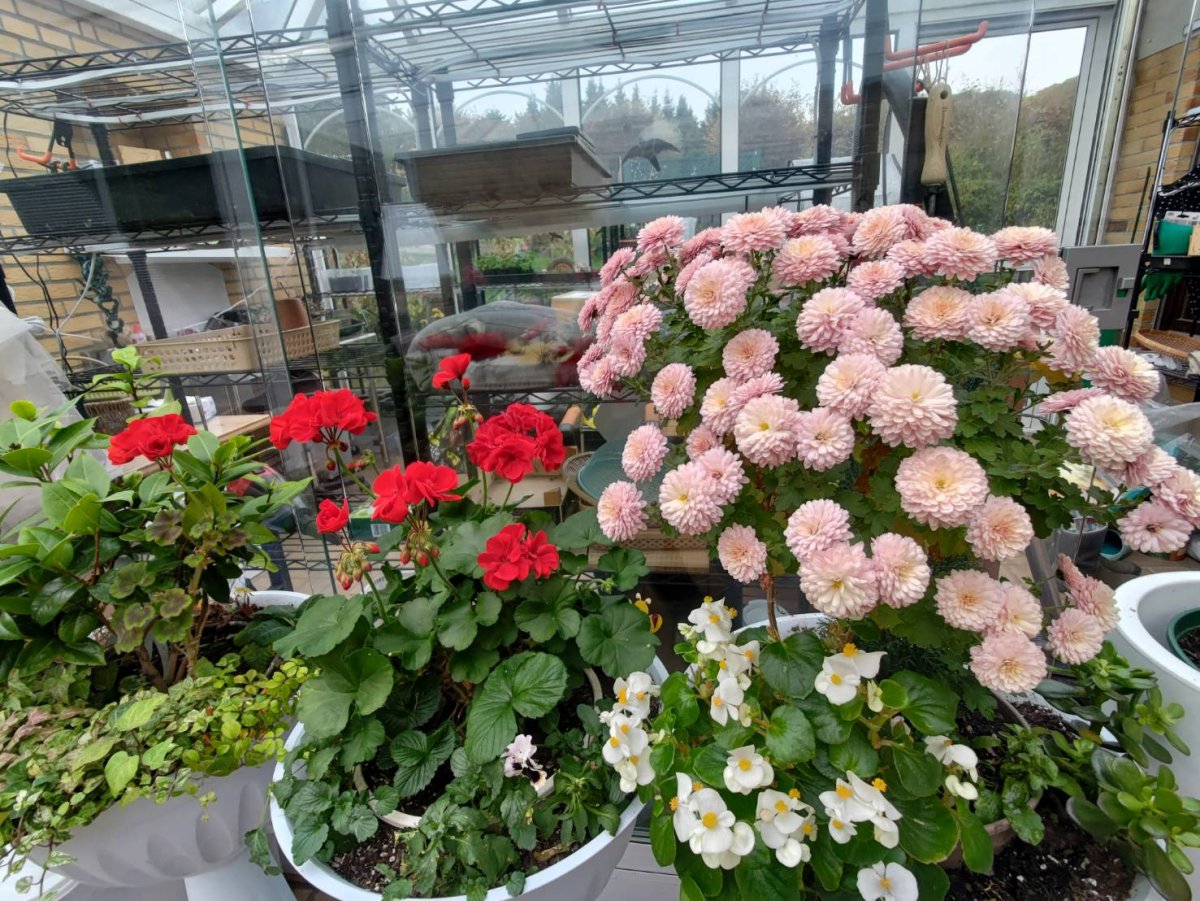 Another thing I have learned recently is those MUMs should be cut back several times. Quite interesting; it's another universe.

Wow, a professional MUM nursery
Unfortunately, it's in the UK, and after Brexit, it's much more difficult to get good things from there. However, this inspires me to seek alternatives from our neighbor, the Netherlands, which is also reputational for any kind of flower supply. 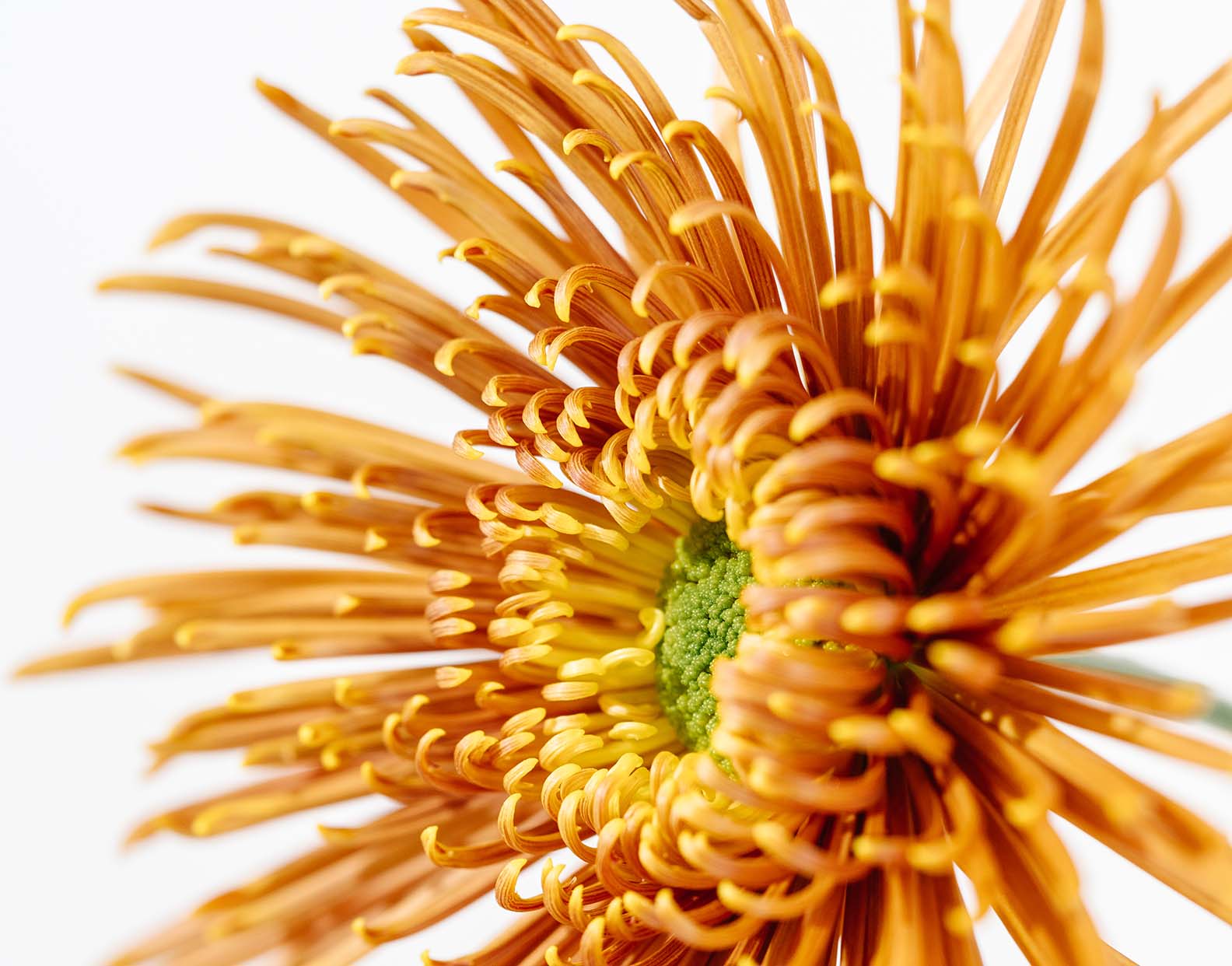 Did you know disbuds and poms are actually both chrysanthemums? The difference is in how the plants are managed! Read on to learn more.

Fascinating article!
Do the spider or cremon or esfera ever cross pollinate?

Phaedra Geiermann said:
I said "bottomless planter," but it's, in fact, a 9cm nursery pot that I cut the bottom part. For me, it's a similar concept to a raised bed.
Click to expand...

Somewhat of a similar idea, at least, to me !


P Suckling said:
... I make compost in situ on the garden beds in drum type containers open at the base. As I pull these off a few months after filling, I am left with mounds of compost that eventually gets spread over the beds. Anything growing next to the compost 'daleks' grows much more strongly and lush because of nutrient run off.
Click to expand...

@P Suckling 's 'dalek' composting drum is a bottomless plastic one. My backyard potted tomatoes send roots right through and into the soil. It's one thing that I count on happening but it would also make sense to remove the bottom entirely.

Personally, I can imagine that my "stealth" below ground and decks composting would work just fine using P Suckling's process. Above ground here has to be in some sort of container that limits air exposure. Otherwise, in my gardening environment, the material may do little more than dry out.