Rhodie Ranch said:
Our county opens tomorrow, altho some business have jumped the gun today. I'm still gonna wear my mask and use my hand sanitizer though. We only had 50 cases and no deaths, but I'm staying on top of my toes regardless.
Click to expand...

Yeah, between the 14th and 15th we jumped up 500+ cases. Its gonna accelerate now. Stay calm and keep a towel handy.

There's going to be a numbers jump in many areas, now that testing is becoming more widespread. Some of the counties in my local area have just now begun testing anyone who wants to be tested, symptomatic or not. That gives a false impression that more people are getting infected; but the reality is that those who were already infected are only now being counted.

The only numbers we should be looking at are deaths that are directly due to confirmed coronavirus infections. As of now, you die, coronavirus casualty. The number we will never know is the number of healthy people who contacted it and subsequently died. In my county, the only death was an obese man with heart and lung problems. Ie, a dead man walking. Common cold would doom him. Are we now going to shut down the country over colds and flus?

16 deaths out of a population of 23,000 here as of yesterday. I'll not quote number of cases. We haven't had enough reliable testing for number of cases to mean anything.

Seed, have you looked at how they count flu deaths? You were really harping on flu deaths earlier. For some reason you seem to have stopped quoting those. Of course there are inaccuracies in the coronavirus count, we didn't have tests for a lot of them. From what I've seen the coronavirus count should be more accurate than the flu count.

The flu, this virus, and many diseases mainly kill people with pre-existing conditions. Not totally but mainly. Many pretty healthy people have spent a lot of time in the hospital getting treatment. And being really sick, even if they did not die from it. Good thing for them we were able to cut the number of case so they could get treatment instead of stacking them up like cordwood to die. Think what a mental toll that would have taken on the people trying to care for them, let alone the patient's family members.

We seem to have different perspectives on this. I don't want to put words in your mouth, but to me even if someone has pre-existing conditions their lives are still valuable. For example, if my sister-in-law catches this virus she will probably die. Even with her pre-existing conditions she is greatly loved by her kids and grandkids and teaching them a lot. To me it's not some "they" out there, it's people I know and care about that are threatened.

I’ve quit “harping” because all here know the data. What they prefer to do with it is their business. We all have different opinions. I live with a wife who is immune suppressed thus has to take precautions. I’m-according to CDC-a high risk-male, blood type A, and over 65.
Those that are “high risk” need to take whatever precautions they deem necessary. Those that prefer to live their life, need to be allowed that option.
People have always gotten really sick from many virus’s or bacteria. “Many” is a subjective term. We have NO reliable data to back up any theories. That they would die “so that we stack them like cord wood” is an opinion with no data as is my opinion that “some would die but most, at worst, get sick and life goes on”. How does anyone explain that the vast majority of positive cases never even knew they were sick? I would agree that “people at risk” need to segregate themselves-which before they were not doing. They needed to be alerted and were. I do not devalue anyone’s life but I also will not shut down a country because some are at risk.
The crime would be, IF known, for the people (CDC, politicians, medical advisors, news people) to with hold needed info.

PS. My wife can just as easily be killed from a flu, bad cold as this virus. Believe that is true for most, if not all, suppressed immune people.
Last edited: May 15, 2020 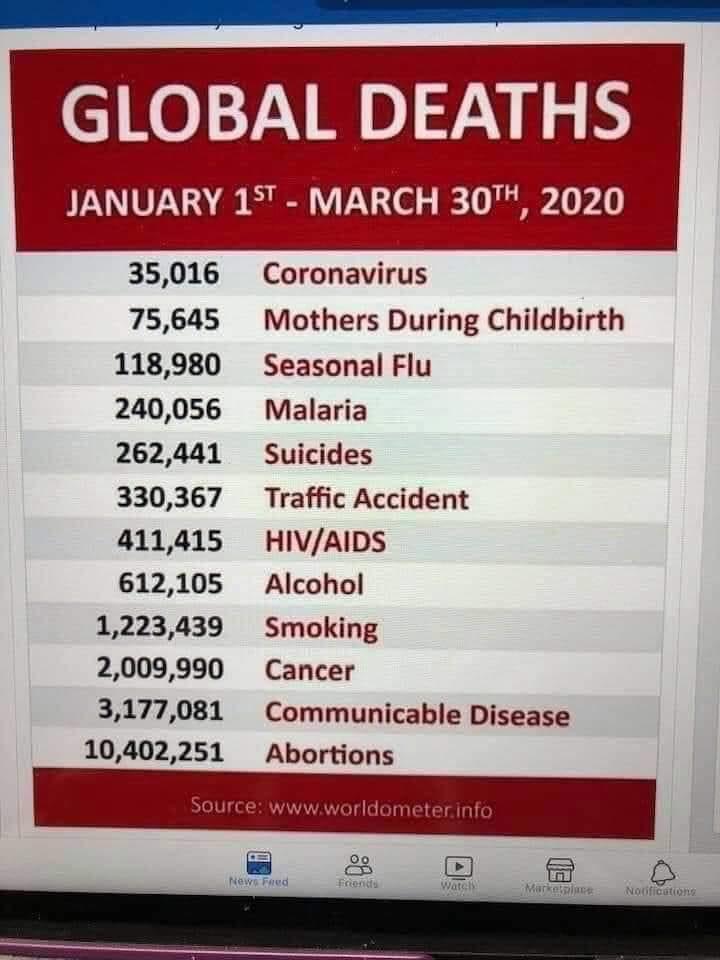 Are these factual numbers?

Numbers. Don't we LOVE numbers!
Www.worldometer.info (where @seedcorn 's chart came from), now has coronavirus deaths (in the USA) at 88,000. As of May 15, the CDC has the number at just over 60,000. Does anyone really know? People get numbers, play with them to develop statistics that suit their on agenda, and those with a similar agenda propagate them.
The worldometer chart offers some interesting numbers which could be meaningless or downright confusing. Communicable disease deaths (over 3 million)....isn't Covid 19 a communicable disease? Seasonal flu? HIV? Were these lumped into the "communicable disease" category?
Covid 19 is definitely a serious infection in its own right, and one that should be treated with respect, but what does it really DO? Look at the worldometer chart again. Except for traumatic deaths (childbirth, traffic accidents, suicides) how many of these categories are "standalones"? Most are "contributing factors". Alcohol (except for rare instances of alcohol poisoning by over ingesting) isn't a cause of death. It may be a causative factor in other illnesses, but not a cause, per se. Likewise, tobacco use. Contributes to, or causes many other death inducing illnesses. But doesn't kill in its own right.
If a cigarette smoking, heavy drinking, obese person with hypertension, diabetes, impaired lung function person contracts Covid 19 and succumbs, what did they die from?
I will avoid adding to the "numbers". Look it up for yourself. But what age groups are most prone to dying from (supposedly) Covid 19? Nursing home (assisted living, etc...call them what you will) residents are high on the list of people passing from this disease. Really? If one is a nursing home resident, you are probably teetering on the edge already. Nobody goes there because they're bored living in their own home. A sudden onset of hangnail could push them over the edge (silly comparison, but you get the idea).
Let's face it. Older people are more prone to developing illnesses, which cumulatively make us more likely to succumb than younger people. It's called life. It happens. We die.
If this were the plague, you catch it (9 or 90) you die, then panic. But just another infection that, combined with the myriad vagaries of living, contribute to our end of life? Panic? I don't think so, Tim.
It's life. Live it. Death? Gonna happen anyhow, don't run from it.
As Shakespeare said: "A coward dies a thousands times before his death, but the valiant taste of death but once. It seems to me most strange that men should fear, seeing that death, a necessary end, will come when it will come."

Thanks as I had no idea where it came from-friend posted it. I assumed we lost 250,000 in USA alone as some said we would 8 weeks ago. They are conveniently absent in these threads as one wished I’d get it and die....
You must log in or register to reply here.
Share:
Facebook Twitter Reddit Pinterest Tumblr WhatsApp Email Link