I'd also like to know a bit more about the

canesisters said:
This thread got me curious so I googled "CDC - deaths attributed to home canning in 2018" and found this article

excerpt:
Events
In the contiguous states and Hawaii, 102 foodborne botulism events occurred, which affected 160 persons; a median of 9 events (range 4–13) and 14 cases (range 4–30) took place per year. The median number of cases per event was 1 (range 1–17). The median age of case-patients in the contiguous states was 50 years (range 4–88 years), and 83 (52%) were female. The overall case-fatality rate was 5%. No clear seasonal pattern was observed.


I thought it was interesting that Alaska was given it's own section while Hawaii was included in the rest of the country.
Click to expand...

This made me curious so I looked it up. Alaska has the highest rates of botulism in the US, due to their traditional fermented foods. I vaguely recall watching a documentary where it turned out the sanitary method of fermenting is what spiked the rates so high, and the government recommended going back to putting food in a hole in the ground. They do recommend that:

but I'll have to check and find the documentary and watch it again now that I'm interested.

digitS' said:
The art of the dill !

I am not worried about my pickling at all. I have not used my pressure canner for any of it, just hot water bathing and every jar that I open is good. You can tell IMMEDIATELY when you open up a jar that has been sitting on the pantry shelf for more than 6 months if it has gone bad. Sometimes, if you pickled weeks before and didn't do it right, it can go bad and you won't be able to tell. If you can correctly and check your lids your produce can last a long time.
I just made an apple pie from a quart of apple pie filling from 2013. Only one piece left.
I hot water bathed squash one year and I could see it going bad in the jars 5 months later. Takes awhile.
I would not reuse the pickling juice. You find your favorite recipes and they may not be the same as the manufacturer used, And the manufacturer may have added extra salt and maybe MSG to keep the product from going bad. The reason I pickle is so that my DH doesn't consume extra salt.
I boil my brine usually in a crock pot so that I am not running around the kitchen. It cooks early and lets me prep everything else while the brine waits.
I have pickled beets with straight vinegar before.

I had to rinse them off several times before reheating. If I haven't tried my pressure canner before, a good beet crop will force me to do so. I love canned beets and I am tired of the pickled ones.
I often boil my jars 10-15 minutes more than the recipe asks for bc I want nice, firm lids and I don't always have the time to reheat them if they don't seal.
Over the last 15 years or so I have had 5 jars go bad. I probably own close to 200 canning jars, btw, what with taking "orphan" jars from people who don't use them.
FYI, be Fastidious about keeping your jars clean!!! I wash mine with soap and water and then run them through the dishwasher. After they are clean and dry I put a brand new lid and screw top. I have started to pull the screw tops from the jars that will be emptied, like tomatoes bc I generally use the whole jar when I open them. I have started washing my finished jars with soap and water if I think that some of the product may have leaked into the water. If you can this will happen sometimes, even if you boil your lids and put them on boiling hot jars with product.
Sometime I reuse a lid and I write "used" on it with a Sharpie. Sometimes I will use a jar for short time refridgerator storage and you can see what it is the jar that way.
I even keep my coffee beans in quart jars and I found colorful solid clearance lids for jars that don't need to be sealed. Two of my jars are old glass Ovaltine jars with an orange and a yellow lid. Two of my coffee bean jars were from grocery store fruit jars that don't quite seal correctly when I have tried using them to can.
Last edited: Jan 30, 2019

Crealcritter said:
By posting my pickle ferment post, I feel I did something wrong... Should I delete it?
Click to expand...

no, why? that style of fermented pickles are usually ok, the brine selects for the lactobacillus bacteria which then makes the pickles acidic. this is the same method many vegetables are fermented naturally (including saurkraut). the problem happens if you are doing things that are not acidic and that is where people get into trouble. still it does happen that some batches do not work out because the wrong type of bacteria get going or a fungi... i've never made naturally fermented pickles here. we just get way too many cucumbers for that to be practical unless we had a place to keep a large crock and we don't...

AMKuska said:
This is an absolutely fascinating discussion. Does anyone have an example of what molds or bacteria can survive boiling? Besides botulism of course.
Click to expand...

googling "thermophilic bacteria and fungi" will get you many fun readings... luckily most of them are not a common cause of human diseases because we don't dwell near thermal vents in the oceans or other hot places like fermenting piles of compost and the like.

ducks4you said:
I am not worried about my pickling at all. I have not used my pressure canner for any of it, just hot water bathing and every jar that I open is good. You can tell IMMEDIATELY when you open up a jar that has been sitting on the pantry shelf for more than 6 months if it has gone bad. Sometimes, if you pickled weeks before and didn't do it right, it can go bad and you won't be able to tell. If you can correctly and check your lids your produce can last a long time.
....
Click to expand...

you cannot smell or detect botulism from looking at something. that is why it is so dangerous.

Very interesting thread. I have made a spicy sweet pickle, my great grandmother's recipe, since I was in high school. Best pickles ever! I posted the recipe here on TEG, @canesisters uses that same recipe now for her pickles. I can't imagine a hamburger without them!

Here is a link to the recipe

Ridgerunner said:
Absolutely not. It fits right in. I've made saurkraut using that method, then hot water bath canned it.

Here is the fermenting crock i used.

I live for homemade fermented kraut, it's like candy to me. I make at least a 5 gallon batch every season. Fall cabbages seem to be better than spring cabbages.
C

Ok back to fermented pickles. After about 2 weeks of ferment they are half sours, some people like 1/2 sours but I like full sours.

Here's what you could expect after about 2 weeks ferment. 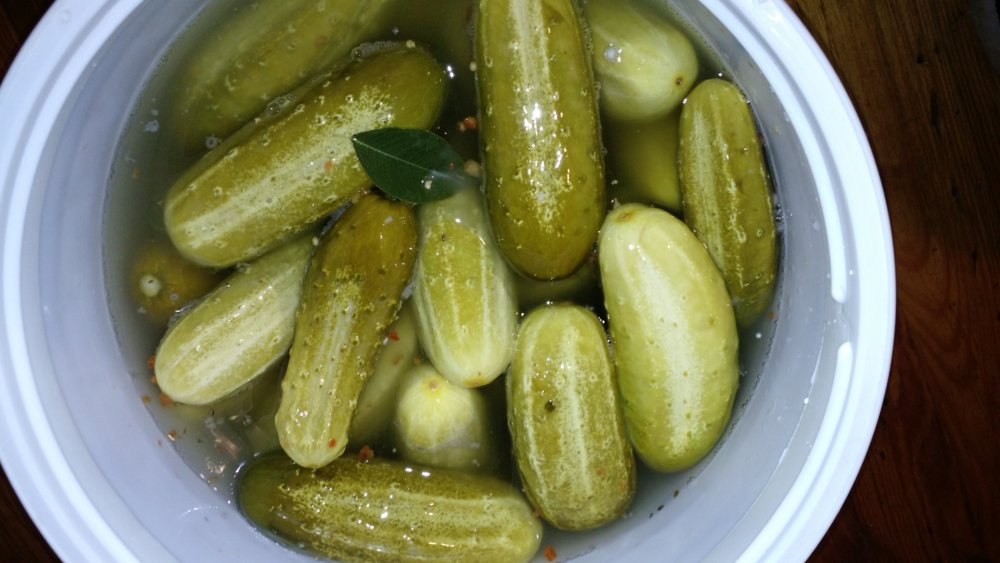 Of course the best part is taste testing 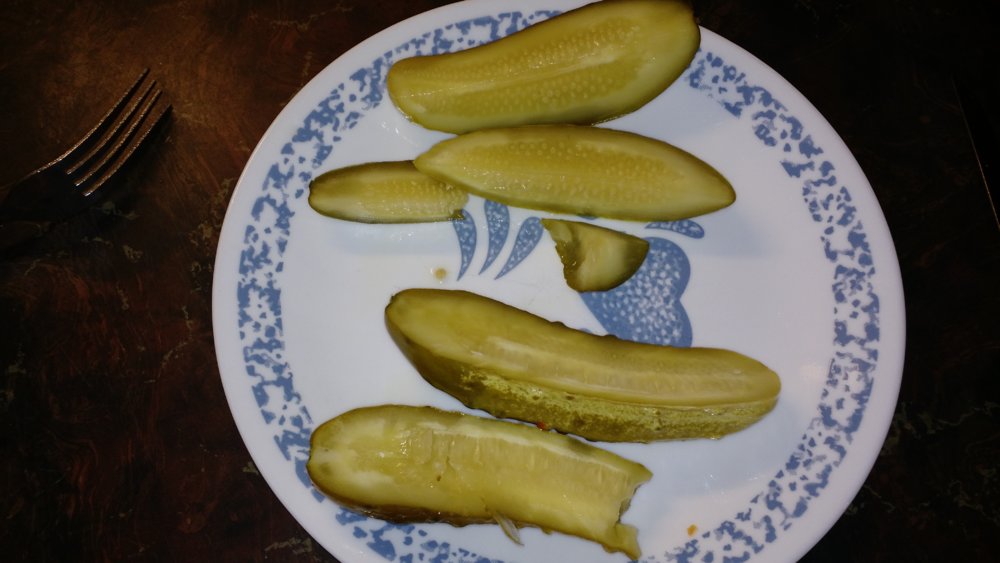 Back under the brine for a few more weeks 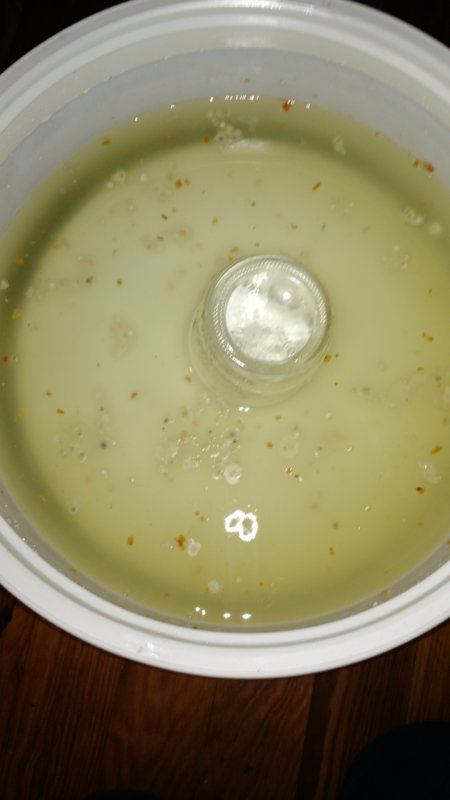 After about 5 to 6 weeks of ferment they are fully sour. Here's what they look like went fully done. Good and sour and crunchy. 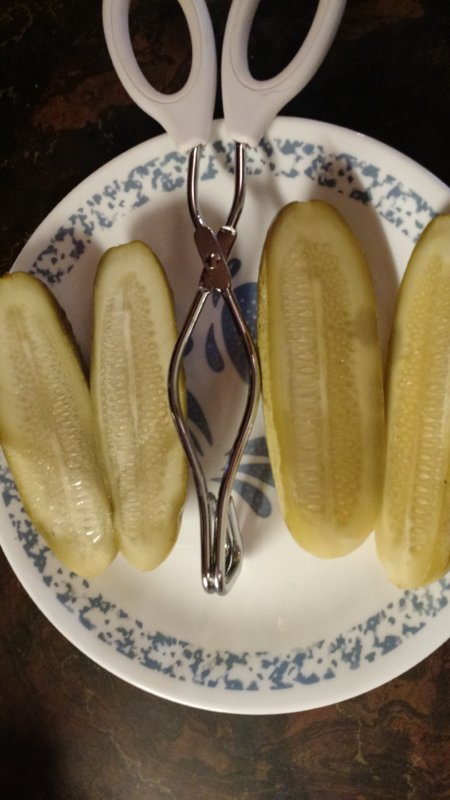 I then can them along with the brine into 1/2 gallon jars. The hot garlic sours dills get a red habenero added to the jar. 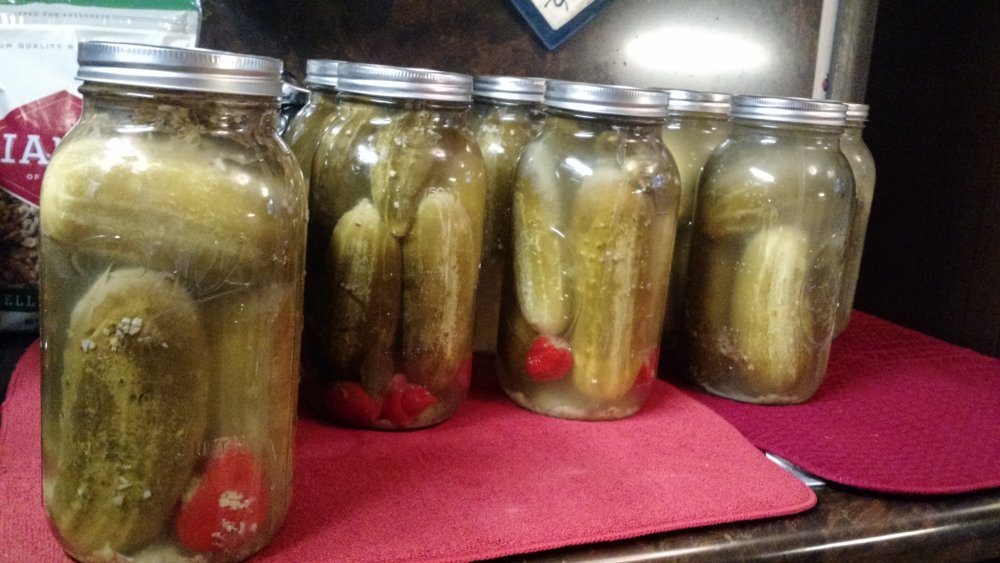 You may notice the brine is very cloudy. That's good for you lactic acid bacteria
- they are really delicious 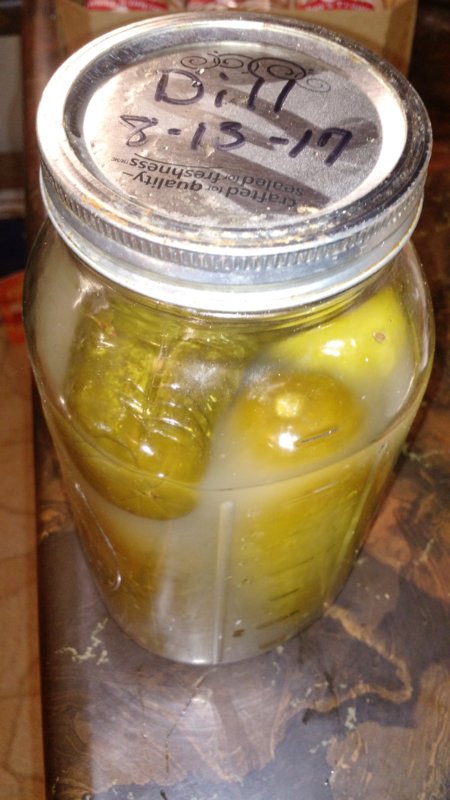