@seedtrader-teg Could it be Gooseneck Loosestrife?

I looked the name up, and I believe it is! Thanks! It's great to know what they are again!

They draw the most pollinators of different kinds in, from irredescent flies, black wasps, butterfies, bumble bees, it is just inundated with little fliers!

It grows, in "bad" sandy soil, with no attention or maintenance at all.

It's great for bank erosion control, which is why I got it long ago.

This bunch is at least 20+ years old.

They transplant well, just yanked up, stuffed in a hole, and watered for a week.

I really love having it around. It seems to do well in full sun, to partial shade.

The world would look amazing, if it were used on more embankments and "no man's lands".

Bushel Basket Gourd blooms. Came up from a volunteer too. They're about 3" in width. I spotted them as I went out to turn on the chickens' electric fence this evening. 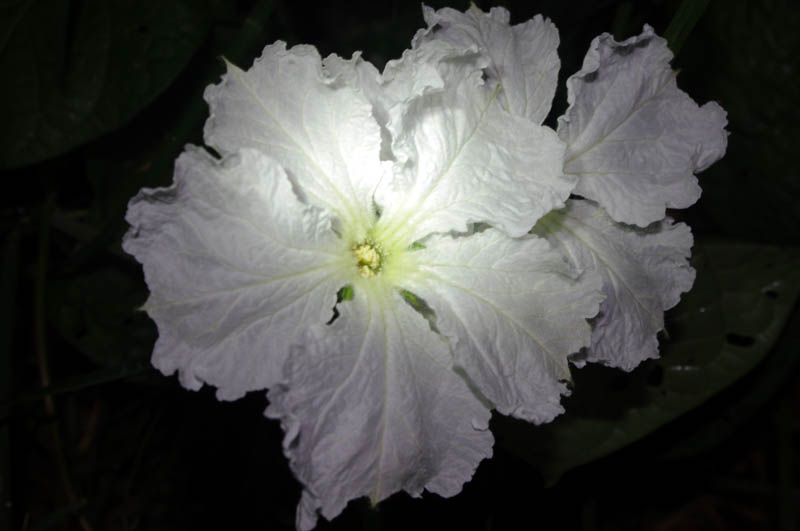 @seedtrader-teg, how does your gooseneck loosestrife do at keeping the weeds down around it? I have an embankment that is too steep to mow and very rough from varmints digging homes in it every year. It is also the only (I think) place with PI left on the property. I'd love to have all the weeds, briars, and tree starts out of there and a healthy, colorful cover planted on it.

I'll have this clover now... no wait! That one looks better.

Be careful of Loosestrife,some of them can be very invasive !! Red I can give you seeds from purple. In marsh area spreads like crazy, might be better behave in drier place.

Purple loosestrife is considered an invasive here in south-est, central-est Wisconsin. I thought perhaps the gooseneck would be different.

Thanks, Nyboy, but I can collect all the seeds I want of the purple stuff.

@Smart Red I had a patch of the gooseneck, it spread a little. Was much better behaved than the purple. It is gone now as DH parks camper there.

Thank you, Carol, that's good to know. I will check it out more before planting that much anyway.

Smart Red said:
@seedtrader-teg, how does your gooseneck loosestrife do at keeping the weeds down around it? I have an embankment that is too steep to mow and very rough from varmints digging homes in it every year. It is also the only (I think) place with PI left on the property. I'd love to have all the weeds, briars, and tree starts out of there and a healthy, colorful cover planted on it.
Click to expand...

I took some out of bounds stems, from this bed, and planted them on a bank, in two separate places.

The transplants have spread really well on the bank, which was mostly brambles, golden rod, and unmowed grass.

I cleared areas for the transplants, by cutting the brambles, and pulling up the grass and goldenrod (which looks really terrible after it dies).

So I now have two colonies on the bank, about 10 feet from each other. Eventually, the whole bank should be covered with these.

I have a self sowed colony by a fence. I just leave it there.

I do have some self sowed stems in some of my raised bed gardens, which will be relocated.

I don't know why this isn't used more for highway embankments and medians.

It would cut down maintainence a lot, help declining bee populations, and look amazing.

It needs no attention, no additional water (my garden can be wilting, but it never looks wilted), no fertilizer, no clipping, it needs nothing! It's winter hardy too, and doesn't even need mulch or anything.

I rake this bed out a bit in the spring, but one really doesn't have too. I think the previous years leaves biodegrade, and feed the plant the following year.