Talking about snow and cold and winter... these are pics of the second snow of the year here (this morning). Multiple inches... 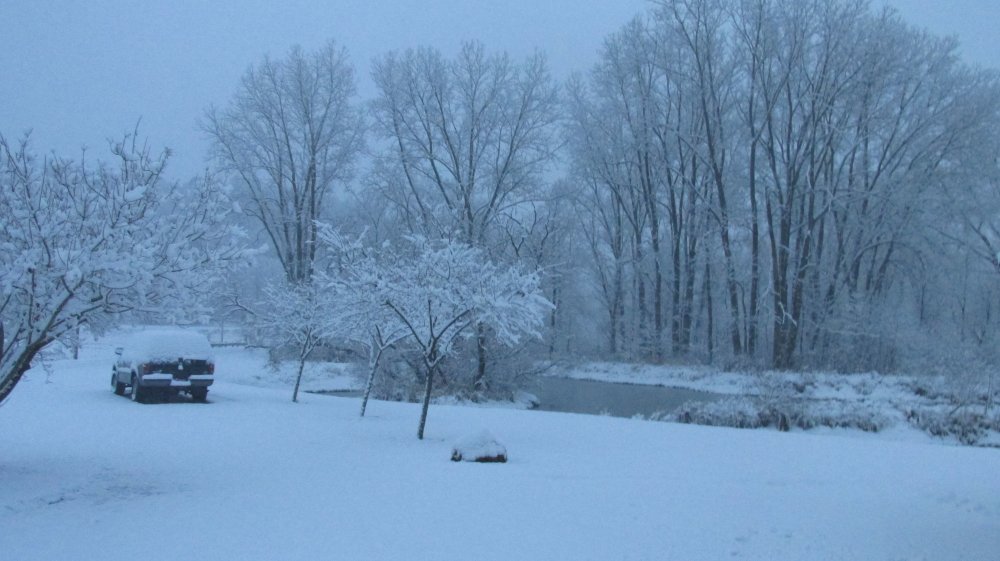 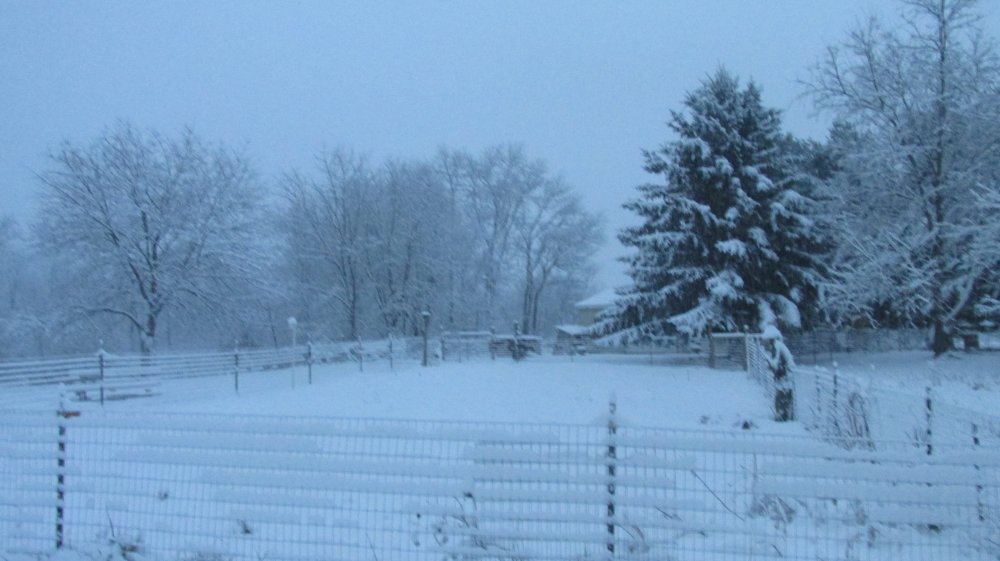 Yup, had lots of shoveling to do! How many months until spring comes back again?

This is also this first winter that we're letting the ducks into the pond. 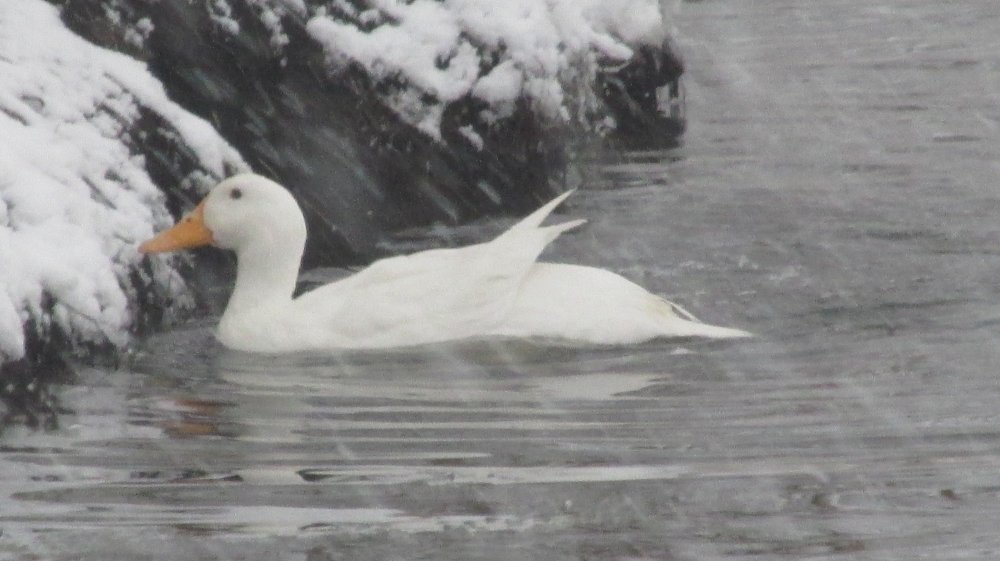 We've been at double digitS despite more severe forecast temperatures. Soon, there's to be a little bit of a warm-up! It absolutely cannot rain! Driving will be a complete disaster on the frozen roadways.

Us wilting blossoms should be sympathetic to southerners. We know you aren't accustomed to winter weather. The skin on my digitS' isn't accustomed!

Wow! Sometimes it's hard for me to imagine weather like this. Last Saturday it was hot here. Overcast today and supposed to rain Thursday and Saturday but temperature will only be 61.

After a rather serious bout with pneumonia, I had chronic bronchitis much of the 3 years I lived on the northern California coast. (It didn't help one tiny bit that I smoked and was too dumb to quit

It was a beautiful place to live but physically, probably not the best place for me.

After many cold sunny days, I almost saw the sun today. It was supposed to be above freezing but won't make it. I didn't realize that and made a run to an orchard to get a 30# box of apples. Hope they didn't freeze in the back of the pickup.

The duck picture is a good one, just needs a little bit of the right side cropped out and it would be great.

And I'm not sure if anybody is absolutely accustomed to the crazy-cold weather. The past few winter for many of us have been way worse than usual.

Whoa, 61 degrees is hard for me to imagine right now, lucky! That's about the temperature where I really start to sweat when engaging in any sort of physical activity outside.

We all have our different ups and downs when it comes to climate - might be cold here but over there you might have nastily high humidity or something like that.

TheSeedObsesser said:
The duck picture is a good one, just needs a little bit of the right side cropped out and it would be great.

And I'm not sure if anybody is absolutely accustomed to the crazy-cold weather. The past few winter for many of us have been way worse than usual.
Click to expand...

it usually takes me till January to get used to the 20-30 degree daytime temps and feel somewhat comfortable. but right now i'm just freezing my behind!

The map on the first page sure shows some relief from severe lows by Sunday -- right across the US!

I'll call them "severe" even if it's a value judgment ... but! the only lows in the teens are those forecast for the highest communities in the central Rockies.

Right now, I'm trying to think how to be comfortably at home between now and then. We may get sufficient thawing by the weekend that the highways aren't ice rinks. I'm one lucky duck not to be commuting to work those days.

I've lived and worked 4 degrees off the equator in Nigeria and Angola. Hot and steamy was the norm. I'd go out in the midday sun in Nigeria and jog around a two mile loop. I did that practically every day at lunch. No big deal. Several of us did. People really suffered on the rare occasions it dropped into the upper 50's. That was not often.

I worked in Kazakhstan where the coldest temperature I was outside walking around in was -20 Fahrenheit. As long as the wind was not blowing and you were dressed for it that wasn't bad. Wind made it miserable and dangerous.

I spent a year in England when the temperatures got up into the 80's for about a week that summer. People, especially old people, were dying from the heat wave. Housing and clothing were just not set up for that type of extreme heat.

The coldest I think I ever was came when I was living outside Cadiz Spain in 90 degree Fahrenheit weather and flew to Edinburgh Scotland where it was right at freezing and spitting snow and mist. The wind was pretty strong. I was dressed for it but certainly not acclimated.

The most I think I suffered from the heat and humidity was when I was in the army in Korea. I was on guard duty when we were in the field, sitting in the shade of a tree. I reached over for my canteen of water and was instantly soaked in sweat for that exertion. I was 22 and in great shape but I'd been spending too much time in the air conditioned communications bunker.

Last Sunday afternoon when it was right at freezing and a few snowflakes were drifting down I went on a hike with a retired geology professor across the side of a mountain. There were 29 of us and we were protected from the wind. It was a great day and a great hike. The last and only geology course I took was the fall of 1969 but I took several soils courses in engineering and occasionally worked with geologists on some projects. I remembered enough that the geology was really enjoyable. I understood most of what he said. Of course he dumbed it down a lot since most of the people had practically no geology at all. More of an 001 level instead of a 101 level and plenty of good stories.

We live in a wide variety of climates and we ll spend time outside. We have to adjust to the conditions where we live, whether that is avoiding driving on ice, avoiding an dangerous cold wind, or dodging a hot noonday sun. I'm fine where I am now with four seasons. The coldest we've seen so far is +10. It was barely above freezing when I woke up this morning with no wind. I'll be working outside today since the wind is pretty calm, cleaning out the chicken coop for sure and probably removing dead stuff from the garden.

Today was my last fall cleanup and the first snow of the year. Kid#1 helped me and we got it done in record time. Had to, the darn snow was covering the beds and obliterating the leaves and perennials that needed cleared out. We were happy to be done with it and now I'm semi retired for the winter! Yippee!

It's kind of funny, Kid#1 was in Oahu yesterday, soaking up the warm sun and sand, hiking around in shorts and t-shirt. Today he was jeaned and booted, hood up, raking dead leaves in the snow.

I am clearly paying my help too well when they can take a Hawaiian vacation and I can't.