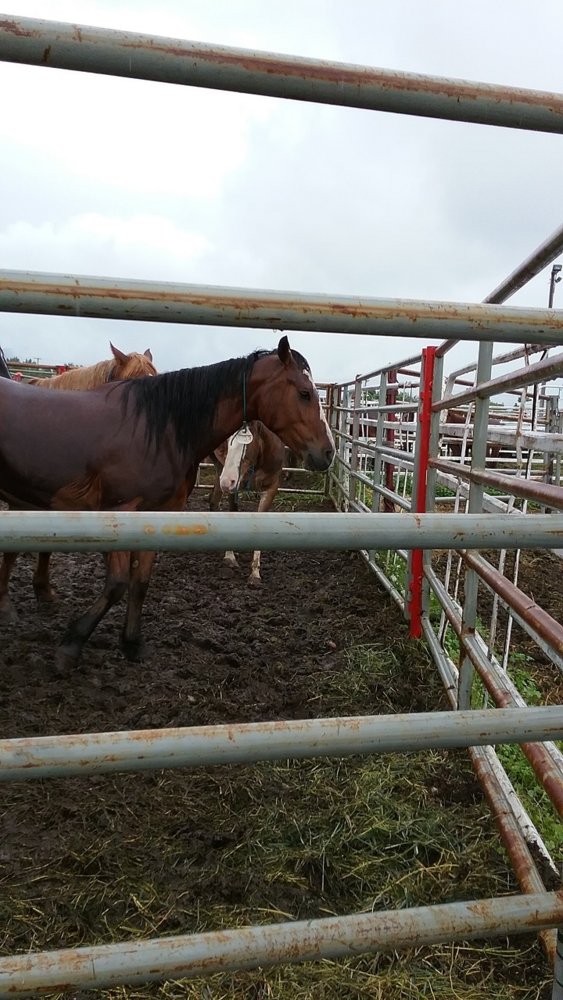 The day I saw her at the mustang and burro adoption event in Missoula MT, last June.

I was not there to adopt, I was there with friends who were. Just along for the ride. I was behaving myself uncharacteristically well, and kind of proud that I was showing some amazing restraint.
It rained steadily all day and the horses and burros were cold and uncomfortable.
I kept looking at this particular pen, and this particular mare. She caught my attention with her nice head and compact body, and bay is my favorite horse color. I sent dh a text with a pic of a burro and a "look what I got for you!". He called to chat and I told him about the little bay mare. Nobody was bidding in the silent auction for her or even most of them.

My friend won the bid on the trained mare she wanted and we all piled in the car for home. I took a last sad look at "my" girl. She was in the last chancers pen. Animals that have been to a specific number of adoption events and aren't picked up take a final ride.

When we got home dh asked if I had bid on the little mare.
I was surprised and said no, for once in my life I was not informing him after the fact of a new animal acquisition.
He urged me to track her down and see if I could still adopt her.
Lets just say I wasted no time doing this!
With the help of my wonderful friend and neighbor I was able to arrange for her to go to a Montana mustang trainer who works for the Mustang Heritage Foundation.

This was her the next day when Mustang Matt picked her up from the pens. He wanted to confirm he was getting the right horse. 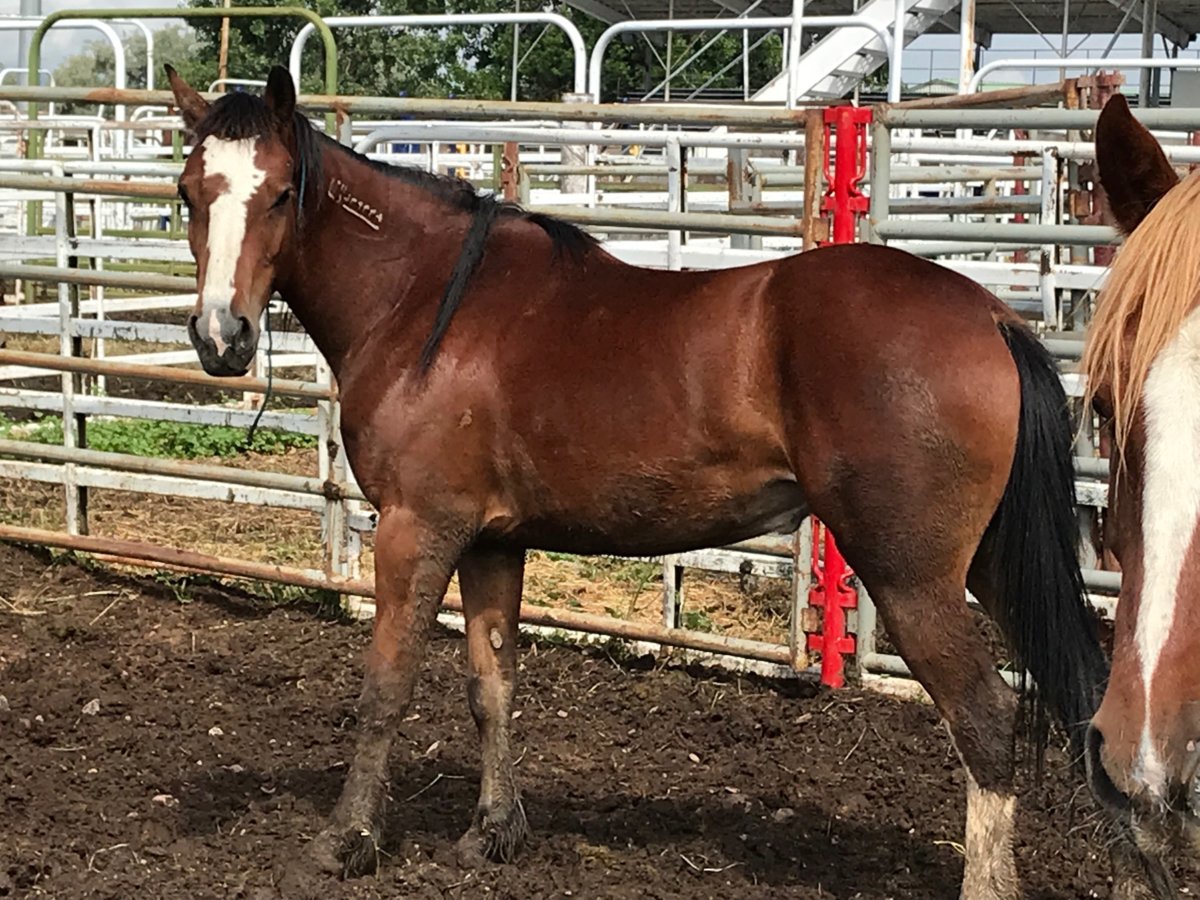 Matt put the basic 14 days on her as required by the MHF, this stipulates that the horse must be halter broke, pick up all 4 feet and load in a trailer. Matt is a gifted and conscientious trainer and he did a lot more than the basics. He also taught her to hard tie, yield her quarters over at a touch, flex her neck around with the slightest halter pressure and load and unload in various trailers, as well as get used to traveling in one tied. He did some round pen ground work with her also. At first he said she was extremely defensive and a fighter and he was concerned she would not stop resisting. Never mean, but she had to be convinced that doing things his way was easier.
This gave me pause when he told me this on pickup day.
But he also said, once she believes you she is fine.

This is me listening to Matt tell me how he's been working her and what she knows. 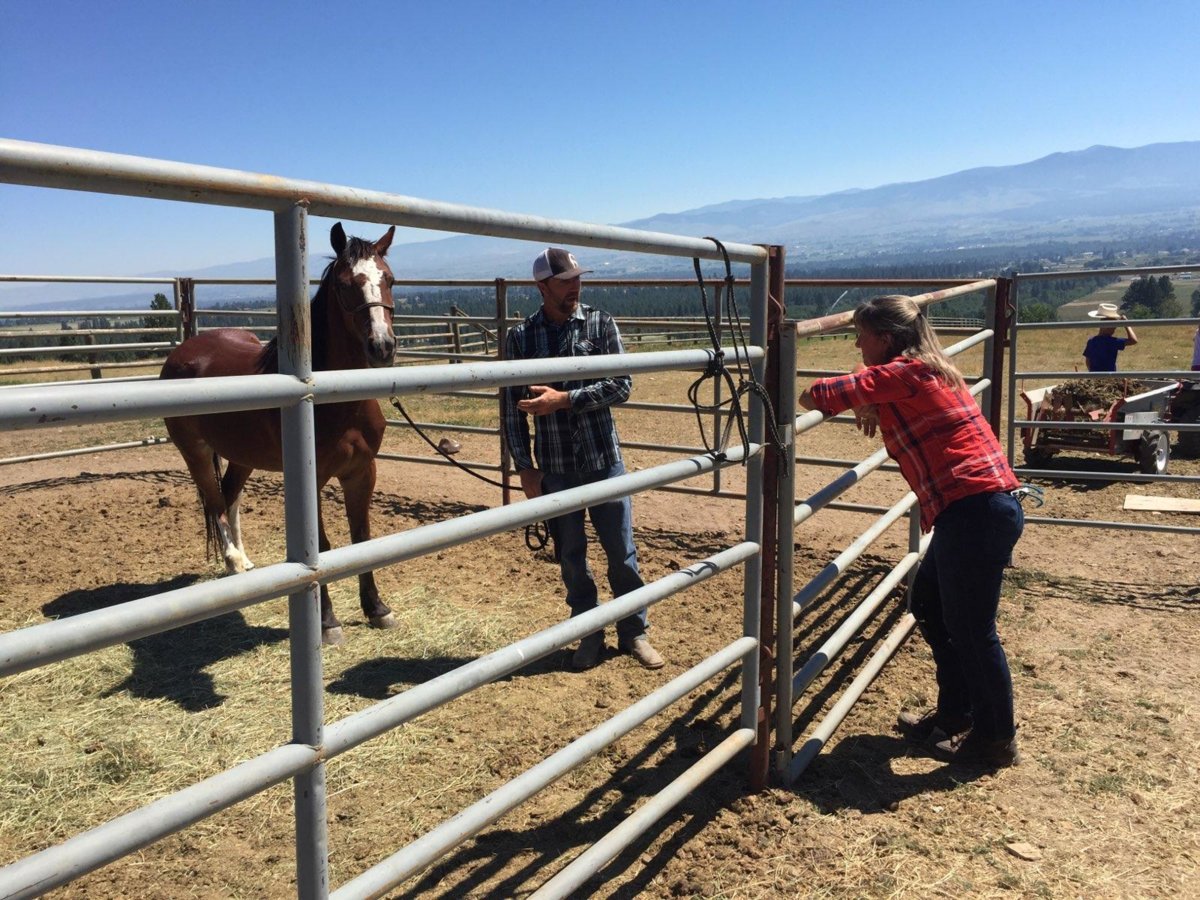 We picked her up last Friday. She rode quietly in the trailer for 4.5 hours and unloaded nice and soft when we got home. 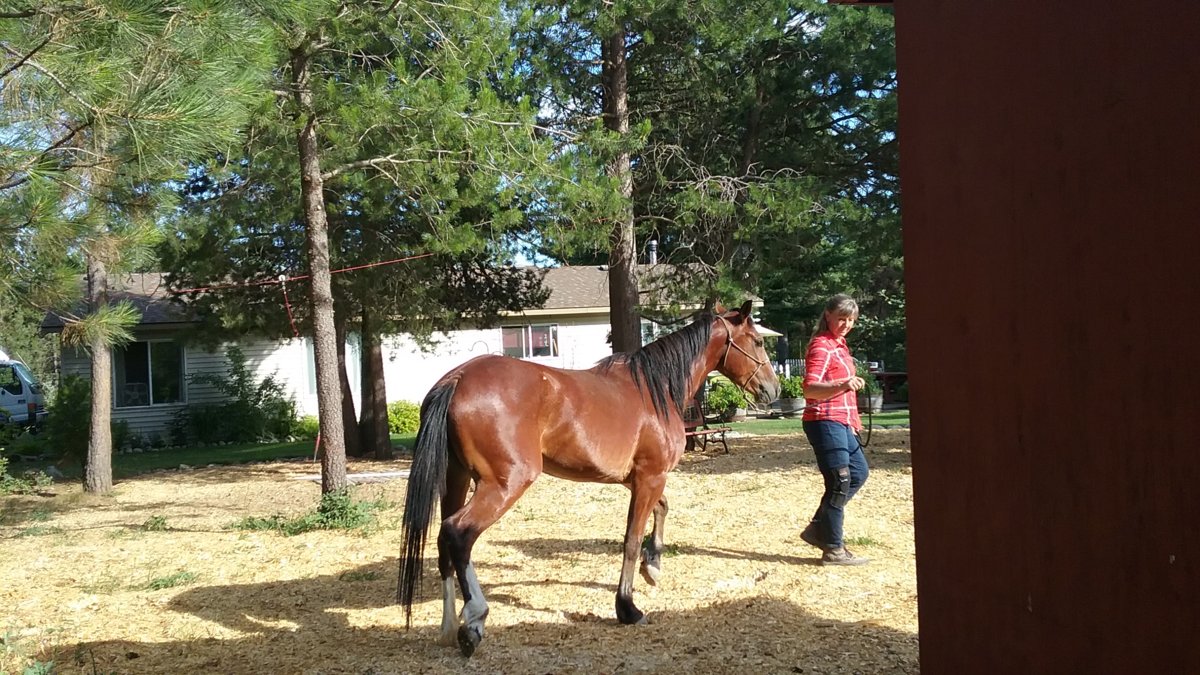 Her first meal in her new forever home. 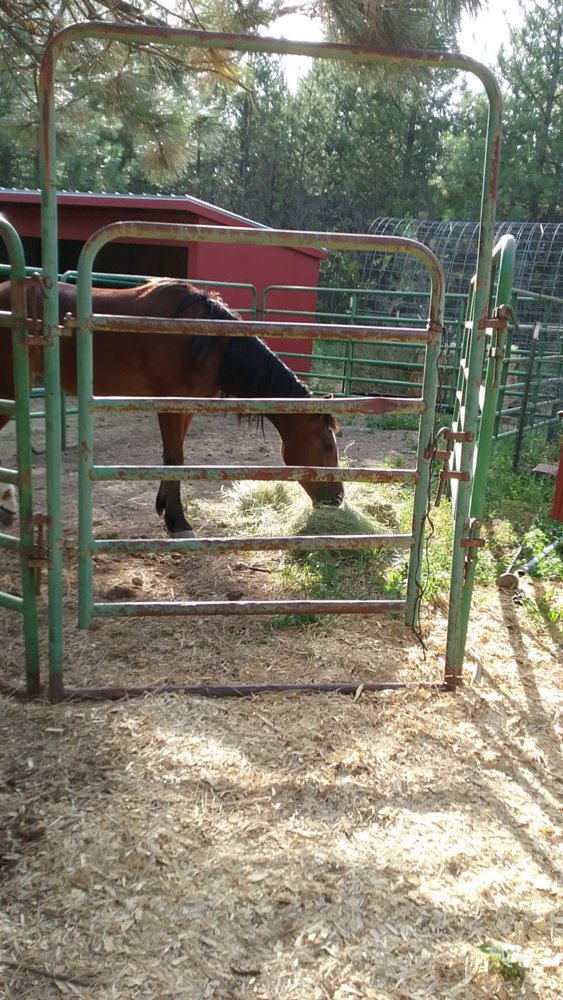 She is doing well for a 3 year old horse who until 14 days ago had not had a human hand put on her in kindness. I don't mean she was mistreated in the holding facility, but they only know people as those who chase them into corrals or trailer, or chutes for shots and freeze branding.

She is snorty and blowy and wary, but will allow me to halter her and handle her. My goal is to earn her trust, before we go further with any more training. This morning I went in her pen, stood side on to her and just breathed deeply and rhythmically. After about 3 minutes she slowly approached and touched my arm and stood quietly next to me. I was over the moon! I believe now the barriers will begin to crumble as we build a horse/human relationship.

And Luke decided she was pretty okay too.

write this all up and send it as a story to some magazine. very sweet all around. my eyes are all misty and stuffs...

She is a lovely girl, I see why she captured you. Now begins a lifetime love story.

Do you use food treats for training ? She is a very lucky horse, to go from last chance pen to your house.!!!

Love to see you so happy with a new horse. Kuddos to her for catching your eye and going to a fantastic owner who will treat her with love and kindness.

I love this story.

murphysranch said:
I love this story.
Click to expand...

Yeah, we've had the introduction, waiting on Chapter 1, with pictures of course!

she seems very alert/bright. in the one picture to me it looks like she is also smiling at the camera as much as you are, with those ears poked up and looking straight on.

It's been 2 and a half weeks with Syringa now.
She is gaining new layers of trust daily. I purposely go in her pen several times a day and just approach and stand near her, without demanding anything, just kind of hanging with her. I don't want her to think whenever I come in she will be haltered and worked with. She now will approach if I stand in the middle.

She is still very much wary and flinchy, but not so snorty and blowy as she was.
She has relaxed with me enough now to let herself enjoy the hard scritches along the top of her mane where she has some real itchiness. She lowers her head to the ground and really leans into my rubbing, almost as though she will topple over from sheer bliss. Pretty cute.

When she is tense and amped however, she will just stand stoically when I rub her sweet spot, not letting on that she likes it.

She will let me pick up all 4 feet with out too much tension now, but is no where close to being able to have a farrier work on her. I'm dying to get her feet looked after as they are in poor shape.

Though Matt the trainer was doing everything I'm doing and I haven't taught her anything new, I still want to earn her trust before I begin introducing new skills.

I hard tied her for the first time last week. This was something I was a bit cringy about since Matt told me how she fought it in the beginning. I finally just pulled my big girl socks up and did it.
I have a high tie, with a heavy nylon strap intended for a cross tie with a panic snap on the end. It's wrapped around a stout pine, above a branch.
She tied cool as a cucumber and calmer than old Luke. Big sigh! 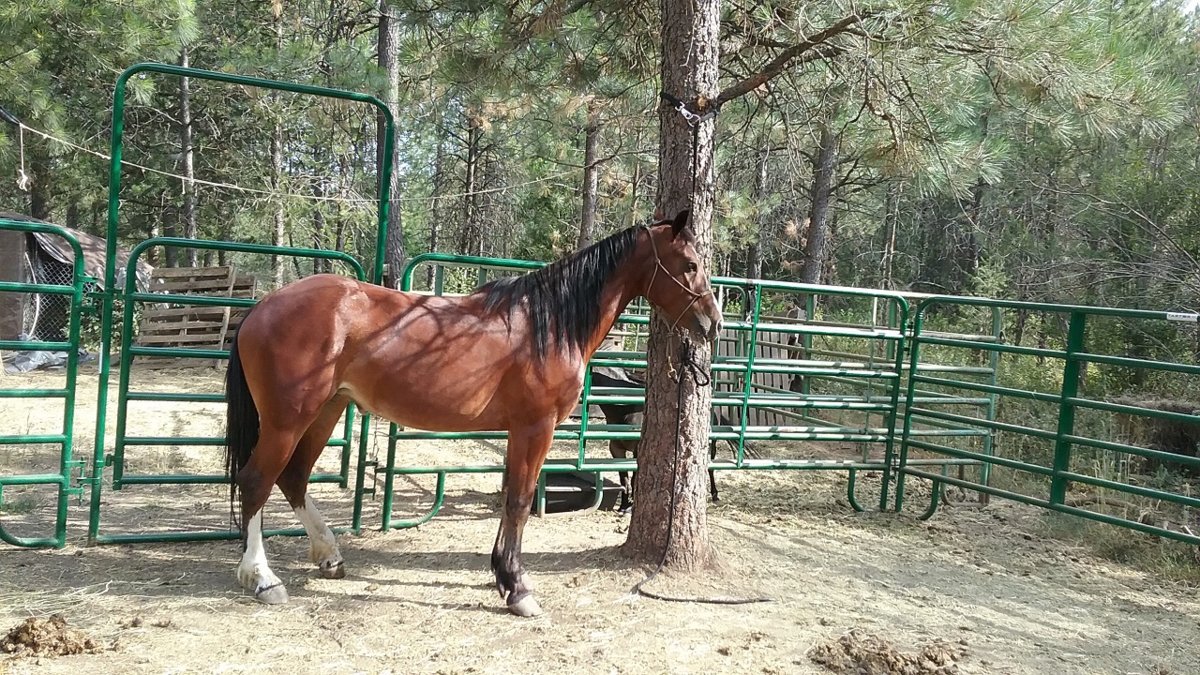 We take walks out around the property and have ventured down the dirt road. She is respectful of my space and the few times she jumped in alarm at something she didn't even hit the end of the rope before she came back to a stand still.

She keeps an eye on vehicles but doesn't appear overly concerned about them. I have a few obstacles I set up for her. A tarp to walk over, a 4x8 OSB panel to walk across and some metal poles that clank if she steps on them. She's been very trusting of my judgement and will follow me over (after a sniff and a nibble, haha).
This week I'll have a small round pen set up for a bit of ground work.
I really like this girl.

I have been able to brush her a bit, but she doesn't really relax. Her mane will be cut off at some point because it's mostly dreadlocks and would be a real major project to try and salvage. I also have not attempted brushing her tail out. Right now I'm working on being able to walk behind her without too much agitation on her part.
You must log in or register to reply here.
Share:
Facebook Twitter Reddit Pinterest Tumblr WhatsApp Email Link