It seems that I recall that Katrina wasn't such a terribly strong storm, @Ridgerunner .

I'm even wondering if I remember that it was more of Lake Pontchartrain that was catching most of the storm.

What is said about the leevees and such and the potential for New Orleans flooding?

It seems that I recall that Katrina wasn't such a terribly strong storm, @Ridgerunner .

Katrina was a pretty strong storm before it hit, a Category 3, But it did weaken a lot when it got close to land. But since it was a strong storm earlier it caused a lot of storm surge. If the winds were not blowing so strongly out there it would not have pushed that much water. Katrina was a surge event but also a wind event. Wind did a lot of damage, I even got a new roof out of it, but the flooding was what was really bad.

I'm even wondering if I remember that it was more of Lake Pontchartrain that was catching most of the storm.

The coast down here is riddled with canals and bayous. The direction of storm approach and whether it is pushing water into those canals and bayous or across their mouth has a lot to do with how much water comes in and where it comes in. Just before she hit Katrina jumped about 30 miles to the east, not an unusual occurrence. They can do that. A lot of water did get pushed into Lake Pontchartrain but that jump also pushed a lot of water into the Mississippi River Gulf Outlet Canal (MRGO). That put a lot of water where it did not need to be.

What is said about the leevees and such and the potential for New Orleans flooding?

People still get pretty passionate about this. During Katrina the levee system was supposed to handle that kind of storm. But the study afterwards showed that it was not. The US Army Corps of Engineers did not necessarily follow all their own rules when it came to the design. The took some short cuts. And, to share blame, the levees were not maintained like they should have been. That falls on the politicians. Operating procedures were not very good. In Jefferson Parish the generators were set up to provide power to the pumps, but they did not have a safe place for the operators to stay so nobody was around to operate them. Plenty of shared blame to go around.

Since Katrina there has been redesign and much strengthening of the levees. That's not totally finished but we are in pretty good shape. The MRGO has been closed and sealed. Pump operators now have a safe place to ride the storm out. Some infrastructure is still ancient, in the City of New Orleans especially. All the 97 pumps were running when this started and they had enough generators running to handle them, but two generators to provide redundancy in case another generator goes down are not available. One is being totally replaced. The other one is being repaired but won't be available for another month at least. It also needs to be replaced but they are doing what they can to get some redundancy.

But this is not a flood event. It is a wind event. Flying debris, trees down, power poles and lines down, communication towers damaged or destroyed, Wind is where the worst damage and danger will come from.

looks like the eye is just now hitting shore.

The storm surge the weather service is suggesting: "Maximum inundation could reach 7-11 ft above ground level somewhere along the Mississippi coast."

Thinking of you this am.

Power came back on at 8:30 Thursday evening. Some fence and roof damage but overall life is good.

I have now been through the eye of a hurricane. Was not really on my bucket list.

Glad you are o.k. and power is back. Hope the damage is minimal. And hope you never have to do it again.
Last edited: Oct 30, 2020

I am getting really confused. We just had Tropical Storm Zeta last night. The house was in the eye. When I came to post about it I saw my posts from the previous storm and flash thought I had posted up already. Make it stop! Btw got lucky with Zeta, Becky has a bash on her truck from a rotten limb but the new metal roof held up like a champ to the TREMENDOUS amount of green manure that rained down from the hardwoods. We have not had power in 24 hours, and my generator took a nap so naturally it was too late to buy one anywhere. Yet here we are with at least lights and refridgeration, because I wired my Chevy to another battery and that to an inverter. I love that truck. Just compost me if I cannot be buried in it. 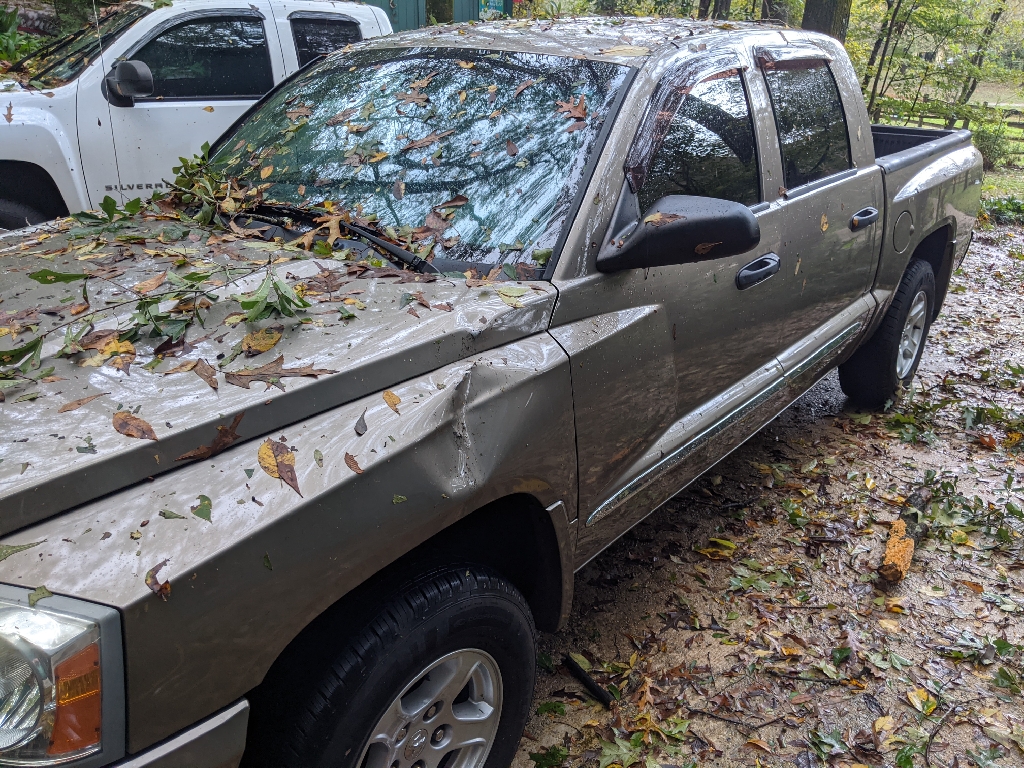 glad to hear everyone is okay.