The Anderson's Purple King and Buona Della Montagna are up now! I watered them good this afternoon to help them on their way!

That's great Bay. All three of your grow out varieties are up now. Did you keep any Globula seeds to grow this year. I remember your husband was dying to eat some last year. I think you said they were very productive too.

I'll show what I plan to grow this year. These five are from beans I got from Russ, some of those cross-pollinated ones. None of them look like the bean I planted so what I get this year is totally unknown. 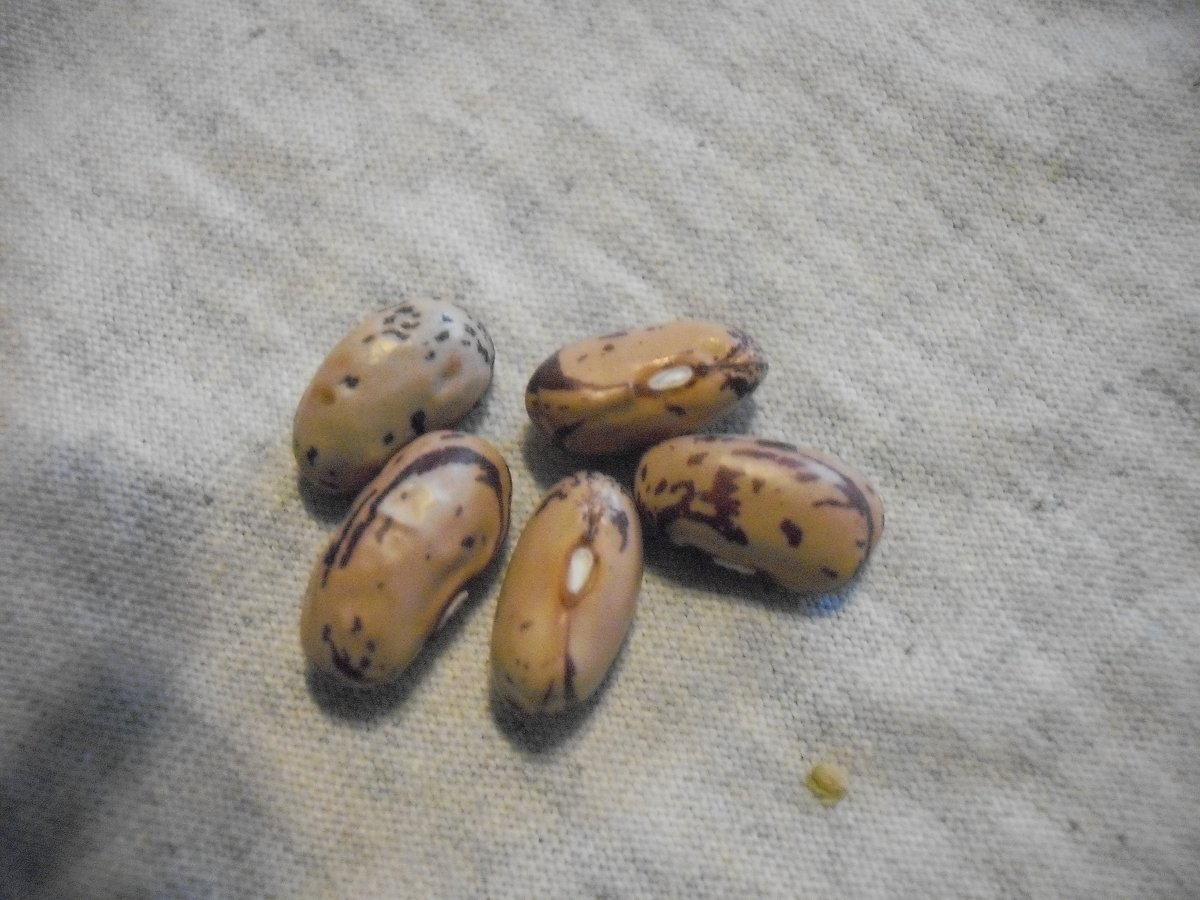 Jas was one of the 39's, a pole bean with striped pods and a gorgeous lavender colored bloom. 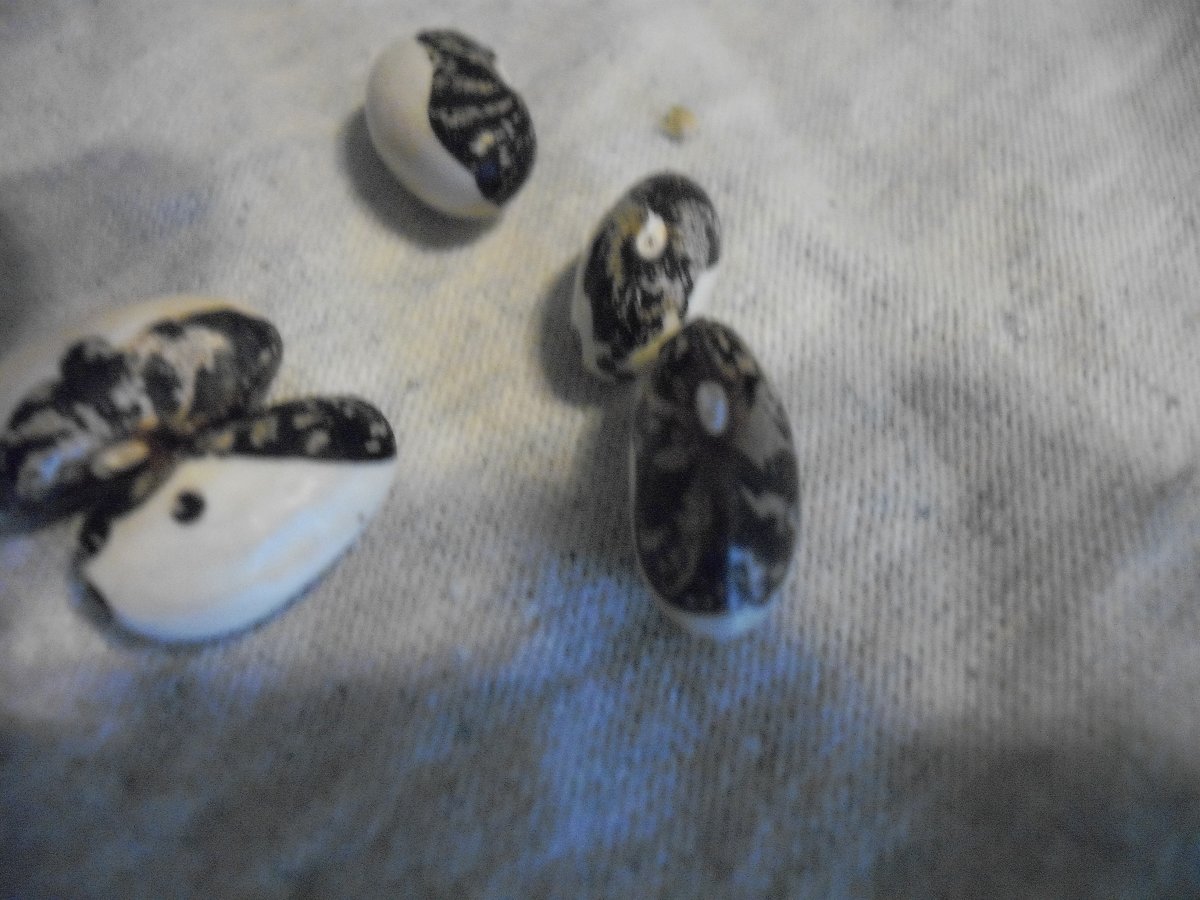 Karachaganak (Kazahk for dragon) was also a 39. It was a pole with solid green pods and that lavender colored bloom. 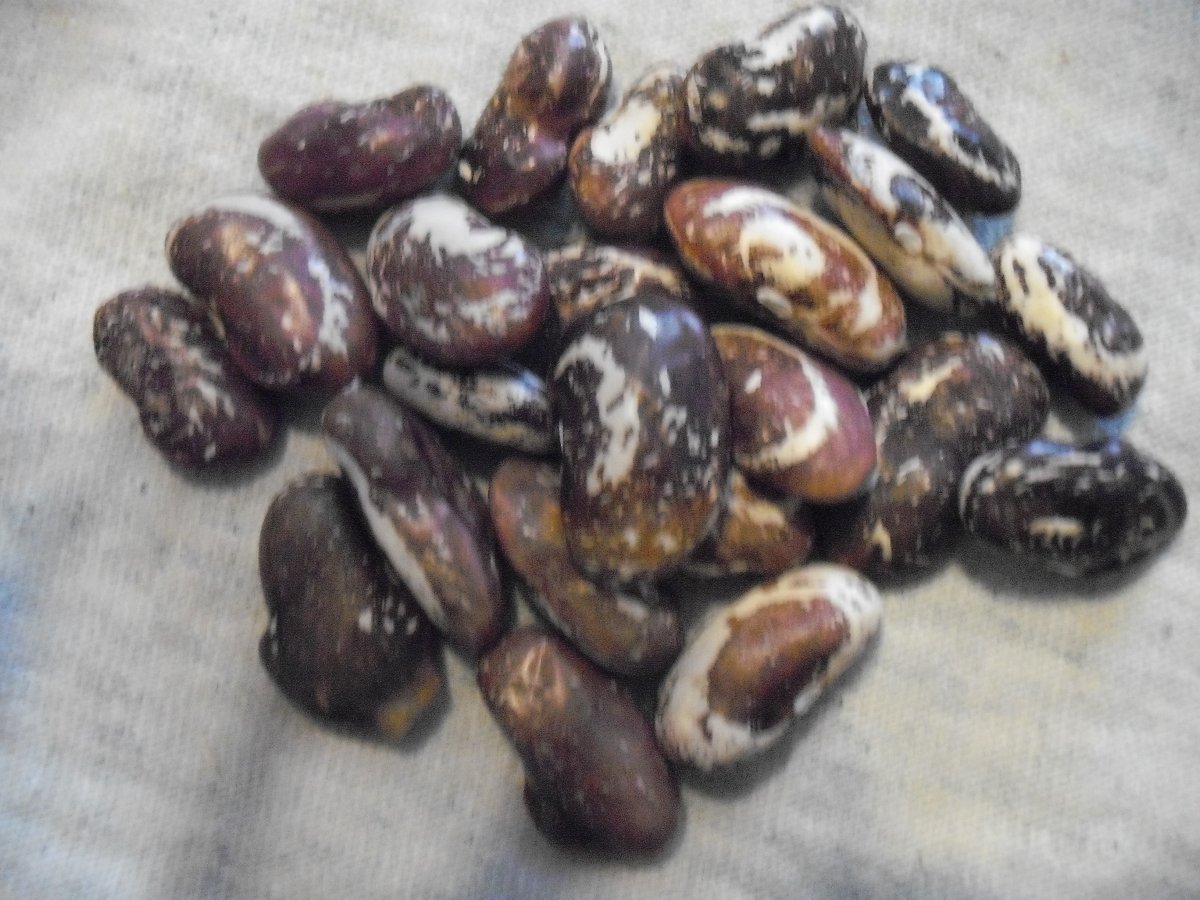 Miss T was from the 323's. It was supposed to be a bush but grew as a pole. It was extremely productive, over 500 dried beans from one plant. The pods were a solid green and the blooms were a combination yellow/lavender. I'm pretty excited about this one. 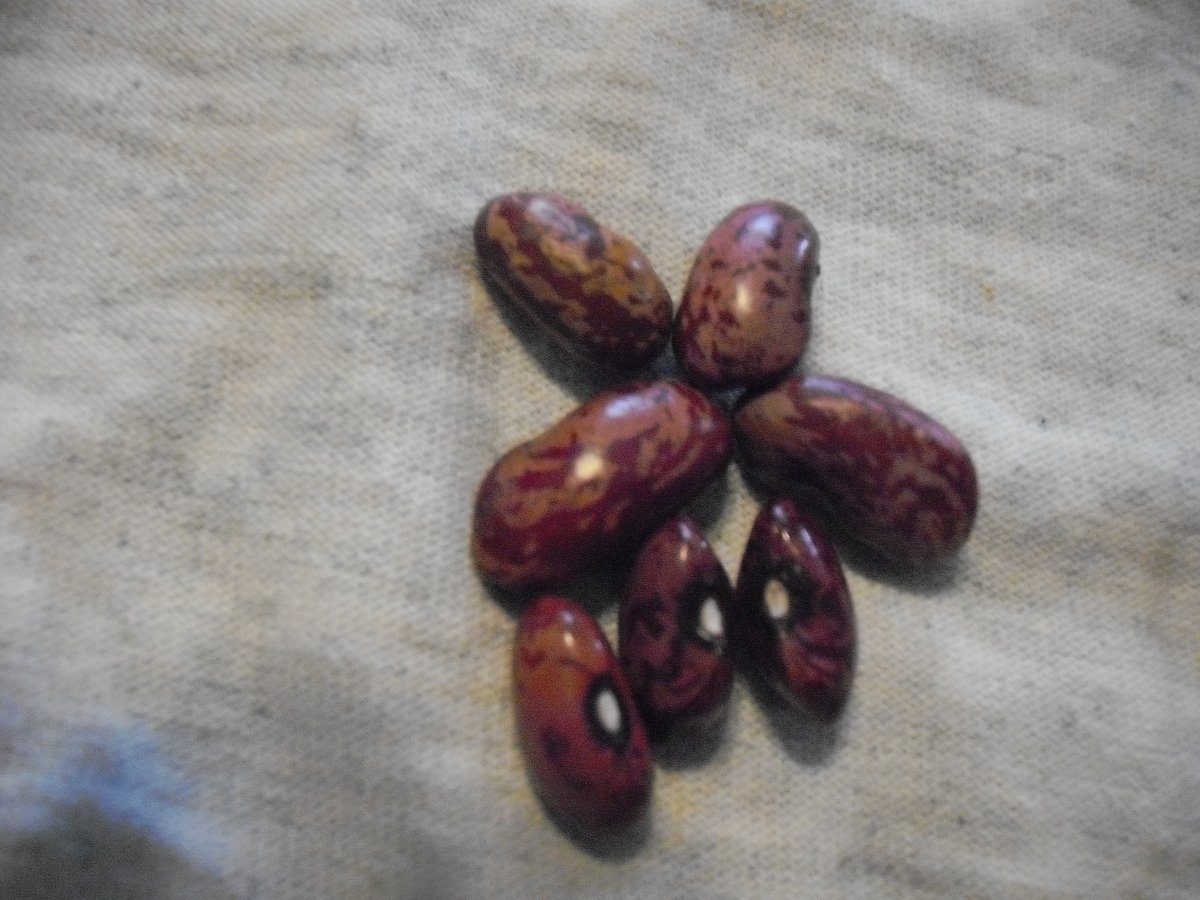 Raspberry Ripple was from the 27's, again a pole that was supposed to be a bush. Pods were solid green and the flowers pink. 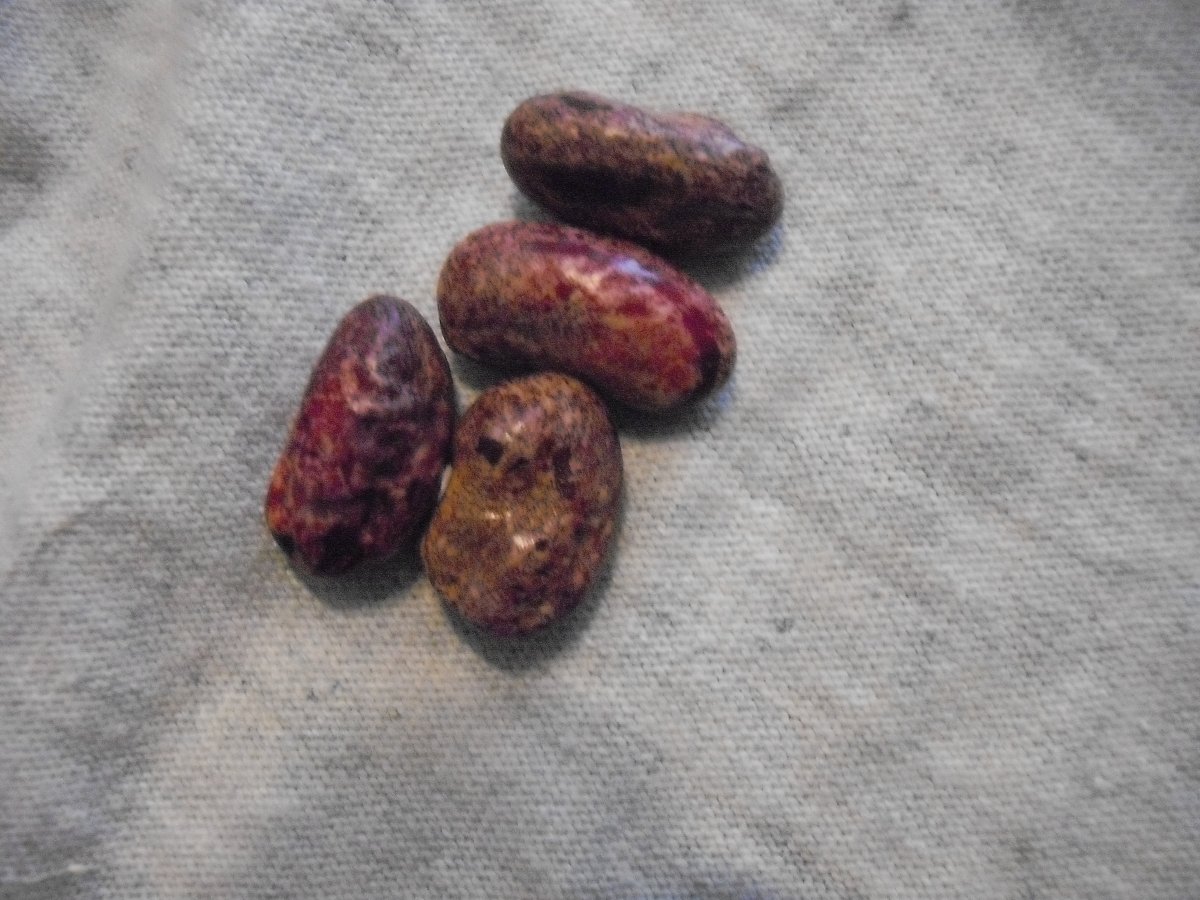 Stinking Creek was from the 38's, It was a pole that had solid green pods and pink blooms. It only produced 4 dried beans and two of those don't look great so I'll see if I can grow it and get something. This is a pretty lousy photo, the two good ones are very pretty, especially in sunlight.

Some things I learned from planting these crosses last year. You don't know for sure if they will be pole or bush. Each individual plant will produce seeds that look pretty much alike but two different bean plants that came from the same batch can look totally different. Look at my top two above. The seed I planted for both of those 39's looked the same, yet you can see how different they look. But sometimes you can get beans that look pretty close alike yet if the bean pod or the flower is different it is a different variety.

So this year when I plant them I'll plant them so I can stake them if they turn out to be pole and I'll spread them out enough so I can harvest dried beans from one plant and know which plant they came from. Some of that will be to just spread them out. For some of them I'll plant a bean, a pepper, a bean, a pepper, a bean, an eggplant, and so on as I go down the row. It was quite frustrating when I couldn't separate eh beans by individual plants, especially when they turned out to be pole when I thought they would be bush.

I'm doing a little more but I'll cover that later, I have an appointment fast approaching.

Those others I mentioned. 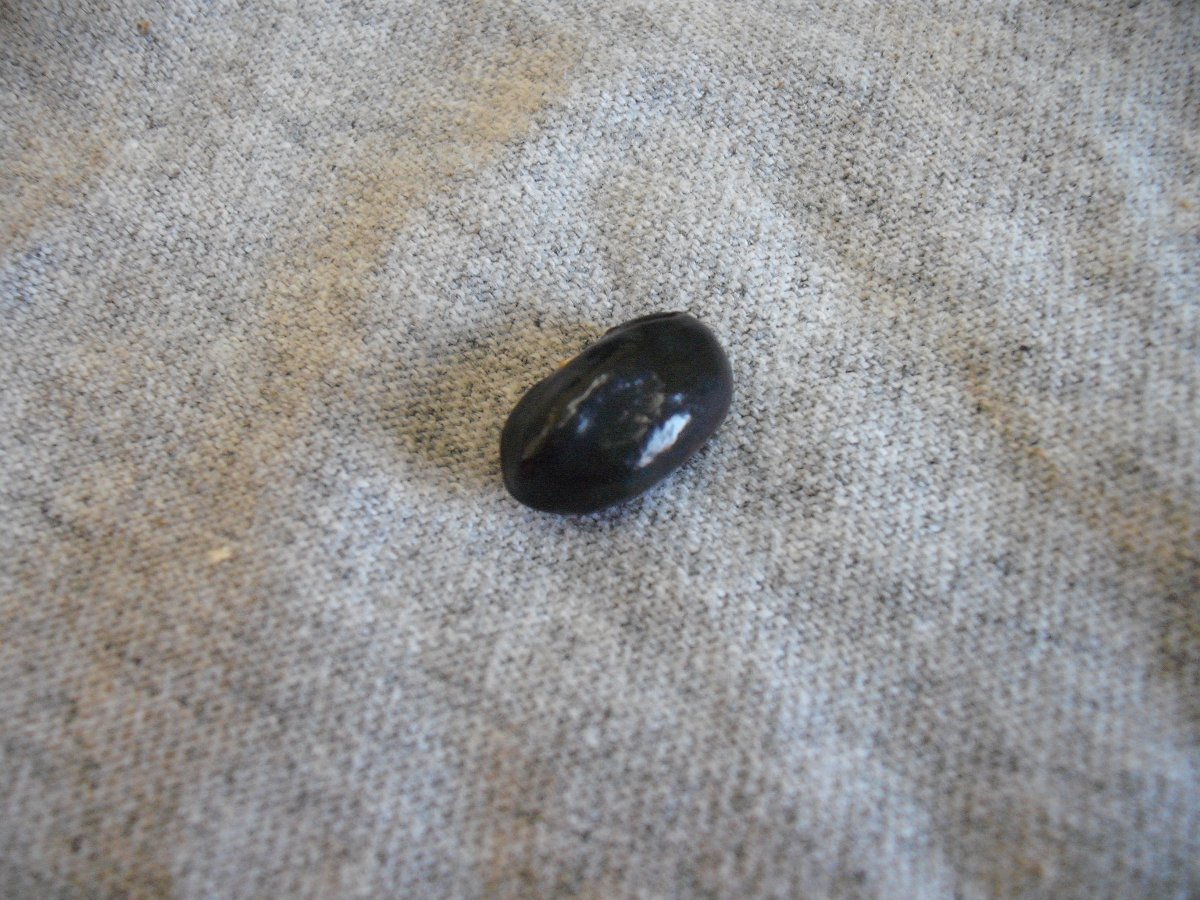 Last year Russ, Annette, and I each had a bean plant that flowered very well but just would not set pods with seeds in them. Mine, a 39 pole bean, did eventually set one seed. One lonely seed, a black one. But it was flawed, part of it was that brownish color that probably means decay. It's on the underside in this photo. I don't have much hope it will even grow. if it does I think the plant will be weak. But I'll plant it and just see what happens. 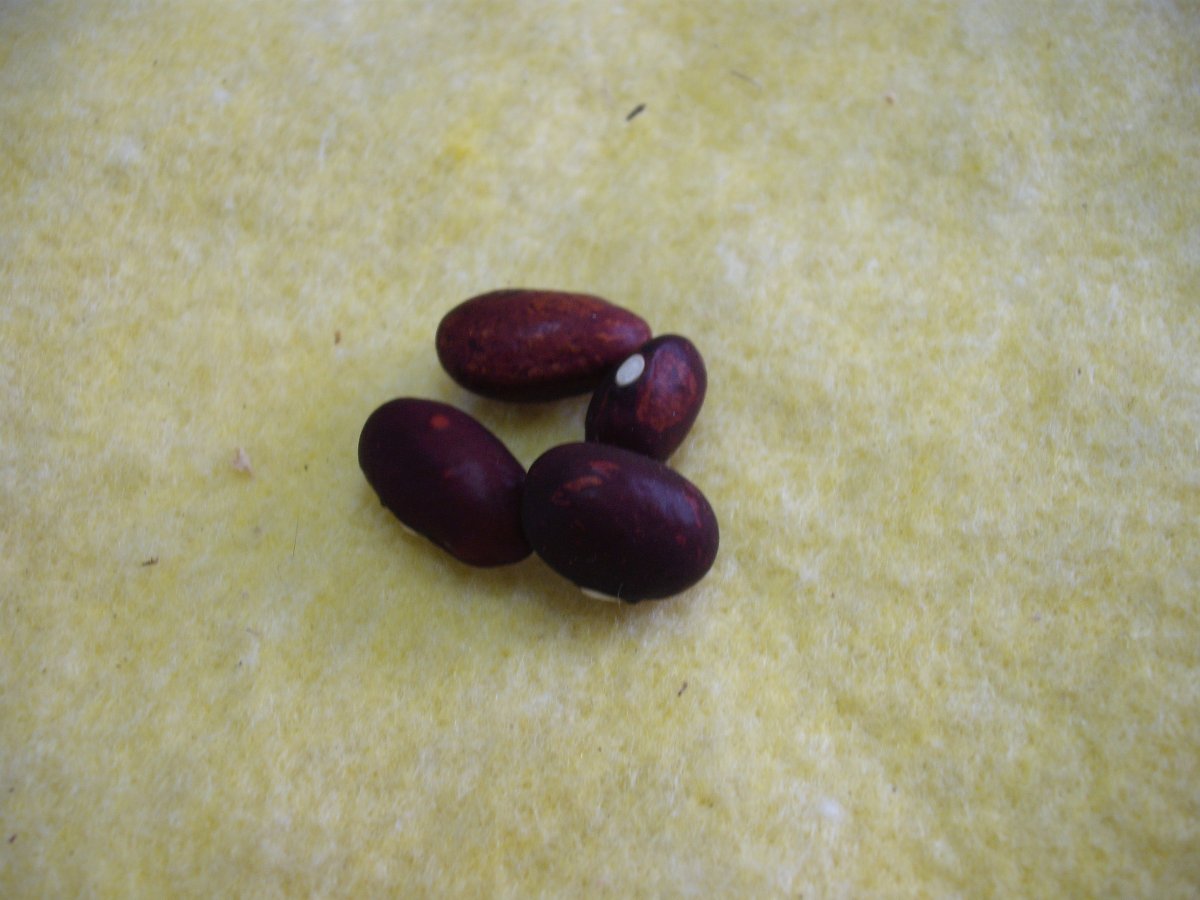 I did not plant all the 38's I had last year, I held some back to compare what was planted to what was produced. And I just ran out of room. So I'll plant these four #38 this year to see what happens. Germination was pretty good last year so hopefully some of these will grow. 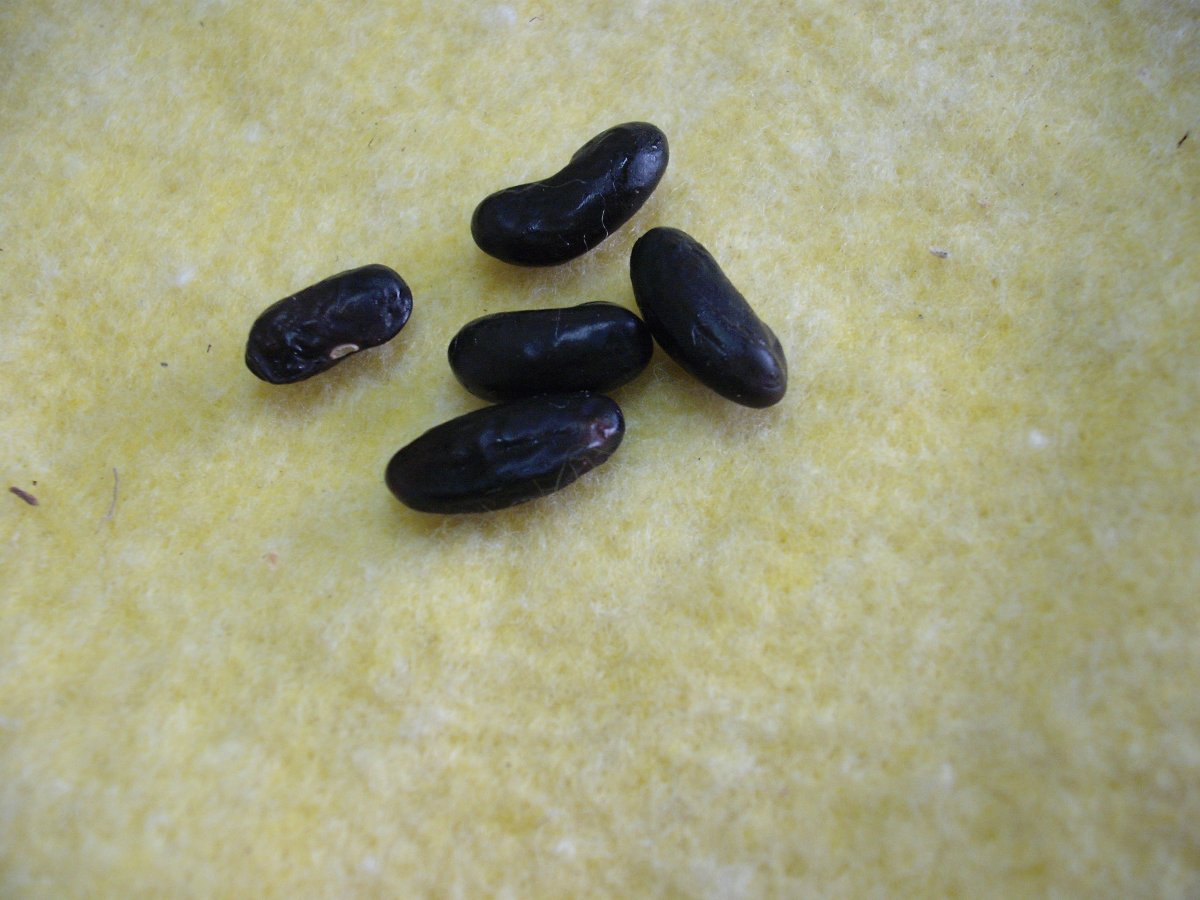 Last year I got some Bluejay seeds from Canada. Yes, that company had a legal export to the US license. This is a bean that Russ developed and named. The original Bluejay had a pattern, I'll put a photo below so you can compare. A few showed up with no pattern. They are exactly the same color and shade as the Bluejay so I think it's just a natural pattern variation, but I'll plant them and see what I get. I'm hoping to be able to send something to Russ this fall for his assessment. 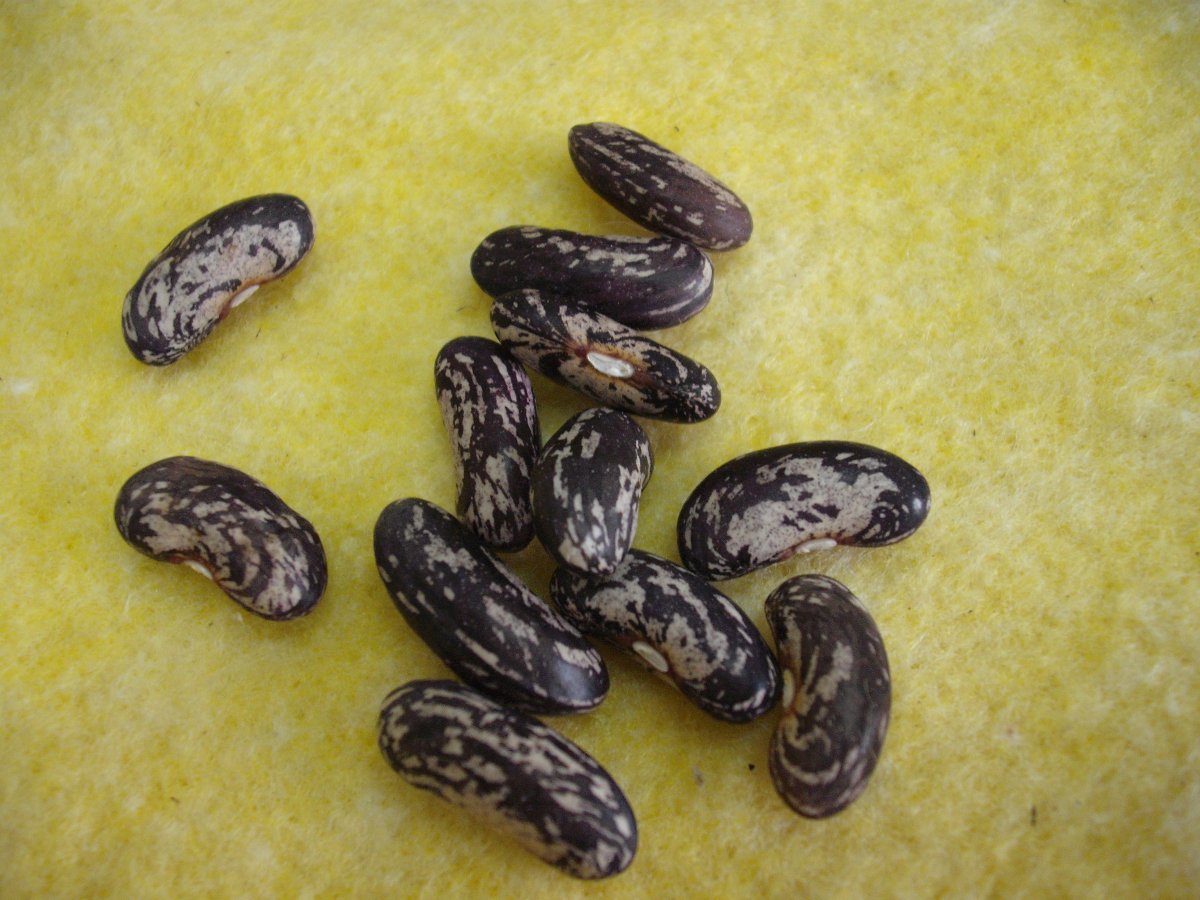 The regular Bluejay seed for comparison. I saved these to be my early bush green bean. I planted some a few days ago. It's really early but it just felt that it might be time, it's such a strange spring. if these come up well then I'll know the ground is warm enough to plant the others.

That's what I'm planting this year to try to grow out. It will be interesting to see what segregations and stabilizations I get.

One lonely black bean. It looks like a big fat dog tick. LOL I hope it grows for you! Your Blue Jay seeds are interesting, wonder what the solid blue ones will bring?

The dark Bluejays might be a reverse of the pattern. Blue Jay does that like the cranberry beans do. However I've never seen the reverese Blue Jay seeds be that dark. What was the company you got them from.

The outcrossed beans you will probably get some seed that will show the same pattern that you got last year. Some are probably already on their way to becoming stable. Plus you might wind up with some more new ones. The Genes on most beans get sorted out faster than tomatoes after they've been crossed.

The dark Bluejays might be a reverse of the pattern. Blue Jay does that like the cranberry beans do. However I've never seen the reverese Blue Jay seeds be that dark. What was the company you got them from.
Click to expand...

Since the solid Bluejay are the same color as the others I wasn't convinced they were a segregation. Reverse pattern kind of makes sense. I figured the best thing to do is to plant them and see what happens.

I couldn't pass up that Karachaganak either, it's both unusual and pretty. it would be nice if some of them would stabilize, but I'm already thinking of new names. I'm sure I'll need some.

Bean Mail From Stephen McComber a native American bean friend. ( Top Left ) is a pole variety "Cornplanters". ( Top Right ) is a bush wax I was beginning to think might be extinct called "Hodson Wax" First offered to the public by the Harvey Seed Company of Buffalo, New York in 1902. Listed by the Henderson Seed Company in 1906, and by 1921 was being sold by over 100 seed companies. ( Bottom Left ) Is a native pole variety "Mother Earth" ( Bottom RIght ) is another native pole variety called "Seneca Pole" Will try to get most of these grown out this summer. 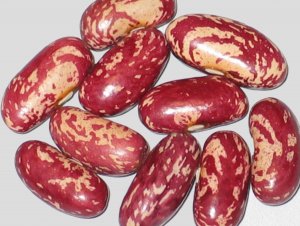 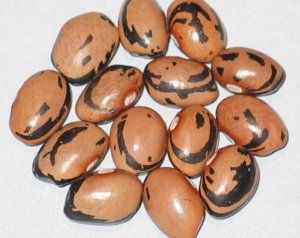 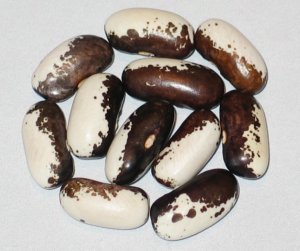 Isn't it amazing how many different colors and patterns are out there? It's a shame beans don't hold their color when cooked, but ones like that Seneca Pole should provide some interest when cooked. You should get a cooked bean with light and dark areas. One of the beans I grew last year, Kutasi Princess, was like that. I used a lot of different dried beans when I canned vegtable soup, I can still tell which were the Kutasi Princess when I eat them.
You must log in or register to reply here.
Share:
Facebook Twitter Reddit Pinterest Tumblr WhatsApp Email Link