Why purple podded? Because it took me over an hour to part the vines, look under, over, upside down and every which way for the elusive green beans in all the green foliage! AARRRGGHH!!! I wear a long sleeved denim shirt in the garden because I break out horribly from tomato vines and the bean vines make me itch. In our heat, I am a sweat puddle by the time I come out of the garden, so speeding up the picking process would highly interest me! LOL

baymule said:
Yes, I sure would like that! Thank you so much!

i'll send them out next time we make a post-office run.

a good day for taking a few pictures of the bulk beans and getting the pictures edited and posted to the website.

this one shows the difference in color between the Purple Dove beans grown in various locations. the lighter beans were grown in poorer soil (with very little or no organic matter, clay and in some spots very poorly drained). the darker beans were grown in the North Garden which has actual loamy topsoil put down over the clay subsoil and that area has had a lot of organic matter added and plenty more weeds buried that grew there over the years. the two other pictures are just closer shots of the lighter and darker ones. though if you look closely you might notice that the darker beans are somewhat different from each other too (by a little bit ).

these are three other bulk beans Red Ryder, Fordhook Lima and Huey which is a cross i've been working on to get it stable. this was the first year i grew out enough to see how they did in multiple locations and soil conditions but also testing how they did when interplanted with Purple Dove.

and a closer shot of Huey, notice the pinker color background when compared to my other Tan Goats Eye bean that i normally grow instead (i did grow some Tan Goats Eye beans too this year to make sure it wasn't a soil or conditions variation). i'll put the link to the TGE beans here just as an obvious comparison.


Huey is likely to become my main bulk small striped bean that i like to use for making chili because it is firm and stands up to being cooked a long time and it doesn't fall apart easily, plus i like how it looks and grows (semi-runner) and it finishes pretty early and will work ok as a shelly too (i think i'll have to verify this next year for sure). since it is a cross from Red Ryder it has the characteristics i really like from that plant (easy shelling, beans fall out of the pod easy for dry and shelly stage, early, does well anyplace i plant it, etc). this year i planted Huey alternating with Purple Dove and even in spite of that it was pretty productive. i think next year i'll be block planting it and should get double the harvest in the same area as i got this season. note that while i'm not solely focussed on productivity of a bean (i don't want to draw too many nutrients out of a garden at one time) i do like it when a plant is moderately productive enough so that i'm also not wasting the space and my efforts.

Russ's 2020 Bean Show
Day 8
​
Drayer Creek - Bush Dry. One of the Robert Lobitz Legacy beans. This one stablize right from the start. There were three rounded oval beans in a seed packet when I first acquired all the Lobitz legacy beans. This white one, a solid black one and a solid brown one. The black one also stablized quickly and is now Black Oak Lake. The brown one is Zumbro Valley. They all have the same identical pod type. Probably the result of the same cross.

Eden Prairie - This is a Robert Lobitz orginal named bean. Very pretty. I have not gotten a good crop of it in about 6 years. The beans in the photo is the entire harvest from this year. 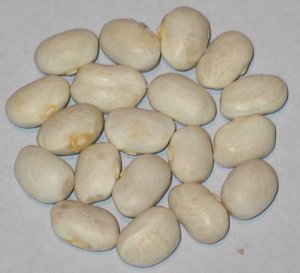 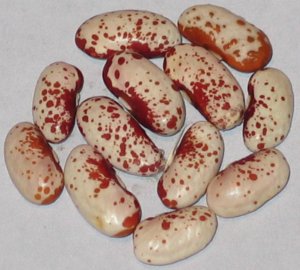 
Eagle Bend - Bush Dry. Another Robert Lobitz legacy bean I named after Eagle Bend Minnesota. The bean does seem to be stable but I'm going to give it some more grow outs to make sure. The first photo is first dry beans of this one of the season. There is not prominent eye patch. It takes several weeks for the eye patch to develop as seen in the second photo 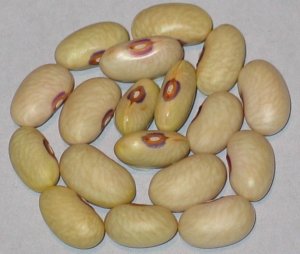 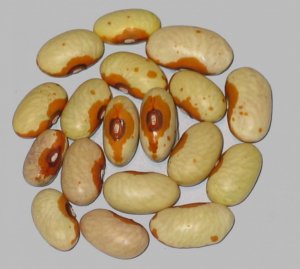 
Eden Valley - Bush Dry. Another of the Robert Lobitz Legacy beans. This is a segregation of the rounded solid brown Zumbro Valley and this one stablize pretty quickly. It has the family resemblence of the similar seed shape and pod shape.

El Rosa - Yet another of the Robert Lobitz legacy beans. I named this bean after El Rosa, Minnesota. Not yet stable and I'm wondering if it ever will. It keeps producing two other seed coats each season. Last photos are also the two El Rosa off type seed coats. 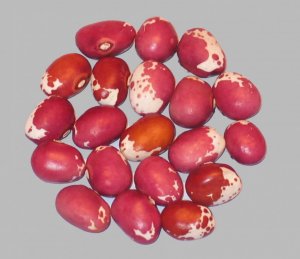 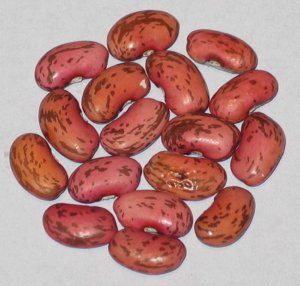 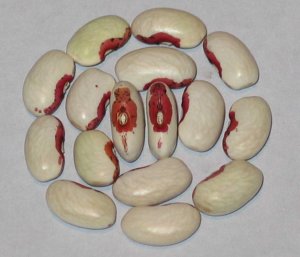 Russ's 2020 Bean Show
Day 9
​
Ernie's Big Eye - Bush Dry. Now you can see how this bean turned out for me this summer. Soil sensitive, the white to red ratio changes depending on the soil you grow it in. I first encountered this bean in 1978 after joining John Withee's Wanigan Associates bean network from Lynnfield, Massachusetts. It was donated to Wanigan by Ernest B. Dana of Etna, New Hampshire. It's an original bean of Ernie's that had it's beginning as an outcross.

Fagiolo Viola Di Assiago - Pole Dry. Obtained from Max Nunziata of Valpiano, Italy in early 2019. The bean did not grow as well this year and will try it again next year. The beans in the photo are about 75% of the beans I harvest of this vareity this year. 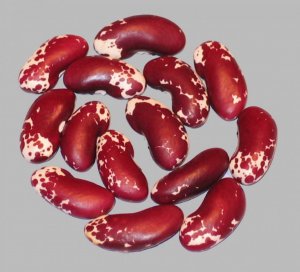 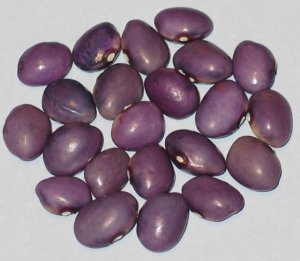 Fascination - Bush Dry. Well... bush is a loosley way to describe it's growth. It doesn't climb on anything and at the same time doesn't really stand erect either. Spawling vines. I found this bean in Pink Panther that I got from my Austrian bean contact in 2017. The pattern to me resembles many of the southwerstern beans like Zuni Shalako except this one is in black and white. The bean also produced a lavender version of this pattern this summer too (second photo). 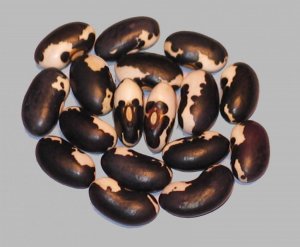 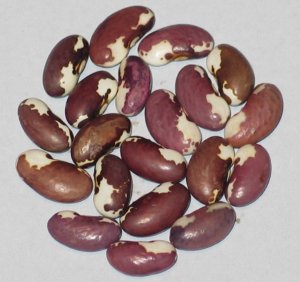 Fowler - Bush Snap. It's been said that the Japanese beetles don't feed on this bean either at all or hardly at all. So far as I've grown it more than once it seems to be true.

George's Bean - Pole Dry. An old baking bean from the UK named after one of the King Georges somewhere along the way. This bean did not grow well either for me this summer. I managed to scrap up enough decent looking beans for the photo. This picture is most of the seed crop. 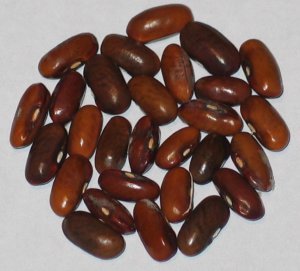 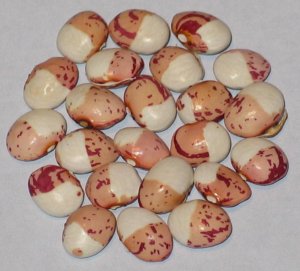 @Bluejay77 Facination and off-type does look like Anasazi to me too.

Thanks @flowerbug maybe someday I will have some seed that you want and I'll be more than happy to share. I appreciate it.

baymule said:
Thanks @flowerbug maybe someday I will have some seed that you want and I'll be more than happy to share. I appreciate it.
Click to expand...

only if you get some odd seeds come out of the Purple Dove. i will gladly take any odd ones back or split them with you or even just a few seeds as those are what i'm really hoping to find from all the interplanting i did with those this season.

i hope they do well for you. even as a dry bean they're good... sorry, i love to gush about my children...

baymule said:
Why purple podded? Because it took me over an hour to part the vines, look under, over, upside down and every which way for the elusive green beans in all the green foliage! AARRRGGHH!!! I wear a long sleeved denim shirt in the garden because I break out horribly from tomato vines and the bean vines make me itch. In our heat, I am a sweat puddle by the time I come out of the garden, so speeding up the picking process would highly interest me! LOL