ducks4you said:
@Bluejay77 , I think you are right, BUT, how to duplicate that?

I know this seems dumb, since Illini Sweet Corn was developed at the U of I in Champaign, and I live close by, BUT do you plant Illini Sweet? If so, Where do you buy it?
Click to expand...

I don't plant sweet corn. I don't even grow corn at all. I tried the pole beans on sweet corn once and it didn't work out well. Sweet corn is probably not sturdy enough for growing beans on. That is my guess. I just wonder if the native people used corn varieties that they would grind into flour. Some variety that was more robust.

From what I understand, They also gave the corn a nice head start. I don’t grow beans on corn at least I haven’t yet, but if I were to, I’d choose a sturdy corn say like hickory king and I’d let it get a good hold and start growing long before I planted any beans. I’ve read lots of literature on the subject and it does interest me, I’ve just never got roundtoit.

It's my understanding is when the first nations people grew beans and corn together. They had beans that had much lighter vines. I also wonder if the corn the beans were growing on were spaced farther apart allowing the corn plants to become much sturdier. Corn may have been planted three feet apart or some similar distance. Possibly they also didn't plant a lot of bean seeds around each individual corn plant.
Click to expand...

they were grown in clumps and not in rows.

reedy said:
Hello bean people. I've been absent for a while. Focusing mostly on other crops in my gardens past couple of seasons but chomping at the bit to dive into some new beans next year. I've got about thirty picked out just from the network pages, o my, that will have to be trimmed down a bit, just don't have that much space.
Click to expand...

hi @reedy and welcome back.

planting and harvesting beans probably won't return nearly the amount of nitrogen that you would think, you may want to get some early fall field peas planted and buried to help more.

also some beans just do not nodulate very well. i've found out the past few years that a fair amount of the difference i get for beans and how well they grow here is how well the plants nodulate in our soils.

Purple Dove (and other RL purple beans) continue to be the hands down winners even if they are Japanese Beetle magnets. i've taken to squashing the JB's and leaving them on the ground for fertilizer too. if someone wants to take those JB's from traps and see how they do as a fertilier i'd be interested in hearing about results of such an experiement. there are so mnay JB's around here that i think it could be a very viable natural fertilizer if it worked out...
Last edited: Aug 5, 2022

i grow an heirloom variety of popcorn called Ladyfinger. You may recognize it as the tiny white "amish heirloom" popular in the amish popcorn brand Yoders in shipshewana IN and Northeast indiana. theres another amish company in indiana that sells it also i cant remember the name.
. It is an early popcorn and is tasseling now, in 4 years of growing it wouldnt fall over for me until its fully dried down, and the offshoot stalks would be the ones to fall over. and it for sure could hold up pole beans early in the season, but i think it would be very tricky to time its growth with bean planting so the beans wouldnt out grow the corn and cause it to fall over.

Triffid said:
That's right, actually pretty much in the middle of the two counties in the city of Brighton & Hove, on the border of East and West Sussex. So I'd say, as the crow flies, we're directly south of central London. I live less than 200m from the sea and the plot where I grow the beans is about 2.5km from the sea.
Click to expand...

200m from the sea! Is the ocean amazing to swim in?

I've grown corn and beans together twice, once purposely and the second time not so much. Second time, the beans were semi runners not poles. My experience both times was that one always matures before the other, or at least needs to be harvested at different times to protect the drying seed from rot. So, harvesting the one usually means significant damage to the other. Last year when I needed to harvest the corn cobs I had to pull the beans off them- and they fell to the ground after that. Also the beans were a bit too shaded by the corn leaves so didn't grow as quickly as normal. Growing corn in blocks as I do only complicated things further.

heirloomgal said:
200m from the sea! Is the ocean amazing to swim in?
Click to expand...

brrrr! i think it might be kind of brisk there.

Location
SE Indiana on a narrow ridge above the Ohio River

Thanks everyone for the welcome back, I think it's been three, maybe four years that I've been gone. I know for sure it was before the covid thing.

On growing beans with corn, I've done that many times and still do, but differently than most people. I agree the native gardeners probably grew in clumps or hills rather than in rows like we generally do now. If you want to grow beans in a corn field, you need an actual corn field bean. That's a bean that likes the shade in the corn field. The only one I know for sure likes growing like that is Ohio Pole. But Ohio Pole, in my climate is large bean with giant vines. It needs a giant corn like Cherokee White Flour or Hickory King to grow on. Some greasy beans also tolerate the shade and about any bean can be grown along the edges of a corn patch, just on the outside couple of rows.

I don't grow sweet corn either, but the woman loves it and when she retired, she wanted to grow her own, thus I lost some of my garden space. I'm working on developing my own flint corn that resists fall army worms. I almost always grow beans on the stalks, but I don't plant them together. Instead, when the corn silks start to dry or even after the corn is harvested, I strip off the leaves and stick some bean seeds at the base of the stalks, works great. Sorghum works for this too, it has even bigger and stronger stalks.

Also planted at the same time as the beans in this picture is mustard (the little sprouts) but something else like turnips are good for this too. I'll thin the mustard and beans as necessary. The stalks will dry and get stronger. After the beans are done what's left of the mustard is winter hardy and will be left for seed next spring. 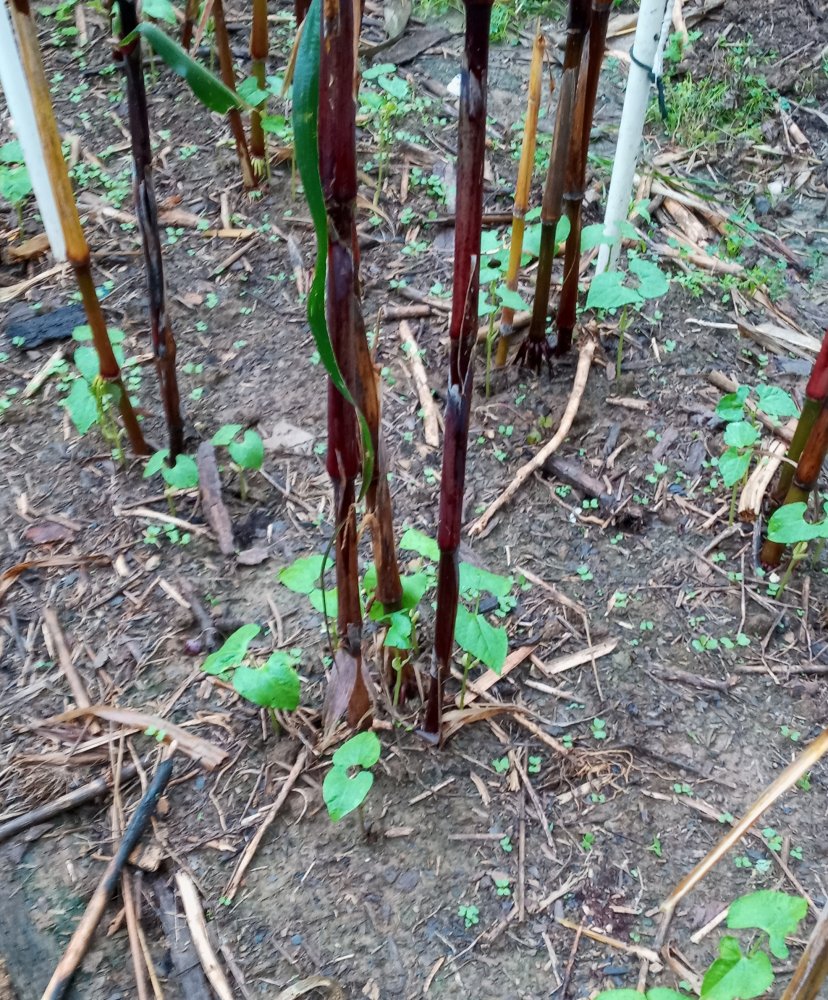 Below is my first row of corn and beans and I think I will be duplicating that in the future. The bush beans are thriving so much, that I harvested 21 beans yesterday and THIS was what I harvested this morning. What I want to know NEXT is how long these bush beans plants will produce. I have other beans up at various stages, but I never had such a good bean harvest before. Thx!!