Pulsegleaner said:
Actually, while in the car during out nightmare of an afternoon (rather not go into that). Dad clarified that they had just said it was going to go down into the 30's (not below freezing, just into the thirties. for the areas NORTH of us! and even THAT was a maybe! Of course, this was AFTER I did the harvest. But the critters were beginning to attack the tomatoes anyway, so it's probably alright. And at least the plants themselves didn't have to come in (by now, the bean plant is so big that I'll need Dad's help when it actually comes in.) Ditto the citruses; the sudachi is now so tall I'll have to put it on the ground and push it to get it in the door!
Click to expand...

Well, @flowerbug, it was already almost half way there when it went out. And since I define "put it on the ground to get it in" as simply being too tall for me to carry in in my hands, and I'm over six feet tall, that really isn't that high of a bar to pass. It's not like the Bird of Paradise, which really IS too tall to get out the door (which we discovered when we had to take it out because we were having the living room and dining room re-plastered and re-painted AT THE SAME TIME (we normally do one or the other, and move the stuff back and forth.)

The real star players are the mandarins (the ones whose name I can't remember, but are basically like a seeded version of the Dekapon), Over this summer outside, they've gone from tiny spouts barely big enough to count as seedlings to semi respectable heights (guess all that sun did them good.) Pity they're the only ones I KNOW can't hack it outside over the winter (the Yuzus and Sudachi both have Papeda genes, so they're good down to fifteen below Celsius, and I think the Shiwukasas have some as well.)

And I may want to go slow with the tomatoes as they ripen. It occurs to me that, amongst the seeds I threw out in those pots over the years was probably my package of Lycopersicon glandulosum , which ALSO would have striped green fruit, and ISN'T edible. So I should probably go cautiously not knowing where those seeds came from.

Okay, check that, I just looked up L. glandulosum (syn. Solanum corneliomuelleri) and it looks NOTHING like what I have (it's a LOT fuzzier, and a lot duller skinned). So I guess I'm good.

ducks4you said:
Lucky!!! I can't keep My family away from them!!
I threw away my first attempt (2022) of saving Cherokee Purple seeds. Didn't think I fermented them right. I took one of the growing collection of laundry detergent measuring cups and started fermenting again. I took 2 tomatoes that were rotting already. I have a nice, pink skum going, and it's on the steps outside. Been going for several days, so I will probably do the first rinse today and finish to start drying in a few days.
Click to expand...

What do you think you did incorrectly with the fermenting?

Well, here is the harvest, such as it is. The solid green cucumber is Russian netted, I think (for some reason all of them have that long pointed unfertilized nose at the end, which Russian Netter, being a round cucumber, shouldn't have. It's really becoming a problem, especially since the animals appear to like biting it off and letting rot get in.

The Borneo Jungle Cucumber is the striped one (which I am more and more convinced is actually some kind of cucamelon rather than a true cucumber.) 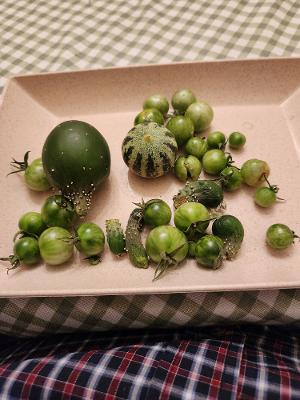 Buha Entimun Betu is what came up when I looked around for info about the Borneo Jungle Cucumber. The write up describes it as more of a melon than a cuke and the photos showed it could get as large as grapefruit. Do they taste good? I wonder if it is in the same camp with the Armenian varieties, like the Painted Serpent I planted this year. (I got 1 large one to grow! It's in a pot/tub, which I didn't fertilize, & didn't have in a great place, so I'm not complaining! If I can get it to seed it'll have been worth it.) A cucumber that tastes like a melon, though in this case vice versa. It's a very pretty little thing! I like the stripes. Dosakai looks similar, though it's a Cucumis sativus. I'd be surprised if it's a Melothria sabra because as far as I know that species has no varietals. Possibly a Cucumis melo?

Those tomatoes certainly do have the striped look to them; I was surprised to learn that Green Zebra cherry (grew it in 2020) has no relation to Green Zebra.
Last edited: Sep 24, 2022

Garret Shantz said more or less the same thing on my other seed side. I should probably check with him to see how they did for him.

If it IS a melon, then it would be sort of like the Armenian, though I suppose a bit more like the Carosello type ones of Italy, given it is round.

Borneo isn't all THAT far from India (at least when compared to the distance to, say America, so I can easily see a Dosaki like cucamelon making it there.

I suppose the real surprise is that something from such a hot climate could GROW and FRUIT this far north.

heirloomgal said:
What do you think you did incorrectly with the fermenting?

I didn't really ferment them. I will throw those seeds into one of the beds. I might get a few volunteers. I will still have Plenty of seeds.

Yet another tray full of wee peppers to be de-seeded today.

My nail beds and cuticles are on fire from the last 3 this morning. Just cant work properly in the 30 mil gloves.

heirloomgal said:
Yet another tray full of wee peppers to be de-seeded today.

My nail beds and cuticles are on fire from the last 3 this morning. Just cant work properly in the 30 mil gloves.
Click to expand...

are you just removing the inside seeds to be fermented or are you doing something else?

Just scraping the seeds out so they can dry on paper.

heirloomgal said:
Just scraping the seeds out so they can dry on paper.
Click to expand...