Got it! Carosello Barese! I think it's a landrace and some of them look EXACTLY like yours! Including the stripes!
Last edited: Oct 29, 2022

heirloomgal said:
Got it! Carosello Barese! I think it's a landrace and some of them look EXACTLY like yours! Including the stripes!
Click to expand...

Like my Borneo, Carosellos are actually a cucamelon rather than a true cucumber. But thanks for reminding me that those do have fuzz.

So, I guess the first thing I need to keep in mind is that the two vines are genetically distinct and need to be saved separately. Not that I wouldn't do that anyway.

I've been looking around the seed sites, keepin an eye for interesting things. I got an email from a company I ordered from last year, showing me their "New for 2023" seeds. It's a clever move! I couldn't resist and after looking through the 15 pages I placed an order. Many things I've never seen or heard of, so I'll be excited to get growing those when the time comes. I actually ordered a below ground radish, which I've never done before. It's light green and rosy pink, and I haven't had cooked radishes in an age. And I used to really like them.

Thank goodness I have this distraction, and the enjoyment seed shopping provides. My version of retail therapy. I'm sort of reeling. My neighbour directly across passed away from SADS, a healthy mid aged man who had just moved his elderly parents in to care for them. It was a close family, and I heard the mother outside talking with our other neighbour (she was there collecting her things to stay elsewhere) and the sounds of agony she made just about pulled my heart out. They come from a culture where they are much more open about feelings of pain. The wailing and crying was more than I could bear. This morning I learned there was a triple homicide 5 minutes from my home, mom, dad & teenaged son. I pass this home daily. So shocked, and the scenario I imaged that likely had unfolded , given statistics, wasn't the case. It was much worse. Just so hard to believe, and the whole community is completely shaken.

Well, back to the seeds. Because seeds are a promise or hope for new life. And that is pretty much what I need right now, because my mind keeps drifting to thinking of this family. I pray they are all okay now, wherever they are.

I can't believe it, but the eggplants are ALL finally processed for seed. That took so much longer than I thought. This was my first real grow out of eggplant and I'm impressed with how well they did considering they were all in not very big pots, and it was an fairly early fall. I collected lots of seed. It was great to have a vegetable that can sit around for SO long without rotting into a mess - like tomatoes do.

The hot peppers are probably not faring quite as well, but I'll see when I go through the little buckets. Just looking at the piles of them there - waiting - make me want to find a drawer to clean instead.

Count Dracula turned out to be a WAY above average pepper variety. Even now it's loaded with fruit again and the plant is as perfect as when I set it out in June. It's surprising. And I've left it in the sun room where it gets darn cold every night. Been awhile since I was so impressed by a hot pepper variety.

Had a nice surprise in my 'mulcher' pile. The last quilquinna plants that I gave up on for more ripened seed heads, since it was so late in the year, ALL WENT TO SEED! I found the dumped out pot contents covered in fluffy white heads. Total shock! You'd think they would have done that in the greenhouse!

Yes, I think that was it.

You shocked the plant and it went to seed.

heirloomgal said:
Had a nice surprise in my 'mulcher' pile. The last quilquinna plants that I gave up on for more ripened seed heads, since it was so late in the year, ALL WENT TO SEED! I found the dumped out pot contents covered in fluffy white heads. Total shock! You'd think they would have done that in the greenhouse!
Click to expand...

Maybe that was the plants' way of giving you the raspberries, for daring to throw them out.

Hey, plants have feelings too ya know.

digitS' said:
Yes, I think that was it.

You shocked the plant and it went to seed.
Click to expand...

I think this is indeed it!

Now if only I could find some way to get this technique to work for other things...

Well howdy. I had picked up the quillquinna plants to go sit on the back step and pluck the seed heads in comfort. I threw them back when I was done a couple days ago. Today I had to dump another pepper plant on the 'to be mulched pile' and, well, here we are again. I left the depotted plants in buckets this time by the back step....just in case there are more surprises. 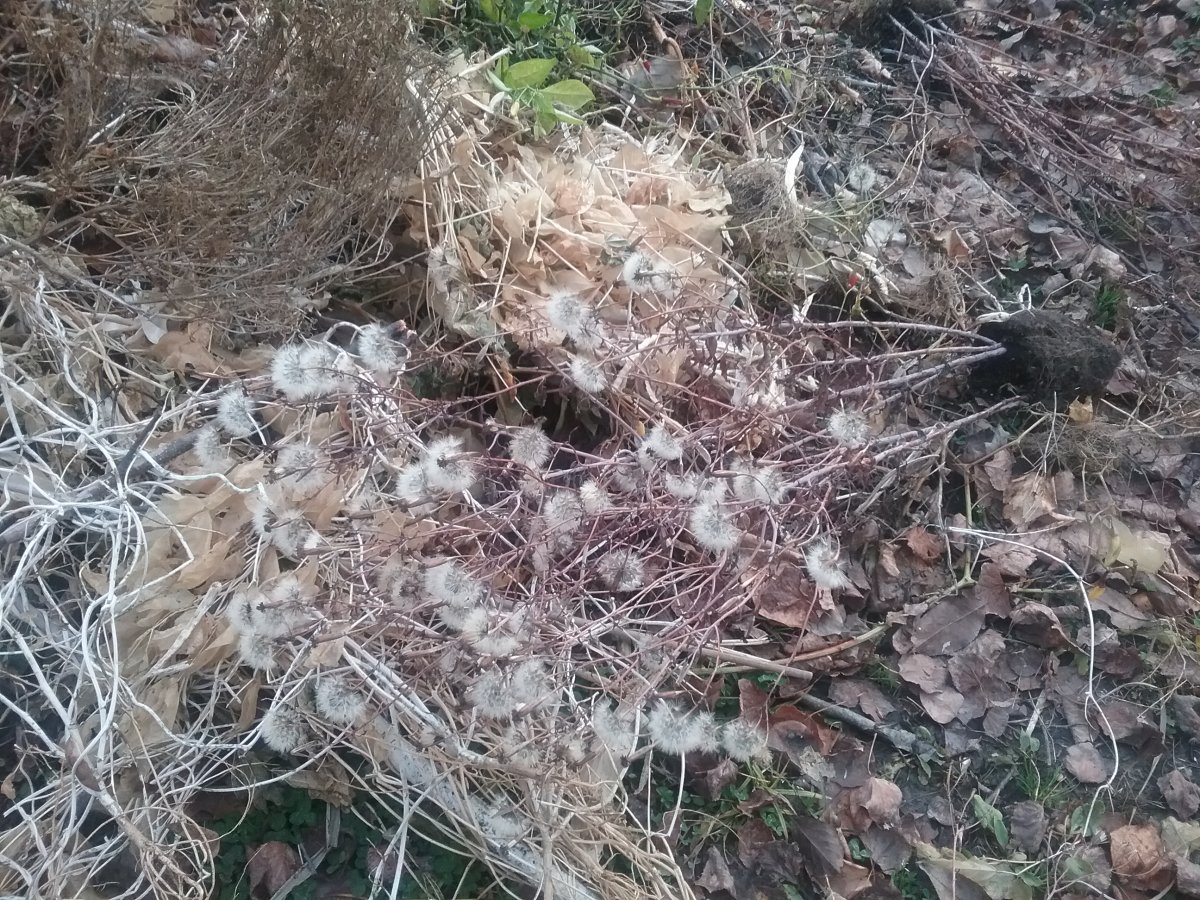 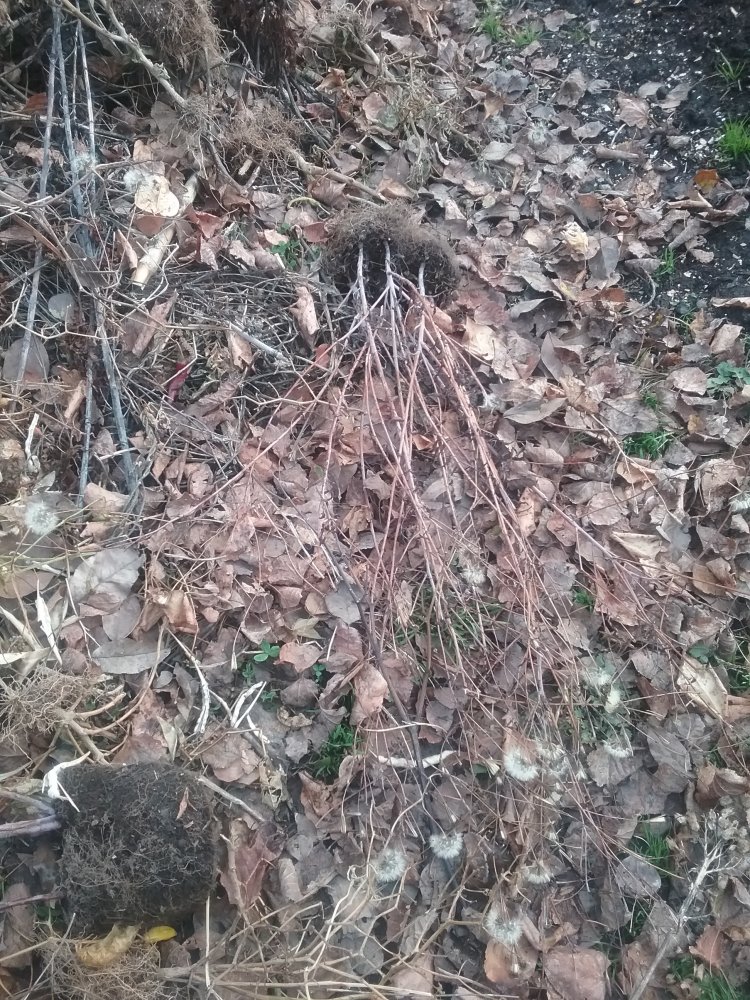 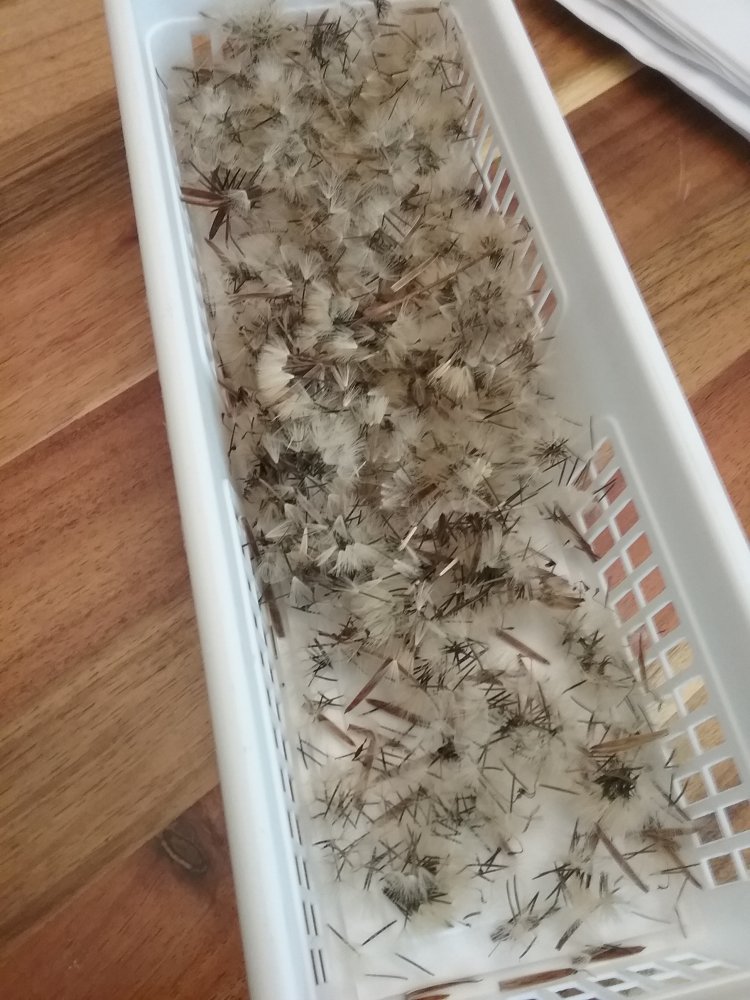 A great picture of why saving flower seeds is increasingly not for me. More on the ground than in my envelope! This is the dumped potted soil pile. 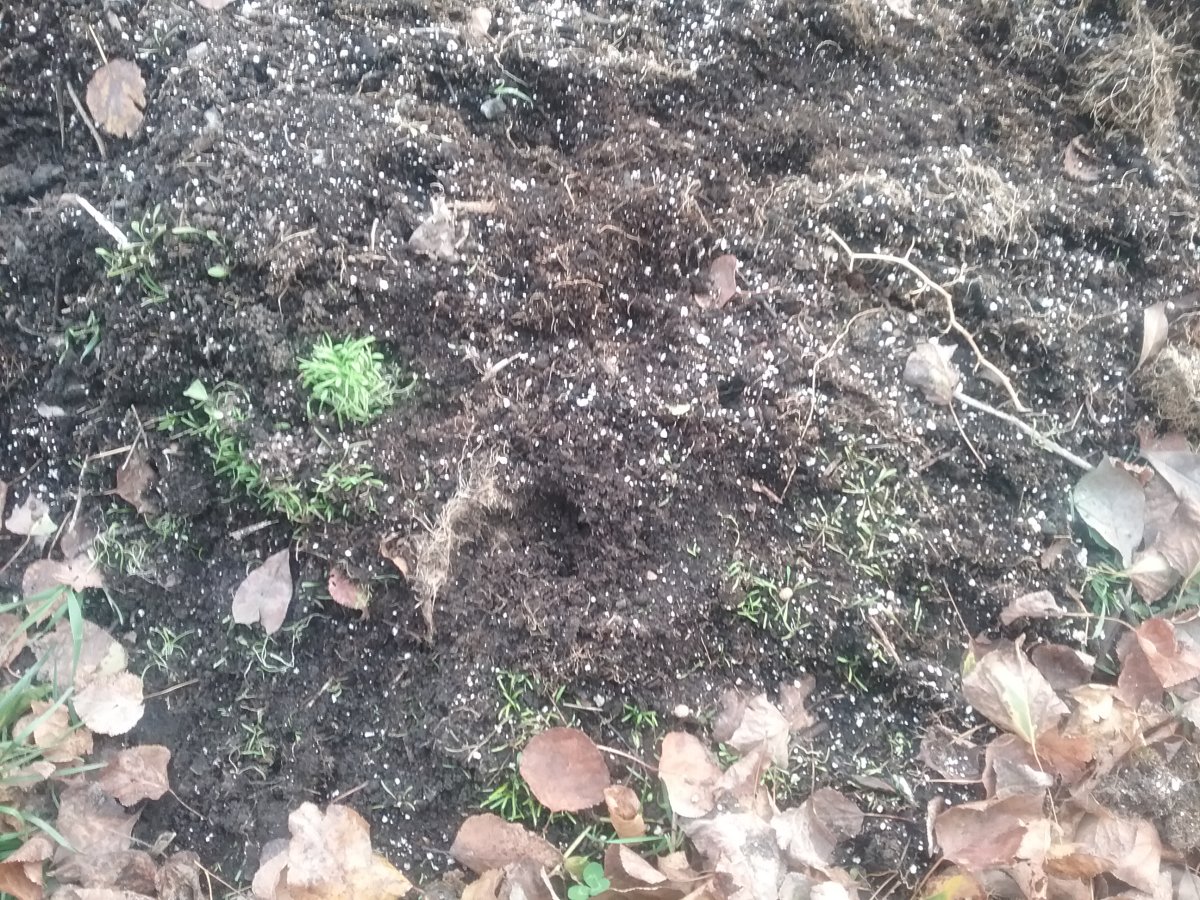 Last night, I noticed that the second Borneo cucumber had started to go moldy on top (I was afraid it might, when dad harvested is, he picked it way too far down the stem (I tend to like to leave a little stem on ones I plan to keep, as the dying stem provides a block to any fungi or germs that might get in the broken part. So I had to open it and get the seeds.

Whether I got good seeds or not I honestly can't tell a this point. The gunk I pulled out is currently too foggy/misty for me to get a clear look at any of seeds (I can see they are there, but can't tell their state of maturity).

I HOPE there are a few good seeds, compared to the last one, I managed to get a bit more of this one into my mouth, and this one tasted a lot better than the first one did (reasonably crispy with a nice lemony-melon-y balance to it. And if I DIDN'T get good seed from it, I can only hope that another seed from the same parent fruit is in the last packet of seed I got from the original seller (I got four and planted three last year, in case of total crop failure)

I was over at Green's (formerly Mrs. Green's), our local organic market/health food store chain. Primarily, I was interested in some good fruit (as well as casing out any new bottled beverages that might have showed up) as the fruit I'd gotten the day before and earlier were not pleasing (the blood oranges were a strain I found both too weak AND too bitter in taste, and the mandarins from yesterday are too sour.) I didn't actually FIND that much in the way of fruit (the days when they had excellent small production citrus are long gone). However, on one table they had three miniature watermelons (each marked as being from a different supplier) I took one (the other two were marked as seedless, and I know seeded melons taste better generally and brought it home (I was so committed to it I even agreed to still take it after the woman in front of us knocked it off the checkout counter and cracked it.
I have now consumed between 2/3 and 3/4 of it. It's okay, though only the core is really sweet (it is however, SUPER juicy; my shirt front was SOAKED by the time I was done.

As for seeds, it's a little hard to tell. Originally, I was finding the odd tiny tan seed, so I assumed this was a tiny seeded melon (like the one I grow) However, as I was cutting it, one larger, black seed showed up (the knife nicked the seed coat, but seems to have done no damage to the insides, so it is probably still viable). So I am inclined to think the tiny ones are aborted seeds, and that this was also supposed to be a seedless watermelon that happened to get one or more seeds going (since I haven't eaten the whole melon yet, I can't say if any additional seeds are in the chunk still left to go.)
I also got an odd looking squash (possibly hybrid) that might be of seed interest. Color wise, it's an acorn (which is what it was being sold as), but it's very long and thin, almost more Delica or Zucchini shaped (if Zucchini had ridges).