I doubled the recipe, omitted the nuts and raisins and added a teaspoon of ginger. I gave one to a neighbor and she doesn't like raisins.
Click to expand...

You had me until it listed "canned" pumpkin. It looks like a good recipe to adapt for use with a good, dry winter squash, though.

digitS' said:
DW has drafted me to make some baking powder pumpkin bread. She has to get over this idea that our winter squash is all for bread and pie. We can't fill the freezer with these things! 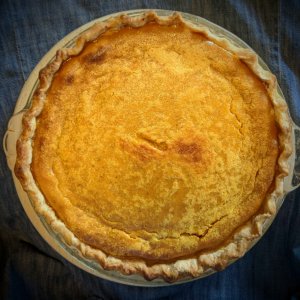 Well, that would certainly solve the freezer issue, Grandpa.

Zeedman said:
You had me until it listed "canned" pumpkin. It looks like a good recipe to adapt for use with a good, dry winter squash, though.
Click to expand...

That’s what I did. I used my pumpkin.

baymule said:
We had our 3 granddaughters for the weekend. The 13 year old spent one night, then left to go stay at friends houses. So the 4 and 5 year old helped me pick out a Giant Pink Banana Squash to make a pumpkin pie. @digitS' I told you if I made a pie, it would get its own thread and here it is! LOL LOL

We cut it in half, then cut the half in half, lengthwise. We scooped out the seeds to a chorus of THAT STINKS.

Then I had to peel it. I took a half and cut it in slices. A sharp knife soon removed the rind.

I cut the slices in chunks and put in a pot to simmer.

The other half I put cut side down in an aluminum pan. I added a little water and covered with foil to hold in the moisture and steam the squash done. I remembered a thread on cooking a rumba squash, I don’t know if I did it right, but it got cooked!

Then with some expert help, we scooped out the cooked squash.

Then we measured out a cup of squash and a cup of heavy cream. Fro the rest we followed Libbey’s pumpkin pie recipe. We poured it into a pie shell, home made pie crust, and baked it. Mmmmm it sure smelled good!

The little girls could hardly wait, but I told them they had to eat supper first. We made pizzas on flour tortillas withmy home grown/made pizza sauce, pepperoni and cheese. Our son had come in and our hay guy delivered hay, mentioned that his wife was gone, so we invited him to supper. The grown ups got onions and jalapeños added to their pizzas.

It was delicious. Best pie ever.

The only criticism I can offer is that the water added in cooking made the squash purée too goopy. The other half of the squash, I roasted it dry, scooped out the squash and it is in the refrigerator. Haven’t had time to try it. We’ll see how that works and if it is thicker and not goopy.
Click to expand...

This is one of the new squash I'm going to attempt growing next year. Heard they were incredible. Hope so!

Myrthryn said:
This is one of the new squash I'm going to attempt growing next year. Heard they were incredible. Hope so!
Click to expand...

Give them plenty of room! I picked the harvest in September, thought I was done. We got some rain, it cooled off and the squash took off. The vines have covered a third of the garden and is going over the fence. There are 20+ squash out there, probably 14 of them are big and will make it to maturity before frost. This was my first year to grow them, have already saved seed!

38 degrees this morning but no frost. I’ll have to pick the squash today.

I doubled the recipe, omitted the nuts and raisins and added a teaspoon of ginger. I gave one to a neighbor and she doesn't like raisins.
Click to expand...

I have already put away enough pumpkin for 6 pies. I have marching orders to make your pumpkin bread soon.

Yesterday I cooked 2 of the squash that had bad spots. I got 4 cups from one and put 4 bags in the freezer. I just put the other one in a baggie after scooping and put in the refrigerator for pie and pumpkin bread.

The sheep got the cooked skins, seed pulp and trimmings. They went nuts for it! If I had a less labor intensive way of preparing it for them, it would make a great winter feed and treat. I’ve done searches for beet shredders but all I found were a very few, mostly in museums and one in England. Guess nobody raises big beets or squash for their livestock any more.

One of the squash had a seed that was actually sprouting inside the squash! 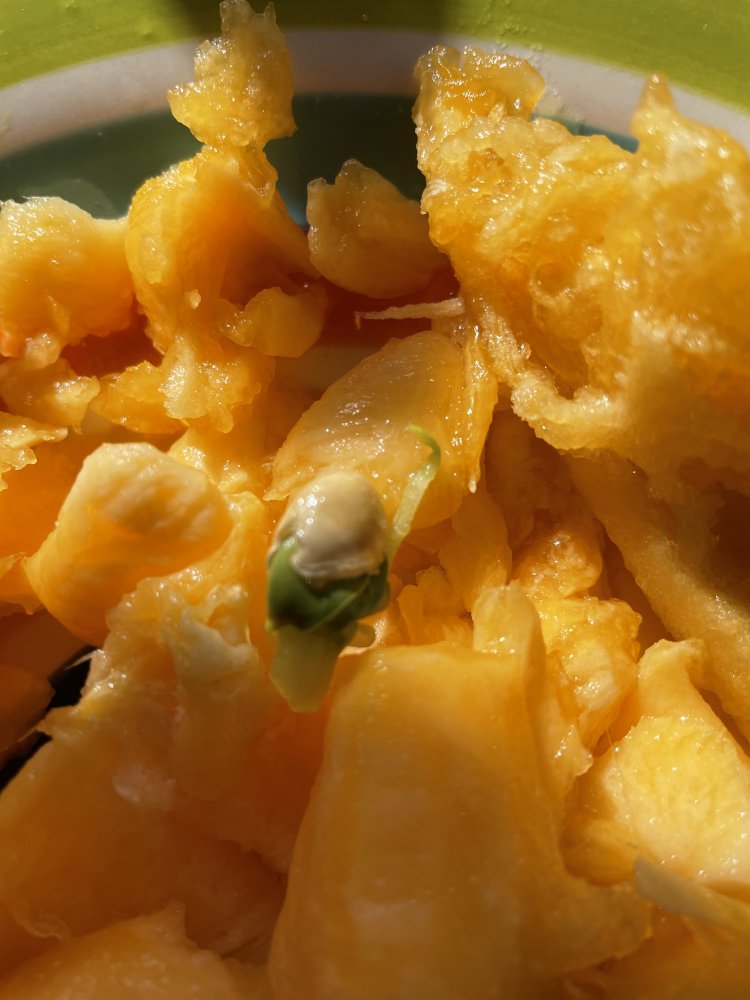 We picked the last of the squash that was in the garden weeks ago. Since then I have rationed them out to the sheep. I chop them with a machette and the sheep gobble them up. We got 25+ from the last picking, they are on the screened porch.

The rest of them are in the house, in a bedroom. I put cardboard on the floor and they are curing nicely. I made pies yesterday. For Christmas, I made my daughter her own pies with a non gluten baking mix because regular flour tears her up. Then I made us one and it is already half gone. I bet it does not survive past tonight. LOL I have frozen processed squash in the freezer, think I'll make another pie or two so everyone else can taste my GPBS pies at Christmas.