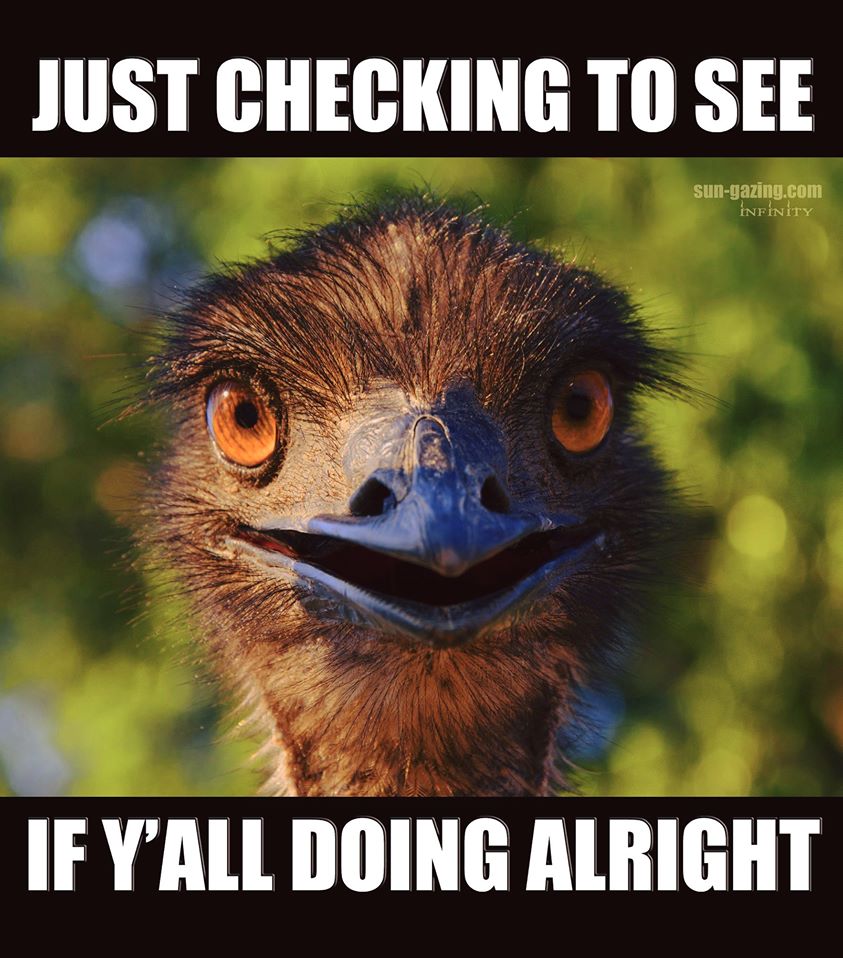 Kidding aside... DW & I are doing wonderfully, binge watching all of the traditional Easter movies.

Am I alright? That is yet to be determined......according to some.

We are doing fine here, it’s been a productive weekend. Hope everyone is doing great!

seedcorn said:
Am I alright? That is yet to be determined......according to some.
Click to expand...

We are ok. Shelter in place is pretty much like hunkering down during a hurricane. Only the hurricane blows through and goes away. This durned coronavirus hurricane just wont leave! LOL We stay busy on the farm, it’s not much of a hardship for us.

yes, we're ok here. i made Easter Dinner and did the dishes and we found things to laugh about. i went outside and took a few pictures, i think one is worth posting to the website when i can bring myself to get a round tuit.

It's been nearly a month since Carol Dee asked if we are doing OK. Today I feel more apprehensive than usual, just a general anxiety, which is pretty rare for me.

Actually, my barely-teen grand daughter announced this week that she feels like she is really a boy, inside. She would like to be referred to as "he" and "him", rather than feminine pronouns. That is all that is being asked for right now. I have noticed for several years that she (he) is not thrilled with all the girly things that is usually exciting for girls that age. She is athletic, blunt and a little obnoxious. That sounds like a barely-teen boy, right?

I know that this could be a phase she is going through. Figuring out how much advantage boys have over girls in so many areas, she was depressed about growing up even 3 years ago. Things could change with time. I don't want her to burn any bridges while she figures herself out.

I am still trying to digest this, fearful for what it will mean to her in school, in trying to get a job later on, in all aspects of life that we take for granted.

And, it's not "my problem", really. I will still love that child no matter what happens. The pain and frustration she will go through will hurt me, too, though.

"I feel your pain" is not just a catchy phrase.

athletic, blunt and a little obnoxious.

Sounds like a girl to me. Blunt & obnoxious gets a boy into a physical fight-until it’s beaten out of him. At that age, girls are more athletic as well.

Don’t envy your situation or her parents.

Sort of reminds my of when my teenage niece said she was lesbian, even had a girlfriend for a while. Her parents gave her room and let her work it out. I think that was a phase, she did eventually marry a guy. What is going on in their private life is their business, I'm not going to ask. In any case, she is still family and I care for her. Her husband is a good guy too.

That stuff happens. It can be hard on the person and the family. Some members of our society can be judgmental, hateful, and vindictive. That's not going to change that person, just makes our world a little crueler. I've known people to move to different parts of the country so they can be accepted for who they are. Good people.