The First Tomato seed in the Mix, the First in the 4-packs: 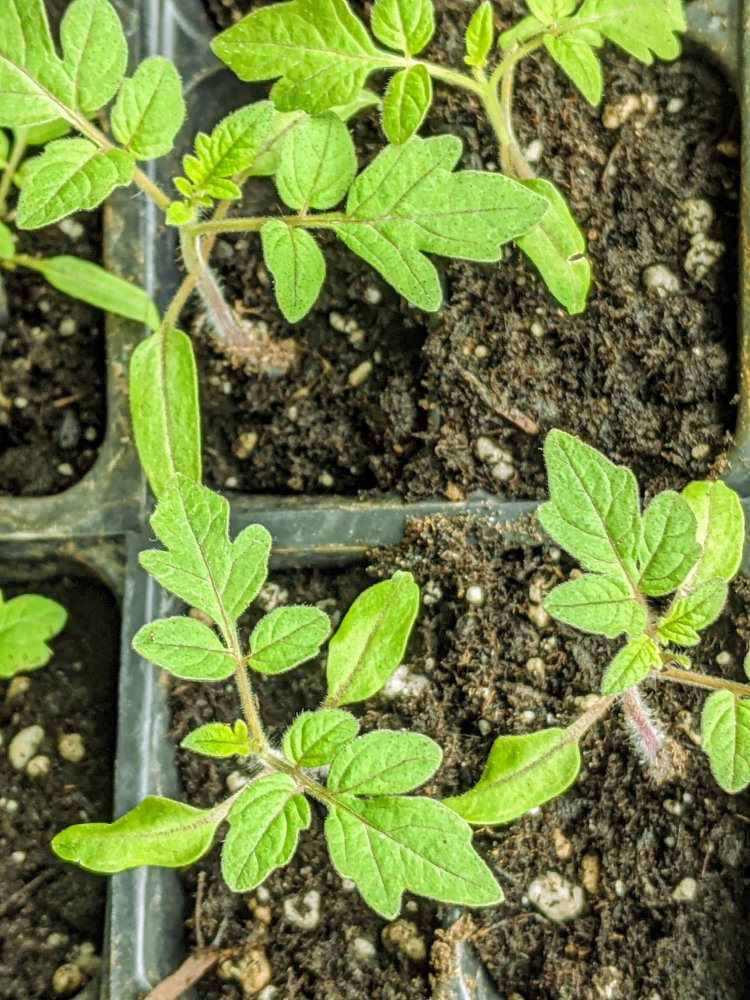 Steve
needs to move some sweet peppers, next

I started some seed yesterday. First off was the Zeedman eggplant and then two more varieties. Then some misc squash, I only had two old tomatoes seeds, and some other things.

I switched back to peat pots and boy have they decreased in size over the last three years. I had two six packs from three years ago and bought two more packages at Wally's.. Same brand, way different size.

Speaking of a change in size, @Rhodie Ranch ...

The lowest weight in 20 years is no longer a reality. However, the15#of weight gain now that Spring is here, maybe. You see, with an expanded table of plants in the South Window, in front of the PC is no longer a comfortable place for me!

I knew that this weight gain was gonna cause me trouble ... 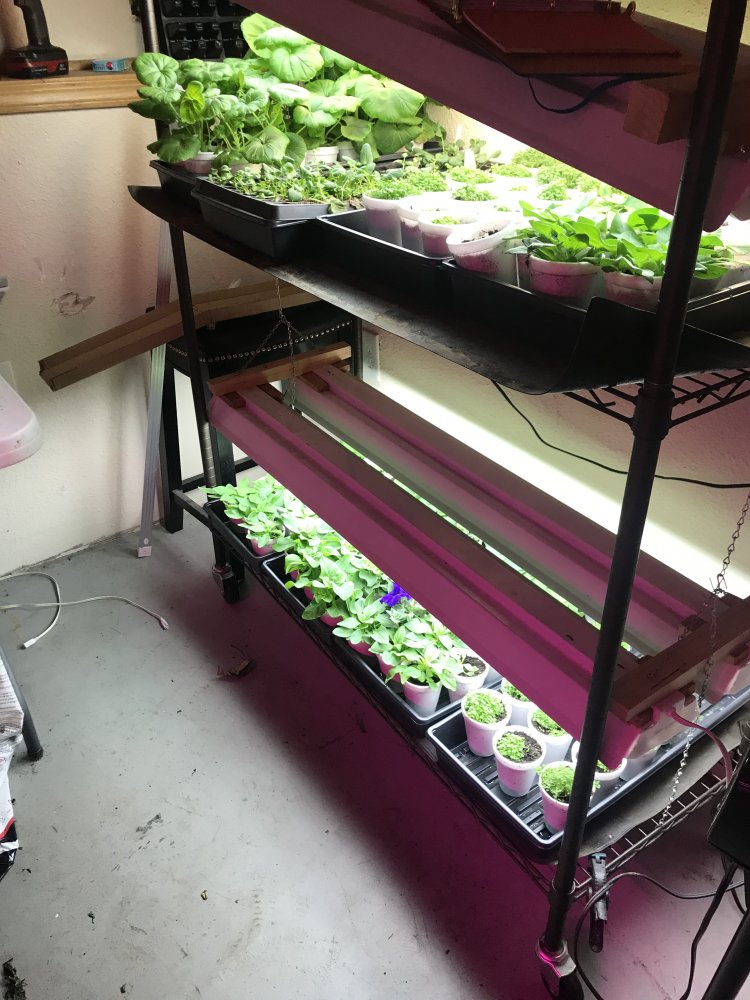 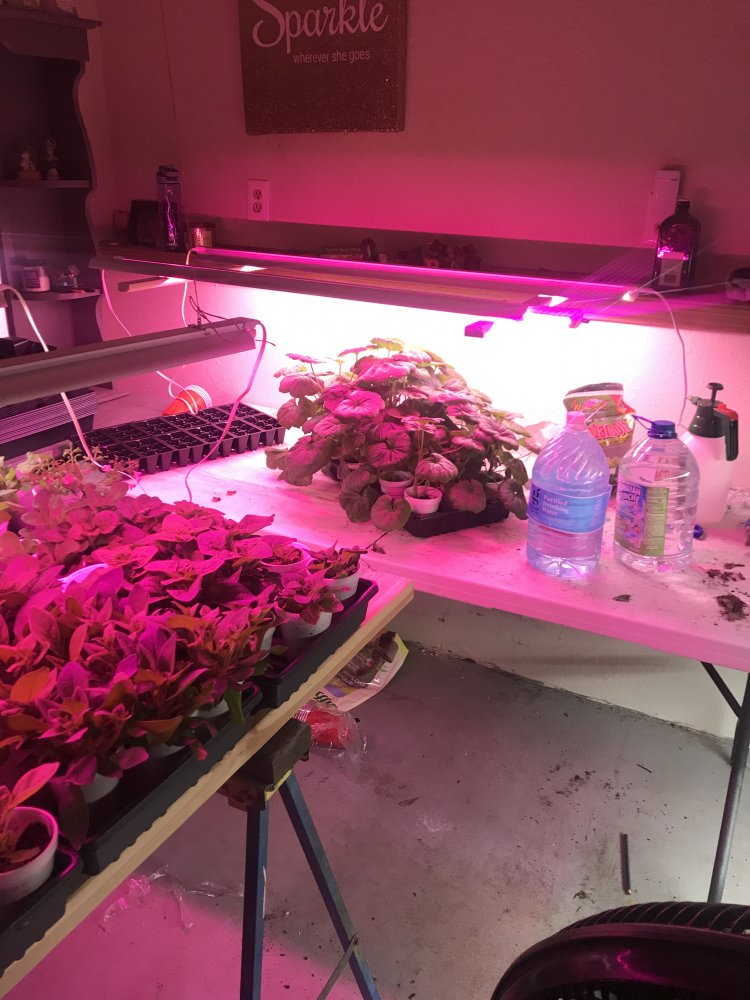 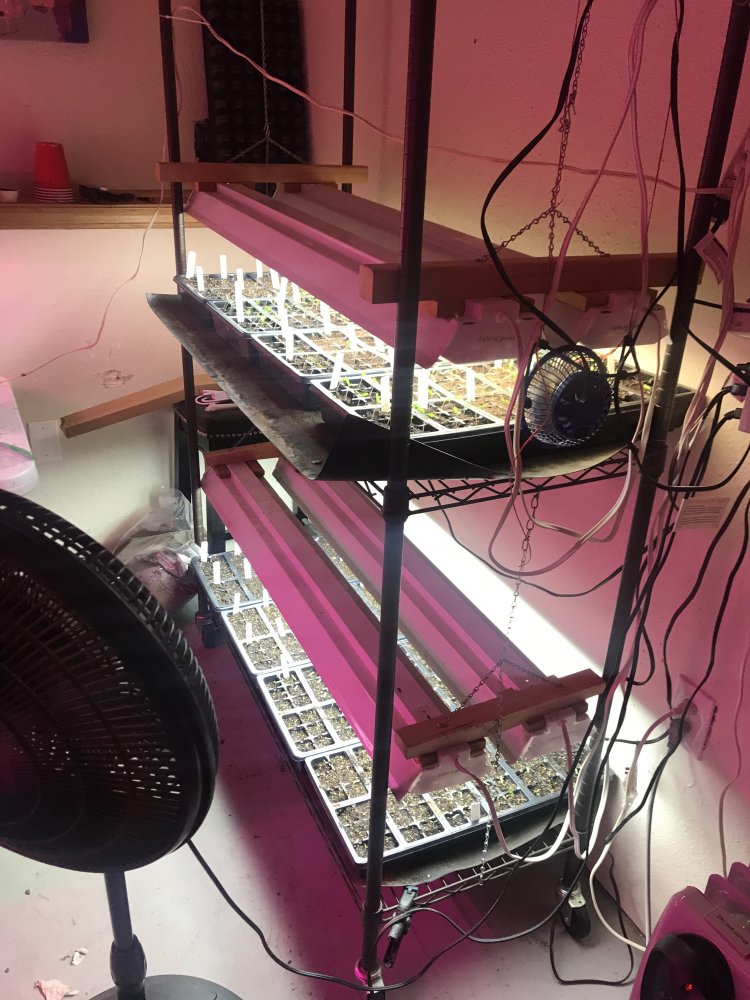 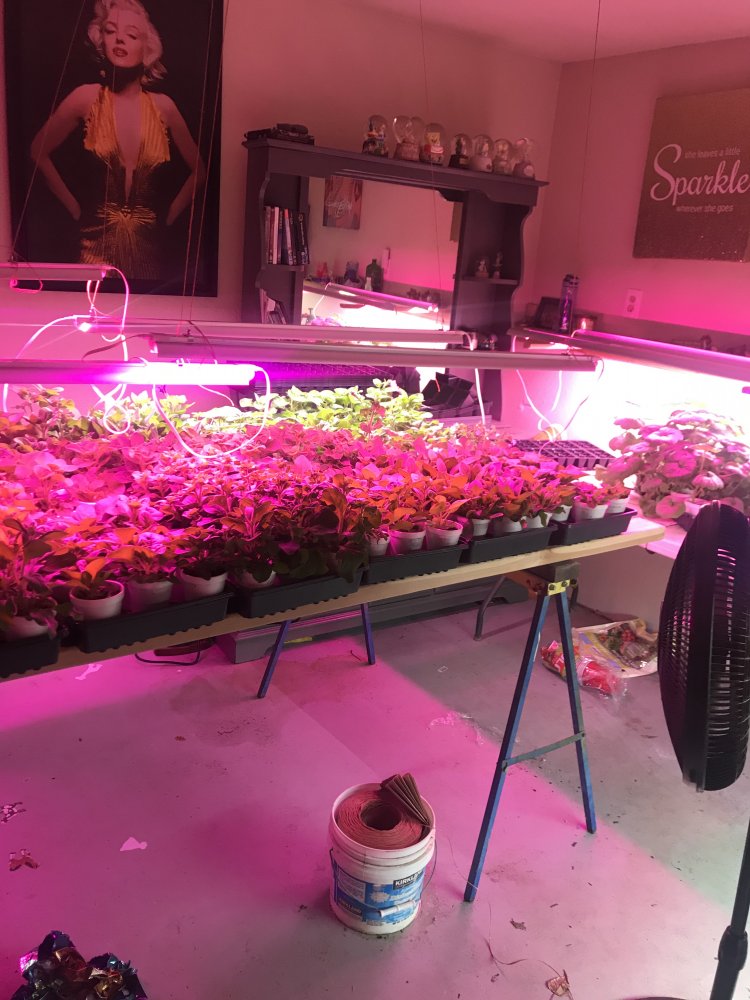 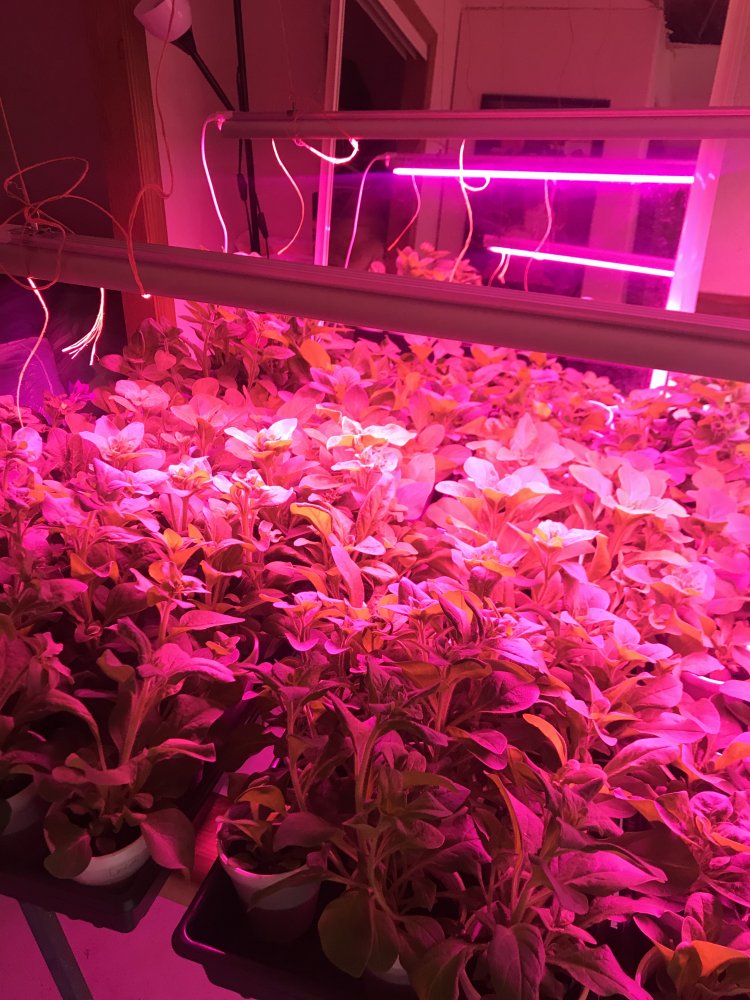 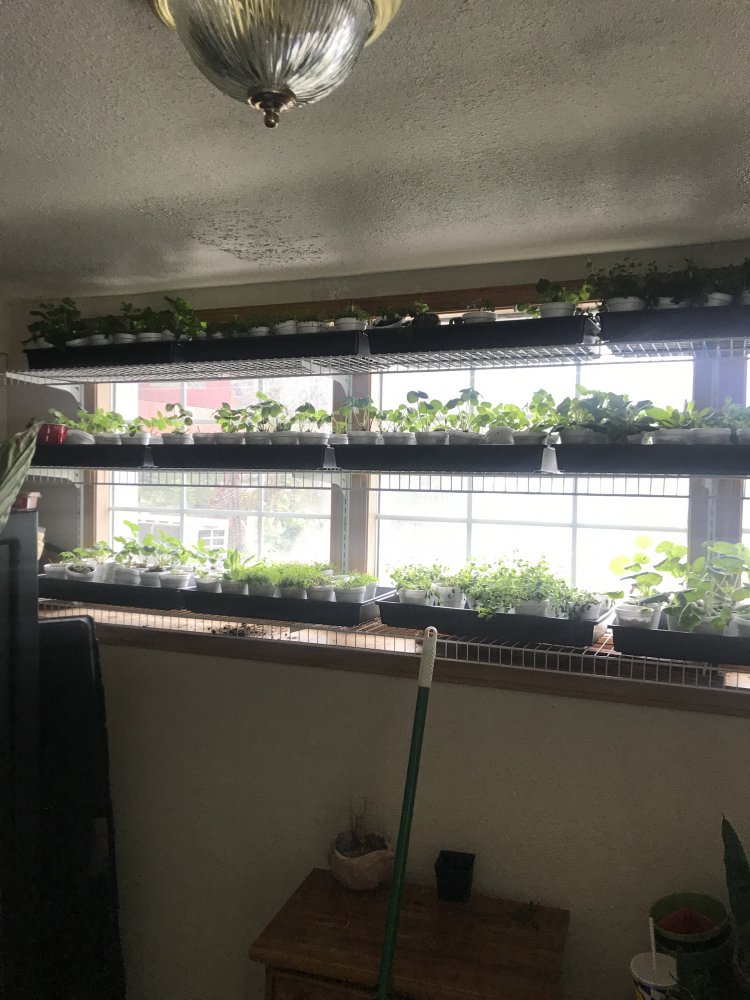 we have flats of tomatoes on the top seed mat and peppers and marigolds on the bottom mat. DW has purchased the led grow lights and is already at max capacity with 6 lights. Also have flats of plants in our sunny south window which is full also. With my injured left leg and also right hand break I am not much help. I have got to get out to the greenhouse and figure out a heat source so we can start moving stuff outside pronto. DW has really bit off a huge job for herself this year, she thought that I would be more help for her but a haven’t even been given the ok from the dr. To start putting weight on my ankle yet. It seemed like such a great idea at first.

Everything looks fantastic. I also have trays and trays of plants, but I think you have me beat.

Okay, @Collector is probably out moving stuff around in his greenhouse or, he's fixin' to do so real soon!

I've held off on posting this for weeks, not wanting to hurt his sensibilities but now, it may serve as a warning to TAKE GOOD CARE. 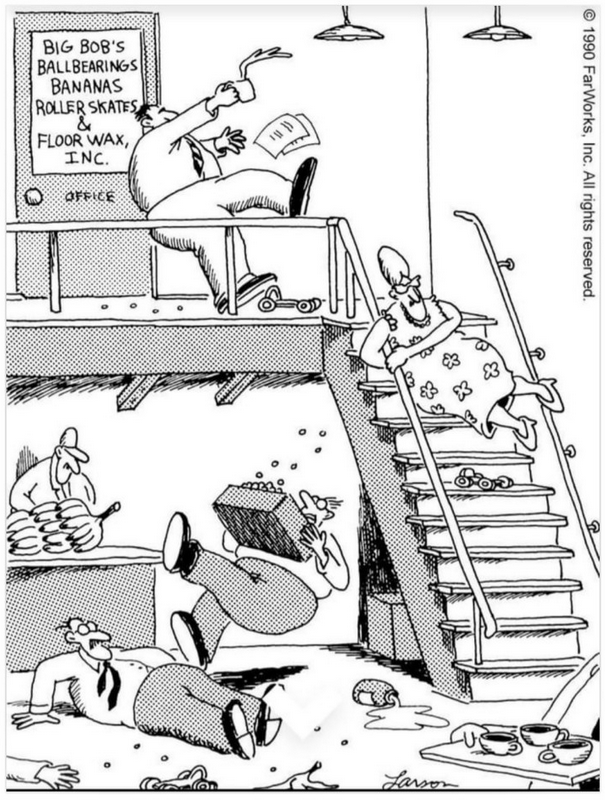 @digitS' , I resemble that cartoon. I do not feel like my coordination is lacking at all but it seems like I have had more than my share of injuries in the recent past. Maybe I just get discombobulated once in awhile lol

PS I would not fare to good working at Bobs.

You might be surprised, @Collector . I won't recommend it to anyone but you just might be in a very careful state while at Bob's.

I know that I have related this but I was once asked by a nurse how often I fell annually. Somewhat young when I began having daily problems walking, I was still very active, at least, part of the year.

She was poised with her pen, I thought a moment and decided 30x was about right. I didn't fall once a week, unless it was the busy season . She said "Good Heavens, you should be using a walker if it's that often!"

But, you see, I was falling in a field, the middle of the lawn or on a carpeted floor. I wasn't threading my way through debris or brush. Two things I finally learned was to never, ever look over my shoulder while walking. It was almost a guarantee that I would stumble. Criminy, we need to be as sure-footed as a gazelle to turn and look back while walking The road ahead may be perfectly level and it's still easy to stumble.

The second thing that I learned was to slow down. Think slooow. Remember Tim Conway as the little olde man on the Carol Burnett Show? Even if he happened to fall down, it was in slow motion and he would stand up, unhurt (much to Harvey Korman's amusement ).

digitS' said:
Okay, @Collector is probably out moving stuff around in his greenhouse or, he's fixin' to do so real soon!

I've held off on posting this for weeks, not wanting to hurt his sensibilities but now, it may serve as a warning to TAKE GOOD CARE.

that would be a fun place to lose your marbles and pick up a few steelies...

I started a flat of grass pea seeds about a week ago. I'll probably move those to the cold frame tomorrow so as to make room for the next flat. I'd REALLY love to just pot those seedlings, but that would be inadvisable (it's warm enough for grass peas to survive directly , but they all still have their cots attached to them, and I know that, if I DO put them in the unprotected barrels that are their permanent home in that state, the squirrels and chipmunks will just eat them all. )

Flat #2 is a mixed flat. It has some winter melons, some horned melons, some sweet peas (regular and Andean) what's left of my white podded cow peas (I decided it's been too long since I regenerated those) a few lima beads (I'm doing the less important ones now, and will start the more important ones when and if those do OK)
You must log in or register to reply here.
Share:
Facebook Twitter Reddit Pinterest Tumblr WhatsApp Email Share Link