Mom was out cutting plants, pulling stakes and cages off the tomatoes and there were some green ones, but she just told me that she doesn't want to do anything with them. that is ok with me. we did plenty, we've thoroughly enjoyed eating them and putting them up, but when done it is ok to say enough and to move on. the worms will enjoy them too.

We finished cleaning & sorting all of the tomatoes harvested from the rural garden before the frost. After being stunted for half of the season due to intense weed pressure, the late tomatoes returned to their normal size. A lot of the green Czechoslovakian and San Marzano Redorta are in the 8 ounce range, as they should be... those were supposed to be my paste & salsa tomatoes this year. I did get get enough ripe ones for one 12-pint batch of salsa, though.

As expected, only about 12 Slankard's tomatoes were large enough to be worth keeping. Those plants were the last in the garden to be weeded, and were about a month behind where they should have been. Cleota Pink stole the show this year, but I wish Slankard's had reached its full potential. It is the largest tomato I grow. 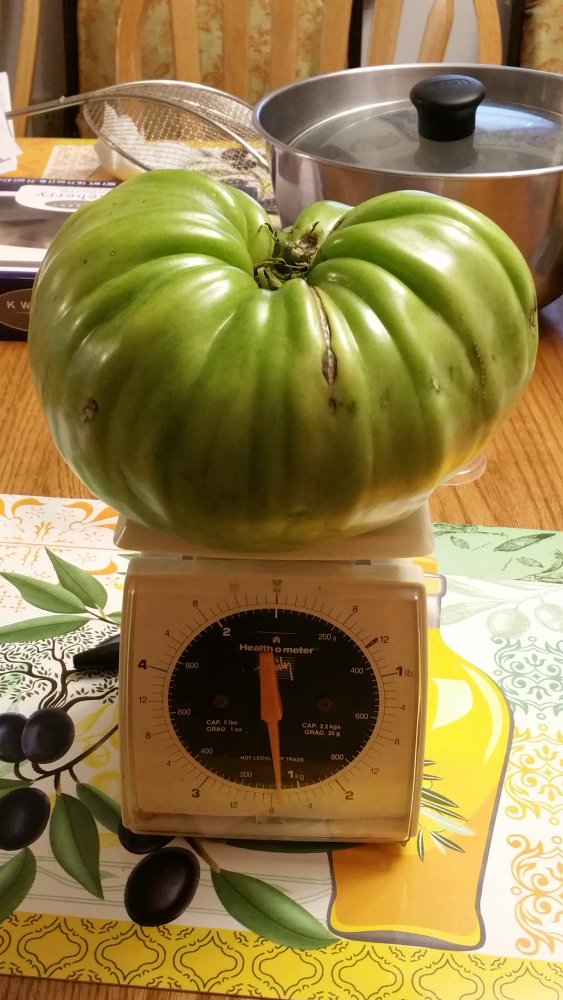 A few tomatoes ripened early but were bug bit, so at least I was able to save seed.

Wow! That's a BIG tomato! I bet it takes a long time to get it to that size. That's tough on the weeds, I so understand THAT! I do grow some bodacious WEEDS! Do you think maybe the green tomatoes will go ahead and ripen up for you?

A couple of the Slankard's are ripening. What was most disappointing is that they are basically over-sized oxheart tomatoes, with few seeds & great flavor... I looked forward to eating some sliced.

Zeedman said:
A couple of the Slankard's are ripening. What was most disappointing is that they are basically over-sized oxheart tomatoes, with few seeds & great flavor... I looked forward to eating some sliced.